When Ondřej contacted us for the first time, we didn’t know about the existence of the Bohemian Border Bash, and even less about the incredible place where it was going to be held. After taking a look at the official site of the event trying to find some information about the natural park that surrounded the spot, we were completely sure that we couldn’t reject the invitation.

Still on the plane on my way home, I try to do a recap of everything I lived during these four days in the Czech Republic, with the difficult task of not forgetting any detail or memory about this great experience.

From the first moment I stepped in the Saxon Switzerland National Park joined by Jambi and Stefan, whom I met on the train from Berlin, I was astonished and pleasantly surprised with everything we found along the small road leading to the park. At that moment we were riding with heavy loads through a deep forest full of huge trees, big rocks and a smell that days later still reminds me about pure nature.

After riding 21 kilometers, and with noticeable back pain, we arrived at the camp, where the boys from Chimpanzee Bars, including Ondřej (the organizer), welcomed us, and we were given the keys of the cabins where we would stay. Despite the fatigue we had accumulated, we were curious to know what the rest of the days would look like. Everything seemed to be amazing.

The sun rose and we were ready for our first day in this natural area. Only a few were brave enough to do the 300 km version (Big Bash), and the rest preferred to get to know the area a little more by doing the route of 75 km.

This route went completely around the natural park, all through forest paths and trails, except some short road parts that were used to connect one trail with another. It was an amazing landscape, a paradise to whoever loves mountains and nature. The Saxon Switzerland National Park is well-known for its peculiar rock formations, and we were able to have a good taste of that.

The track the organizers provided was like a maze, where you had to do some short loops around the area, and where you had to face some demanding climbs, although it couldn’t be tagged as a route with a lot of elevation gain.

Saturday was the most important day in terms of the number of people. More riders kept arriving during the previous day and there were a lot of us lining up for the 150 km route. The organizers insisted that it wasn’t a race, but everyone knows that whenever someone accelerates, our competitive inner side appears and everything starts to get messy.

The first part of the route went by the deepest area of the park if we talk about nature. It was, again, a maze of narrow trails surrounded by tall trees and shaped rocks.

After crossing the Elbe river with the typical ferry, we stepped into a location that, although wasn’t part of the natural park, was still a beautiful area. Inside a track network without limits, we spent a good amount of time linking the different villages around, all that accumulating kilometers until reaching the river again, where one of the feed stations was waiting for us. At that moment we were already 100 km in with almost 2.000 m of elevation gain, and we still had to go back to the camp, which was 50 km still to ride. 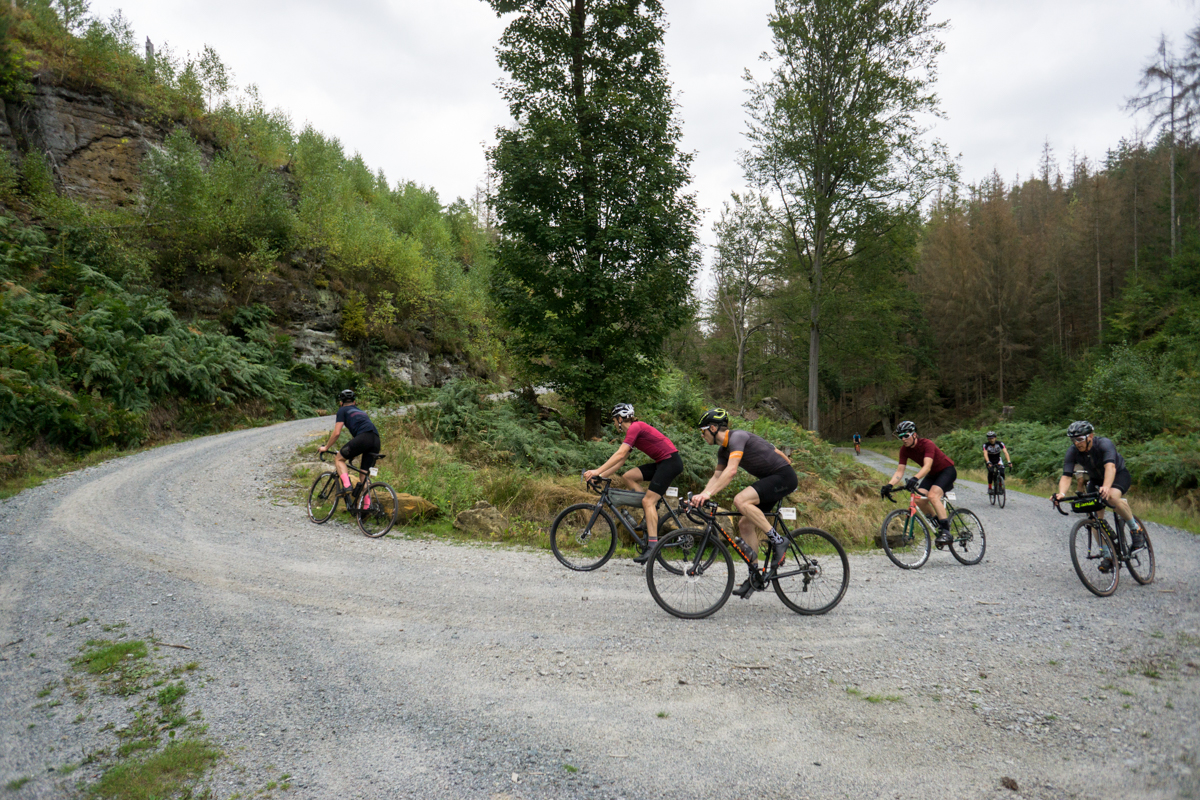 We jumped again on the ferry to return to the start area, and we quickly started climbing until we reached what fully was the central heart of the park. Fatigue was present in our bodies, but nobody wanted to throw the towel and everyone kept riding without stopping.

Finally, after over seven hours, we arrived at the camp with 153 km and +2.700 m in our legs. Satisfaction and tiredness felt equally at that time, but a good shower and a tasty dinner fixed it. To put the icing on the cake, the organizers prepared a barbeque and a big bonfire to conclude a mind-blowing cycling day.

It was the moment to start packing again. The first edition of the Bohemian Border Bash was coming to an end but we were leaving glad about the experience we lived, the number of friends we made and the wish to go back next year.

We loved the area where the event was held, a place where you can enjoy riding your bike if you have one but also hiking, because of the infinite options you can choose from.

As regards the organization, one should acknowledge the great job they did to make sure we just had to worry about riding and having fun.

To conclude, we would also like to highlight the help we receive from PEdAL ED, 3T, WTB, Komoot, Wahoo, and Ass Savers, among others, in events like this one. It wouldn’t be possible without your support.