Ahead of the public presentation of “I Just Want to Ride”, the film that narrates the story of Lael Wilcox racing the 2019 Tour Divide, we take the chance to reveal the conversation we had with her just after finishing the Silk Road Mountain Race.

Lael is one of the most special and inspiring people we know of, and you will know why after reading her answers.

Who is Lael Wilcox?

“I am 33 years old from Anchorage, Alaska. I didn’t really start riding my bike until I was 20 to get to and from work, with 6 km in each direction.

In a year, that turned into riding to the next city over, two years later riding across the US and progressing into bike trips all over the world. I’d work for six months as a waitress in a restaurant and save all of my money so I could travel on my bike for the rest of the year. During a bike trip in Israel in the spring of 2015, I realized a 1.400 km self-supported mountain bike race called the Holyland Challenge was scheduled while I was there. I decided to enter the race for fun and as a new experience. I was the only woman competing on my touring bike, a very inexpensive 8-speed steel hardtail. I had platform pedals, running shoes and a cotton t-shirt. Within the first day, I was leading the race by 40km. Everyone was very surprised and so was I. I realized this was something I could do, something I was good at.” 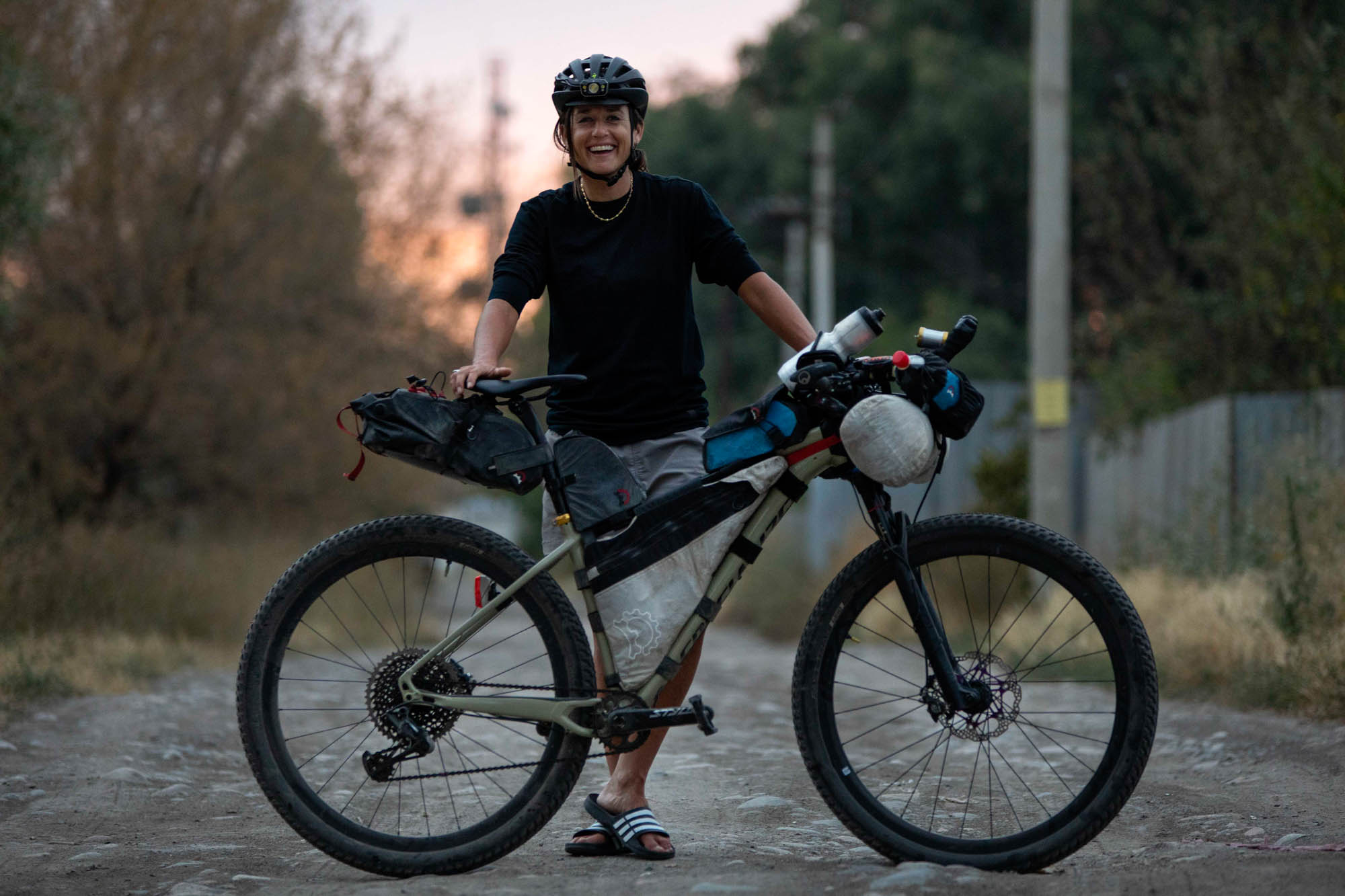 What is cycling for you?

“Cycling is so many different things for me; it’s transportation, exercise, fun, a way to see the world. It’s competitive and it can also be relaxing. It’s definitely something I want to share with others. I run a girl’s cycling mentorship program called Anchorage GRIT. We work with low income 12 and 13-year-old girls. At the beginning of the program, it’s a huge challenge for the girls to ride 12 km. Six weeks later, they’re riding a 100 km adventure weekend from their school out to the wilderness in Alaska. It’s amazing to see their transformation and their ability to take on challenges. Anchorage is my hometown and I would’ve loved to have an experience like this when I was young. It’s not about being the best athlete, it’s about doing your best.”

When did you start racing ultra-distance bike-packing races?

“After the Holyland Challenge race in Israel, I flew back to my hometown,  got a new race bike (a carbon Specialized Stumpjumper Hardtail) and a week later, I began my 3.400 km ride from Anchorage to Banff, Alberta, Canada to the start of the Tour Divide.

It was my first big solo ride and I completed it in 19 days. I’m from Alaska, but I had never traveled the road through Canada. I’d always just flown over to Seattle, Washington. It was really incredible to see this land from the seat of my bike, to ride through the Yukon. It’s so remote. Often, the only available food is from a gas station and you only find these every 150 km or so. After that ride, I rested for a week in Banff and then started with the Grand Depart of the Tour Divide. In that ride, I took two days off of the women’s record and set it at 17 days.”

Tell us about your first long-distance race?

“My very first long race was a 600 km road time trial in the summer of 2014. During that summer, I’d take my two days off from bartending and ride as far as I could. At the end of the summer, my best friend Christina Grande asked if I would race the Fireweed 400, a 400 miles (600 km) supported road race to Valdez, Alaska, and back. For this race, you are required to have a support vehicle. Christina said she would be my support and we found another friend to be the mechanic. I had no idea if I could even complete the distance before the 32 hour time cutoff.

I borrowed my mom’s road bike and went for it. I ended up finishing in 27 hours. I was the first woman, and the only person to beat me was a man on a recumbent bike. He finished 12 minutes faster than me. The biggest surprise was that by the end, I didn’t feel that tired. I knew I could go farther.”

Please tell us about some of the best highlights of all these years, your best results or your favorite races.

“In 2016, I outright won the Trans Am Bike Race, a 6.800 km self-supported road race across the US from Oregon to Virginia. I caught the leader in the final night at 3 am and battled him with 210 km to go. It was so exciting!

These races require a lot of focus and maintaining a high level of urgency for more than two weeks. This includes sleep deprivation; I usually sleep four or five hours per night. Despite all the sacrifices, I love spending all of my hours outside riding. It’s incredible to be that in sync with nature and the weather. It’s a very enriching experience.”

Which word describes best this style of racing? 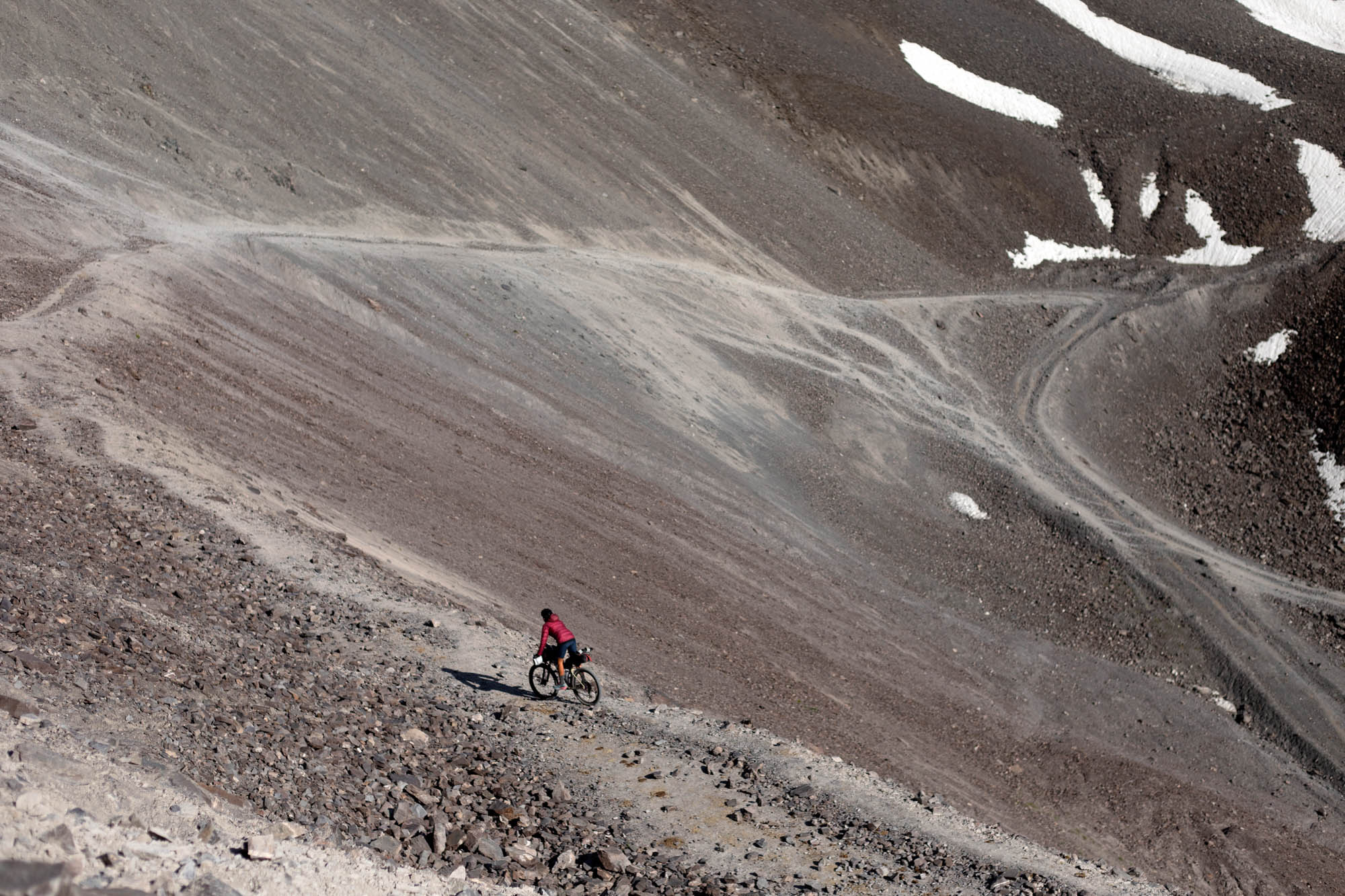 How do you train?

SRMR: What can you tell us about this race? How did you organize your rest and nutrition? Any anecdote of those hard days?

“Kyrgyzstan is exceptionally beautiful, with huge rocky mountains, fresh water, green pastures and so many lakes. A lot of the race was above 3.000 meters. I came to Kyrgyzstan a month before the race to ride some of the routes, acclimate and learn about the local culture. I figured it was such a long hard trip to come from Alaska (more than thirty hours in the airplane) that I might as well spend some extra time in the country to get to know it. I’m so glad I did.

The roads can be pretty tough. You definitely need a mountain bike with at least 2” tires to be successful here. During my race, it snowed more than half of the days. The weather was very unpredictable. While I was touring three weeks earlier, it was 40ºC most of the days.

I love riding alone and I didn’t feel lonely out there, but I enjoyed interacting with Kyrgyz horsemen. They live in yurts and are nomadic. They were very friendly and kind. They were always surprised to see me. Sometimes, they’d try to get me to switch my bike for their horse!

I mostly ate while riding. Sometimes, there wasn’t that much food available. Often I’d buy five pieces of Piroshki (fried bread filled with potato) and some Snicker’s bars and that would be my food for the day. If I came to a store with drinkable yogurt, I’d drink a large container before moving on. There is fresh water in most of the country, so the water wasn’t an issue. I think I’m the only racer that didn’t filter or purify it. I just drank it. I didn’t get sick.

Three of the nights I stayed in guesthouses. The other nights I slept outside. I had a sleeping bag, bivy and inflatable sleeping pad. I also had a down jacket and pants. I was plenty warm and comfortable.”

What is the situation of women in ultra-distance cycling?

“I think women are absolutely as capable as men in ultra-endurance cycling. The reason why we’re not seeing as many women winning races is that there aren’t as many women participating. This year at the SRMR, there were only 9 women out of 140 racers. Participation-wise, it is still a very male-dominated sport. I would love to see that change.

So don’t let anyone tell you what you can or can’t do. Ride your own ride and see what happens. You might surprise yourself.”

“I Just Want to Ride” is now available on Youtube. Go and check it out! 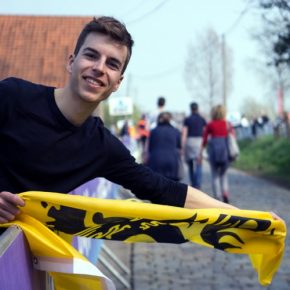 Graduated in Business Sciences, Javi tries to compensate for his obsessive passion with data analytics with the relaxing action (that's what he says) of creating content for the magazine. View all posts by Javi Angulo

The Service Course begins a new stage of its life, that will be accompanied by an expansion to countries such as Norway and the United Kingdom and other great news that they will release during the year.