With the spring, the great cycling classics come, these races of one or two days which indicate the season start and warm-up the great professional cyclist tours.

They are races known for their hardness, distance, difficulties and above all, for the great emotion that they bring to the spectator. Each of these races has their peculiarities in terms of path and field, which allow riders who, in stage races work for others, to have the opportunity to stand out and make history.

The Ronde Van Vlaanderen or, better known as the Tour of Flanders, is undoubtedly one of the star races of the season. It takes place in one of the areas of Belgium where historically has had (and still have) a great prominence and where it’s not only followed by fans of this great sport, if not also, by people who, despite not practicing it, see this event as a great regional festival in which entire families go out to the streets to cheer, the roads and villages are decorated from top to bottom, and you find celebrations for all in order to encourage the riders and enjoy sporting spectacle.

Although Belgium is known for being rather a flat field, the most outstanding feature of the Tour of Flanders is that, part of the route passes through an area of small hills that some sections are cobblestone roads with steep slopes and which are known as walls (Muur), these cause a peak of intensity and effort to push any cyclist to the limit.

As in the majority of classics, there is a cycle-tourist version of the race in which amateur cyclists have the opportunity to live the experience of participation in a race like this. 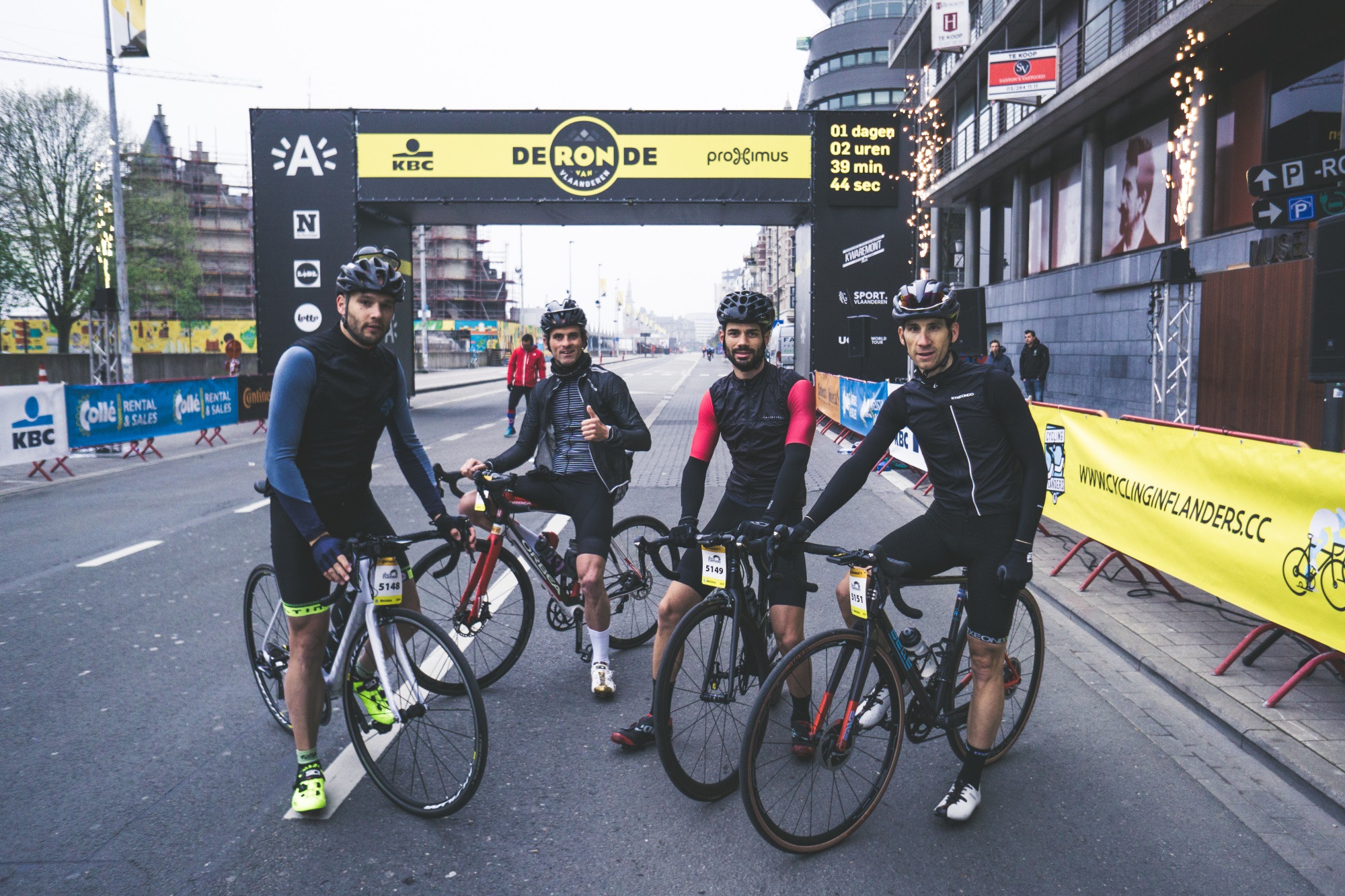 In our case, we really wanted to come to Flanders to enjoy a great weekend full of cycling and, as we did a couple of years ago at the Paris Roubaix, we decided to take part of the Ronde Van Vlaanderen Cyclo and know first-hand the harness that these “walls” hide.

The longest version of this race is 229km, in which we find several sections of authentic Belgian cobblestone, and 16 walls including some famous as the Kapelmuur, the Oude Kwaremont or the Paterbert, where we could live great moment of cycling.

We started from the center of Antwerp, the first hours pass quickly you drive on flat roads without circulation, so you can reach a good pace. Up to km 70 start some gradient and before reaching km 100 you have already tried the first pavé segment. At this point, the first amazement faces came among the participants due to the hardness of the path. A few kilometers later you start with the first walls but the real race starts at km 170, 60km before finish line, when it starts the most demanding part and the toughest sections of the route, although the euphoria and the spirits of people pass on you and make you forget the pain and fatigue and surpass one by one each meter without looking back. It was an authentic experience.

Finally, highlight the organization behind these cycle-tourist races, the great job they do and they are always at the top level, facilitating all kinds of services to the riders and with great participation (in this edition we were, nothing more and no less than 16000 people).

Even with the tiredness hangover on our legs from the day before, we woke up one more day and headed to one of the star areas of the race and one of the most awaited walls by the spectators, the famous Kwaremont.

Despite a large number of spectators, we could find some space to enjoy the first pass through this point (in the race they pass more than once for this same section before finishing the race). As happened to us in Paris Roubaix a couple of years ago, we were puzzled to see how they climb the walls and still keep forces to launch continuous attacks with the intention of breaking the bunch and face to the final of the race.

After the first pass to this area, we decided to change the location and try our luck with Paterberg, the last wall before the finish line and through which they would also pass, at least once more. 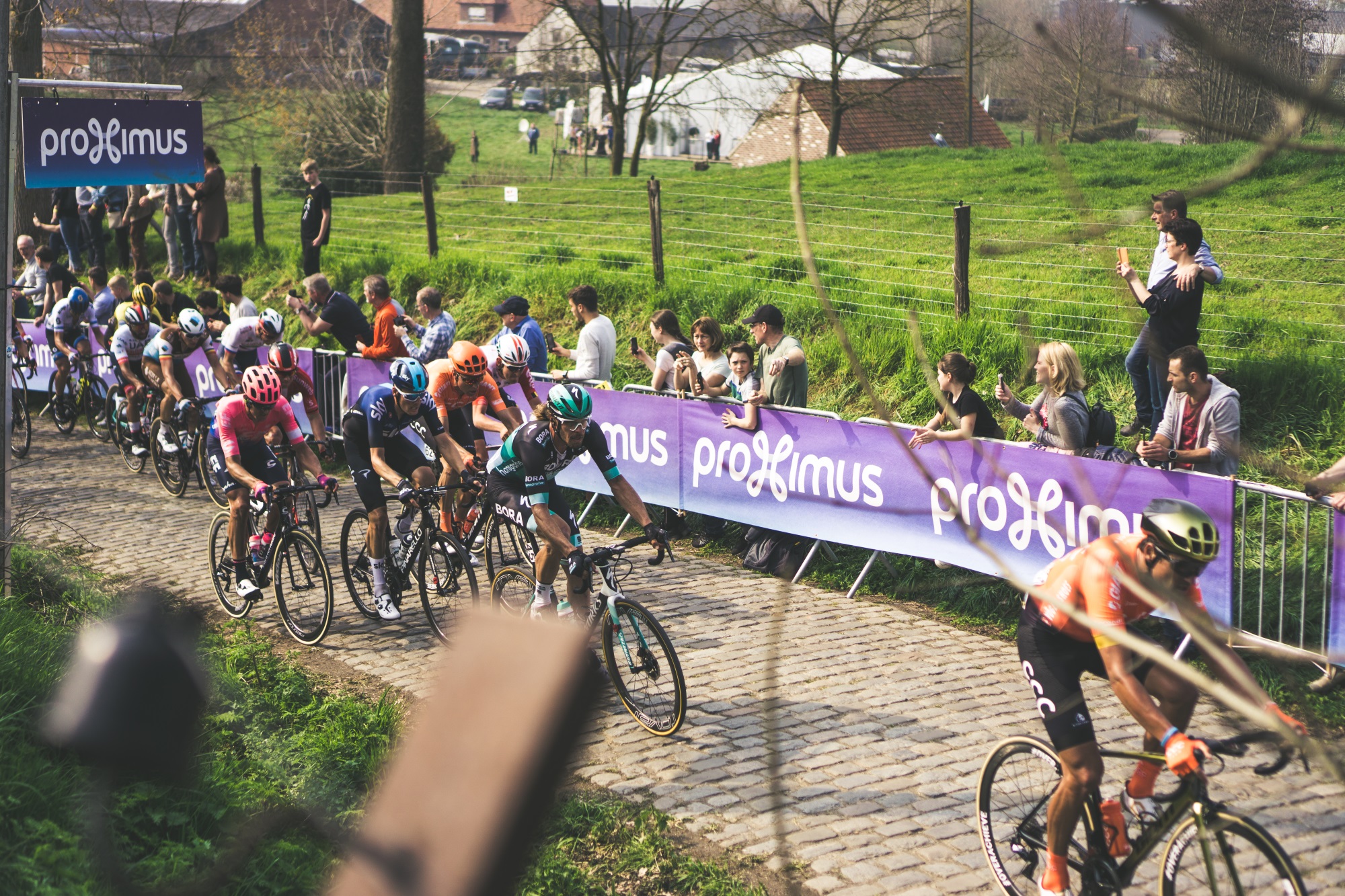 We had great luck and we got a good place just at the beginning of the wall, where we could enjoy all the show that, both men and women, gave us in that harsh area with slopes of up to 20%. Of course, we saw first of all Alberto Bettiol, of Education First, fighting against his head and the pain of his legs, climbing that though segment as if there were no tomorrow. Speechless.

There is no doubt that every cycling race is exciting but the great classics have that special magic that joins amazing fans, the hardness of each race and the uncertainty of not having clear favorites, it’s a classic, so everything can happen.

These days, we can see on social media that there…

Whether browsing the internet for a brand new bike or…