During the lockdown, with no chance of going outdoors for a ride like it happens in many countries – as of today it is forbidden to leave the house to train in Spain, Italy or France -, the relation with our bike is mainly about reliving past adventures and planning those that we are willing to complete when, at last, we will be able to practice the sport we love without putting our integrity and those of the others at risk.

Starting to plan itineraries for future trips is always a good option to take advantage of these days of confinement, we for our part have thought of remembering some past experiences, which fortunately are not few. While we were reviewing these routes, a melancholic smile appeared on our face, reflecting conflicting feelings when we saw how much fun we had at the time

We have traveled far away but we have also made the most of the closest territories to our zone, which has made us understand the beauty hidden in every part of the world, and makes all present and future sacrifices worth it if in the end we can go out and enjoy like we used to. 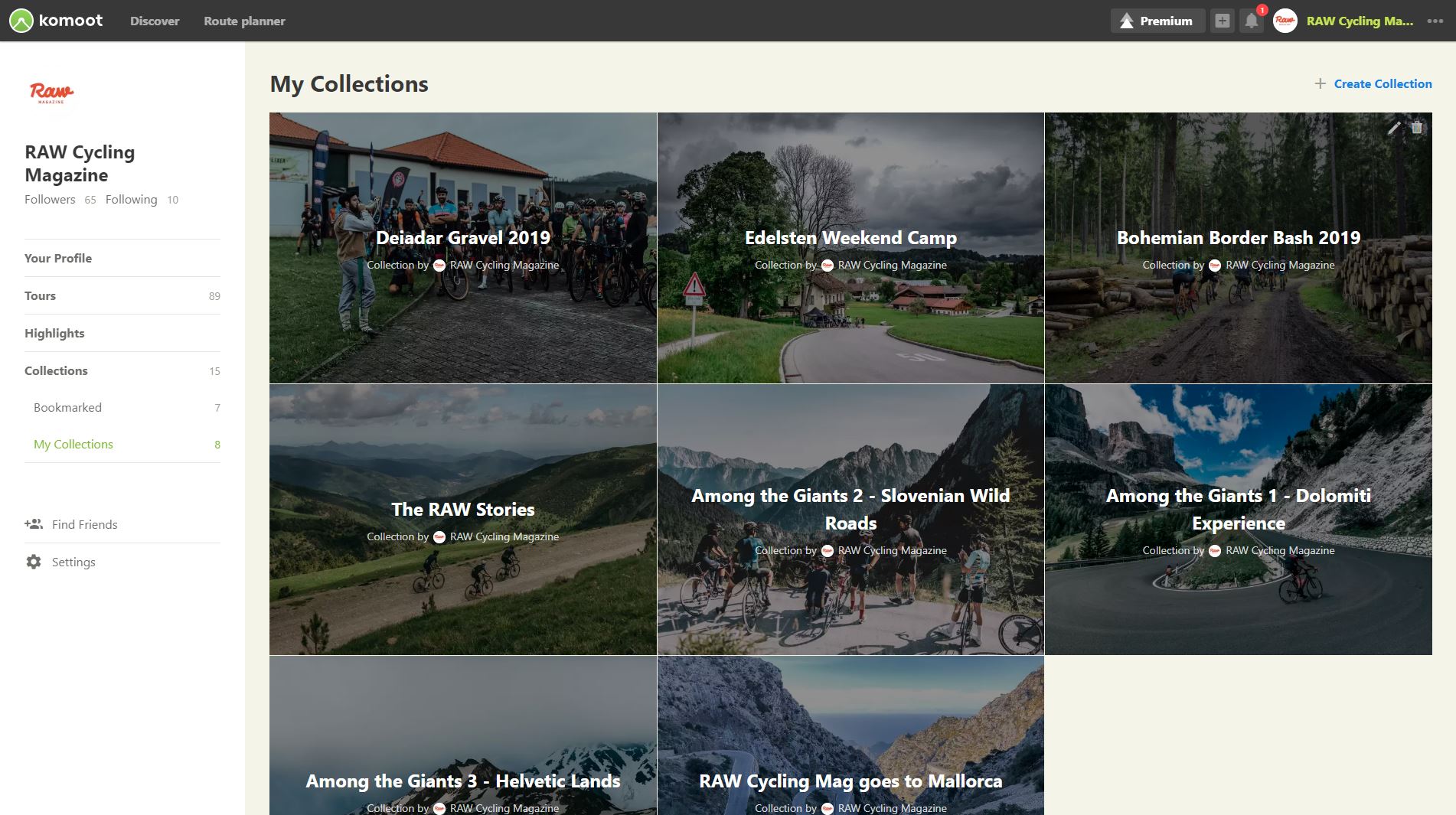 The various routes are grouped in collections that you can find in our profile on Komoot, the planning, and navigation tool that has just launched its Spanish version, which is excellent news for all our Spanish readers. During the last months, it has also come to life in French, Italian, and Dutch. We encourage you, not only to visit the several links which lead to the aforementioned collections in case you want to replicate them in the future but to explore all the features of Komoot and master the tool to make the most out of it once it is possible to ride outdoors again.

At the start of last November, we escaped a few days to disconnect from our daily routine, choosing Mallorca as our destination, and in less than a week we could see and ride through all the highlights of the place. Although the reduced dimensions of the island enable going by bike from one end to the other in one day, we hit right in the nail by choosing a centric location like Alaró from where to have access to the Sierra de Tramuntana but also the inland flat roads.

We are not explaining anything new to you if we mention how spectacular Sa Calobra and Cap de Formentor are and, although the amount of cycling practitioners that has never ridden his bike in the Balearic Islands is getting smaller, we let you check the compilation of tracks we completed so that those who go to Mallorca for the first or the tenth time can follow them because they include some secondary and not as well-known roads that some locals introduced us to. In total, 498 km with 7.200 m of elevation gain.

The best moment to ride your bike on the island with no busy roads or loads of people is from the start of October until the end of March, avoiding the groups of cyclo tourists than land there since the start of April and the subsequent summer season.

Among the Giants (ATG) is the project that best defines us; we bring together a group of people that share their passion for cycling and we take them to one of those places that leave a mark, conquering mythical climbs and others as spectacular though not as well-known. 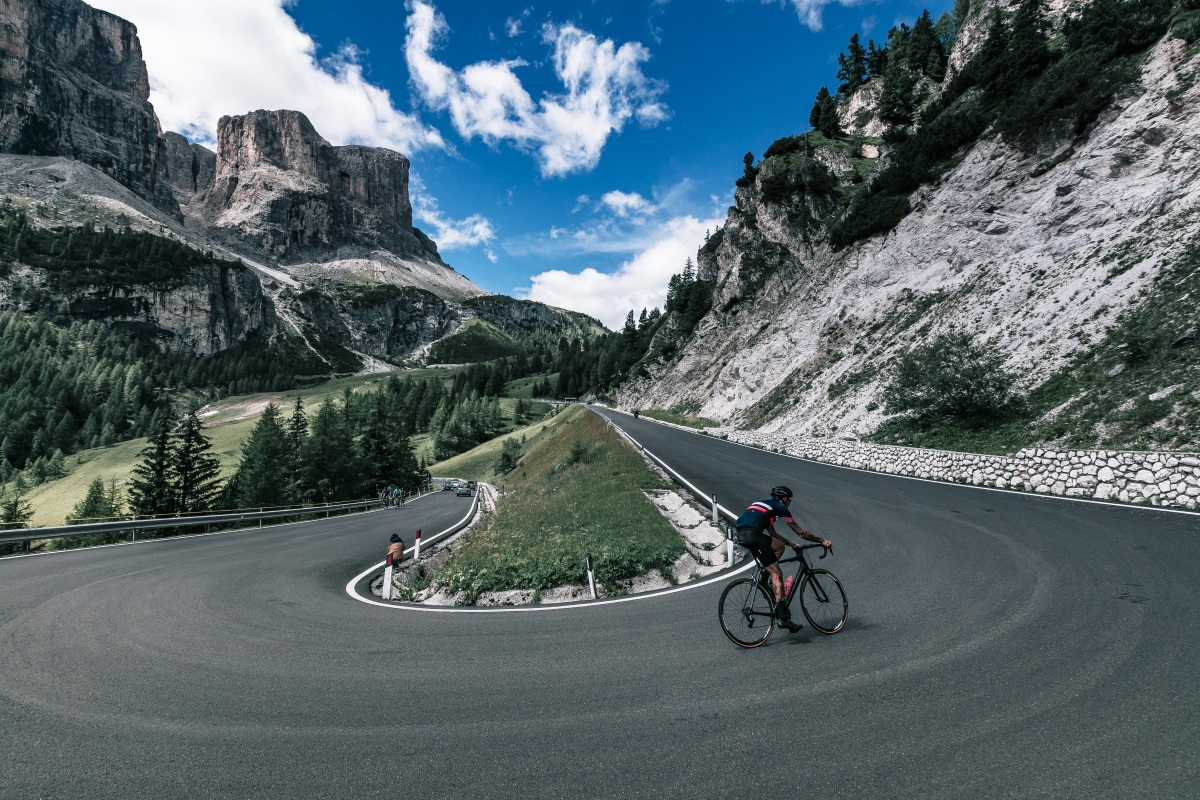 The first edition was in the Italian Dolomites. We set up our basecamp in Santa Cristina Valgardena, close to Bolzano, and in just three days we reached the summits of the Passo Sella, Pordoi, Giau, Falzarego Gardena, Valparola, Campolongo and Alpe di Siusi. No stone was unturned! In total, 274 km with 7.900 m of elevation gain.

If you want to be on the safe side and avoid the risk of not having access to all the mountain passes due to traveling to highlands during the colder months of the year, follow this itinerary in August as we did.

The second year, after several days considering various locations and taking into account their roads, climbs, and variety of routes, the chosen destination was the northwestern part of Slovenia, in Central Europe.

This time we progressively completed tougher rides, getting close to 3.000 m of accumulated elevation a couple of times. The first day we completed a route around lake Bled and we had the chance to get to know the Slovenian version of Mortirolo. The second day was not a round trip, we took advantage of a change in accommodation to plan a route from Lesce to Kranjska Gora, climbing mountains with unpronounceable names along the way. The Vršič and the Mangart should be, without any doubt, on your list of places to visit as soon as possible.

In total, 387 km with 8.100 m of elevation gain, including a brief incursion in Austria for those who were returning home later and could squeeze in one last ride. 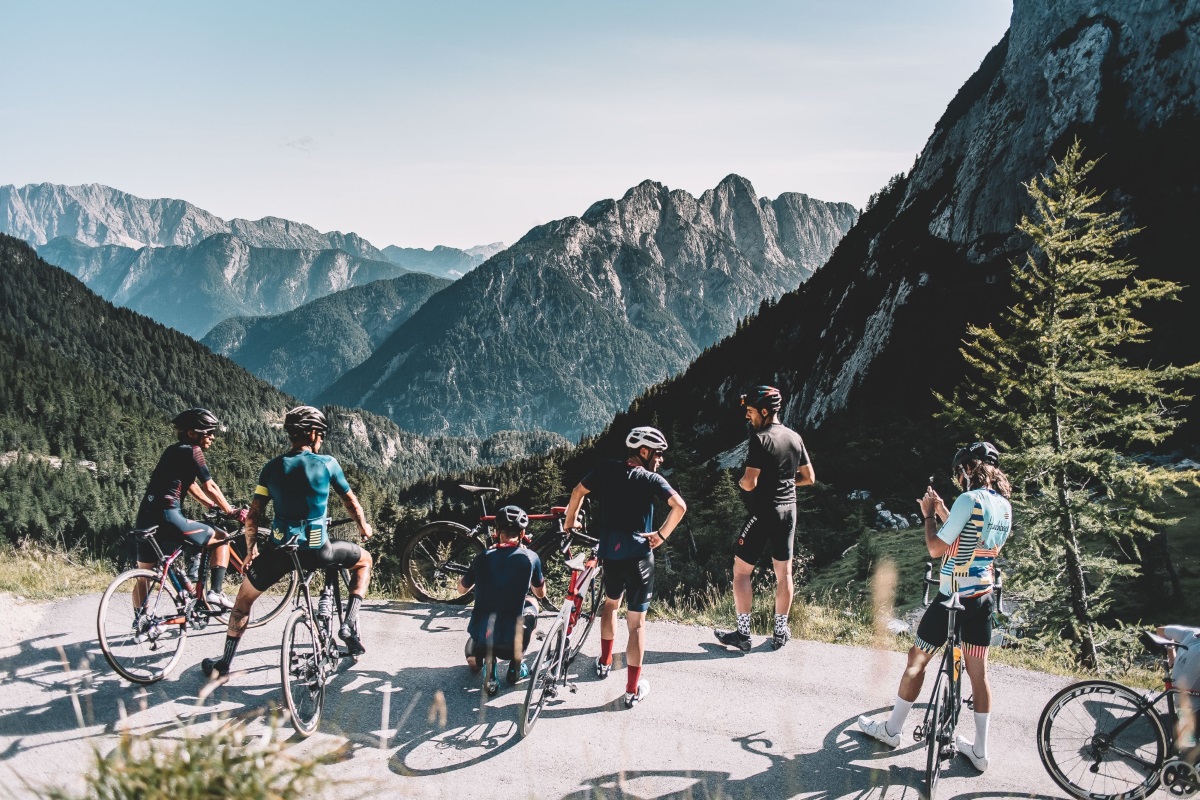 The most recent edition of Among the Giants took place around in Switzerland and, specifically, in Andermatt. This is an ideal location to visit some of the best-known mountain climbs of the Helvetian country like the Furka and Susten Pass, or the famous Tremola San Gottardo. Unfortunately, the snow season of 2019 lengthened more than expected, and the weather and the conditions of the roads changed constantly, so we had to spend a good amount of hours in front of the screen replanning the tracks we initially drafted on Komoot. Despite the various setbacks, we could enjoy some amazing days in Switzerland, a truly unique experience of discovering high mountain roads.

In the collection, you will find both the completed routes and the ones we initially designed before flying there so that if you go and encounter better weather conditions, you will be able to make us jealous by seeing the famous Belvédère hotel when climbing the Furka Pass.

The routes we were able to complete accumulated a total of 409 km with 8.900 m of elevation gain.

At this point, many of you know about our The RAW Stories project, but as an introduction to whoever doesn’t know what are we talking about, let us present it to you. Three years ago we decided to stop competing and instead focused on enjoying the time spent on our bikes from another point of view, exploring, rediscovering areas around us, and living adventures with our gravel bikes. Both in the official site of the project and inside the collection on Komoot you will be able to find the details about each experience.

You will not only discover one-day routes on our profile but multi-day rides too, in addition to some gravel races and even a journey across the Pyrenees we completed in August 2018, in which we overcame several climbs that have appeared so many times in Le Tour de France or La Vuelta a España. A lot of people recommend this itinerary to whoever wants to prepare for upcoming ultradistance or bike-packing events, and so do we because these adventures are the best learning method to know how our body and mind behave after long lonely days on the saddle.

As soon as the situation improves, we will resume these varied events and we will get back on track to accomplish our goals for this year.

Some days ago, between September 5th and 9th, we gathered…