Year after year, the number of cyclists who get into long-distance is higher, whether it is going on a long ride during the weekend, or connecting several stages on a trip. With no doubt, there is a huge step if we consider ultracycling races, in which only the most intrepid are willing to participate. Thinking about the Spanish scene, names such as Julián Sanz for his many personal challenges pop into our minds and, among them is Carlos Mazón.

After a chat we had with Carlos, in which he told us a bajillion stories, we realized that his passion for cycling goes beyond being successful in racing. For him, the bicycle is a means of transportation that allows him to travel and live adventures to challenge and push himself, be in harmony with the environment, meet people, and enjoy the journey as he pedals.

The passion for cycling was something gradual. Everything started as a means of transportation through the city, in particular Bilbao, a city in northern Spain in which he lives. Little by little, he started traveling to explore his surroundings. Beginning with the Vasque Country and all those villages, climbs and mountains he did not know, he gradually got further away. For those longer trips he was planning, like the Camino de Santiago or the Via de la Plata, he began training and set more challenging feats. Searching for routes to go and discover new places he came across TransAm in 2014, in which he participated in 2015. The year after he attended the TransContinental, finishing third. From that moment on he was hooked and he has participated in other races such as the TransIbérica 2018 (1st), Three Peaks 2019 (2nd), or Atlas Mountain Race 2020 (7th). 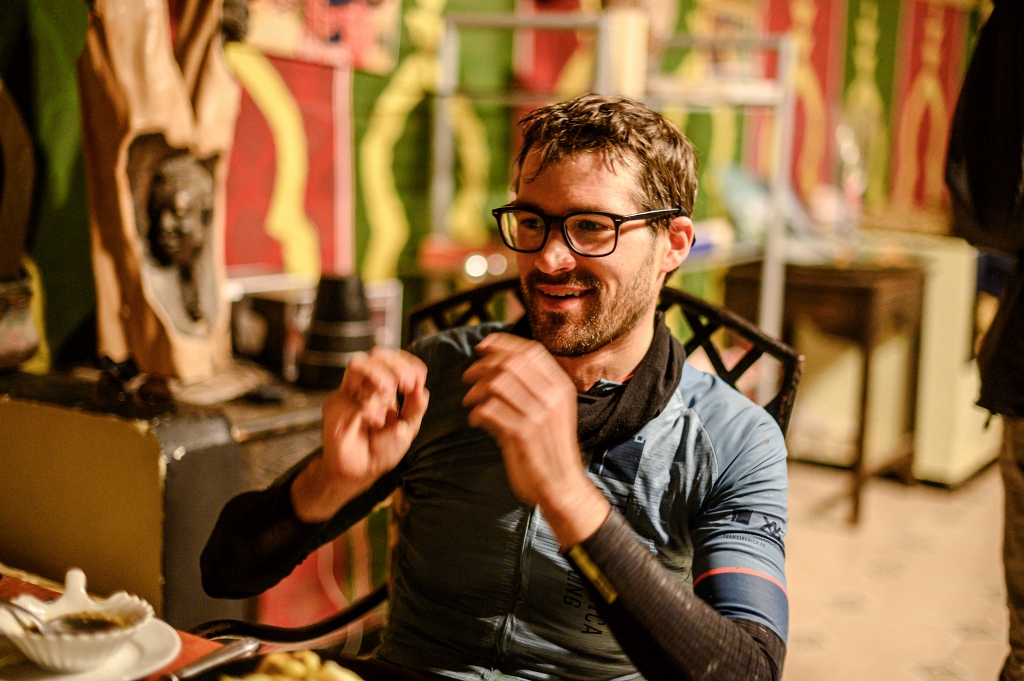 From all his experiences in ultracycling, and considering that there were no such competitions in the Iberian peninsula,  David Rodríguez and him decided to organize an event called TransIbérica. The first edition was in 2018, and with barely 10 participants who toured around the peninsula, the result and acceptance of the riders were very positive. The event started expanding and it was repeated the following year. Moreover, they organized a new race, the TransPyrenees. This year 2020 could not be less, and a new challenge with gravel bikes will take place, Badlands, in addition to the other two competitions. However, they will be compacted in the calendar to the end of summer due to the global pandemic. Will any brave rider participate in all of them?

Aside from being a competitive cyclist, Carlos is a strong promoter and advocate for the bicycle as a way of getting around. For instance, he went to Madrid to get a bikefit done and did the whole round trip on a bike from Bilbao, more than 400 km in a straight line on each journey. Furthermore, he is involved in local initiatives such as ConBici in Bilbao that promote urban cycling.

Being 26 years old, Carlos considered the possibility of visiting a new country and, at the same time, living a unique experience by participating in the TransAm 2015. His objective was clear, finishing the race by riding 300 km each day. He was going to do his own race without paying attention to the others, setting his own pace. In the end, he ended up traveling 20 days with an average of 330 km daily. What he was not expecting was to finish in such a good mental and physical state.

Being his first race, he saved energies during the whole race, and in the end, he was able to push ending up in 2nd place. Nevertheless, he was penalized because he did not follow the track in some segments and he went without a tracking GPS, which battery had damaged. He only had some paper maps and, half-way through the race, the cell-phone memory card which contained the maps broke, he could only follow an imaginary line. Once he got closer to the finish line he overtook the second place contenders and, despite his final position not being recognized, it was a great experience of learning and getting to know himself.

For the TransContinental he prepared himself much better and finished in 3rd place after battling for the 2nd one. He managed to daily ride 380 km with an average ascend of 4.600 m, all of that during 10 days and just 18 hours of sleep. These are stomach races in which one must be able to constantly replenish all the calories that are spent. His strategy was to enjoy the trip and, for that, he designed a track passing through some charismatic places that acted as reference points of his own. Being such an open route with just a few checkpoints he realized that other riders were capable of cheating, like going through highways or having a secret support car. Thus, with the intention to improve that and organize a race in Spain, the idea of TransIbérica appeared.

In 2018 the first TransIbérica was organized, with a route around the peninsula that has its name. Having a small number of participants, Carlos also participated. Being part of the organization represented no advantage since the checkpoints had been public for months. On the contrary, there were moments that were detrimental because he had to take photographs, he cared about the riders, and he had to take organization decisions. During a point in the race, he lost more than 4 hours attending calls and a storm in Andorra. Like the rest, he had no external help, and he knew the region as any other Spaniard who has traveled. In the end, he finished first, but the position was not relevant since the prize you get is not material but the experience of the journey.

The Atlas Mountain Race at the beginning of the year was the first gravel race he ever attended, but it was not what the participants were expecting before getting there. Advertised as a gravel race he pushed the pace on the start to get some distance, but after some kilometers, it turned to be terrain for mountain bikes, and that changed everything. The gravel bike he rode would not allow him to ever relax and he had to walk the bike for dry rivers through more than 35 km. Besides, food and water were scarce (a few cans, bread, sodas, olives, cheese and sweets, he lost 5 kg). He was lucky he had some milk powder and oats with him that acted as breakfast and dinner for two days. As he says, it was a misery race.

He had been competing for 2nd and 3rd place until he got to the last checkpoint, wasted. The frustration for being unable to show his full potential and the bad choice of material and food invaded him and he disconnected from the race, only thinking about the finish. At 50 km from the end, a huge sandpit overwhelmed him. He stopped for half an hour under a shadow and he fell asleep while sitting up. He was angry when he got to the finish, but at least there was food and, oddly enough, his glasses were there, which he had lost at the start of the race. He finished 7th but that did not matter. He was hurt and full of bad sensations. It was a race about learning that, with time, you see from a more optimistic point of view. For the next one, a full-suspension MTB and tones of dehydrated food.

For this year he was considering Torino-Nice and Two Volcanos. The first overlaps with Badlands, and the second one will depend on what his shape is in autumn. These are shorter races, around 2.000 km, and though they might not be as demanding they require a better level of fitness. In a 5.000 km race the physical shape is not as limiting, but in a shorter one focus must be constant. The organization of all the TransIbérica races takes a lot of time and responsibilities. Most likely, he will do the TransPyrenees (round-trip) to check the state of the route, and some parts of Badlands again. Hence, the rest of the year will be a moment to enjoy and start thinking about new goals.