Last weekend (1st-2nd of February), the Cyclo-cross World Championship took place in Dübendorf (Switzerland). Even though we could not witness it in person, we did not miss any of the races in which the best riders of the world competed for the world title. Since the circuit was located in an airbase, the course was practically flat, switching from grass to tarmac sections. Aside from a couple of hills and an off-camber section, there were no natural obstacles. Therefore, a staircase and some flyovers, besides the typical barriers, were added to the course.

The first race of the championship consisted on the first-ever world title in the junior women category, which indicates the aim of gender equality, as well as an increase in the popularity of this discipline. The Dutch Shirin van Anrooij won the title, being the first woman in history to receive the title. The under23 men category was also won by a Dutch rider, Ryan Kamp, who crossed the finish line with a comfortable gap.

On Saturday’s last race, the elite women delighted us with a mesmerizing show that captivated us till the last lap. A group of three Dutch riders (Ceylin del Carmen Alvarado, Annemarie Worst, and Lucinda Brand) dominated the whole race from start to finish. On the last lap, Brand could not keep up the pace and got dropped. It was in the final sprint to the finish line that Ceylin and Worst fought elbow to elbow. In the end, it was Ceylin who crossed the line first raising her fist to the sky. Worst was second and Brand third. The development of this race was no different from the rest of the World Cup, in which victories and podiums have been shared between the three riders. However, with this victory, del Carmen, who is only 21 years old, confirms her superiority and regularity in the top category. Even though Worst had won all the sprints to the finish line to Ceylin (except one in Brussels), this allowed proving that not only is she capable of winning for her technical abilities but also for her explosiveness power on a sprint. 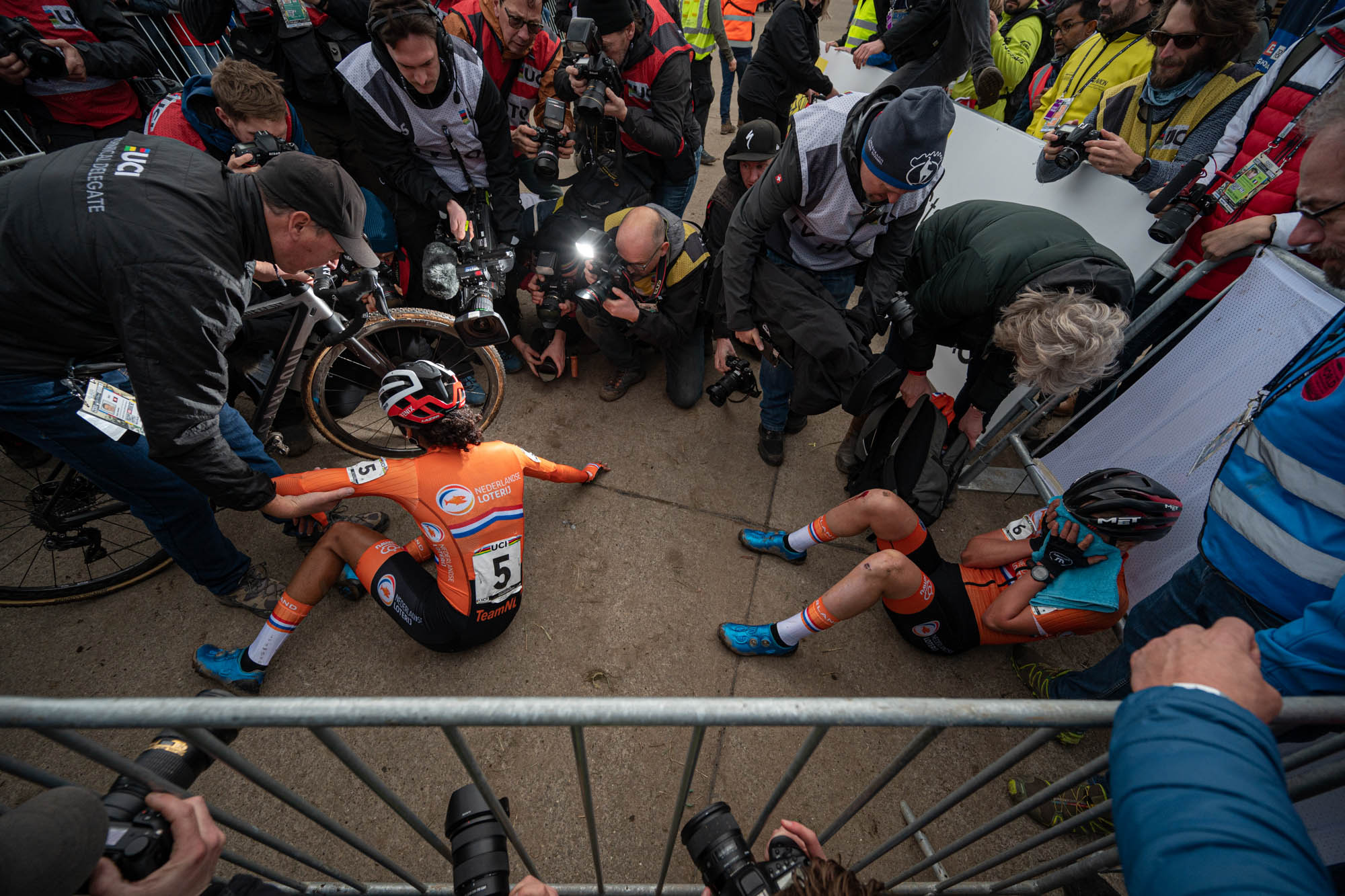 On Sunday the course drastically changed. What used to be grass was now mud, since a storm with pouring rain and strong winds settled on the course. In the fourth race of the championship, the Belgian junior rider Thibau Nys (son of the cyclocross legend Sven Nys) won over his countrymen, breaking the Dutch winning streak. We should keep an eye on him in the near future races since he will be a real contender for sure. Next, it was time for the under23 women who, with del Carmen in the elite category, had a chance to shine. This time it was someone not from either Belgium or the Netherlands who won, the French Marion Norbert Riberolle.

The last and more expected race of the weekend, elite men, stood out for being the one with fewer riders. The national teams were cautious and only brought their stars. Although the best in the world were participating in this race, the victory was practically decided from the start. Unlike other races, the Dutch Mathieu van der Poel went full throttle from the beginning with a clear objective in mind: the victory. The Belgian Toon Aerts could just hold on to his wheel for half a lap when he retreated in front of the power of The Flying Dutchman and an even muddier course. The fight for the silver and bronze seemed to be a matter of Belgians but, in the midst of it, there was Tom Pidcock. In one of the laps, he decided to attack and, among the confusion, he launched like a rocket. The British rider, still able to compete in the under23 category, kept on a constant pace and managed to split away from the group.

The unstoppable van der Poel crossed the finish line first, allowing himself to stop and bow for the offered exhibition. With this win, he proclaims his dominance on the world ranking and repeats the world title. Next was Pidcock, who surprised everyone with a well-deserved second place. He had a very rough crash last August in the Tour de l’Avenir, which prevented him from racing for some weeks. He preferred to miss some World Cups and to focus on the second half of the season. He was back in Tabor, where he finished 14th. In Namur, he missed the podium by only one place, and the medals kept avoiding him for the rest of the season. However, the World Championship was his time to shine. The British were aiming high and, even though this second place was a total surprise, it was not strange to find him battling for the first positions due to his technical ability and superb strength in muddy conditions. Aerts was third. He has been on the podium of almost all the races of the season, although without as many wins as last year. We should not forget about Wout van Aert who was next to cross. His performance has been improving for the last races, showing us that he is back after that terrible crash in the last Tour de France. 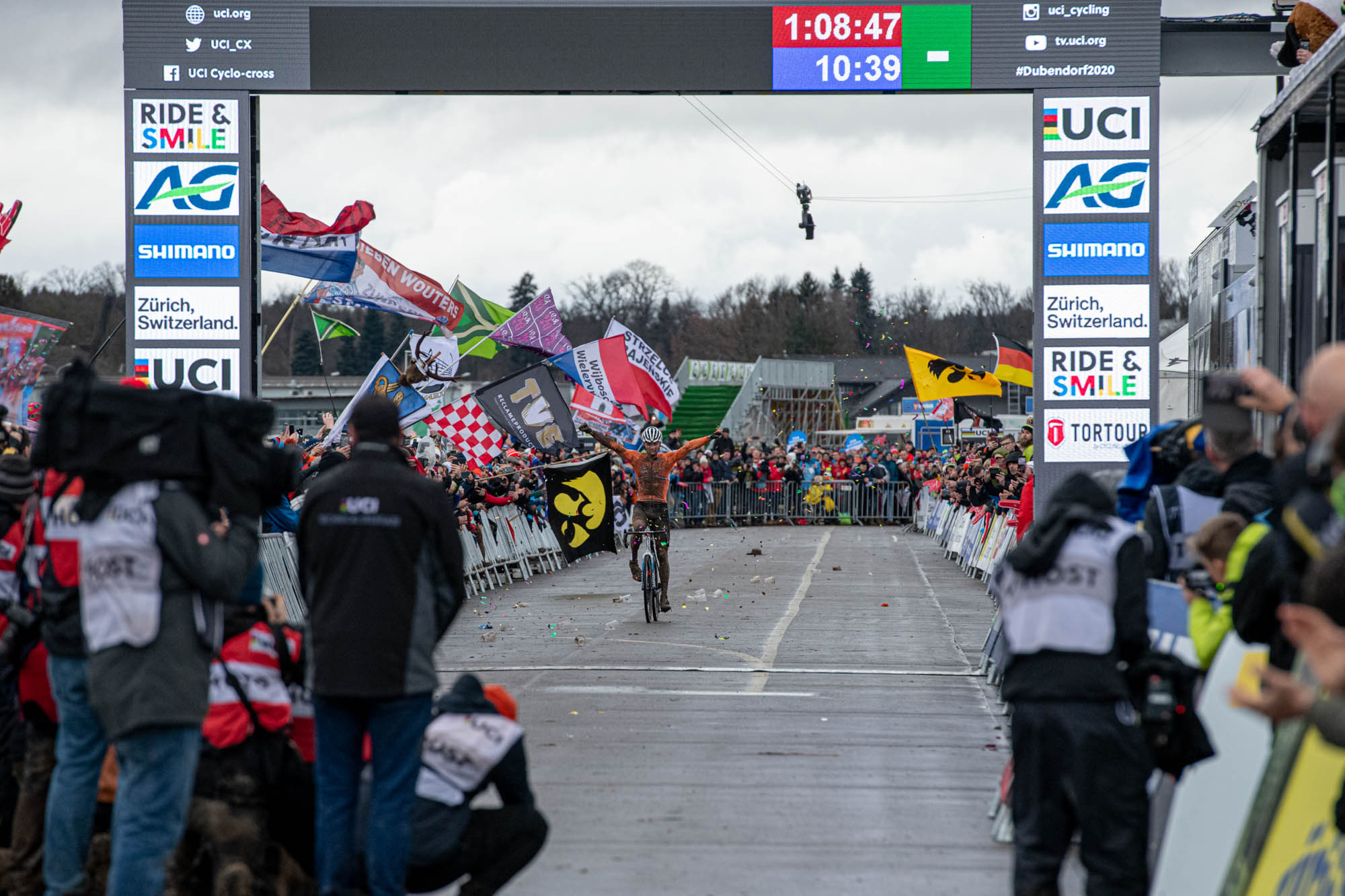 The first weekend of February 2020 will be remembered by many as a tribute to international cyclocross and a great ending of the season (even though there are still some races left as the Superprestige). Each one of the competitions was epic and each victory was well deserved. All cyclocross riders gave it all from start to finish, showing us their abilities and pure power.

The cyclocross racing calendar is concentrated in just over two…