During the first part of the year, Flanders is undoubtedly the place to be for anyone interested in cycling. The last races of the cyclocross season precede the start of the spring classics, and all that takes place in the Belgian region.

Nonetheless, not everything is about professional cycling, and most of us ride our bikes with the sole purpose of enjoying every single pedal stroke. There is of course a place for this type of cyclist in what is considered to be the cycling mecca, and the launch of the Flanders Divide is a good example of it.

Flanders at its finest

Flanders Divide is the first off-road bikepacking route that crosses the Dutch-speaking part of the country, from the east to the northern coast. One could think that Flanders is fully urbanized and flat, but most of the 560 km of the route is on unpaved terrain, including singletracks, smooth gravel highways, and even some hills.

While most cycling enthusiasts in Flanders follow some of the traditional cycling disciplines, one can also feel the rise of gravel as another valid way of exploring new places with a bike.

The guys from DirtyDropbars have been exploring the entire country and neighbouring regions on their gravel bikes for several years. They wanted to let others know about what Flanders has to offer, and in collaboration with komoot they created this route.

The 358 waypoints contained in the final version of the route are a clear indicator of the planning required for a track of this distance, following unfrequented ways and including sections that not even the mountain biking option of komoot suggests you to follow.

The curators of the route

Over the past year and a half, Jochen and Nils have checked parts of the route themselves as komoot’s ambassadors of gravel in the region. Nonetheless, it is impossible to be aware of the current state of the roads and trails that the Flanders Divide goes through, as there can be parts under construction or paths that are no longer accessible for cyclists. By checking the photo content they created during those exploration rides and then doing the Flanders Divide ourselves, we could see how the landscapes change throughout the year, with green fields where a few months before there was nothing but fallen leaves. 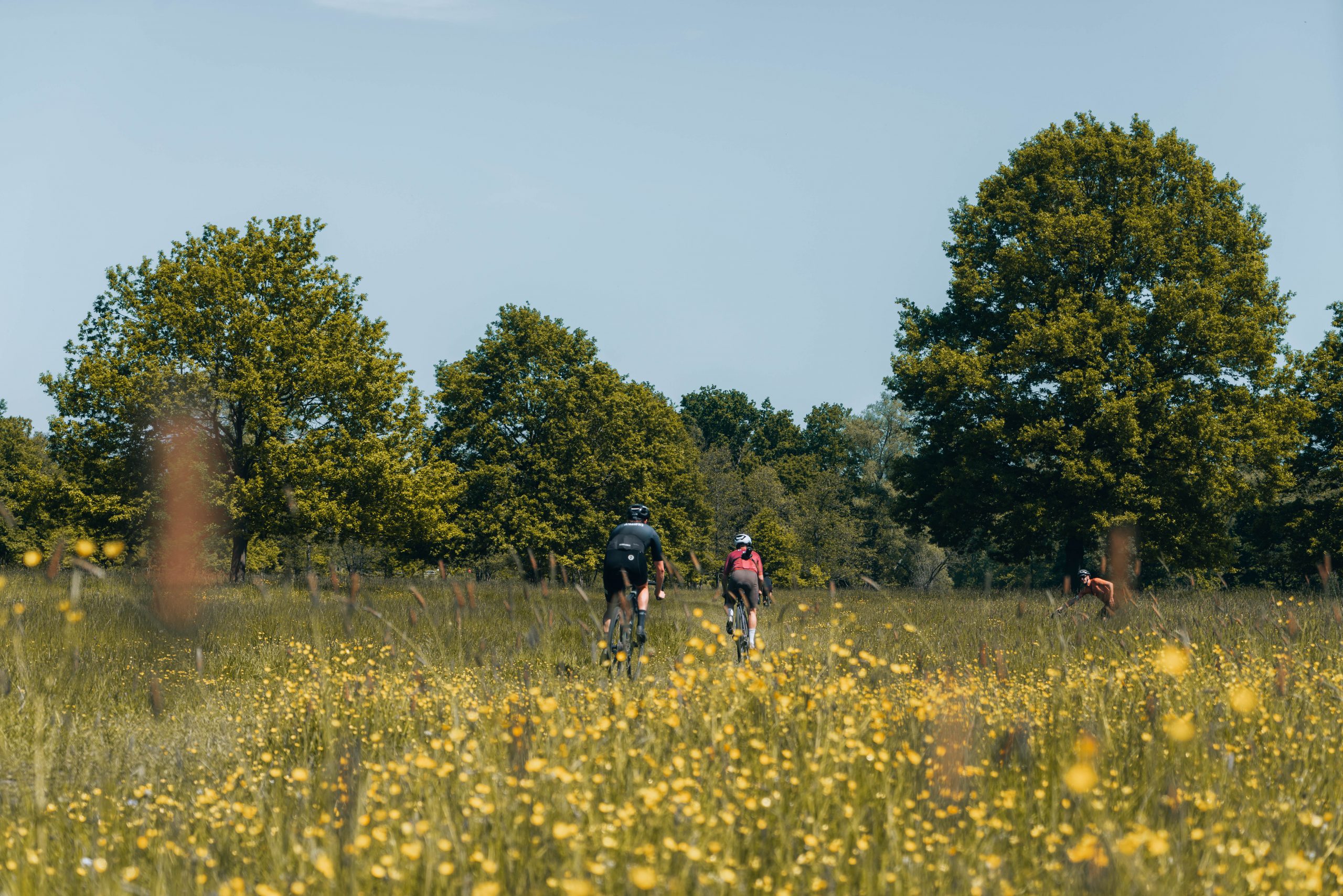 We were invited to the launch ride two weeks ago. We did 300 km in two days, starting from Hasselt with a planned finish in Halle, slightly beyond the halfway point of the full route.

According to the surface indicator of the route planner, the segment we were going to cover was 60% unpaved, so a bike like the Ridley Kanzo Fast was perfect to ride at high speed in the tarmac and compact gravel sections, and still be in full control when the terrain became tougher. Unlike the Ridley Kanzo Adventure and most true bikepacking bikes, it does not have mounts on the fork. However, a handlebar and a saddle bag were enough to carry our food, tools and camping gear.

Just a few minutes into the Flanders Divide we were already immersed in the Hoge Kempen national park, a place shaped by its past as an industrial mining and gravel extraction site. After mining was abandoned, nature did its job and now this place features some hills coming from the old spoil tips, sandy sections, and scenic views.

We spent most of the first day riding the top gravel paths and roads of Limburg, first heading north to pass by some must-visit places like Fietsen door de Bomen, and then crossing the Albertkanaal, heading southwest until we reached our destination.

For this launch ride, we spent the night in a cosy tent that the organizers had set up for the occasion, using the sleeping bags and sleeping mat we carried with us. With no running water nor electricity, it felt like a true bikepacking experience, and the weather allowed us to enjoy a warm evening outside and sleep quite comfortably. 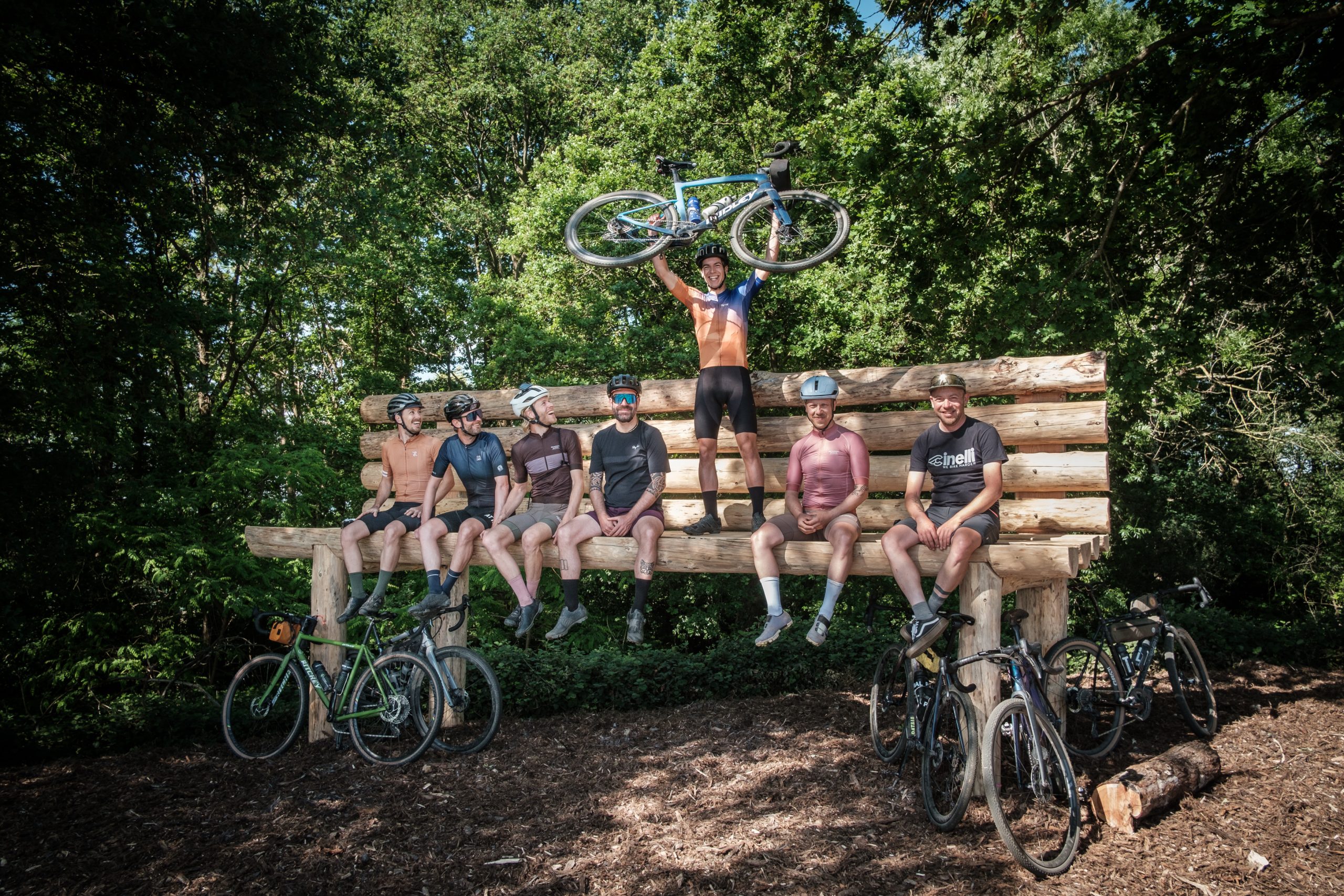 On the second day, we linked the different forests of the Flemish Brabant, with a sense of solitude even being close to a metropolis like Brussels. At some points, the hard mud prevented us from riding at a constant pace, but we were also rewarded with smooth gravel highways in between high trees. The Meerdaalwoud, Zoniënwoud, and Hallerbos led us to our final destination, Halle.

Despite not being able to cover the remainder of the Flanders Divide, we were told good things about the final segment from the west of Brussels to the coast. Along the Pajotteland region, riders will encounter different paths through farm fields in varied conditions, and after a constant left and right zig-zag linking gravel roads, they will climb the Muur van Geraardsbergen. This monument had to be included in one way or another in the parcours of the Flanders Divide, as the history behind it trespasses cycling disciplines.

The route also includes the Oude Kwaremont and Paterberg, the final two cobbled hills of the Ronde van Vlaanderen. After the Flemish Ardennes, the remainder 125 km head north through mostly flat terrain, so you can either be lucky with the wind and arrive at the coast with no effort, or curse the DirtyDropbars crew for making you suffer until the very end. 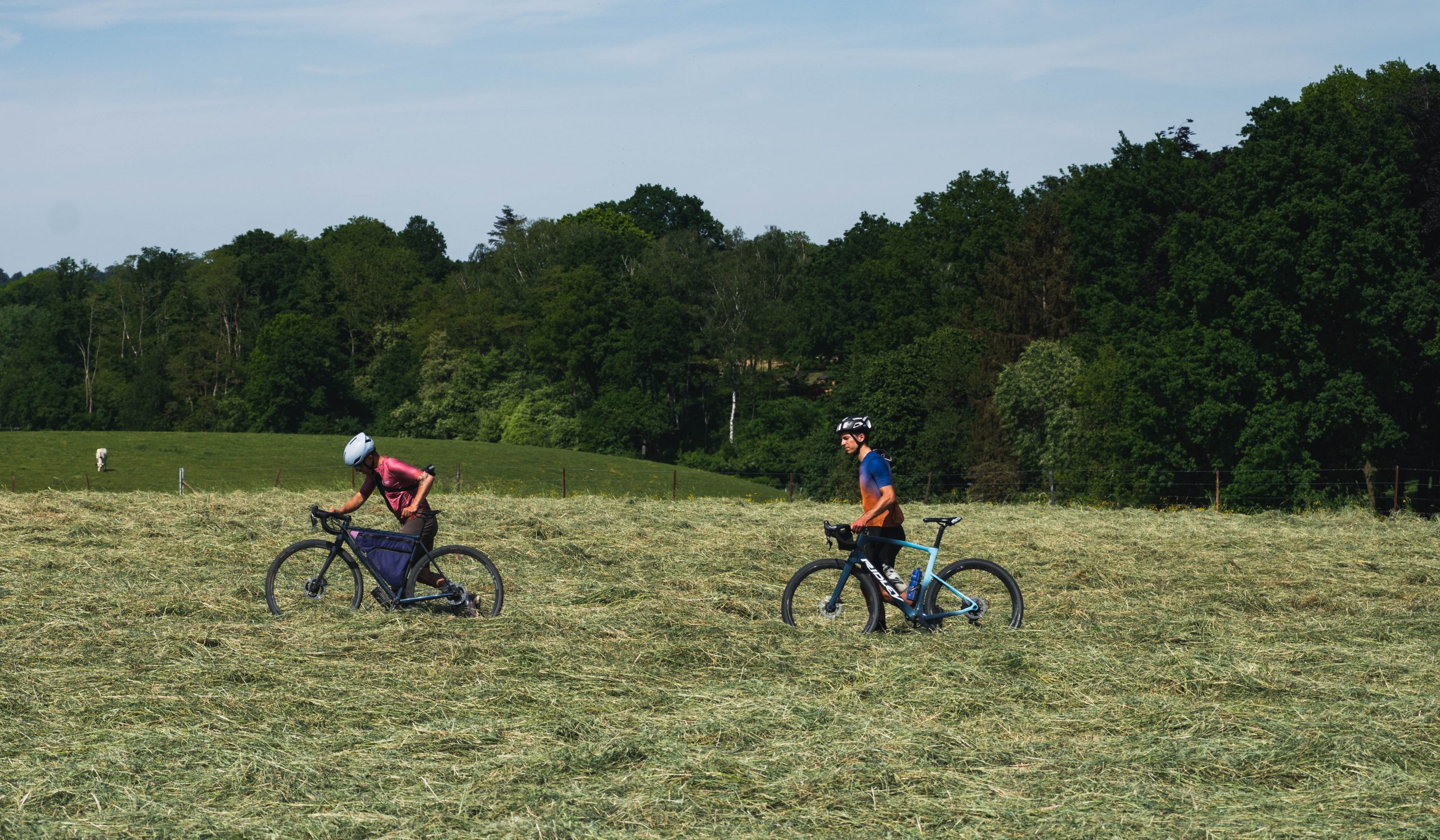 The track of the Flanders Divide was not planned with the sole purpose of including as many gravel sections as possible. Many roads in Flanders are quiet and lead you through scenic landscapes, so there was no point in rejecting them for the simple reason of being surfaced.

When asked about the best direction to tackle the Flanders Divide, Nils and Jochen told us that one can start from Oostende or Hasselt depending on our preferences, but that it is always rewarding to finish by the sea. We wouldn’t have minded extending this launch ride and ride all the way to the end, as the boiling heat during the weekend was the perfect excuse for a swim at the beach as a reward for our accomplishment. 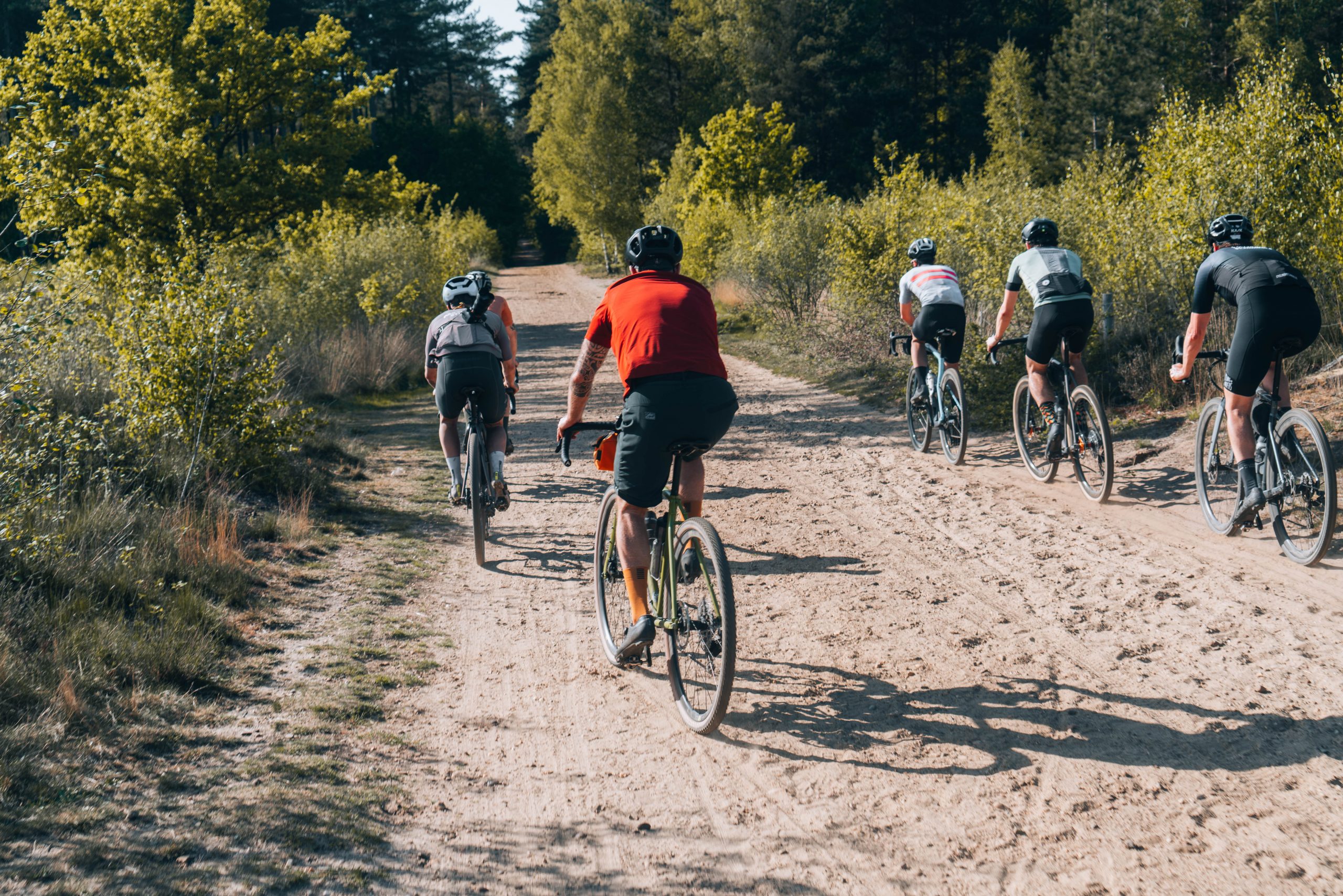 Who will set the FKT (Fastest Known Time) of the Flanders Divide? On the komoot collection we can see that the full route is divided into five suggested stages, but we all know that people also like to explore the limits and do it in one go. There are several bivouac areas along the route, and the Flanders Divide passes by some cycling-related cafés and accommodations worth stopping. The Flanders Divide is made for a gravel bike, mountain bike or touring bike with at least 35 millimetres tires, but preferably even wider. The first 50 cyclists who complete the route will receive the unique Flanders Divide patch.