Between the 7th and 9th of August, a different and random bikepacking event took place, the IV Lands. Thinking about the moment we could finally go out, many of us, during the lockdown, have set goals, prepared routes, and organized some kind of trip. This was the motivation behind the three-day round journey that Ibai Fradejas, Amatter café and Gsport organized with the help of Komoot. 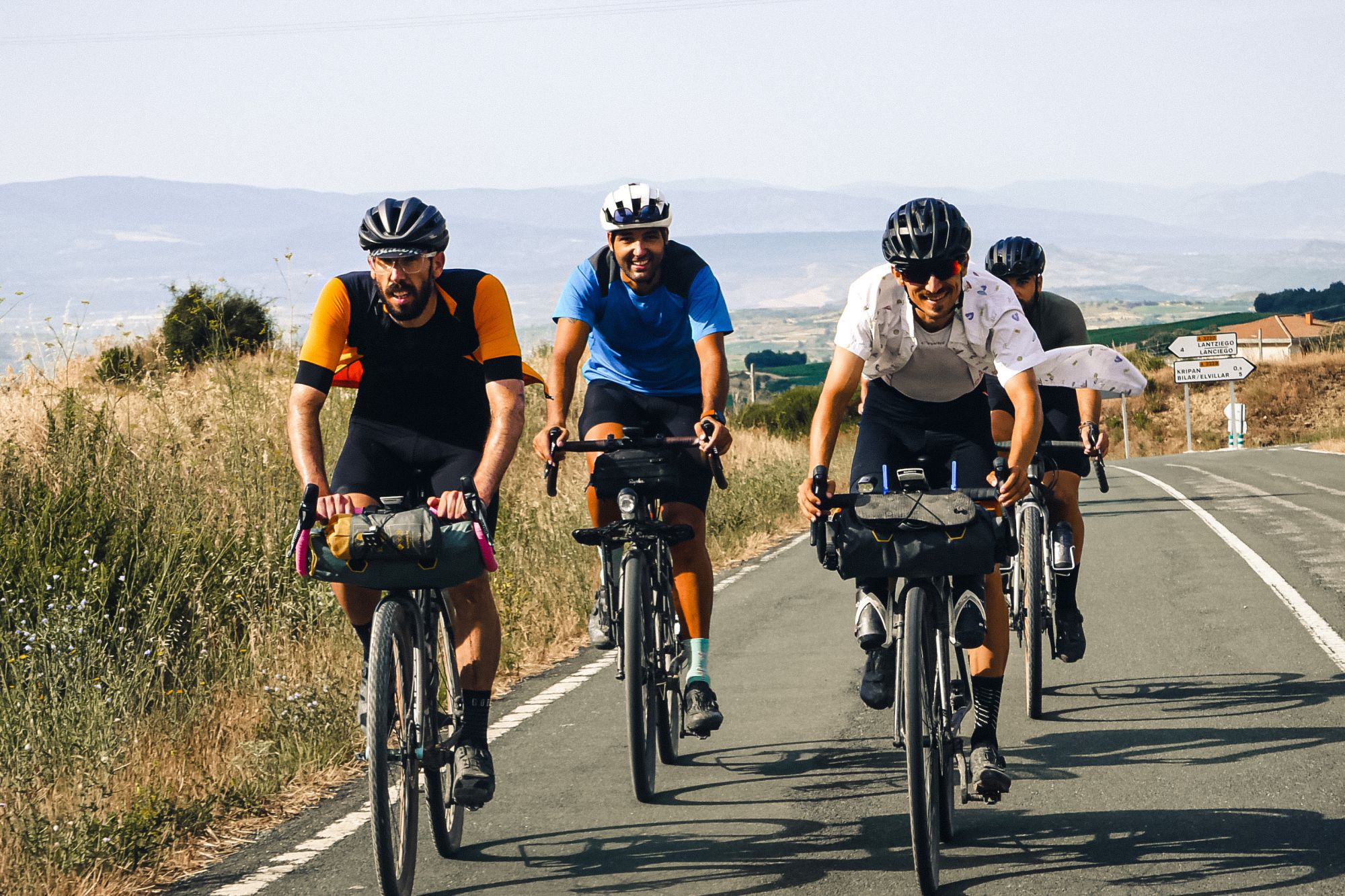 Starting in Vitoria-Gasteiz (Vasque Country, Spain), the idea was to cover the most beautiful gravel roads of the region for three days, going across the territories of Álava, Castilla León, La Rioja, and Navarra, which gave name to the event: IV Lands. The spirit of the event was non-competitive and was promoted in social media as a free of charge gathering for everyone.

The idea was to get to know an area of northern Spain, unexplored to many, going through mountains with deep forests, valleys with rivers, vineyards, plains of fields, and summits with ski stations. The course was suitable for all levels (290 km, +4.800 m), from the more adventurous bikepackers to those who were riding a gravel bike for the first time to go on a little trip.

What appeared to be a very heterogeneous group at the beginning, bit by bit, turned into strong connections despite the differences. This resulted in a very welcoming and relaxed atmosphere, the perfect place to find people with similar passions with whom to share lived experiences and, who knows, to create new ones in the future.

Meeting point and start, Vitoria downtown. We arrived at the café and we already saw some bicycles leaning on the entrance. As we waited, we went in and had a cold brew with some banana bread to get some energy for the day. Little by little, the place got busier until everyone was there, around 40 participants coming from different corners of the peninsula.

After the informative talk, we started riding towards the first climb. Big grey scary clouds ended up unleashing their weight on us before we could summit the climb. The hot humid air turned fresh and chilly, but we kept on. We rode up through a tarmac road, but after a few minutes, we already switched to gravel trails, soaked and slippery due to the storm.

The changing landscape accompanied us through ochre fields and green woods under the sight of dark clouds and the sound of far thunders. The group split up in the hilly terrain but we gathered again under the porch of Peñacerrada’s church. From there, we headed to the last climb of the day, which started on tarmac and finished on gravel with a complicated descent. Because of the rain, we decided to replan the route and ride on tarmac all the way. However, half-way through the descent, we connected with the original track again.

The spontaneous rain did not give up all evening long. The less adventurous headed to the hotel, where they could have a hot shower and dry up well. The wilder ones went on a quest to find a shelter for the night. In the end, a hooded frontón (court wall) would save the day. The sun was setting as some rays appeared on the horizon. Everything was laughter and smiling faces, it had been a good day to remember.

A new day was beginning, in view of the terrain and the weather forecast it was going to be the hardest stage. The group, which had split up after spending the night in different corners of Haro, got reunited at the outskirts, where the Amatter team that would follow us during the day, awaited us with music. Everything looked fantastic, so we started pedaling towards the mountains.

The apparently flat path, since we were riding on an old railway track (Vía Verde) through grass fields, directed us towards San Lorenzo (2.271 m) at the back. Before starting the climb we gathered again and refilled the bottles with water. A winding road full of switchbacks with an average grade of 10% was our journey towards the top of Cruz de la Demanda pass, luckily, on tarmac. The heat was starting to be intense and there was no shade to hide.

As we reached the top, surprise! A huge provisioning stand was awaiting us with coffee, kombucha, water, cakes, nuts, bananas, and even gazpacho. All of that surrounded by music and faces of astonishment from the participants. Under a blazing sun, we went all over the mountain range and around the ski trails of Valdezcaray, and we descended through a fresh forest of beeches before arriving at the civilization again, where we stopped to recover.

The last sector, consisting of ‘favorable terrain’, took us through some segments of the Camino de Santiago trail. The day had been long and arriving at Navarrete felt like a victory. We conquered a pub where we ordered beers and servings of French fries. After a while, some clouds that had been stalking us during the whole afternoon finally turned into rain, but it did not matter anymore. We all had dinner together in the hotel, the fatigue was present, but the hunger and the memories of the day revived everyone. At the end of the day, the group split up again. Some stayed in the hotel and the rest went on seeking a place to lay the sleeping bag and, why not, a frontón again.

There was some movement in Navarrete that night, and not everyone was able to rest as they would have liked. However, at the meeting spot, everyone was determined to cover the last stage. Again, a cloudy start, but it helped to mitigate the heat. We were at la Rioja, therefore, the landscape could only be vineyards and wine cellars. The route took us along roads surrounded by infinite fields.

At Laguardia, a charismatic town for its beauty and presence in the region, we stopped to head to the highest point of the day at Lapoblación. Amazed, we rode through that green and dry landscape, with high mountains at the back and sun rays slipping through the clouds. Some unexpected hard short climbs split the group, but we all arrived to have something fresh at the top of the climb. From there, it was all downhill until connecting with a fast track.

As we got to Maeztu, after pushing the pace a bit on the descent and the Vía Verde, some people decided to stop for lunch in a restaurant and the rest headed to Vitoria. Nonetheless, we still had to climb a little hill that went through a quarry and ended up in a smooth gravel road into the city. Summing up, a good weekend of gravel, adventure, cycling, and discovery.

Next, you will find the Komoot track starting from Vitoria-Gasteiz, even though it can be started from any other point of the course. Remember to refill the bottles frequently, since some parts are a little desert-like, carry some tools for flats, and some warm clothes since the highest point of the route is 2.000 m.