Christmas Holidays are characteristic for gatherings with family and friends, endless meals, and exchange of presents. For this to happen, in many cases it is necessary for others to take care of transporting them to their destination, momentarily turning into Santa. This is how, Jimbo, with the aim to deliver some parcels and provide awareness of cargobikes as an eco-friendly means of transport, decided to go on a long-distance 24h-express bike-messenger service from Madrid to Murcia covering 350 km in less than 17 hours so that everyone could have their presents for Christmas Eve. 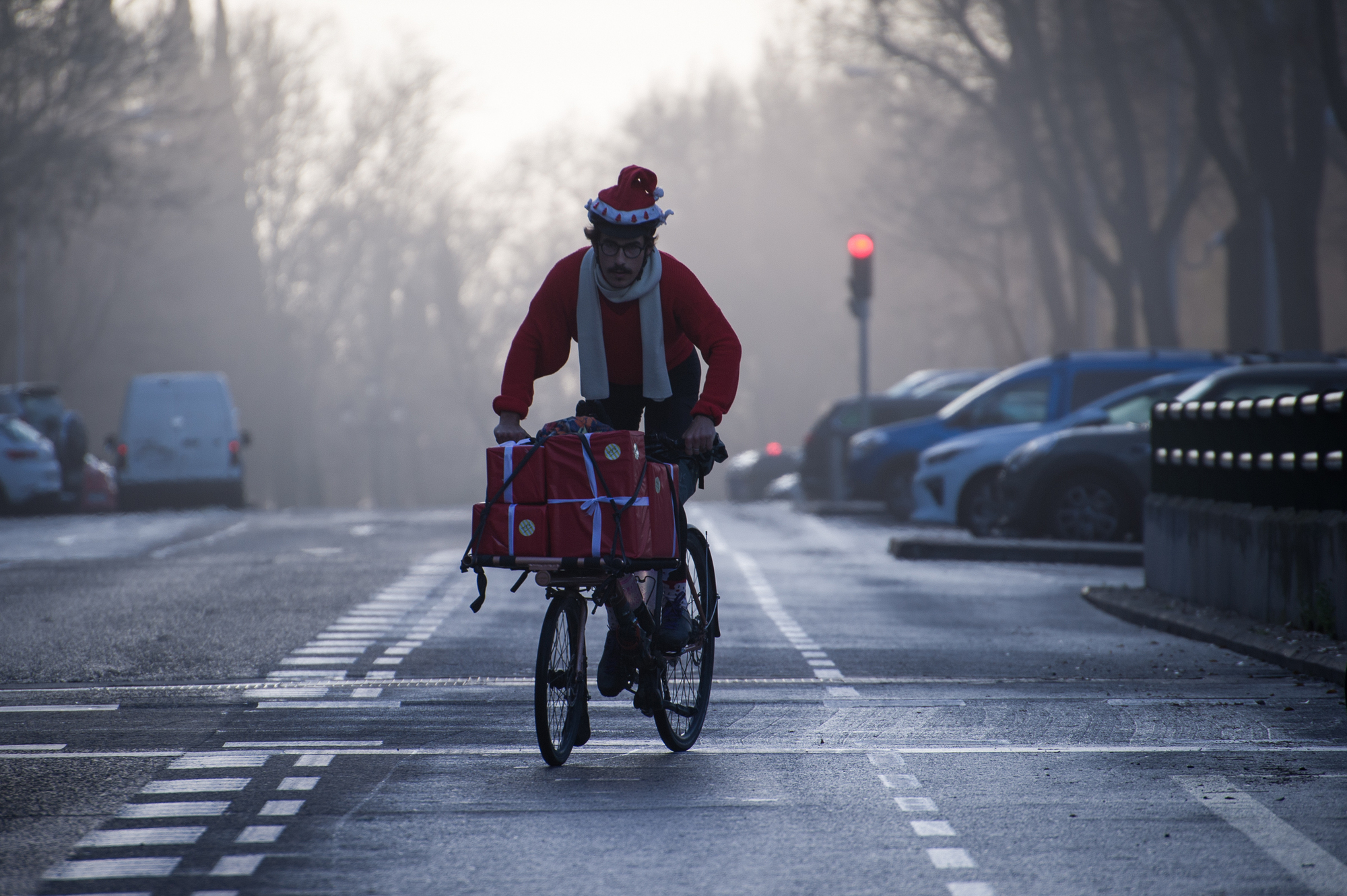 Jimbo is a passionate for life who ‘feels what he does and does what he feels’. His life has always been closely related to logistics since his family works in the truck delivery business. First, it was motorcycles and cars, but once in the university, where he studied industrial engineering, he discovered a whole world as bicycles appeared in his life. Bikes have allowed him to travel, meet people, and also work as a bike courier. During this time, sporadically, all converged on cargobikes and, for example, he did an internship and based his final Bachelor’s project on the design and building of these. In this manner, Jimbo has found his passion and he spends more time building in the workshop than on the bike. He is currently working for Andrés Arregui in the Escuela Técnica de la Bicicleta (ETB, Technical School of Bicycles).

The motivation behind the challenge

This trip was something casual but with a lot of meaning, not only to deliver some packages for the Holidays but to defend and reclaim the role of cargobikes in the city as an efficient and eco-friendly way of transport with barely any carbon footprint. The idea of this action, aside from shipping packages, is to be able to create a local and long-distance logistics network, provide awareness and visibility of cargobikes, and encourage local, artisan, and responsible trade. As Jimbo told us, express long-distance bike-courier services are not something feasible, but in Spain things need to be exaggerated in order to be noticed; this is why he also dressed up as Santa. From his point of view, cargos are an alternative to cars in the city since they allow you to take your kids to school, go shopping, or carry packages in a shorter time and with a minimal carbon footprint. This shipment is the first step of a long-distance logistics project that they will name Cargoloco, which is presented as a movement and medium of comunication.

On the evening of December 22nd, Jimbo was picking up the parcels in PeSeta’s shop (Madrid), which specializes in clothes and accessories locally produced. Due to curfew restrictions (in Spain it is not allowed to roam freely between 23h and 6h) he had to wait for the next day to start riding punctually at 6h in the morning. Thus, on the 23rd he was getting on his Omnium cargobike dressed up as Santa to get to Murcia, where he had to deliver the packages before 23h at Momo, a female apparel shop. A maximum of 17 hours to cover the 350 km that separate both cities. 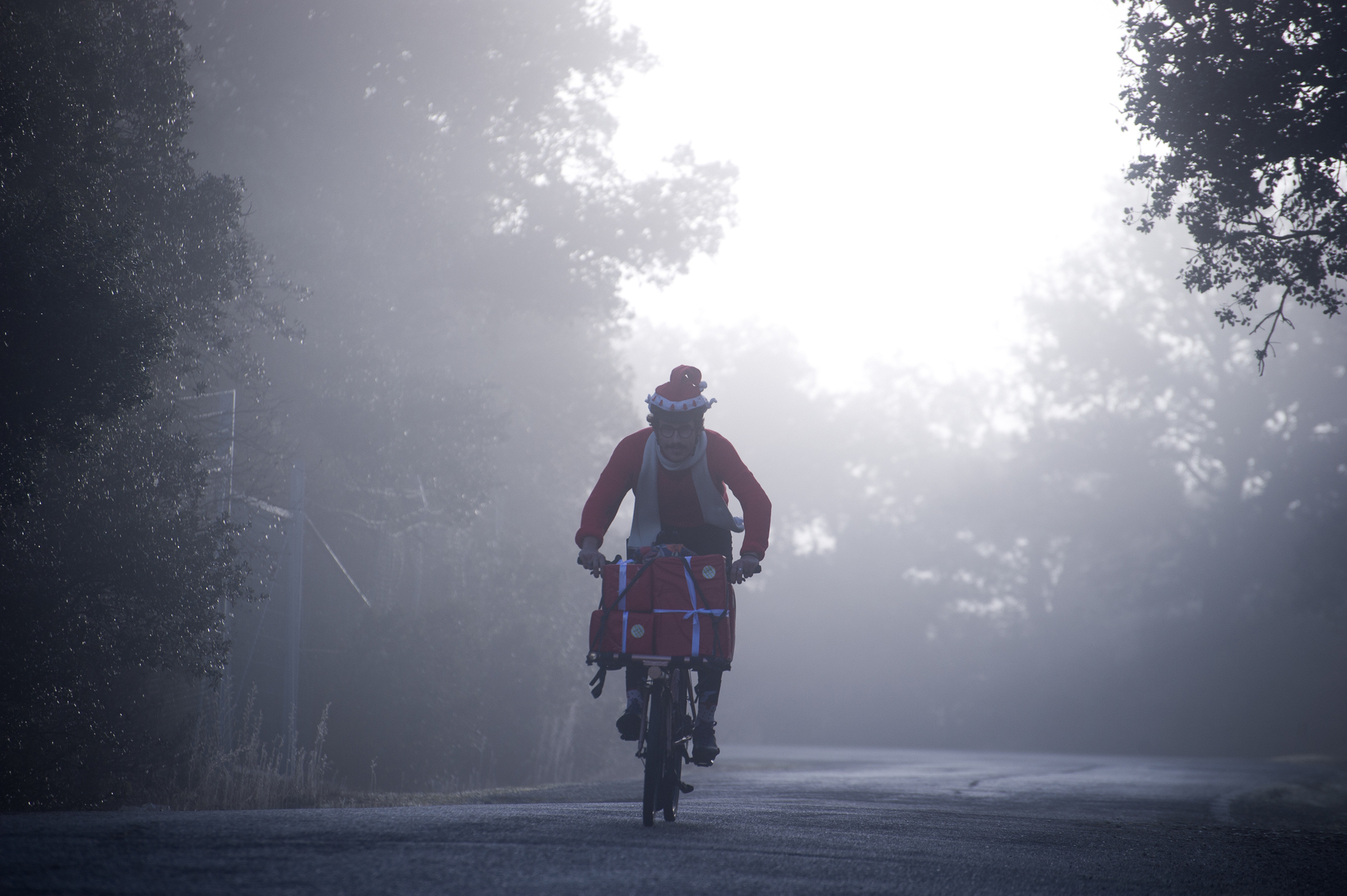 For Jimbo, it was an effortless journey, since the route was scenic and he felt he was traveling with a purpose, which made him enjoy every single second. The first kilometers were the toughest as he was blindfolded by the fog and pulled backward by some headwind. Cargobikes, loaded to the top in his case (20 kg of a bike plus 15 kg of goods), are not particularly aerodynamic. Luckily, the route did not have much climbing (2.000 m) and the Sun and good temperature accompanied him the rest of the day. Due to the time limit, he only took a long break on the 200th km in order to recharge batteries and keep on. As he rode, people in small villages greeted him and even some truck drivers stopped to take pictures of him. He arrived on time, within the curfew restrictions, and before 23h he was in Murcia. In this way, everyone could have their presents at the shop and ready for Christmas Eve.

With this adventure, similar to Resolution Race, people are proving that long-distance deliveries with a small environmental footprint are possible. Thus, the use of cargobikes beyond the limits of the city is becoming a plausible reality that will surely have an important role in the future world of logistics.

I first met Jimbo at a summer bikepacking event around…

Christmas Holidays are characteristic for gatherings with family and friends,…