As Sol likes to say, life can be either poetry or prose, there is only you to choose. She, as well as Javi, inclined for emotions, feelings, beauty, freedom, adventure, love and life, and so Nación Salvaje (Wild Nation in English) was born. This project combines travel, adventure, sport, nature, photography and documentaries, a combination of everything that inspires and moves them.

Sol and Javi met in their nineteens, when they were learning about documentary filmmaking and photography, respectively. At that time, they had everything at their fingertips and nothing seemed impossible, they were rebels who constantly daydreamt. Despite that, little by little society’s hunger trapped them, making them to “grow up” and fit in a working routine that led them to a feeling of fear and distress. That lifestyle did not suit them; they were not feeling at ease so it was “Enough!”. Looking for a change that would take them far away from the city and closer to nature, in 2014, they decided to go, on what would be their greatest trip: Ushuaia-La Quinaca along Ruta 40 on a bike. They were 30 years old, left everything behind and ripped through that bubble they lived in. This is how they committed to a 6000 km journey for more than 7 months from end to end across Argentina. Nación Salvaje had born.

“Nación Salvaje represents everything we are, yet also everything we want to be. There is still a long way to discover from which we can learn.”

By the time they planned Ruta 40, Sol and Javi were certain about something. Even though they had already hitchhiked, traveled by the vehicle and both of them loved hiked, cycling was the only way. Being capable of traveling by your own means and rules, on two wheels and in a self-sustained fashion allows you to be a part of the surroundings, feeling vulnerable to a place’s climate and geography. Besides, you can cover enormous distances at your own pace and stop wherever. Everything depends on you, your effort and your motivation. The direct connection with the surroundings, every pedal stroke that leads to the summit, the wind on your face on gravel descend, the speed, the adrenaline, sore muscles, and rapid breathing, that was what made them fall in love with cycling in all its shapes and possibilities.

“For us, cycling is pedaling steadily, with the arms on the handlebar and the view lost in the route while the Sun slowly sets in the plains of the Patagonian steppe.” 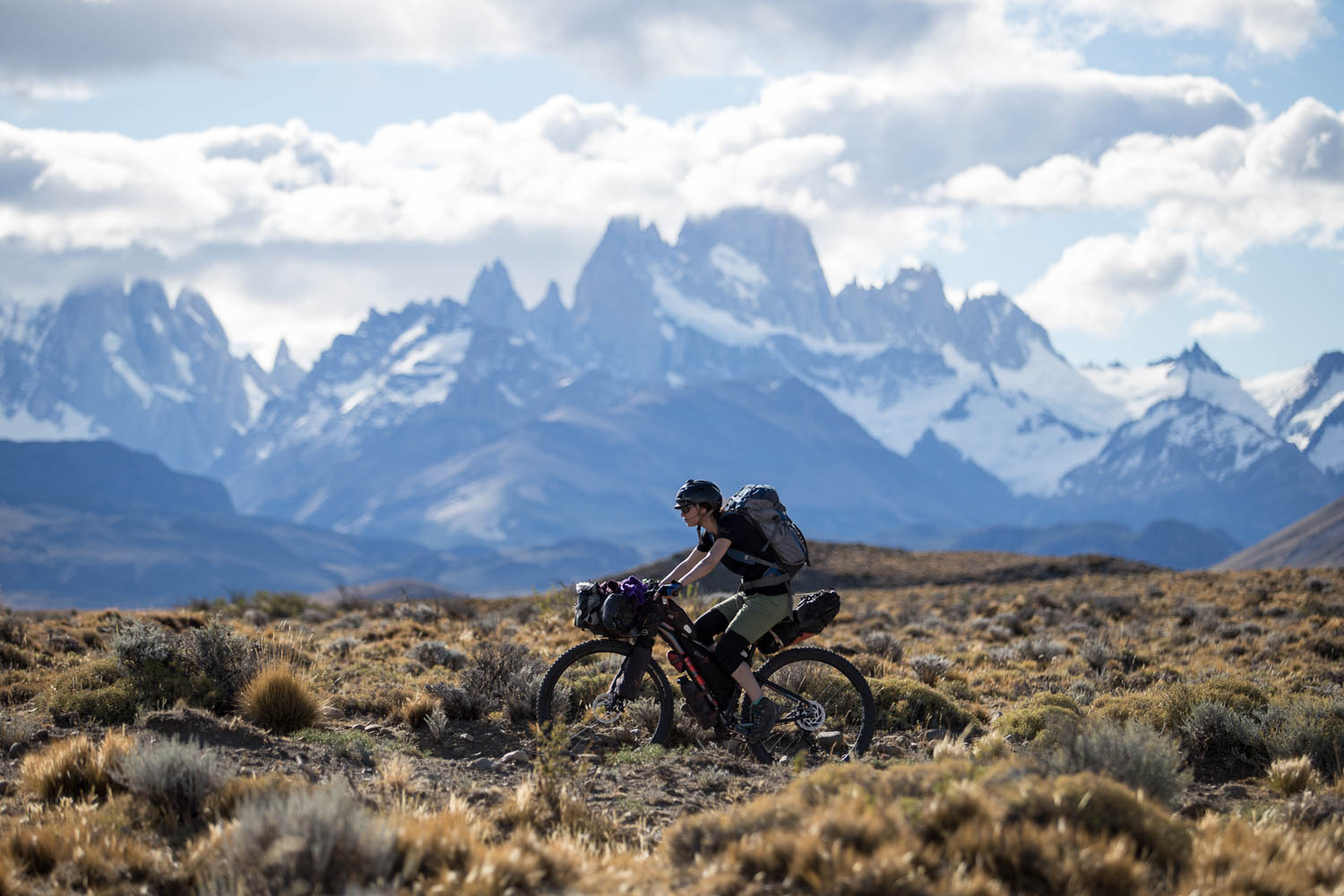 The appeal for adventure took them to the wildest and purest states of nature. Along the infinite moorlands of Ruta 40, as they pushed themselves into natural landscapes and devised their own limits, they had gained a better awareness of the world. Facing those difficulties transformed them, and all their concepts and perspectives of life changed. The wind, storms, cold, snow, height, mountains, plains, deserts, sunsets and all living creatures, were simple instruments that nature used to make you think twice all you know about. Because nature is the only one that will grant you a very simple and sincere answer that can only be comprehended once experienced.

“It is in nature where humankind inevitably clashes with another reality and their limitations, with the vulnerability and irrelevance of their existence, but at the same time, it is where they find the distinct and powerful strength that cannot be attained elsewhere.”

After completing Ruta 40 and spending more than one year touring around Argentina, in 2015 they realized that what fascinated them the most were uncrowded places away from civilization. They were glad about what conventional bike-touring had brought them, however, they missed the wilderness in its full splendor, they missed the Andes. In consequence, one day, Javi started highlighting all the routes that connected both the east and west side of the Andes in a map. A total of 43 passages between Argentina and Chile, 43 crossings that became the project that changed their life. Nowadays they have already completed 41 crossings -most of which they passed between October and April, since they are closed in winter-, and only Paso Mosco (Santa Cruz) and Paso Marconi (El Chatelén-Villa O’Higgins) remain. They could not accomplish the first one due to a landslide, and the second expedition requires glacier-adapted bikes. Aside from the personal experience, these expeditions will be part of a catalog in their web site, where each one of the crossings will be narrated in detail so that they are accessible to everyone.

“One day Javi took a map and started marking all the crossings from the mountain range that we wanted to pass, […] all the practicable passages between Argentina and Chile. No less than 43 crossings.”

Among all the crossings, they fondly recall two of them: Puna and Austral Patagonia. On the one hand, in Puna one comes across a mesmerizing habitat where all is immense and vast. The volcanoes and salt flats make you feel as if you were in a different geological era. On the other, Austral Patagonia welcomes you with impossible winds and incomprehensible skies. Everything is contoured by nature’s phenomena, with its characteristic ochre rocks and emerald rivers. Despite the steppe appears to be empty, you never sleep alone, surrounded by pumas, guanacos, choiques, wild horses and condors.

The unimaginable happened in 2016, while in the Socompa passage. One night, while they were camping in an abandoned train station, they were surprised to observe a truck that slowly advanced with its headlights off. The next they, as they reached the border control they mentioned what they had seen. What came after was an avalanche of questions, radio calls, a “thanks”, and cars rushing at full-speed as in action movies. That night everything was plagued with patrol cars, trucks, lots of police officers and, in the middle, a truck full of marihuana up to the roof. They had helped to capture some drug smugglers who were not aware of the two bike-packers.

“They were drug smugglers who crossed from Bolivia, taking advantage of the loneliness of the place. Without knowing, we had been an essential part of the operation.”

Nación Salvaje does not end up with Ruta 40 and 43 Crossings, it is still an open project that keeps growing with each adventure and experience. This is why not everything Sol and Javi do is pedaling. In one of their adventures, together with Andrés, they descended the Santa Cruz river in a boat and their bike: bike-rafting. With the bike aboard as they navigated through the river, they connected with nature in a different way: in a relaxed but at the same time alert manner. When the wind was too strong, they just folded the raft and pedaled along the parallel route. It was a total of 385 km in 12 days, combining water and earth, in which they could enjoy the emerald water and its surroundings, all of this before two mega-dams are built and destroy the river and its ecosystem.

“The attentive and deep eyes of a guanaco in the steppe, the compulsive and uncertain flow of water. We were at that moment, and forever, a part of the river.” 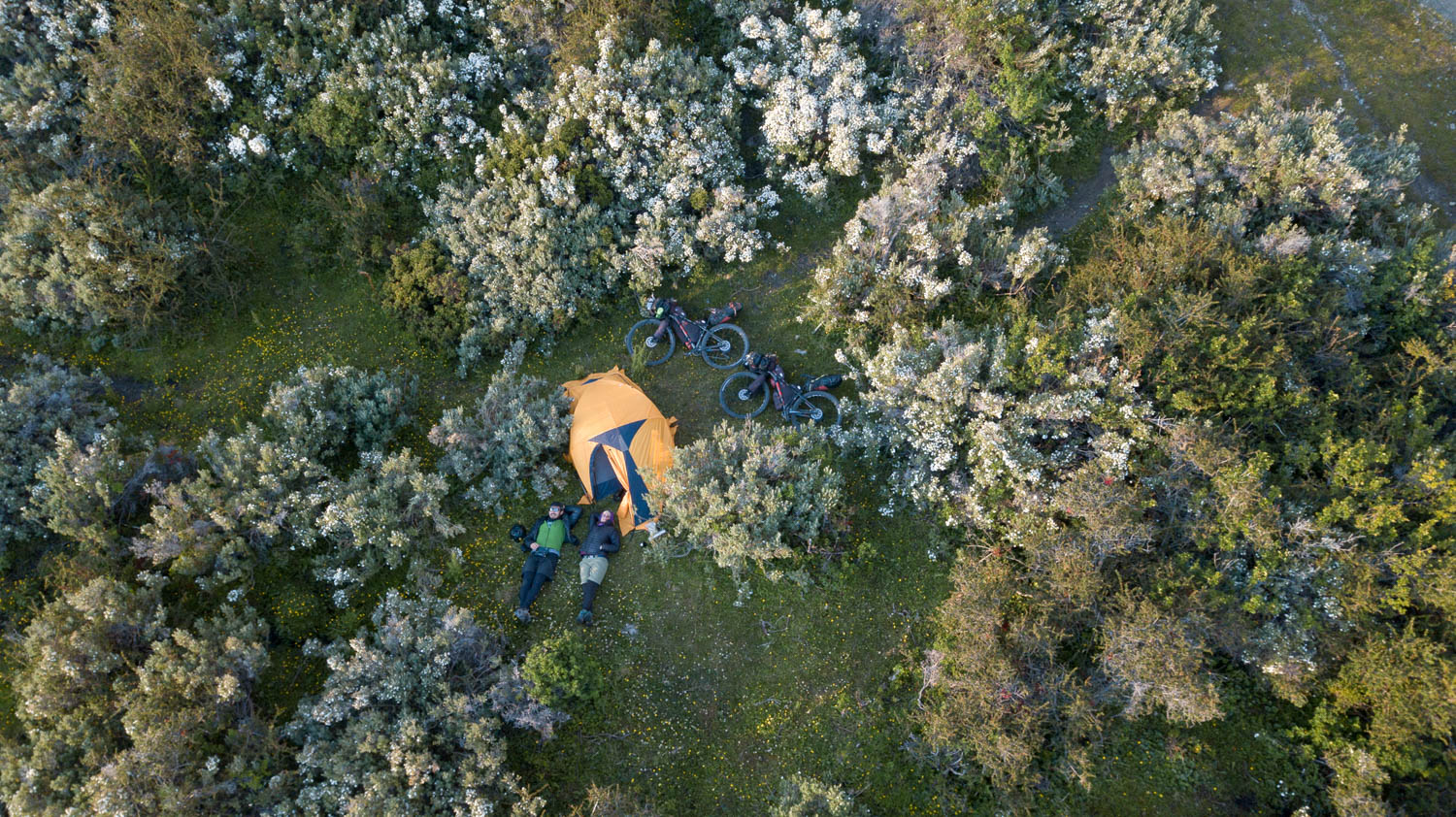 After so many trips and expeditions, Sol and Javi are two experts on bike-packing and can guide us in what to pack, first aid or the fact of cycling at high elevations. They also organize adventure cycling clinics were they tell us firsthand about those tips that can only be obtained through experience.

With the intention to change and escape from conventional, Nación Salvaje was born. Throughout these years, their adventures have gone through borders, summits, mountains, infinite plains, rivers… yet the project is still alive. Because Sol and Javi love their life, in which every day they celebrate what surrounds them and their existence. Therefore, the project goes on with new adventures, discoveries, and experiences from which we can all learn. Where will the next one take them?

Ready for a new format of an ultracycling racing event…