While the majority of people make the most of Christmas by staying home with their family, cyclocross riders follow a different logic and spend the entirety of this period racing in the cradle of this discipline, Belgium.

This time we were there too, experiencing firsthand the day-to-day life of a UCI cyclocross team like the Nesta – MMR CX Team. The whole squad traveled from Spain to the Flemish area of ​​the country to take advantage of the volume of races that take place in just a few days, and finalize the details ahead of the National Championships.

A yearly gathering of CX stars

The week between Christmas and New Year is probably the only time of the season when traveling to Belgium from a distant country justifies the expenses incurred. Like the Nesta – MMR CX Team, many others made the effort to stay in the area for a couple of weeks, so in some cases, the startlines featured close to a hundred participants. “Regarding results, you know that this is going to be the worst week of the season. The least suitable moment to look for a result is this one, because it is when all top riders are here”, said Daniel Ania, manager of the team. Nonetheless, both the team and the individual riders still benefit from this high-end type of racing. 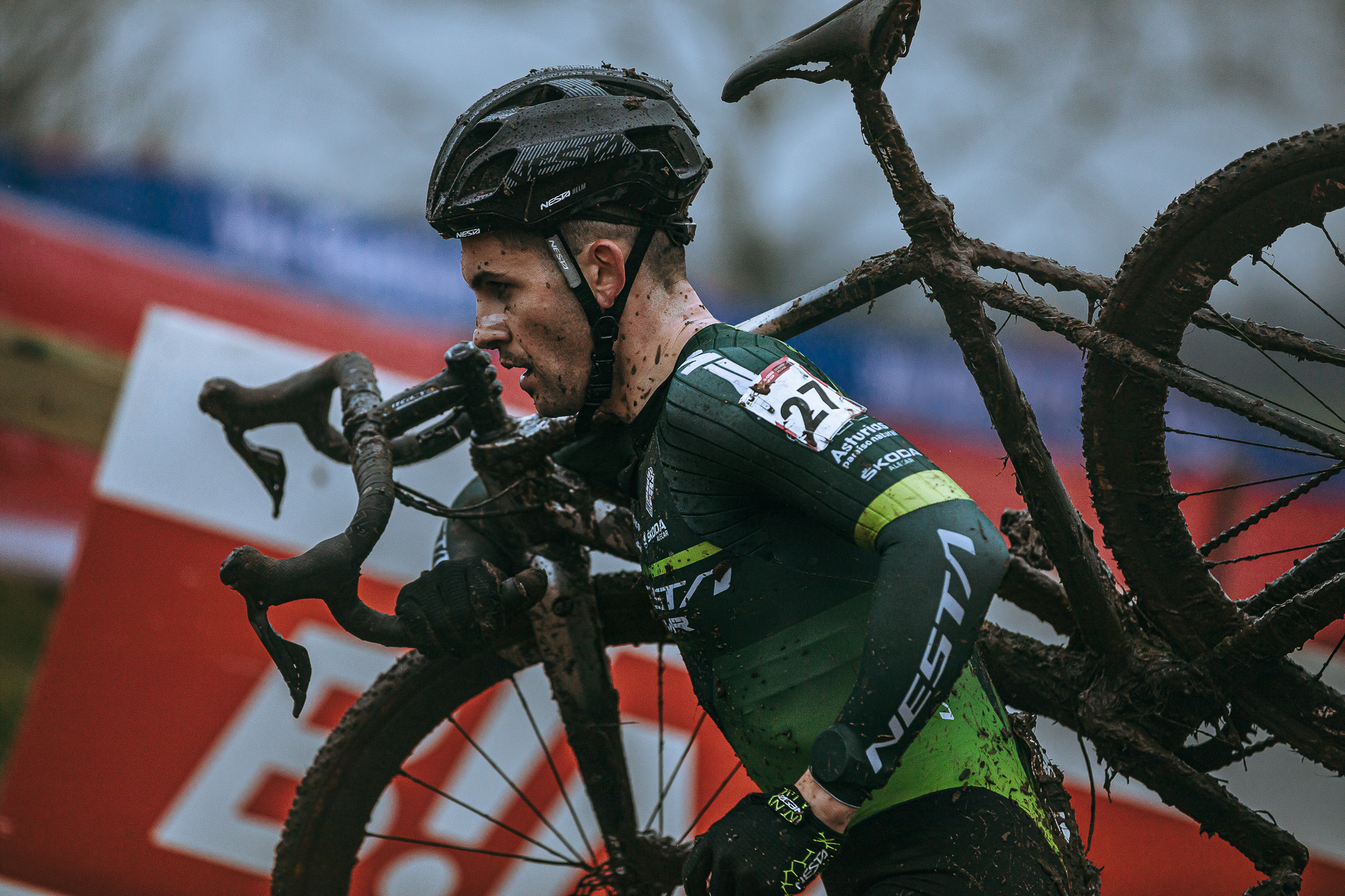 It was not the first stay for the team in Belgium, so they already knew more or less what their aspirations were. Getting a top 15 in one of the races over the Christmas period was a realistic goal, and although there are usually no big surprises, you always have to be there to take advantage of any opportunity that may arise. Whether it is a bad day for some of the favorites, or a circuit that is not to the liking of the local cyclists, there is a possibility of getting a great result with which to leave the anonymity of the middle zone of the results sheet.

The season began with fans at the races, but just before the Christmas period, it was announced that all events were going to be behind closed doors. Immediately, the organizers of Diegem’s urban race decided to cancel their event on December 29 due to the impossibility of preventing fans from accessing the venue.

This nocturne race was a great incentive for many, but not all. “Diegem is a race that I don’t like. Whenever I have raced there I have had several issues, whether it was a broken drivetrain or Garmin, or simply a flat tire”, Lucía told us, considering the possibility that the race was the reason for her bad luck.

Last year they already had to compete under a situation of uncertainty, because every week there was news about the cancellation of tests. Riders have learned to adapt, and when a race is canceled, it is always possible to see the bright side of it and practice the technical skills or go out for an easy ride. 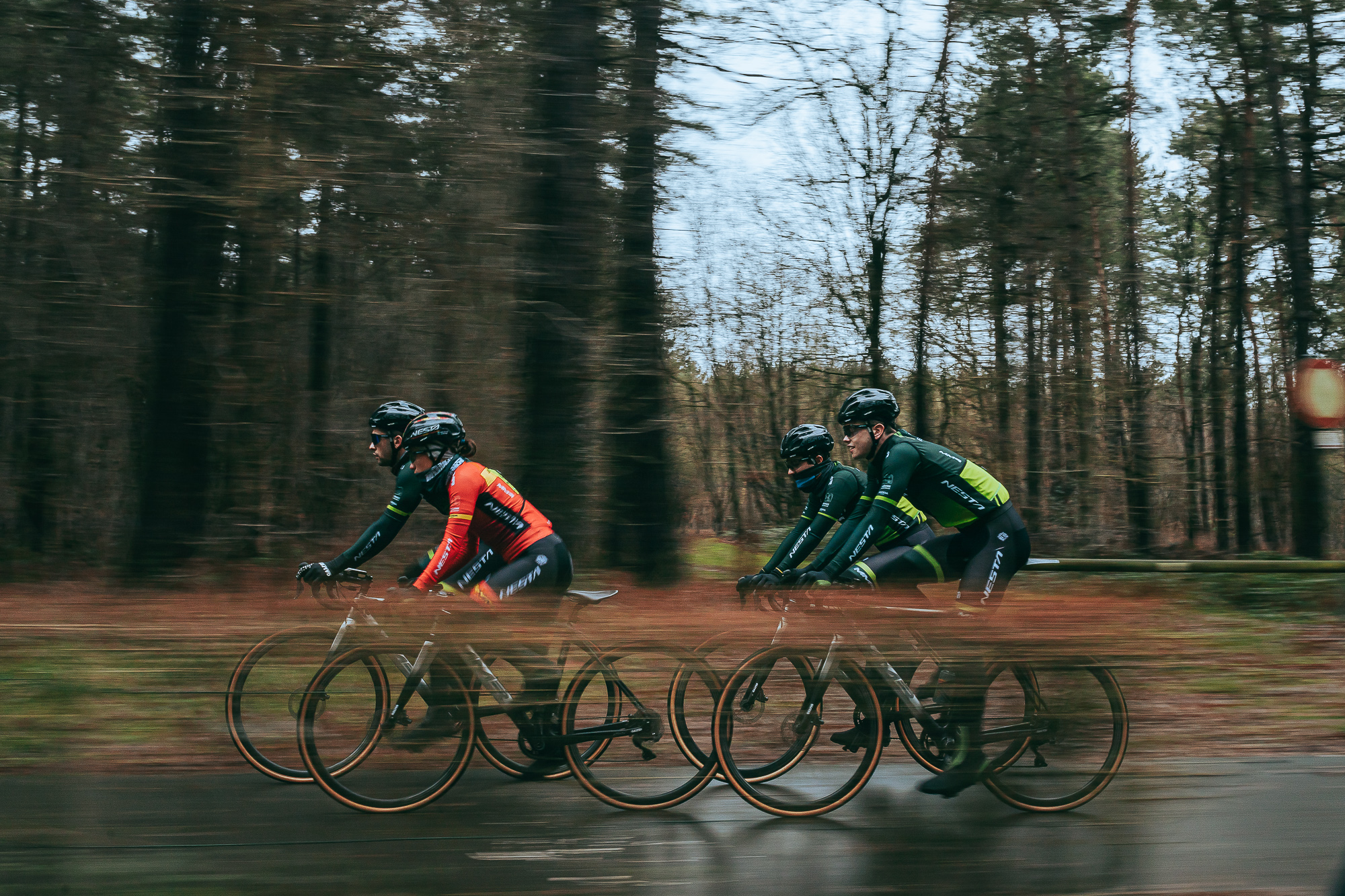 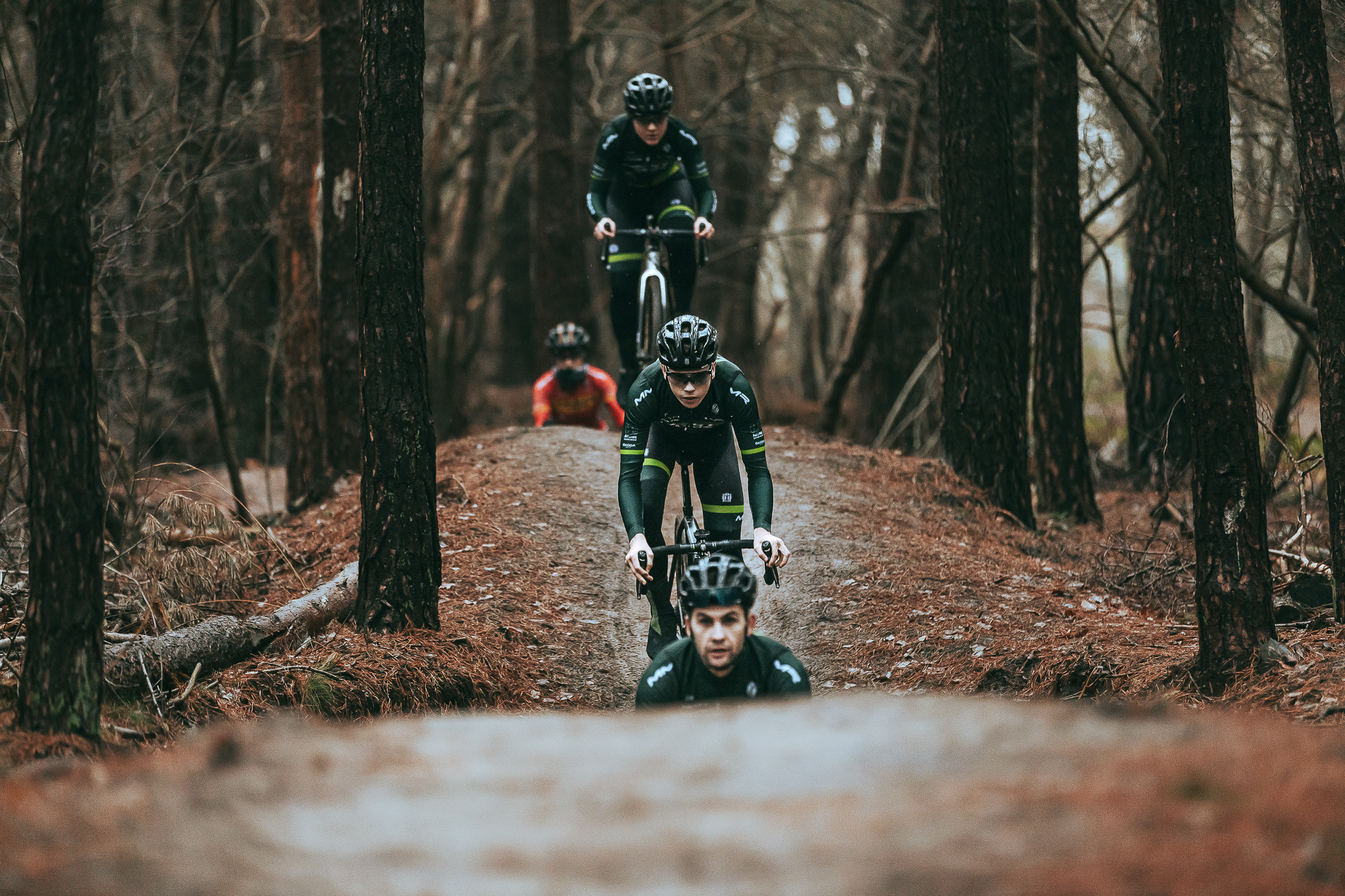 A cohesive group of people

Kevin Suarez and Lucía González have both been with the team since the 2018-2019 season, when the team acquired the UCI license. They are two of the most prominent cyclists in the Spanish national scene, and are part of the broad and even group of riders who usually fight for a top 20 in the international competitions with the highest.

For this season, Lydia Pinto and Alain Suarez joined the team, starting this new chapter in their career as first-year under 23 riders. This mix of experience and youth certainly benefits both parties. “It is good for me that he is here. He puts pressure on me because I am always late”, jokes Kevin about the arrival of his brother to the team. During the reconnaissance of the circuit prior to the race, we saw them riding together, stopping to discuss the best line and analyzing all the key points.

The older brother, who is 27 years old, is enjoying a season at a high level, without being as constrained by the handicap of allergies as in past years. His goal this season has been the World Cup, but he has been able to combine it with races at the national level. The only time he had to pick one race over another was on the weekend in which the European Championship overlapped with two important events in the Basque Country, and due to the difference in UCI points between one option or another, he stayed in Spain to get two worthy podiums. A month before, he got two wins that gave him the extra motivation to face the bulk of the season.

Despite the fact that Alain, his younger brother, has competed abroad for years, this entire Christmas period away from home was something new for him. Unfortunately, Alain has returned home without really being able to race. A crash right out of the start in Loenhout prevented him not only from finishing that day, but also was the cause of his DNS the following Sunday in the World Cup in Hulst. He suffered a severe blow to the shoulder on which he usually lays the bike during the running sections, and although his teammate Lucía did dry needling and massages during the following days, he could not fully recover.

Racing against the big stars is an extra motivation that they don’t find in national races, but it also means setting goals and being realistic. “If Van Aert sometimes finishes the races outperforming his main rivals by more than a minute, imagine the gap versus young riders like us,” says Alain.

This is not usually the case for Nesta CX riders, but the fact that the first ones go so fast hinders the race of riders at the bottom of the classification enormously, since the distance they cover before being cut by the 80% rule is considerably less.

It is difficult to stay motivated when the difference in age, and consequently physical abilities, is so remarkable. However, given the lack of races for the lower categories in recent years, there is no choice but to add race pace in this way.

We saw firsthand moments of disappointment. After being cut on the last lap in the Heusden-Zolder race of the Telenet Superprestige, Lydia spent minutes on the ground frustrated for not being able to cross the finish line. However, shortly afterward she was already cheering the elite men and taking pictures of her idols. 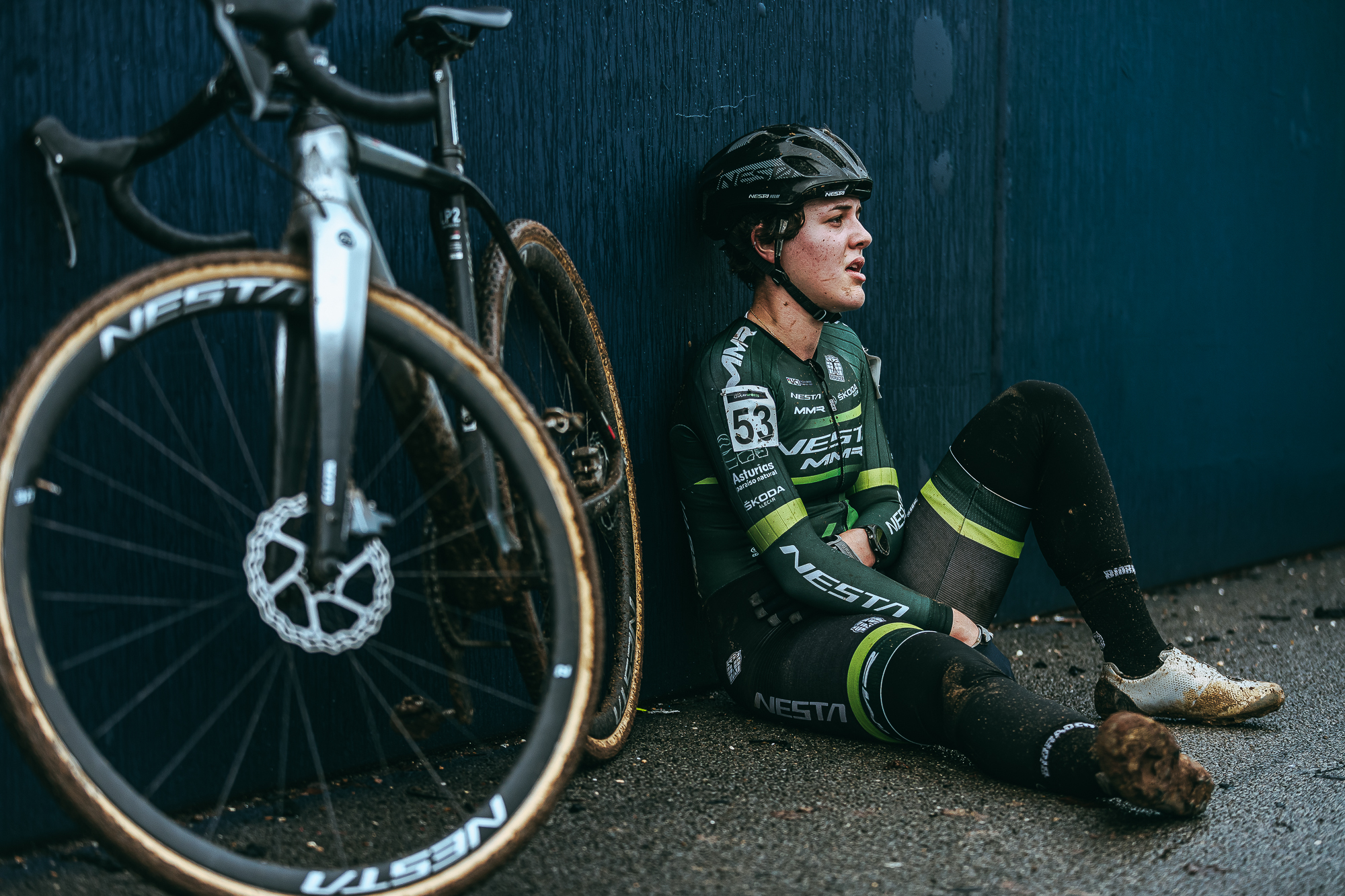 For Lydia, this is the first season racing beyond the borders of her country. Unlike the men, female riders suddenly have to take part in the elite races as soon as they are no longer juniors, so sharing the starting line with the Dutch who dominate the world of cycling was a good way to debut. She came mainly to see what her level is compared to the others, but the nerve shown in each of the races promises many successes in the short term.

She also shared the startline with Lucía, who arrived in Belgium in order to regain her race sensation. After a busy start to the season, the accumulated fatigue was beginning to show in the results. For this reason, she strategically chose which races to take part in based on which circuits suited her physical and technical qualities. She skipped the race on the first day of the year in Baal, but got decent results in the occasions she contested.

More success once back in Spain

Their stay in Belgium was nice while it lasted, but as soon as they finished the race on January 2nd in Hulst, they gathered everything and started the long journey by road back home, where they spent a couple of days before moving to Xàtiva (Valencia), where the national championships were held.

Apparently, the days racing away from home suited them wonderfully, as they got a decent amount of medals. Lucia was proclaimed champion of Spain for the third time in a row, being able to wear the red-and-yellow jersey for another year. Kevin got the silver in a circuit that suited perfectly the strong points of the winner Felipe Orts. As for the young guns, Alain continued to recover sensations, and Lydia stepped on the podium as second in the u23 category.

“Only those sports that take place on snow or ice…