Despite having taken part in a few long-distance adventures before, they had always been directly related to gravel. However, for our latest achievement, we had the chance to be part of the first edition of the PedAlma – MAD to BCN, an ultradistance event for road cycling.

The goal was to connect Madrid and Barcelona through secondary roads and complete the route of 685 km and 7.000m of elevation gain in less than 50 hours. In line with most long-distance events, it was about auto sufficiency and deciding to stop or not to eat or sleep. 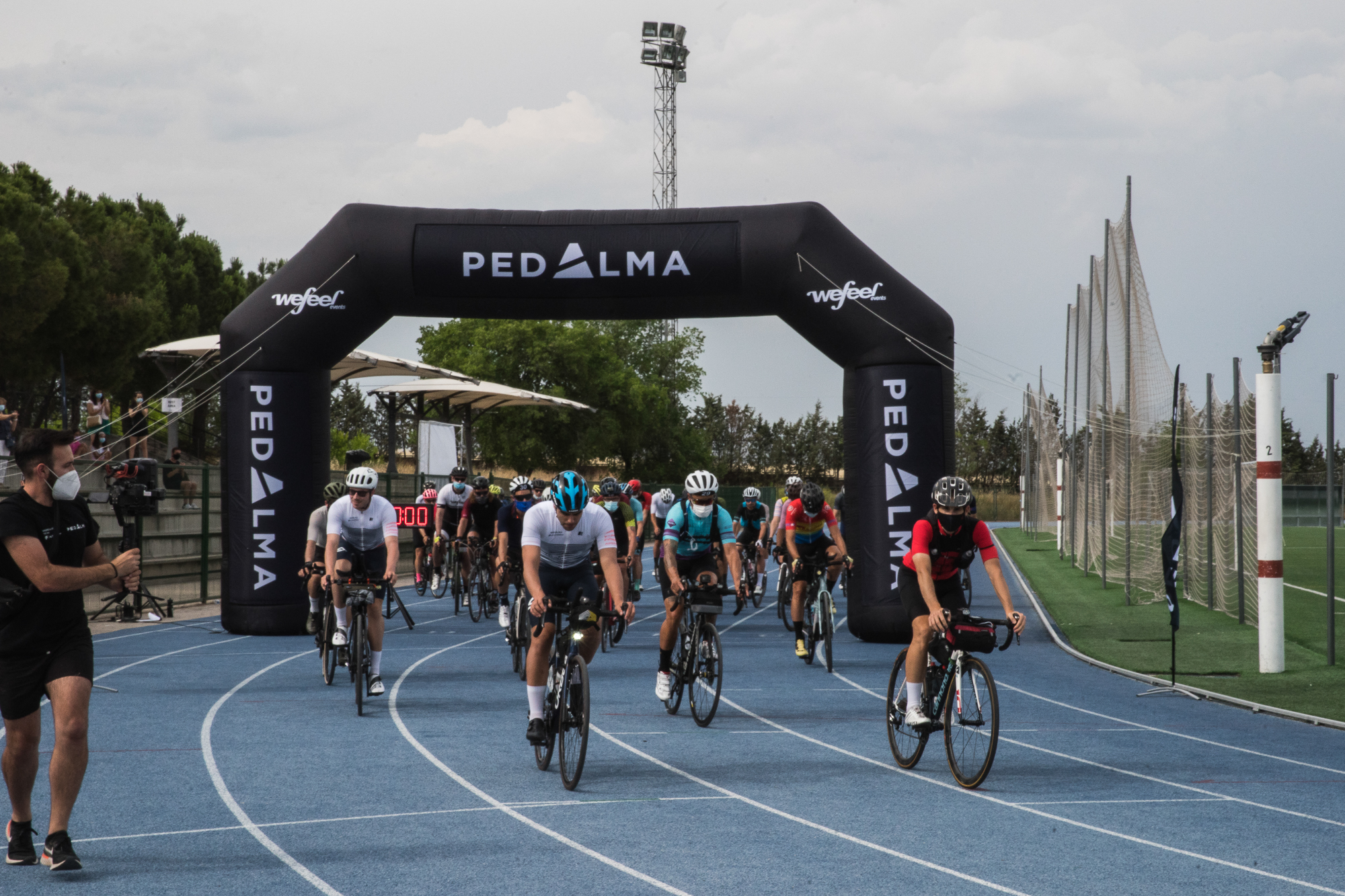 This first edition was limited to 50 participants. Some of them wanted to enjoy the journey, stopping to rest when needed, and others opted to reach the finish line riding non-stop, but always under a non-competitive way.

Since the first moment in which we decided to jump on this adventure, we were sure that we wanted to go one step ahead and we dared to try to complete the route without sleeping in order to arrive as soon as possible.

It is easy to think that, after having taken part in gravel events with a high degree of difficulty, road events can be easier, which was far from the reality. Obviously, the distance and the choice to not sleep were two big handicaps for the body and mind. 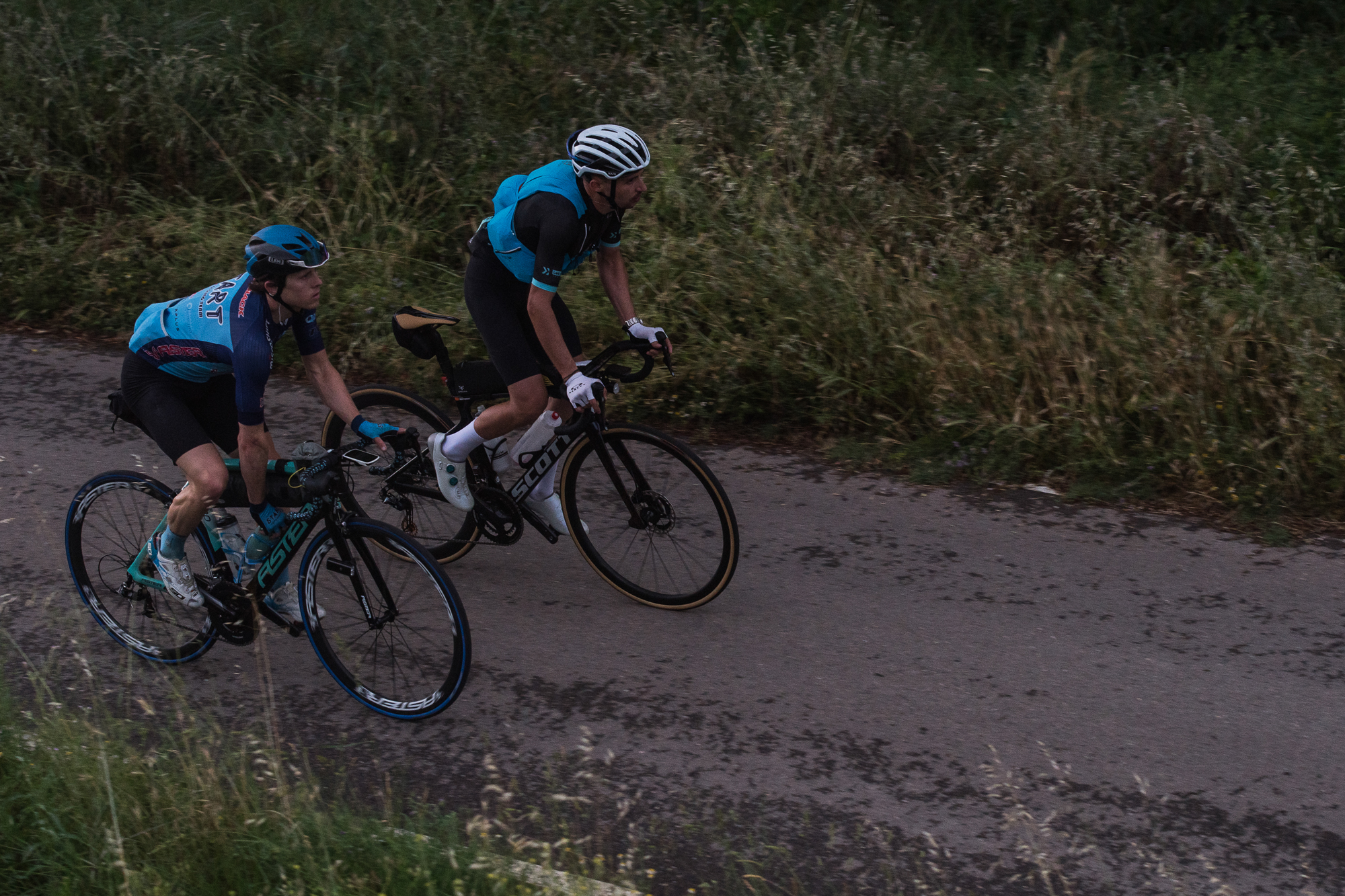 We went through almost all possible weather conditions. We had to face strong winds during the first kilometers of the event. We would later suffer under a light storm that didn’t last long but that got us completely wet. It stopped for a while, but after the sunset we experienced a similar situation again, this time lasting 4 hours.

With the night already behind us, it was time for a clear sky and boiling temperatures. During the first part of the morning, we really appreciated the good weather, but the situation during the afternoon intensified and our bodies felt that, making it tougher. Without any doubt, the weather was one of the most important factors of this first edition of PedAlma Madrid-Barcelona.

Regarding the route, we had to acknowledge that it greatly exceeded our expectations. We had the chance to visit beautiful villages, ride through inhospitable roads that we never imagined that exist, and discover some really beautiful natural sites, like the “Cañones del río Mesa”, the “Pantano de la Tranquera” o the “Camino del Cid”.

The journey to Barcelona was not easy, mostly because of the lack of rest, but like in each of the adventures we have been involved in, in the end, we always finish with the sense of having lived an incredible experience despite all the suffering.

To sum up, we covered 685km in total and accumulated 6.774m of elevation gain. The event started on June 11th at 6 pm in the Margot Moles sports center in Madrid, and the finish line was located in Plaza España, Barcelona. We arrived there at 2:45 in the morning, after 27 hours of riding time and almost 33 hours of total elapsed time, taking into account the stops to eat, fill the bottles, and things like that. Sleeping time: zero seconds. 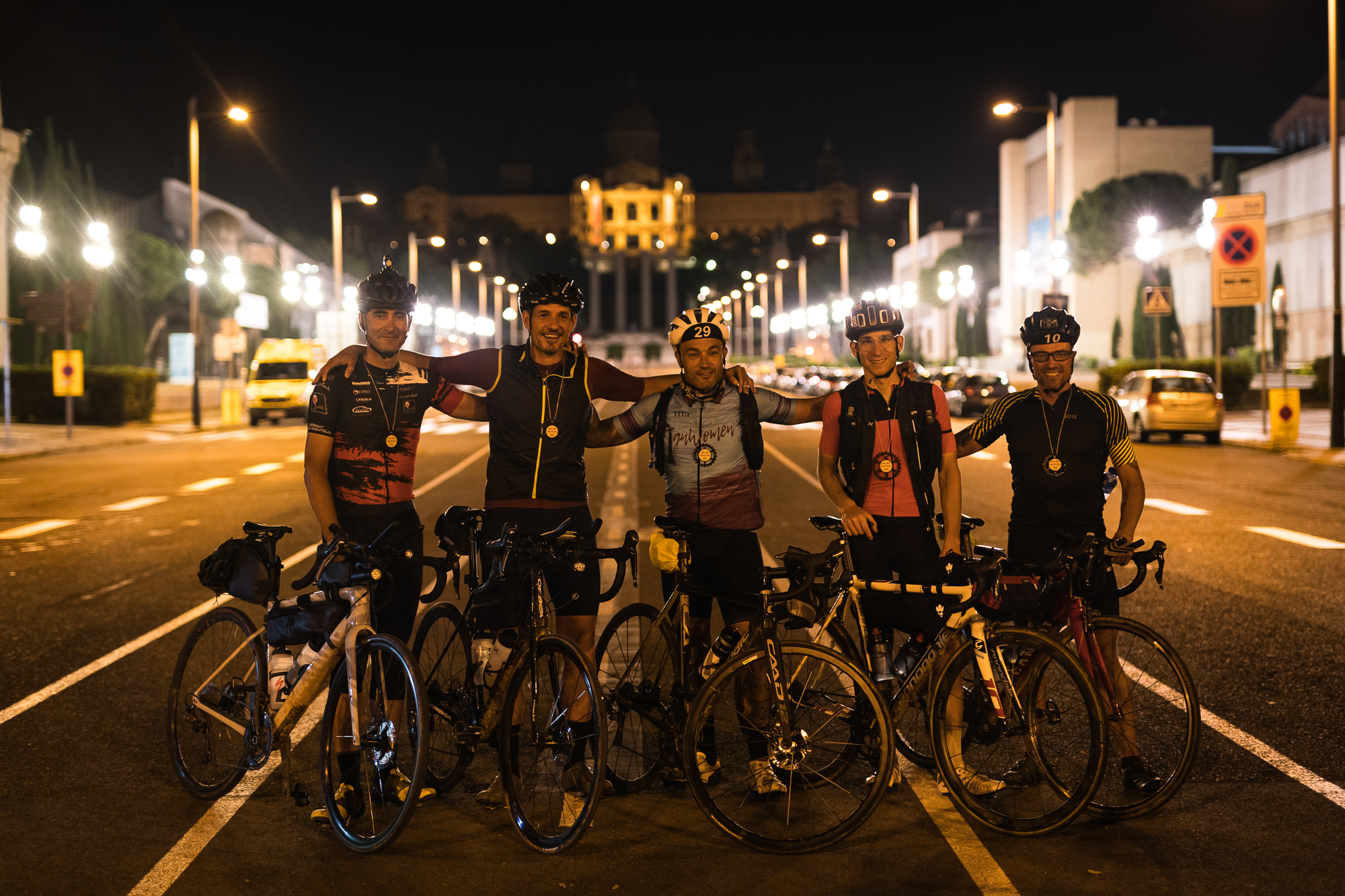 One of the best parts of an event like PedAlma Madrid-Barcelona is meeting new people and spend some parts of the adventure with them.

On this occasion, we would like to talk about Sally McHugh, an Irish girl residing in Girona for the past few months, who really impressed us with her performance and mental strength. It was the first proper long-distance event for Sally, and she crossed the line as the first female rider.

Did you prepare for the race with some specific training?

“My weekday training did not change very much in preparation for this event. But my weekend mileage increased significantly, and I was getting two big rides in on Saturday and Sunday. I did 3 bigger 10 hour days and practised doing them solo which is always a bit harder, but more similar to the conditions on the day! As part of my prep, I also signed up for the Traka 360 in May which was 4 weeks before PedAlma Madrid-Barcelona. It took a lot more out of me then I expected though! I had not practised cycling with weight on my bag or cycling in the dark, which I should have incorporated this into my preparation.”

What was your initial plan before starting the adventure? Did the reality exceeded the expectations?

“As this was my first ultra (besides the Traka I guess), I didn’t really go in with much of a plan! People kept asking me in the run up what my strategy was, and there really was none! Lots of people gave me different bits of advice, but for these kind of events, I do not think that one size fits all and I was excited to learn and discover my own limits.

I knew that I had to eat and drink as much as I could early on, and to try to maintain that throughout. I also planned to sleep for a few hours, but for exactly how long, or at what stage in the event, I was going to decide based on how I felt on the day. The reality was that on the day I ended up not really sleeping at all! I took my time at each of the five checkpoints to fill up on fuel and water but didn’t take any naps. In the last 200km things definitely started to go downhill though and there were too many stops to count or even remember. Around km 600 I started to hallucinate – I thought I was cycling with a friend who was riding the last 5-10 minutes into Barcelona with me. Thinking that I was so close to home, it didn’t seem necessary to fill up on water or food. Km 641 I was getting really angry and couldn’t understand why we were not at the finish yet and taking such a hilly route home. So I ‘left my friend’ and got off my bike to take a breather – not realising how weak I was without having had any food or water for 40km, I fell asleep on a path. I could have been lying there for hours but thankfully I think it was only 20minutes or so. I found a nearby food stop, filled up on sugars and smashed the last 40km into Barcelona!

I never experienced anything like that before, and it was only the following 24 hours that I could put the pieces of the puzzle together. I went in to test and discover my limits, and I most definitely did!”

From your point of view and your experience, which are the key points to perform in an event like this?

“Based on little experience but a lot of learning after PedAlma Madrid-Barcelona, I think going in physically and mentally fresh, with a positive mindset is hugely important – you are out there for so long on your own and if you begin to doubt your ability it’s a downhill road and will only add to an already difficult challenge ahead. I also think preparing for the worst is extremely important – if the weather says a heatwave for 48 hours, still bring a rain jacket. My biggest learning lesson from this event was the importance of good lights – they can really make or break your efficiency in the dark, and I learned the hard way!”

Do you think that your results can (must) encourage more girls to participate in events like this?

“I really hope so! The more competition the better. Following on from PedAlma Madrid-Barcelona, I realise even more, that there is very little awareness out there for ultra-events. So many woman messaged me afterwards. First congratulating me, and then telling me I was crazy. They even said that they didn’t know such events even existed! Although much more woman are now participating, it would be really great to see more females participating in events like this to even out the playing field. I really feel that in particular in long distance events, females are just as capable and can compete at the top level against men. I hope that my 5th place overall, encourages and inspires more females to participate. One of the things I enjoy most about this cycling discipline is the environment surrounding the event, the interesting people it attracts from all different backgrounds and it is really important for us to get the word out there!”

What’s your favorite and worst part of this kind of events?

“I love the preparation that comes with these events – having an excuse to go out on your bike exploring Catalonia all weekend and sharing the experience with friends on the gravel or road, is amazing! But also that feeling in the final 50km when you realise that you actually are going to make it over the finish line after the blood, sweat and tears endured, is a really amazing feeling and I tried to appreciate every kilometer of it. I was doubting myself at so many different points throughout the event and crossing the finish line just after midnight, to see my friend smiling waiting for me, was an amazing feeling. My least favourite part would have to be the week leading up to the event – all the work is done and now you just have to sit around waiting, preparing bits, and trying to maintain positive thoughts, but struggling! I get really nervous and anxious beforehand, especially for an event that I have never done before – sometimes doubting my ability, anxious for the inevitable heat and mechanicals on the bike. I know that once I take a pedal, the anxiety will subside, but that final week can often feel the longest.”

PedAlma was born from the inspiration of two cycling fans who want to share their passion for cycling. It is a project that seeks to create adventures, propose personal challenges, discover the nearby environment, enjoy nature, and the simplicity of traveling by bicycle. 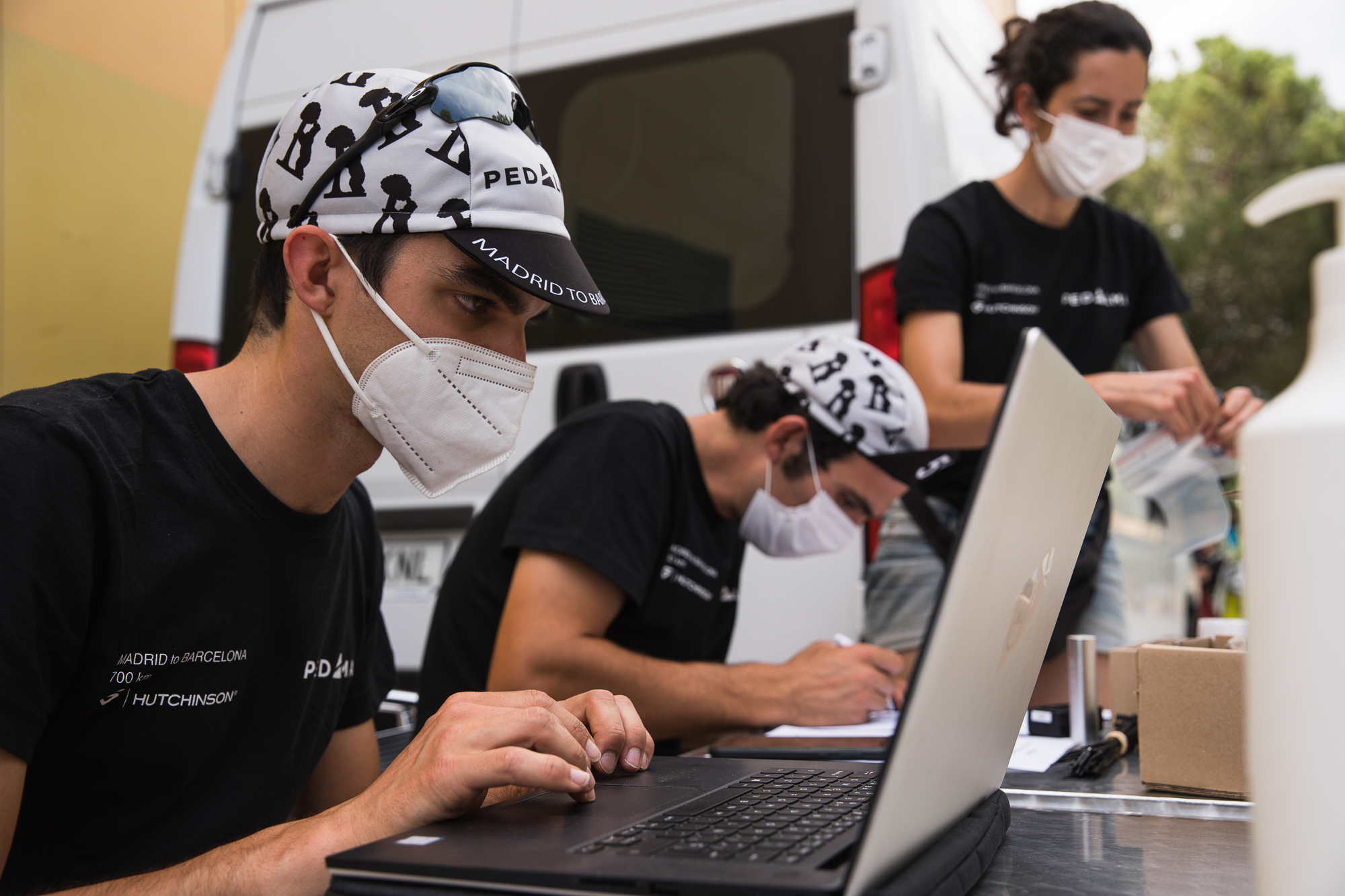 From the organizers’ perspective, although it was the first event they organized, one has to highlight the good work done by Oscar, Ramón, and all the team to guarantee that everything went according to plan and that all participants could enjoy a unique experience.

From our side, we would like to congratulate PedAlma for this small but big event and encourage them to continue working to be able to be involved in more of their projects.