France, in cycling terms, is a country especially known for hosting the biggest of the three Grand Tours on the calendar, the Tour de France. Although the majority of the toughest and most emblematic mountain climbs of this race are located in the Alps or the Pyrenees, the country has also other incredible places to ride your bike.

On this occasion, we would like to introduce you to Nice, a coastal city located in the south-east of the country, within the Alpes-Maritimes department. Like Girona, it has become one of the favorite destinations for professional and amateur cyclists.

Last weekend we had the opportunity to visit the city while being able to watch Paris-Nice live, and we were able to see first-hand everything about this beautiful city and realize why it has become a destination for many cyclists. 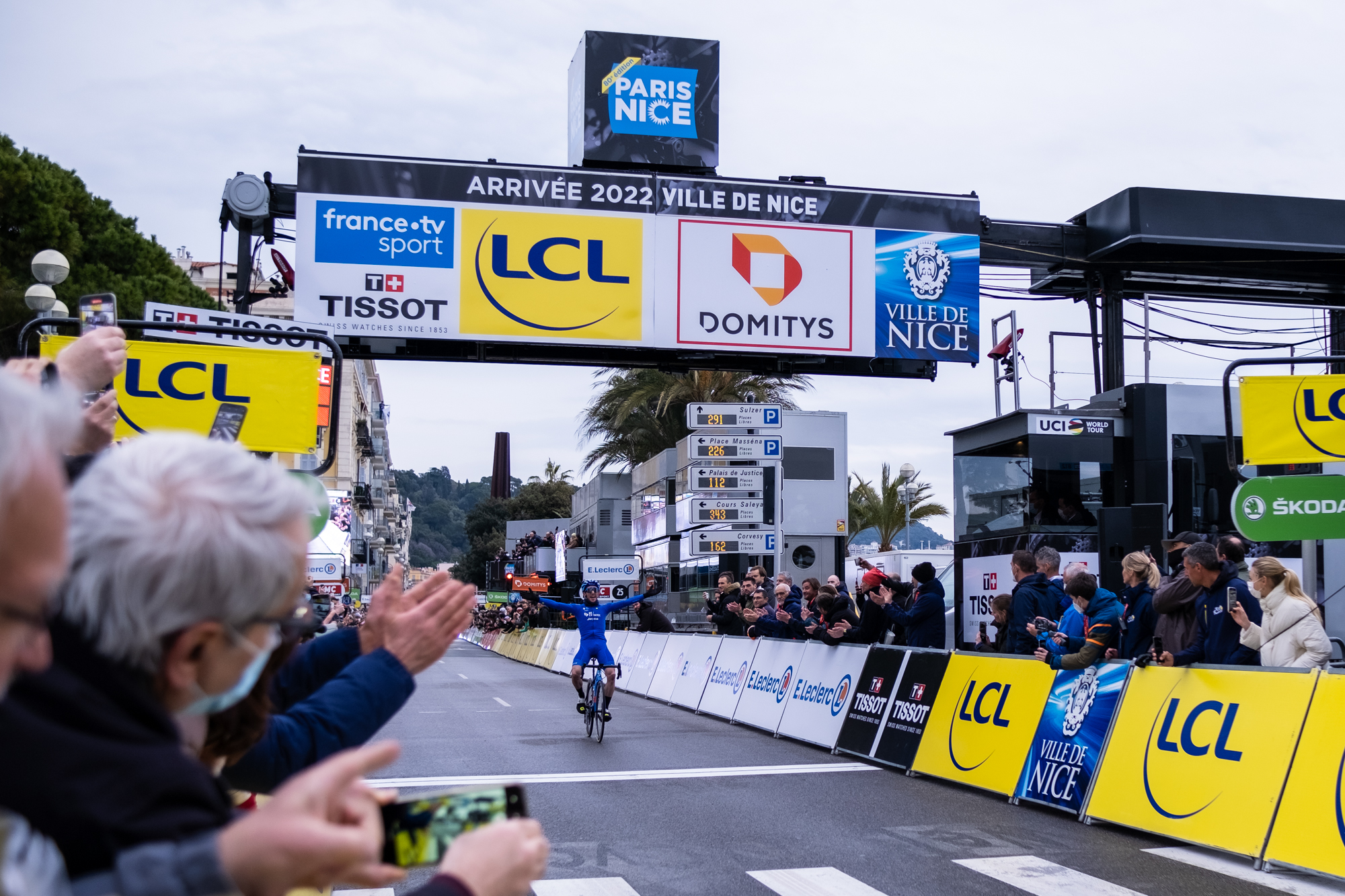 Epicentre of the Côte d’Azur

In addition to being a very important tourist attraction, especially during summer, Nice is a city visited annually by thousands of cycling enthusiasts.

It has its own airport just a few kilometers from the city center and a great connection by public transport. This aspect may not seem very relevant, but when it comes to a cycling trip and you travel with multiple pieces of luggage and a bike suitcase, being able to reach your accommodation in a few minutes after landing, without the need to make transfers or long journeys, is greatly appreciated.

As with Girona, the Mediterranean climate and gastronomy are other strong points of this city. On the one hand, being a coastal city, the temperature is pleasant during most of the year. On the other hand, its proximity to Italy means that Nice has an important and quality gastronomic variety.

Nowadays, drinking good coffee while cycling has become a habit, whether before, during or after the bike ride. And of course, in Nice we can also find very good options to enjoy a good coffee and, if necessary, also a sweet treat. 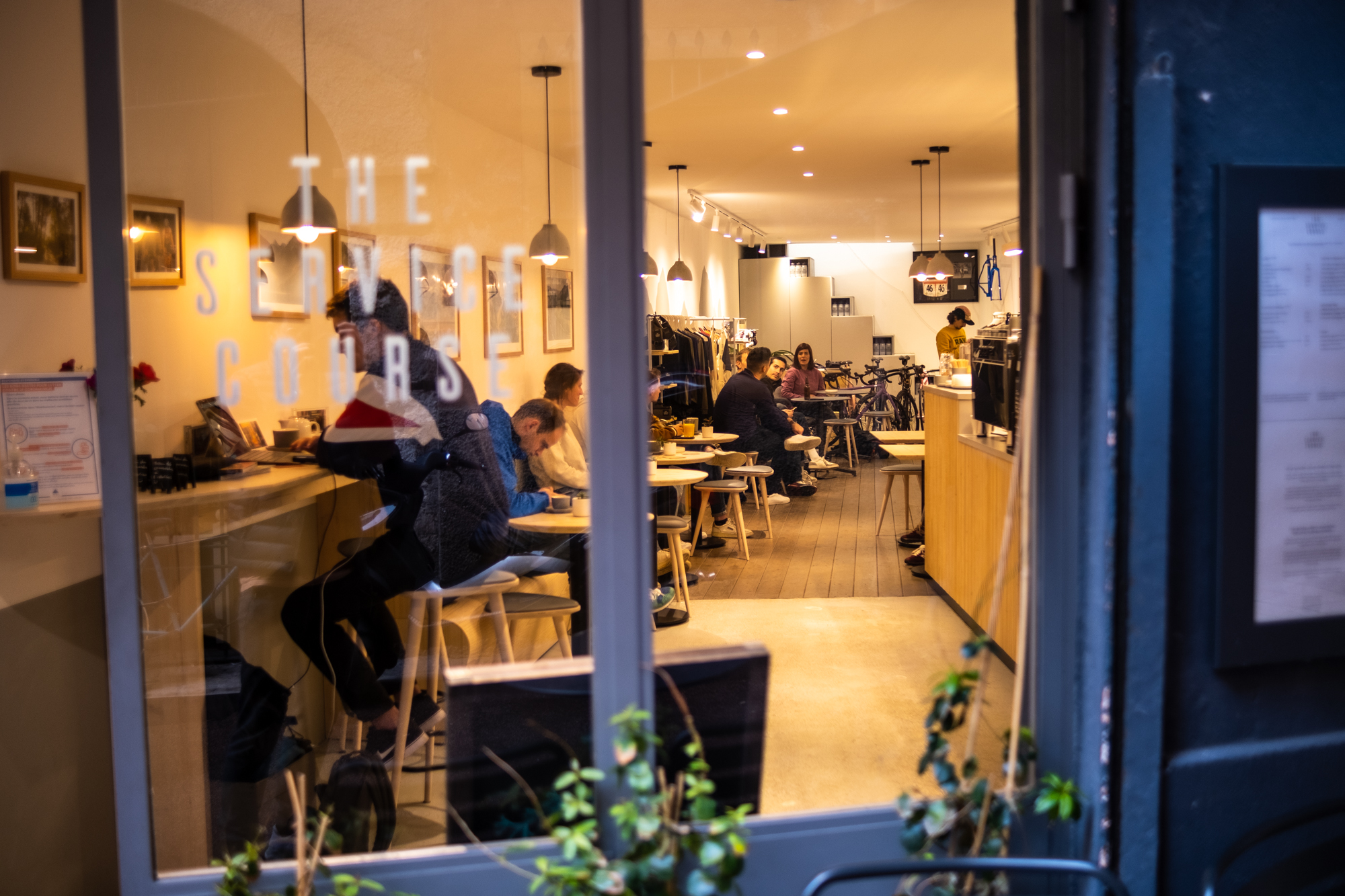 During our stay there, we had the opportunity to visit The Service Course, which was celebrating one of its bike-experiences for clients and also the first anniversary of its opening in Nice. We shared a few kilometers with them during their well-known Sunday Salida, we had coffee, we talked about cycling and we were even able to enjoy the emotion of the last stages of the Paris-Nice in the first person. Without a doubt, TSC is one of the favorite places for many professional and amateur cyclists who come to Nice in search of specialty coffee.

Another great option, either looking for good coffee or cycling essentials, is the Café du Cycliste concept store. Located in Port Lympia, the store offers a wide variety of services for bike enthusiasts: cafeteria, rental bikes, tours, cycling apparel, etc. Without a doubt, these two points are one of the highlights of Nice if you ever have the opportunity to visit the city.

The most precious treasure of the Alpes-Maritimes

Behind the image of a coastal city focused on tourism, there is a wide range of routes to get into the Alpes-Maritimes area. Regardless of where you are located in the city, once you start your route you will highly likely start climbing right away, since a few meters from the center we have the start of some of the best-known climbs in the surroundings, such as Eze or Mont Chauve. However, we will not have the feeling of being out of it until we get a little further away, since villas and chateaux surround us as we go up, only allowing us to see the Mediterranean from time to time.

Another faster alternative to avoid traffic and hilly terrain is to head west, taking a wide bike path that will take us to the mouth of the Var river. From there we can quickly access further and longer climbs of the Alpes-Maritimes heading inland without having to overcome all the hills around Nice. Once we leave the urban area behind, and just before tackling the major climbs themselves, most of the roads run through the gorges of rivers, making us feel small and at the same time enjoy a landscape of rock and green and foreshadowing the gradients that we will have to face to reach the top.

One of the best ways to find out about the most important ascents and the most attractive secondary roads is to look at the yearly parcours of Paris-Nice itself. It is usually an early-season test for riders, with tough climbs without the need to fully enter the Alps, thus avoiding surprises since at this time many climbs can still remain closed.

When we refer to the Madone, many of us think only of the climb near Monaco, but further inland from the Maritime Alps is the Madone d’Utelle, a lesser-known but highly recommended ascent.

To get there, we decided to avoid the main road parallel to the Var river as much as possible and approached it through the north of Nice. We first climbed to Aspremont and then followed a winding stretch to Saint-Martin-du-Var. From there, the views of the gorge accompanied us to the first slopes of the climb.

Taking into account the fact that the ascent is not well known and that there are a couple of downhill sections on the way to the top, there is no agreement on the start or the exact length of the climb. The only certain thing is that in 25 km we accumulated nearly 1,500 meters of elevation gain, including countless hairpins and several unpaved sections. The west slope is the least frequented, but we did the right thing by going up that side as the descent would have been too dangerous.

Before reaching the highest point we already saw the snowy peaks of the High Alps, something difficult to comprehend as just a couple of hours before we were at sea level. Once we reached the top, we stopped briefly to appreciate the landscapes around us and began the descent, which in several sections had fresh tarmac, to Saint-Jean La Rivière.
Once the biggest obstacle of the day had been overcome, the desire to get to Nice was accentuated, but even with tired legs, we were able to enjoy the way back. From the town of Levens, the terrain was constantly downhill, and in the last section we had to cover the inevitable unpleasant kilometers typical of large cities, but still with the memory of everything we had enjoyed hours ago.

From the sea to the snow and back in just four hours. This route includes the passage through the Col de Turini, known for its hairpins. None of the slopes feature extreme gradients, and the ascent from the southeast, famous for the Monte-Carlo rally, is really steep, averaging 5.2% over the 24km climb.

This pass is the main link between the Vésubie and Bévéra valleys. The sea can be seen even near the top and the sea current of hot air is noticeable, frequently causing real downpours.

After almost 50 years of absence, the Col du Turini reappeared in the Tour de France in the second stage of the 2020 edition, which started in Nice. Due to its characteristics, views during the ascent, and relative proximity to the coast, the Col du Turini should be a must for local cyclists of the French Riviera and anyone who passes through the area by bike.

To complement the main climb of, we strongly recommend including the Col de Braus to the route, whether in upwards direction on the way to Turini, or when returning to enjoy the descend full switchbacks one after the other.

There are many options to get to the start of the Col de la Madone from Nice, each with its pros and cons. Leaving the city, one can climb the Col d’Èze, minimize the meters of elevation gain by going along the coastal road, or choose the main road which, although usually full of cars, has a good bike path and rewards cyclists with the magnificent views of the hanging village of Èze.

In our case, we went up to the Col de la Madone on a Monday. After climbing the Col d’Èze the day before and being warned that most drivers commute to work via the moyenne corniche, we decided to approach the climb from the coast. We were able to enjoy the views until shortly after arriving in Monaco, where we were thankful for riding our bikes when we saw the traffic jams at the gates of the Principality.

We got lost in the maze of Monaco roads, but finally managed to find our way back towards Menton. We started climbing from sea level, and there was not a meter of rest throughout the ascent until we reached the top of Col de la Madone, located at 922 meters of altitude.

Before starting the route we only look at the length and average slope. Being frequented by so many professional cyclists, we thought that the pass would pass through a wide and busy road, but we can count with one hand the vehicles that we encountered.

Luckily the best views came when we started to run out of energy, encouraging us to keep pushing. We left the views of the sea behind to enter the mountains and feel part of them. We covered the last few kilometers in awe and, if it weren’t for a small monument that was unveiled last year, we would have reached the top of the climb without realizing it. The mountains covered the descent road in the direction of La Turbie, so after the rain last night the asphalt was really wet.

An extra addition for the route can be the ascent to Mont Agel. This cul-de-sac has a high average gradient that your tired legs will feel right away after the previous long descent, but the views of Monaco are worth it.