Continuing the series Places to ride, on this occasion we got in touch with Pedro González Betancor, a photographer from Gran Canaria whose job and passion revolve around cycling. Expert of the deserted and empty roads far from the crowded areas of the isla bonita, we wanted to hear from his own words his favorite corners of the island and to share it with all of us.

I am 32 years old, I have spent most of that time riding a bicycle, either a BMX, a fixed gear, a road bike (for the last four years), or a gravel bike (two years ago). Thanks to cycling, I was able to get to know better the roads and trails of the island but, above all, I could enjoy them in a very different way from when you are driving a car. I will focus on the northern part of the island since it is not so well known to visitors because all tourism is concentrated on the south. Without any doubt, the north is my favorite part to ride. This area is composed of small towns linked together by an endless network of roads and trails, which gives you loads of options to plan or improvise a route. 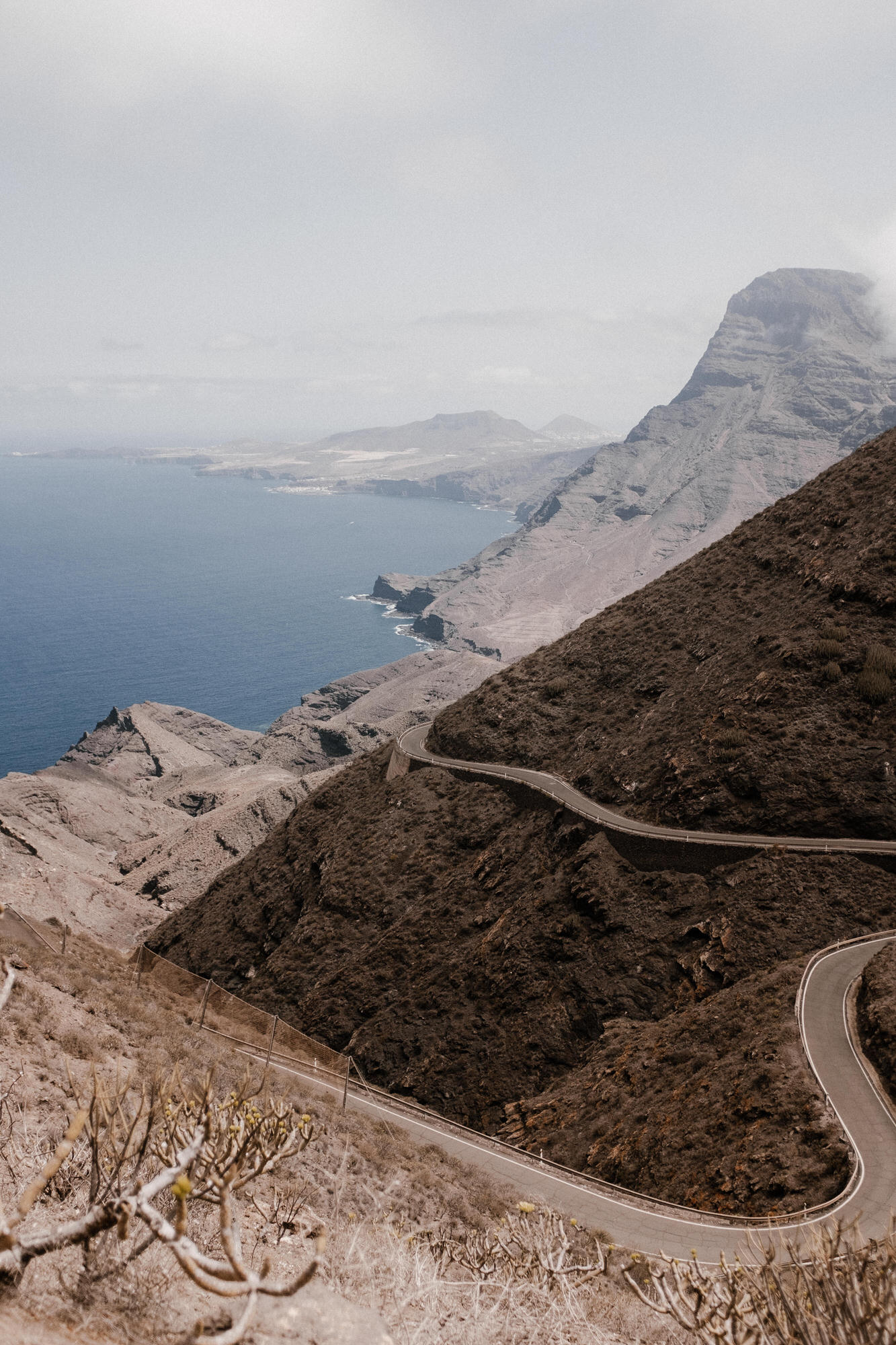 The first route consists of a mixed-terrain track, which will take us from the coast up to the town of Atenara at 1270m, passing through the Finca de Tirma along an 18 km gravel road. The departure point is Las Palmas de Gran Canaria and we will ride along the northern coast of the island, riding through several towns such as Arucas, Moya, Santa María de Guía, Gáldar, and Agaete. The route from Agaete to the beginning of the gravel section in Tirma is one of the most spectacular ones on the island, bordering the mountain range of Tamadaba and passing underneath Risco de Faneque, one of the highest cliffs in Europe, with its top at 1027 m above sea level. In this section, we will come across the neighborhood of El Risco de Agaete, a mandatory stop before starting the climb to Artenara. Once we reach the beginning of the trail, after around 60 km of tarmac, we will be able to enjoy superb views of the cliffs from the viewpoint of Andén Verde. The Tirma gravel trail is 18 km long and will guides through the natural park of Tamadaba before reaching the house of Tirma. Once there we will head to Atenara, where we should stop before starting the descent. 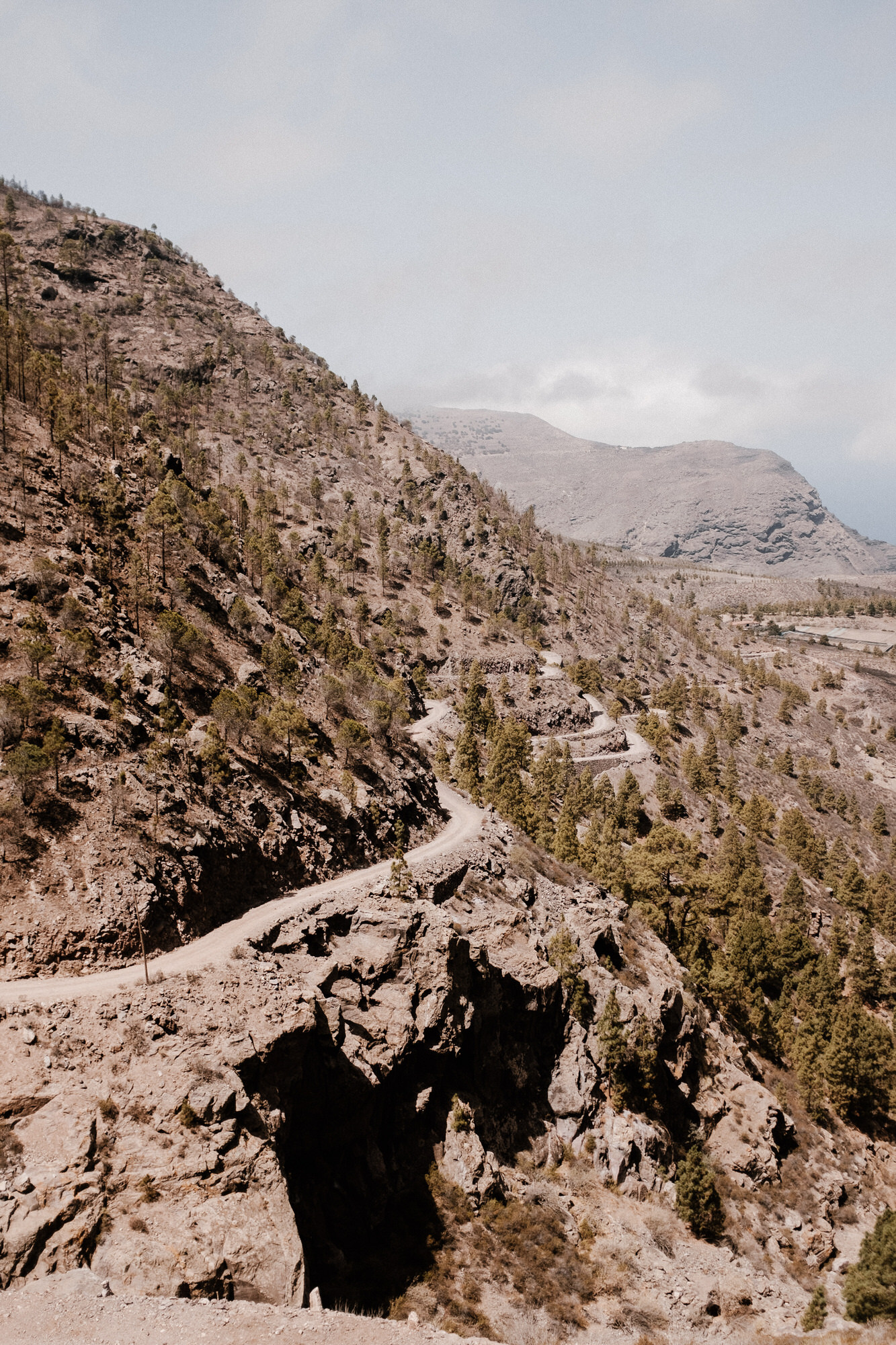 My second proposal mostly passes through secondary roads and takes us into the northern valleys and cliffs. As in the case of Tirma route, we will start in the capital and we will head north towards the first climb of the day to Fontanales neighborhood in Moya, a very recommended stop before heading to Fagajesto. As I said before, the north is full of roads, which allows you to go from A to B through different tracks. For this route, I chose to arrive at Fagajesto using a road that passes through Juncalillo and a region known as Monte Pavón. After a short descent, we will reach Fagajesto and we will start the second climb along a road that surrounds the edge of three dams: La Presa de los Perez, La Presa de Lugarejos, and La Presa de Las Hoyas. Once we get to Artenara we will go towards Tejada, known as one of the most beautiful towns in Spain. We will leave Tejada behind and we will start the third and last climb to Cruz de Tejada, from where we will be able to enjoy the views of the Caldera de Tejada before heading back down to the capital.

I hope I have teleported a piece of the island into the screen of your cellphone or computer and that, for a moment, you have felt the same way I do when I ride through the isolated and beautiful corners of Gran Canaria.

Little by little, the gravel scene is becoming a worldwide…

It is winter in the northern hemisphere, so probably not…