Squid Bikes, established in Sacramento in 2014, is one of those bike brands that do not follow the typical standards. Tired of dull bike paint jobs and logos on their frames that did not represent them, a group of four friends had the idea to paint their own bikes with rad designs and allow others to do the same. This is how Squid Bikes was born, and over the years it has brought some impressive, wild, and unorthodox designs to the cycling scene, with new textures and a whole spectrum of different colors. Some days ago we had the chance to talk with Emily Kachorek and Chris Namba, co-founders of a brand that is steadily growing and from which we can expect amazing things in the early future. 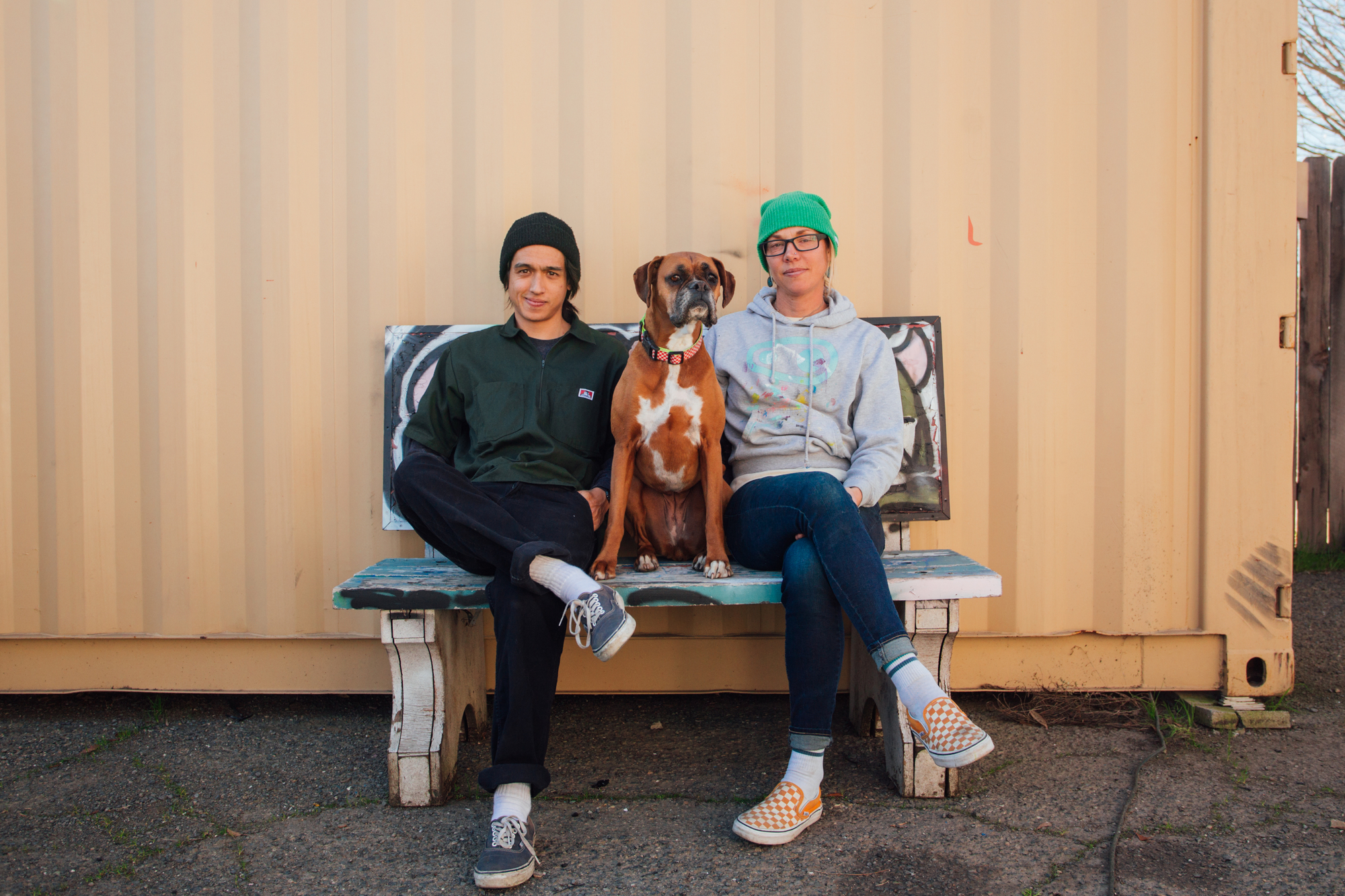 Squid Bikes is a growing project and company, how did it all begin?

(Emily) Around 2014 I was racing cyclocross professionally. I had been competing in the road for a while and in 2012 I tried CX for the first time. I loved the scene, more relaxed but racing was also tough. There was discipline, training, and suffering, besides the mud and rough race conditions. I was focused on the CX program, but I felt like something was missing. Everything felt so serious and we wanted to remove that stigma. Then, Chris, Peter, Marty, and I decided to start painting our bikes and we ended up putting together Squid Bikes.

What was the idea behind that?

(Emily) Our intention was to create frames that looked totally different than the big brands. Bikes that looked fun, were not boring, and that could reflect your personality. The aim was to provide an affordable frameset that you could easily customize without requiring long and expensive production processes.

How did you start the first frames?

(Emily) We got in touch with a local builder in Sacramento, who could easily produce cyclocross aluminum frames. Chris was the one in charge of the designs and the geometry of the bike. We started producing raw frames with no paint and encouraging people to self-customize them. In the beginning, we would only sell them raw, but we started to gain experience, trying new spray paints and techniques, and now you can get them painted.

What options are there available?

(Emily) We have mastered 8 styles and we have a wide palette of colors from Spray.bike to choose from. Also, the finish can be either matte or glossy. So, just let us know your preferences and we will do our best. However, we always encourage you to get your own spray cans and do it yourself. It will be your bike and you’ll feel more attached to it.

How does the paint job compare to a bike produced by a large company?

(Emily) First of all, it is handmade. So, it will be a unique, one-of-a-kind frame. The paint might not be as durable because of the sprays we use, which don’t have as many chemical products as industrial ones. However, the possibilities are infinite. The sprays’ paint is more natural and in tune with the environment. If you think of it, we might be helping the planet; frames are produced locally and spray-painting is more eco-friendly than industrial painting.

Any advice for someone who wants to try and paint the bike?

(Emily) These are not works of art, bikes are made to be used. It is not rocket science. Just have fun with it. Try to experiment, it’s okay to mess up and do it again. It will be your bike, so make it yours. We like the hashtag #DIYFS (do it your fucking self), and I believe it represents us. We want you to get creative, so don’t be afraid and try new things.

What models do you have?

(Emily) We started with the ‘Squidcross’ cyclocross frame, for obvious reasons. We started producing a BMX frame also in aluminum, called ‘Shred to Ed’s’, which I think is now sold out. The next one was the ‘Fuck off Johnny’, a MTB hardtail. There is a fun story behind this name. We were swimming in a local spot with Paul, from Paul Component, and he started asking for the BMX frame name. Was it ‘Screw off Suzzie’, ‘Fuck off Johnny’…? We had a huge laugh and we saved that name for the MTB frame. We later produced two steel road bikes in collaboration with a Japanese artist for the North America Handmade Bicycle Show (NAHBS). We also have an aluminum track bike ‘Trackwondo’ and a steel one ‘SO-EZ’ designed for wider tires and tracklocross.

You also produce steel bikes, how did that happen?

(Chris) We had in mind the idea of producing a tracklocross frame, and we were reached by Spray.bike and BLB to collaborate together. BLB took care of the production (made in Taiwan) and the distribution in Europe. It doesn’t come raw, since it is made out of steel, but it is anti-rust coated with a black finish. In spite of that, we love it because people paint them anyway, which is the spirit of Squid.

Could you explain the evolution towards tracklocross?

(Chris) Tracklocross consists of taking your fixed gear bike, putting on some wider tires, maybe flat bars and smaller gear ratio, and having fun out there. My first race was in 2015 in the Bay area, and I loved it. I started getting more involved, racing and organizing events. I had an All-city bike, but I was not convinced about the geometry and tire clearance, so I tried one of our ‘Trackwondo’ since I could fit a 32c. It didn’t feel right, so I started designing a new frame. It was too expensive to produce in aluminum but affordable in steel. Luckily we got the collaboration with Spray.bike and BLB. So far, the ‘SO-EZ’ has been our most successful model with more than 500 sold units. It is an aggressive bike with steep angles and a high bottom-bracket, like an early 2000s CX bike.

Last year (2019) was the first tracklocross World Championships, what can you say about that?

(Chris) Japan had many events, and on a trip there a friend and I decided to organize something big. It came naturally, we wanted to create a sense of community among everyone. Japan appeared to be the perfect place, we had already organized the US Nationals, and that year the Cycle Messenger World Championships was taking place in Indonesia. We set the right dates so that people could easily travel to both events. We got people from the US, Australia, or Germany going to both. This year’s World Championships were supposed to be in Sacramento, but we will postpone that for 2021 and Barcelona for 2022.

What can you say about the team?

(Emily) When we started Squid we were fully invested in cross, riding the whole UCI and World Cup calendar. Anthony Clark, Sammi Runnels, and I were competing and Chris was the mechanic. We got to travel a lot and we met a lot of people. The team grew up with new incorporations, new bikes, and different styles of riding. For example, Ben Gómez-Villafane is still competing in CX at a top-level, but then there is Nico Deportago-Cabrera who focuses more on long-distance events. Since 2018, when both Anthony and I stopped competing, and this year with the global situation, our aim has changed a bit. We opted to diversify and branch out of professionalism to invest more in people who like riding their bikes. We are more about values, like racing for fun, enjoying every single moment, good and positive vibes, giving 110% in every ride, and not focusing on results.

What is the next step for Squid?

(Chris) We are working on ‘Gravtron’, a steel bike that will be a mix between a road, gravel, and CX bike, basically an all-rounder that you can ride anytime, anywhere. A special feature is the number of holes for bottle cages it has, a total of five (three on the frame and two on the fork), so that you can go bikepacking as well. So far Nico has been testing it and production should start soon.

Any surprises for the not-so-early future?

(Chris) For 2021 we are expecting to release an updated ‘Squidcross’ with flat mounts for the disc breaks, larger tire clearance (even though now it’s already wide, 40c), and a slight change in geometry to make it more race-oriented. We are also trying to make some handmade steel frames on our own. We already started but we need to make a new fixer to fit modern frames. By this, we will be able to provide customers with special bike projects and we won’t have to manufacture whole batches of bikes. And always, with rad and unique paint jobs.

The typical season of a professional cyclocross rider is pretty…