With all due respect to their own identities, last Wednesday’s Diegem Cross felt like the perfect mix between the tradition of Belgian cycling and the vibes of Red Hook Crit, including night racing and crowds looking for something beyond what’s pure competition.

A 7 PM start for the women and 20.45 PM for the men on a weekday is not something that we are used to seeing in cyclocross, and while we welcome it with open arms, it took riders out of their comfort zone.

The Diegem Cross did not take place in the last two years due to the pandemic and financial reasons, but it was worth the wait. We knew the muddy conditions that riders would have to face because it had been intermittently raining the whole day, but we didn’t expect such an impressive atmosphere, with people of all ages eager to watch the best riders of the discipline.

Same as in the Six Days of Ghent, it was easy to guess where we were, taking into account the number of food stalls with fries around us. Also, there are few regions in which the spectators cheer for the riders with so much passion.

This race has traditionally been raced at night and with artificial lights, which reminded us of the good old days of fixed-gear racing. Could you imagine Van Aert, Van der Poel or Pidcock racing without brakes in the streets of Brooklyn? This alternative format may be just an exception in the CX calendar, but it clearly proved to be a success. In Catalonia there is also a cyclocross race of this type, the Dark Cross.

In the middle of the Christmas block of cyclocross races, with the “big three” in the startlist, and with the race taking place in a unique setting, everyone, both riders and cycling enthusiasts, wanted to be present. 83 women and 91 men had the chance to shine in the streets and football fields of Diegem, so there was a constant flow of riders passing by. Until Van Aert, Van der Poel and Pidcock came from behind and prevented most of them from finishing.

Mathieu van der Poel was unbeaten in Diegem, as he had won the race in each of his ten participations, including the youth categories. One could see why, as he surfed over the sand section like no other, creating gaps over Van Aert and Pidcock that forced them to push extra hard to close it over the rest of the lap.

This race dynamic delivered exciting moments from start to finish, which delighted the 20.000 spectators that gathered in Diegem, a town just outside Brussels, for this nocturne race. The outcome was also one to be remembered, with Wout Van Aert winning this race after a hectic last lap which saw him and Pidcock exchange positions multiple times. A minor mistake by the British in the second to last turn ended up being decisive for the win. 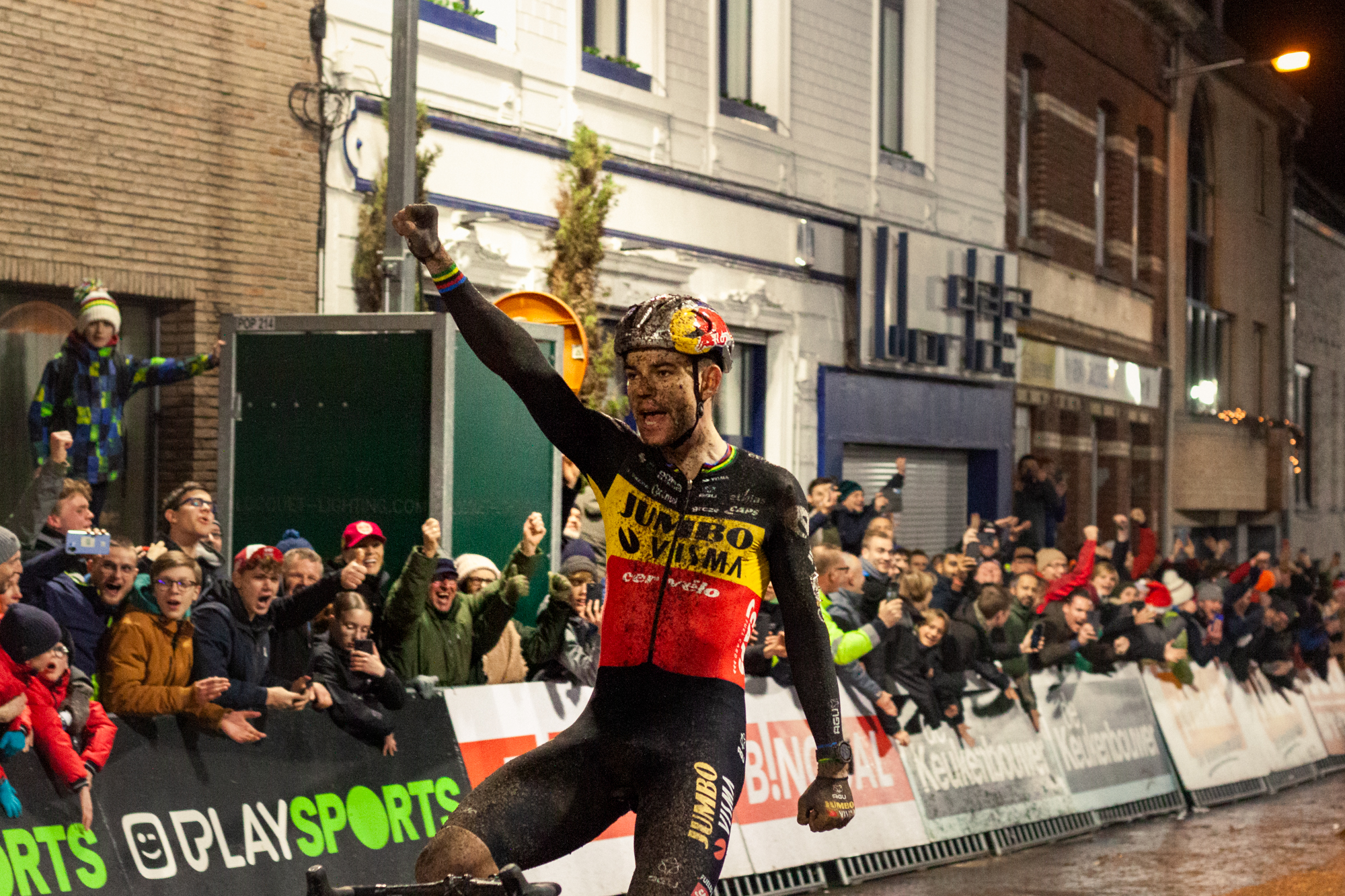 We were privileged to watch the Superprestige Diegem firsthand, but from our point of view it was difficult to be fully aware of what was happening in the race unless we came closer to one of the multiple big screens. The ones watching at home had the complete picture and finished the day with clean clothes, while we ended up covered in mud.

One thing is true, we could guide ourselves by the cheering of the spectators to infer what was the current location of the ones in front of the race. With every move by Van Aert, the decibels of the venue increased so much that the race commentator could be barely heard.

Given how late the race ended, the riders hurried to get back to their team camper as soon as possible to try to get back home at a reasonable time. Nonetheless many spectators stayed in the venue for longer; emptying the kegs of beer that were left and giving it all in the ambiance tent that was set for the occasion.