Little by little, the gravel scene is becoming a worldwide phenomenon. Already established in the USA and in the majority of Europe, it is slowly finding new enthusiasts in countries like Colombia. Mauricio Ordonez and Ricardo Muñoz, two friends passionate about cycling, tell us about how they saw an incomparable opportunity with tons of possibilities to introduce this cycling discipline in Colombia. With this purpose, between May 21 and 28 they have organized the bikepacking race Transcordilleras. This will be an 8 stages self-supported bikepacking challenge designed for gravel bicycles that will cross the three mountain ranges of the country; from the eastern to the western passing through the central one.

Like for many of us, gravel appeared as a gradual transition from road cycling to those unpaved roads and dusty trails non-accessible on thin-tire bikes. Colombia is a country that revolves around the cycling culture, with road cycling being the most popular discipline. Besides very varied geography, the country counts with rather constant weather throughout the year, therefore, there is no need to have a bicycle for every season of the year.

Despite that, it is a country where a wider tire grants you the chance to exponentially increase the number of accessible routes. Many of the roads are not paved, thus, the lack of infrastructure makes Colombia the ideal place to explore with a gravel bike. Mauricio and Ricardo realized that and, in 2016, they submerged in the discipline. At that moment nobody had a gravel bike yet but, bit by bit, more friends started joining them. Nowadays the community is gaining more supporters throughout the country, for example, Mauricio lives in Medellín whereas Ricardo in Bogotá. Also, Mauricio has become the dealer of Open in Colombia.

Origin and motivation of the event

Due to historical reasons, the Colombians tended to live in the mountains, which translated on a wide network of roads that connects towns and valleys by means of mountain passes. The central region of Colombia is defined by the Andes, and it is divided into three mountain ranges: eastern, central, and western. With the aim of getting deeper and discovering the country, Mauricio and Ricardo embarked on the challenge of connecting the three mountain ranges by bike through the shortest bikepacking gravel route, and Transcordilleras appeared.

Gravel allows you to reach places and small villages where you would not get otherwise, riding through roads restricted for other types of bicycles. Moreover, carrying all the required material with you at all times allows enjoying every moment without any pressure, stopping to try local food, making detours of the initial track, and improvising depending on the sensations.

The main idea behind the event is to create a large community around gravel and to enjoy nature again after the lockdown period. Thus, the event was opened to everyone, but with limited available spots, and what was going to be a route between friends turned into a race by stages. Being the first edition and having participants with different levels, from the expert on ultracycling to the amateur cyclist, the race was envisioned as an opportunity to get introduced to self-supported bikepacking, creating awareness of the culture, and making new friendships.

Logistics for the race

Beginning in Yopal (eastern range) and arriving in Tadó (western range), the route is 1.150 km long with a total elevation gain of 25.000 m divided into 8 stages (an average of 140 km and +3.000 m each day). Therefore, even though this will be a friendly challenge, nobody said it would be easy.

The participants will have to carry all the material in their bags, like food, clothing, or tools, except camping material, since it is very recommended to sleep in hostels and hotels at the finish-towns. By this, the organizers pretend to strengthen the sensation of community and make the adventure more secure. With the same intention, and due to the lack of infrastructure in some parts of the route, there will be a sweeper car that will pick up those participants who might have suffered some misfortunes and avoid possible dangerous night scenarios.

However, the event is still a race. The time of each stage will be timed so that participants will have to decide if they want to go as fast as they can or they prefer riding in a group and enjoying the surroundings at their own pace. In any case, the current leader will be punished (or rewarded) by carrying a teddy jaguar during the stage. 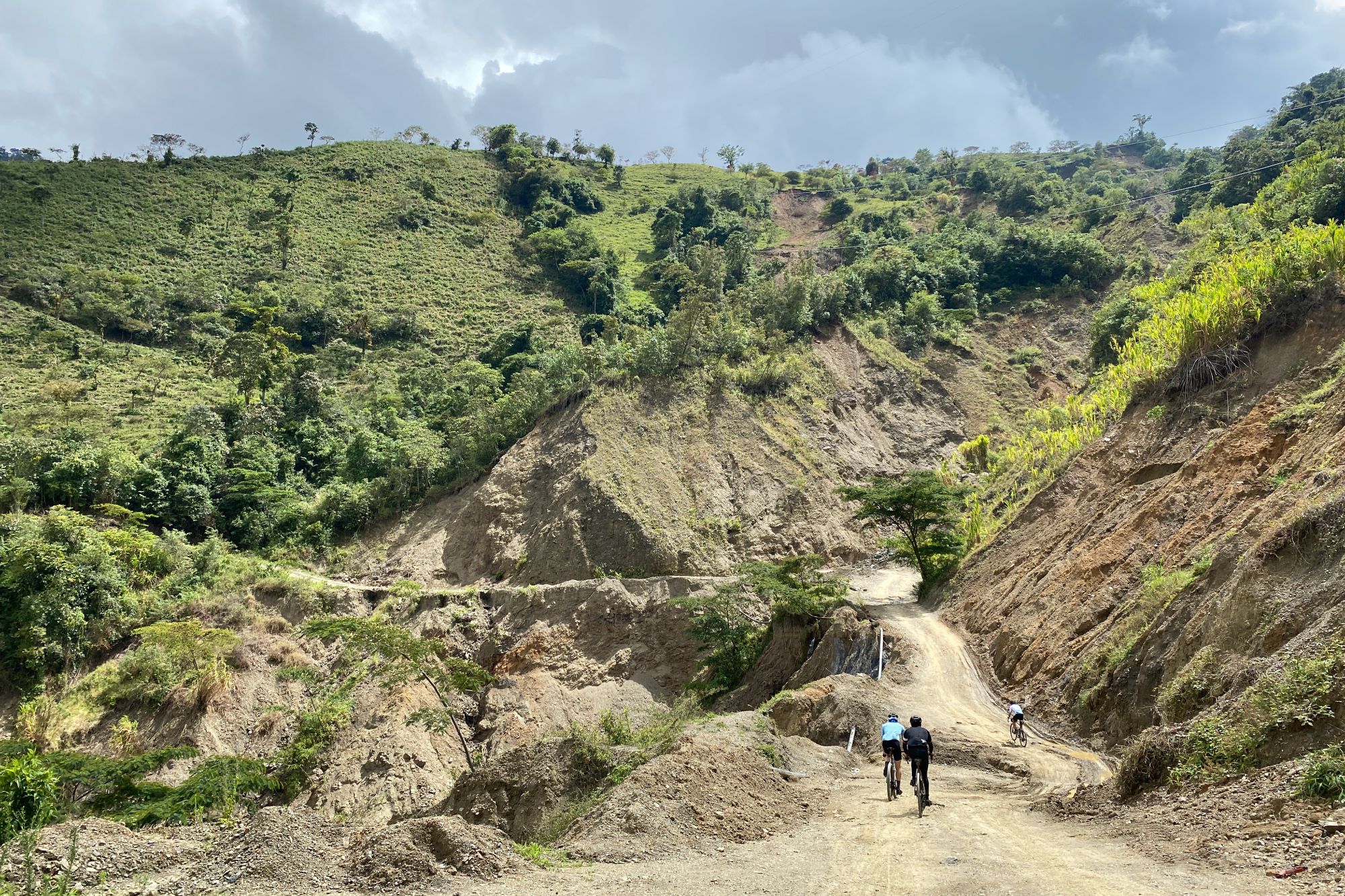 The event’s track is not random, but the result of the work of Mauricio and Ricardo after exploring and adventuring on their bikes into the diverse landscapes of Colombia. They have not yet connected all the stages on a single trip, but they have made several short multiple-day expeditions covering each one of the parts. This time it will be time to link them all.

The first stage will start climbing the eastern mountain range, already reaching 3.500 m above the sea level at the Páramo. Later, it crosses the Cundiboyacense high plateau and ghost towns like San Cayetano before starting the descent towards the Magdanela river. After the downhill section, reaching almost 200 m, it will be time to go up again to summit the highest point, the Páramo del Chilí at 3.800 m, an actual challenge that will be the key stage of the route. Finally, before reaching the western mountain range, the track passes through the coffee landscape and, by this, it connects the three ranges. The difference in height will allow the participants to enjoy an ever-changing scenery, from the deep and humid jungle to the tundra at high altitude, a real panorama to be captivated.