While the Tour de France was taking place not long ago, Chris Hall was at the same time riding a minimum of 107 miles a day to raise awareness for the Pace Centre, a children’s school for kids with motor-based disorders.

The bar wasn’t set at random, as he has a special connection with the number 107. Historically, the charity provided their support and therapy to 107 kids, because it was the maximum number of people they could look after. In addition, this was the 107th edition of the Tour. His first challenge involving the Pace Centre was already built around that particular digit, and since then, it has been the common denominator of most of his challenges. The number is even inked on his skin.

To honor the French Grand Tour, he wanted to ride the real route of the Tour de France, but when it became obvious that travel restrictions would be an impediment, he relied on his creative sense to plan something in the UK, and he came up with the idea of reaching the desired distance while hitting all the extreme points (north, south, east and west) in the island. Planning wasn’t easy, as he didn’t want to ride much more than 107 miles (around 172 km) each day but he had to finish each day in a place with accommodation available.

Named 107TDF, this project started on the same day as the Tour, with the same rest days as the professionals plus an additional rest day, similar to the time trial for the cyclists riding in France.

The pro peloton had to face one of the toughest editions of the race, but the weather of the United Kingdom, in addition to the fact of riding that distance by oneself, made both feats similarly challenging. The UK is not the optimal place to ride, and it is usual to face a constant headwind that makes you mad and makes you think about your bad choices. One also has to add the uncertainty, because Chris had never ridden before most of the roads on the route. At some points, it was like heading into the unknown, although he had already taken into account any possible scenario.

Already from the beginning, Chris was overwhelmed by the amount of support he was receiving on social media but also on the road, with riders joining him each day and acting as a shelter when needed, because although during the first days the legs were still fresh, the more energies he could save for later, the better. During the course of the three weeks, more restrictive measures were implemented in the UK, so not everyone could ride side by side with Chris at the same time. Nonetheless, he may count with his hands the number of hours he rode on his own.

Vertical legs, self-massaging, foam-rolling… After arriving at the accommodation, Chris made sure to start the recovery process as soon as possible. Once again, everything counts when talking about such a hard and long challenge. The only way pro cyclists keep performing at a high-level day after day is because of how effective they are at recovering, so anyone who tries to accomplish something comparable needs to take notes from them.

On day 4 he arrived at Land’s End. After 5 consecutive days riding more than 107 miles, he took his first rest day. This easy day was already planned, as most of the elevation gain was contained in the first week. The additional “easy day” for the pros, the time trial, was in the second to last day of the race, but Chris opted to relocate this day at an earlier date.

Fatigue was accumulating, but he was as motivated as ever after seeing how people were still collaborating with their donations. By the second rest day, the donations were over £3000.

He kept everyone up to date on social media, and one could feel sorry for him when he was explaining all the hurdles he had to overcome each day. Sitting at home and watching the Tour, his followers couldn’t help him with his mechanical problems or pushing up the hill, but there was a constant flow of support messages that kept Chris going.

Luckily, the wind doesn’t always blow against our direction, and Chris could save some energy the day he stepped into Scotland thanks to a very welcomed tailwind.

The 1.000 mile barrier was overcome on the 10th day of riding, which also was one of the toughest days of the challenge. It was admirable to see how, even after the rides in which he suffered the most because of the wind and the storms, he continued highlighting that he was doing it for a reason, and that while the kids at the Pace Centre do not have a choice, he had chosen to do that.

He arrived at the most northern point of the United Kingdom the 12th day, a quick touch and go before heading in the opposite direction, riding through some of the same roads he had passed by on previous days. Gradually, he would head east and arrive at Lowestoft Ness on the second to last day. While Tadej Pogacar and the rest of the finishers of the tour were enjoying the parade around the empty Champs Elysees, Chris finished his journey dealing with the busy traffic of London. Opposite endings, but the same sense of accomplishment. 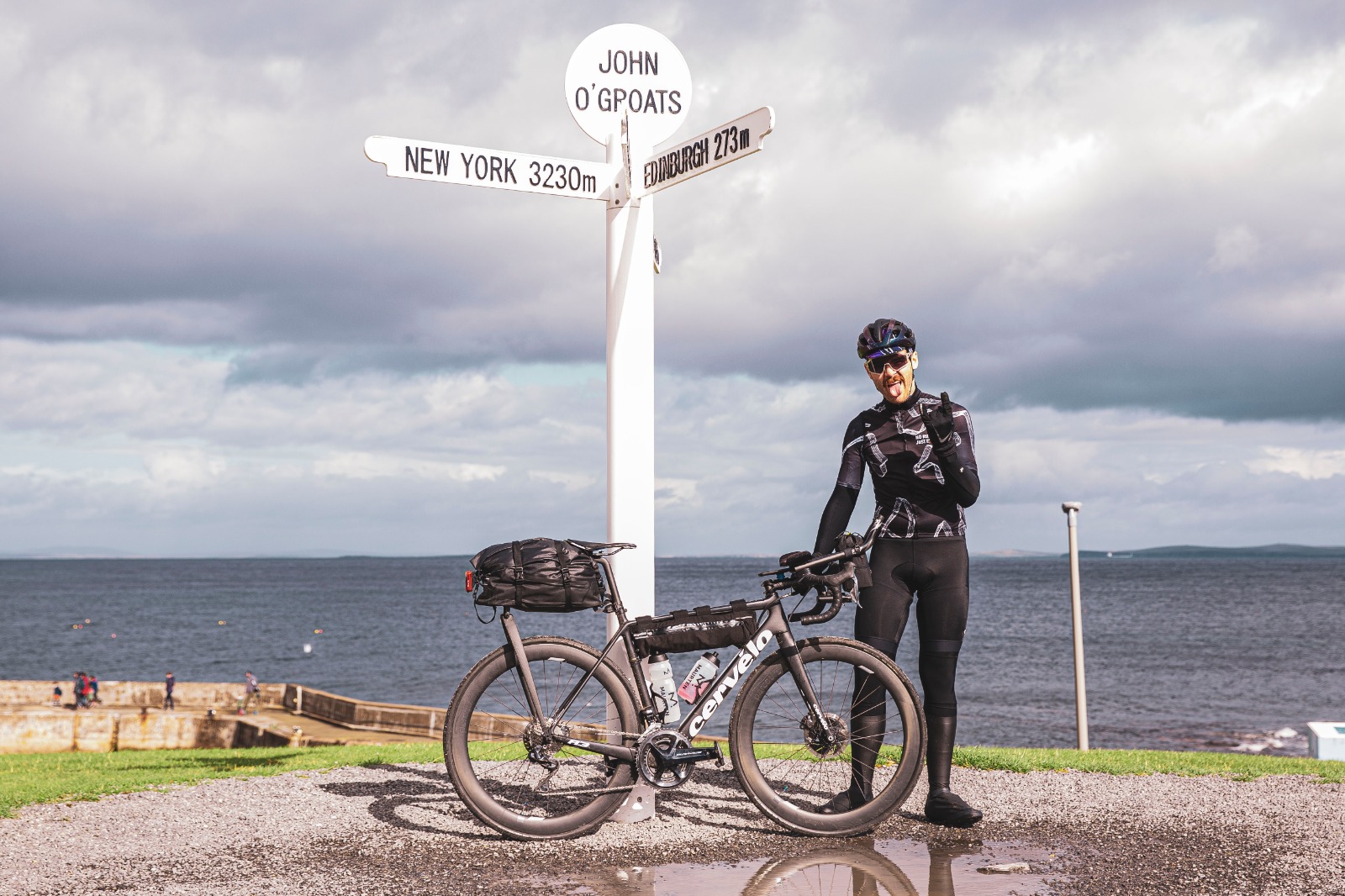 The presence of the number 107

As mentioned earlier, this was not the first time that the Pace Centre and the number 107 were involved in the different challenges Chris has completed to raise awareness for a certain topic. Back in December 2016, Chris rode 107 kilometers per day for 107 consecutive days. By April 1st, 2017, he had cycled 11.449 km through the British winter, with many hours in the dark and under the rain. There was no choice, as he also had to continue working full-time. Three and a half months of forcing yourself to ride more than 3 hours pay its toll, but by accomplishing the goal he managed to raise awareness for his cause. In comparison with his latest challenge, this 107 for 107 covered much more distance, but the majority of the riding was in London, so he could feel a sense of security or protection that was nonexistent when riding roads far from home.

Last year, when traveling was possible without restrictions, he completed a ride across Australia together with his friend and youtuber Francis Cade. From Perth to Melbourne across the Nullarbor Plain, they encountered the typical Australian fauna and had to face the headwind in some of the longest straight roads on Earth.
That was the most comparable thing he did before 107TDF, as the number of days and the accumulated distance is quite similar. Nonetheless, the endless flat roads and the heat that identify the biggest country of the smallest continent are difficult to find anywhere else in the world.

Other of his achievements include riding from London to Paris in less than 24 hours and finishing several ultradistance competitions. He has also taken part in some off-road events like the Atlas Mountain Race or the Silk Road Mountain Race, so you will probably see him in the start list of any upcoming event of that type.

To donate to Pace Centre, click on the following link.

This year the road team Qhubeka NextHash launched the campaign…

It is not the first time we are mentioning the…