Some days ago, Shimano released the film All bodies on bikes in which Marley Blonsky and Kailey Kornhauser go on a bikepacking trip across Oregon (USA). Typically when we think of cyclists what comes to mind is the Tour de France and a bunch of skinny guys pedaling through the crowds. However, in this movie, we can see that cycling is much more than that and not limited to a body type.

We had the chance to talk with Marley Blonsky, who over the years has been enjoying cycling more and more, from casual commuting to adventure cycling through the USA. We discussed a bit about her way of envisioning bikes and the role of her and Kailey Kornhauser’s project, which intends to give visibility and provide solutions for fat people who are into riding bikes because you should embrace your body and just enjoy what you do. 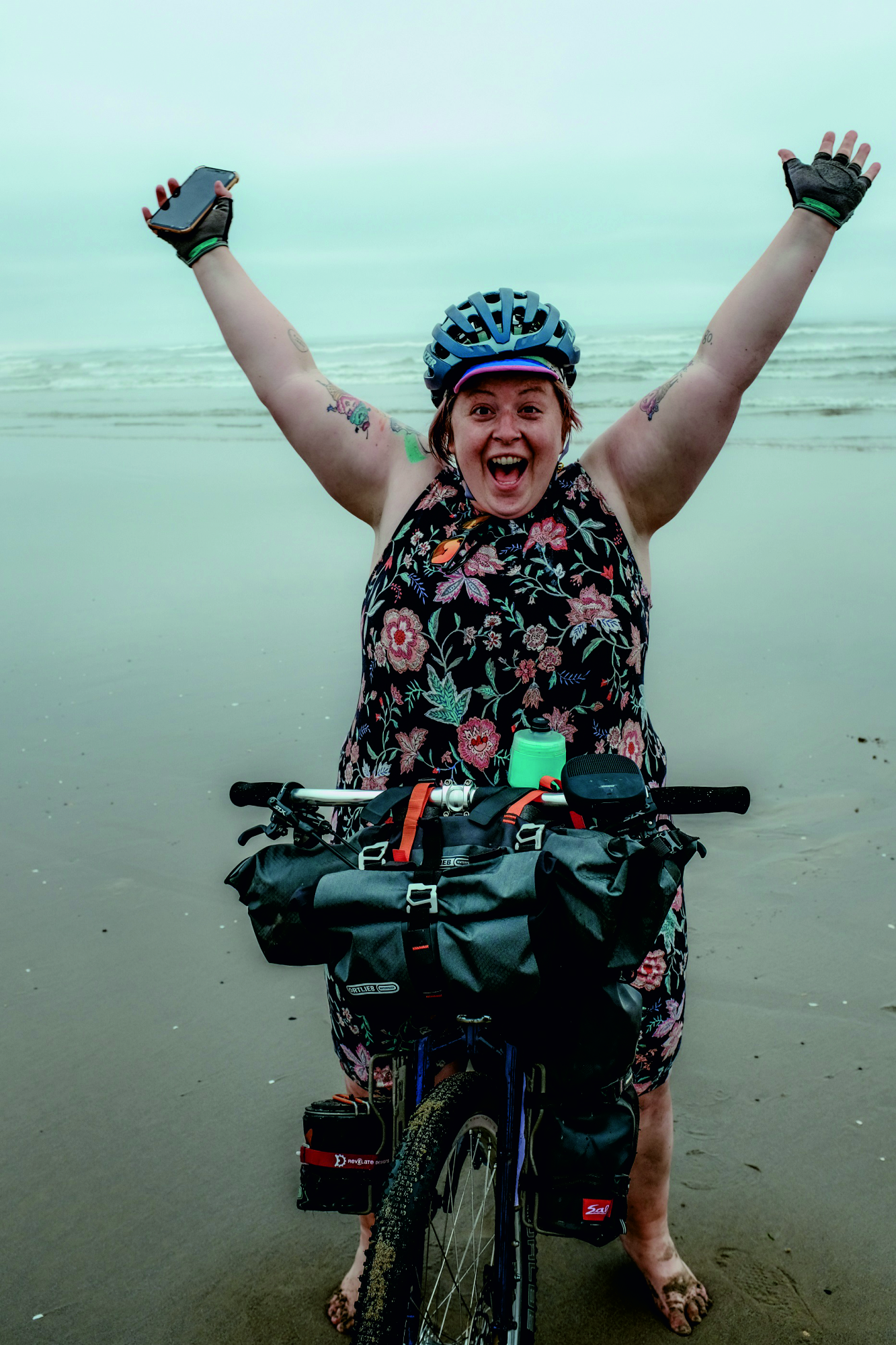 Could you give a little description of yourself for those who don’t know you?

I am Marley Blonsky, I identify as a fat woman and I like riding bikes. I’ve been riding bikes for basically all my life. I didn’t think it was a big deal to be a fat person riding bikes. I did it for fun and transportation. I was commuting to and from work on my bike and then I started doing what it is called adventure cycling (bikecamping and bikepacking). Then, people started reaching out to me and asking how I did it as a fat person, what clothes I wore, or what material I was using. I realized this was kind of unique, that I had the knowledge to share, and the possibility to do better for other people. This is when I started writing on a blog and sharing my knowledge not only about bike camping and commuting but also what it is like to be a fat person on a bike.

As a fat person, did you find any obstacles?

For example, there weren’t clothes. Often making do with clothes that I could find. It was hard to find things that are large enough, and I am not even that big (small to mid-fat)! There were lots of messages to big companies to ask if they could make it on bigger size. And I would often get a message saying ‘we are working on it, we want to do it but we don’t think the demand is there’. That probably happened 50+ times. Finally, there was a company that was down and proposed to send some things to try and give them feedback. That was two years ago, and the first time I put on a pair of bibs that fit, was amazing. Just to have functional technical clothing. I had made fun of roadies and people who wear lycra because I felt left out. Once I wore the whole outfit, I finally got it, it made sense. There is still not a lot but I just got my cycling-specific rain jacket from Pearl Izumi, for whom I am an ambassador, and it is great.

How did the All bodies on bikes project start?

Kailey and I had been doing workshops and classes on how to make your bike club or organization more inclusive and more fat-friendly. We had done that in a couple of conferences and then Cvid-19 hit so we moved to do it virtually. She went to school with the filmmaker, and he saw one of the presentations and thought it could make a very compelling story and film. He then reached out to Shimano for some funding and they agreed. Kailey and I didn’t have the intention to make a film out of it, but we are so grateful the message got out that way because I think it really helped accelerate it. Otherwise, we would still be giving conferences to 10 people in a room.

What is the role of such a big company as Shimano?

They have been wonderful and 100% supportive in so many ways. We have been treated as equals, as athletes. It has been a great experience and I haven’t been tokenized. It hasn’t been deliberate, but they now have two fat women as ambassadors who can reach other people and a wider audience, in the end, a consequence of the project. I feel their teams have learned a lot as well on how to do better.

Now that the video is out, have you been getting more attention?

Yes, definitely. We have been embraced by all kinds of people, even those who race bikes and focus on fitness. They have seen that Kailey and I are having fun and they identify with that. We haven’t gotten much negativity but the opposite. Through Shimano, we have gotten in touch with Giant bikes and a couple of other companies. I know change takes time, like for clothing. Brands are designing clothes two seasons ahead. I just want them to realize how many fat people want to ride bikes and wear functional clothing.

Aside from workshops and classes, what will be the next step?

As people get vaccinated we will start going on short meet-up rides for beginners and then longer bikepacking trips for mixed groups too. It would be really cool to see more and more people on larger bodies, and then to have mixed groups. We haven’t ironed out how that will look like since Kailey lives in Oregon -I live in Washington-, it’s hard to arrange. However, we will keep doing classes and we are open to doing whatever companies or other organizations might propose. It would also be cool to do overseas trips or retreats. 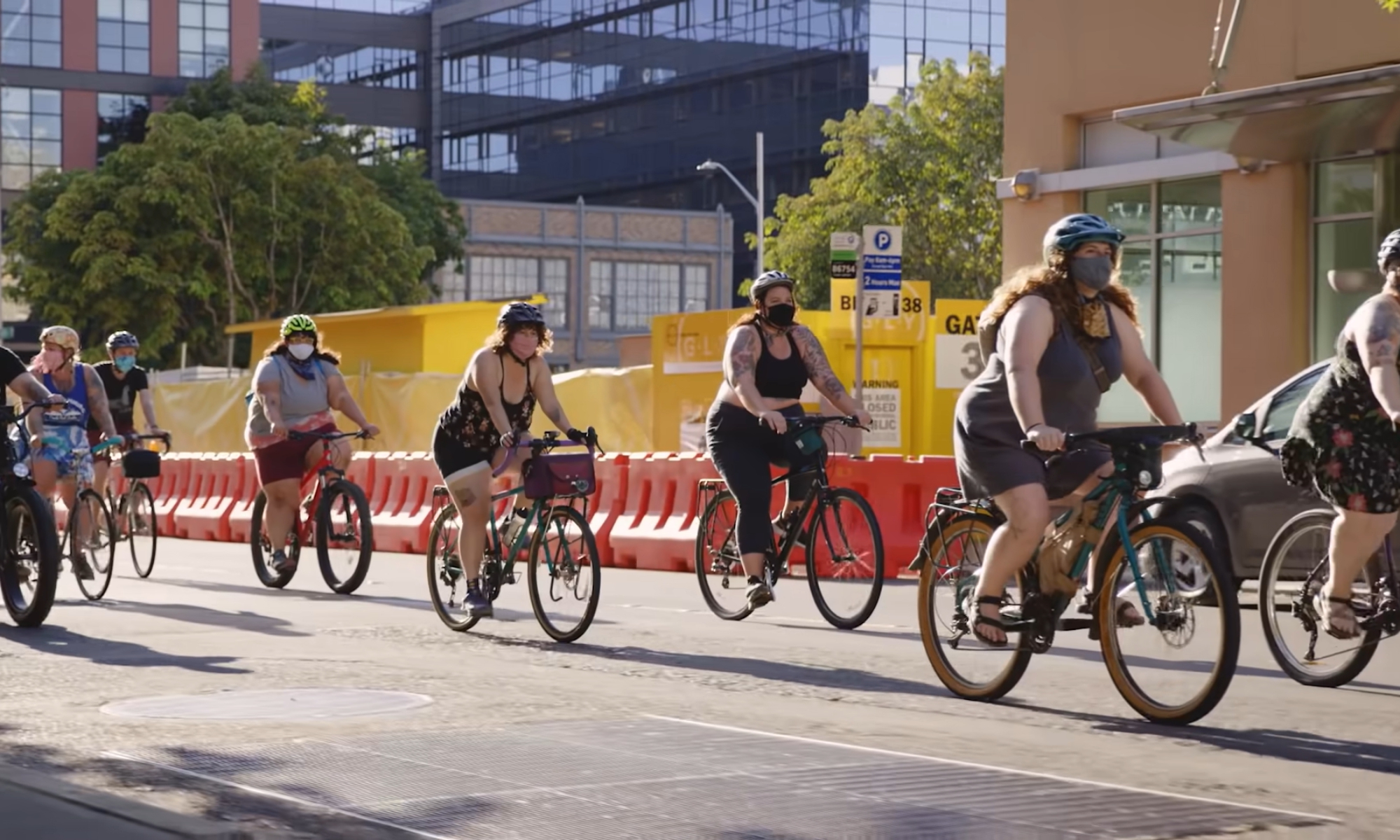 Are you planning on going international and reaching everyone on the planet?

We have a call scheduled with Shimano-Europe, at least with the marketing and the sales teams. A big part of this is training bikeshop employees and sales reps to teach how to have conversations and to treat everybody equally. For example, on how to be more inclusive when you are leading a group ride. The FB page and IG account have helped a lot in spreading the word. We are also doing Zwift rides every Friday, but we have to add everyone individually, so it takes a lot of time, not ideal. We are trying to become official and have meet-ups to create a community across the world. Once travel opens back, we would like to be able to say ‘Kailey and I will be in Paris, let’s meet up and go for a bike ride’. With bikeshare everywhere, it makes it so much easier. That’s the plan, but it’s all kinda in a pause right now.

I was surprised to see that not only you are two fat people, but also two women on bikes. At the end of the video, there is a group of people riding bikes, mostly women. What do you think about the role of gender in the project?

Well in the video is just my friends who I could reach out to for the video. However, it seems to eschew towards women but there are a lot of men who identify this way as well. I don’t know if it is because Kailey and I are both women, our voices tend to resonate and reach women more easily. I know there are fat men who ride bikes too. I don’t know if they are more hesitant to identify themself that way. In any case, there are definitely more women that are looking for community, but it is open to everyone. 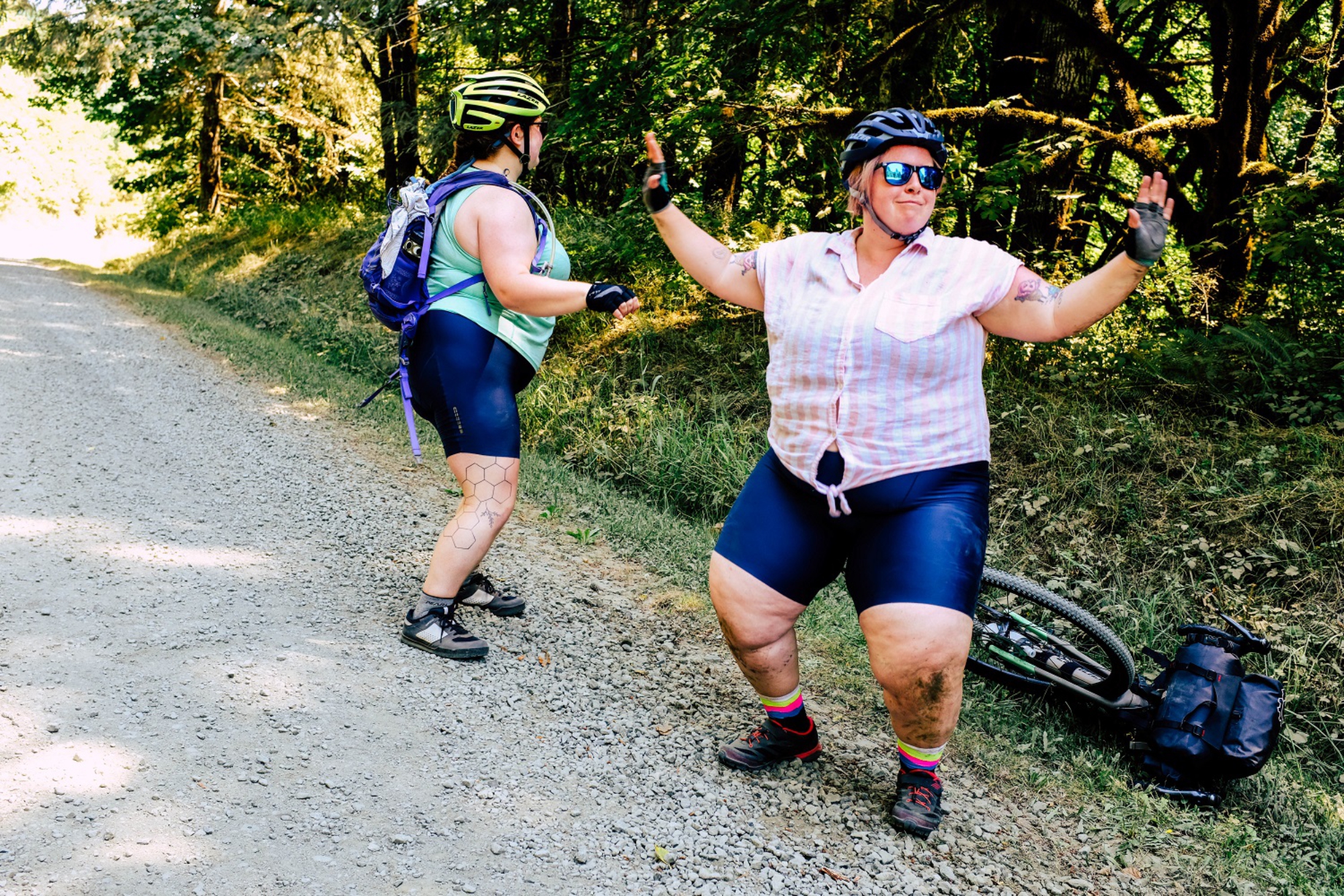 Kailey and I are going on a bikepacking trip next week, but this time I am picking the route. It didn’t come across in the film, but Kailey picked up the route, and it was so hard. This time there will be less climbing and more fun and more dancing. We are going on a 2-day trip on the Deschutes river trail. Hopefully, in May we are planning a 5-day trip across Oregon as well. This time, there will be a camera crew too.

We are all built differently. I could starve myself and ride bikes and get skinny, but that sounds miserable. I’d much rather eat healthily or not -I sometimes like ice cream-, and still ride my bike. I think that joy and happiness that resonates within people by riding bikes. They just get it. If people find happiness with fitness and being the fastest, that’s great. However you want to ride your bike, go for it. I am not here to judge you. I like going fast downhill too, I love it.

Also, some of the best experiences I’ve ever had on a bike is when I slow down to talk to other people. Stopping to help someone with a flat tire or giving somebody directions. I think people who have been riding for a long time can get ‘too cool’ as they just know what they are doing and feel they are the best. It can be really humbling to remember we all started out as beginners, and if somebody needs help, just stop. You never know what you might learn.

One of the beauties of cycling is the freedom it…

In the last years, we have seen an increasing trend…