In all these years at the front of the magazine we have had the luck (or the misfortune) to see ourselves involved in a lot of projects, many of them really exciting and rewarding but, like everything in this life, there is always something to which you have a special affection for all the effort and time you have dedicated and all the good moments you have contributed. In our case, without a doubt, the project that best represents this feeling is Among the Giants.

Something that was initially born as a simple trip of friends, was taking shape and becoming big as if it were a snowball. We reflected a lot about the format, but finally, after several weeks of work, we got a clear idea of what we wanted to build with ATG. 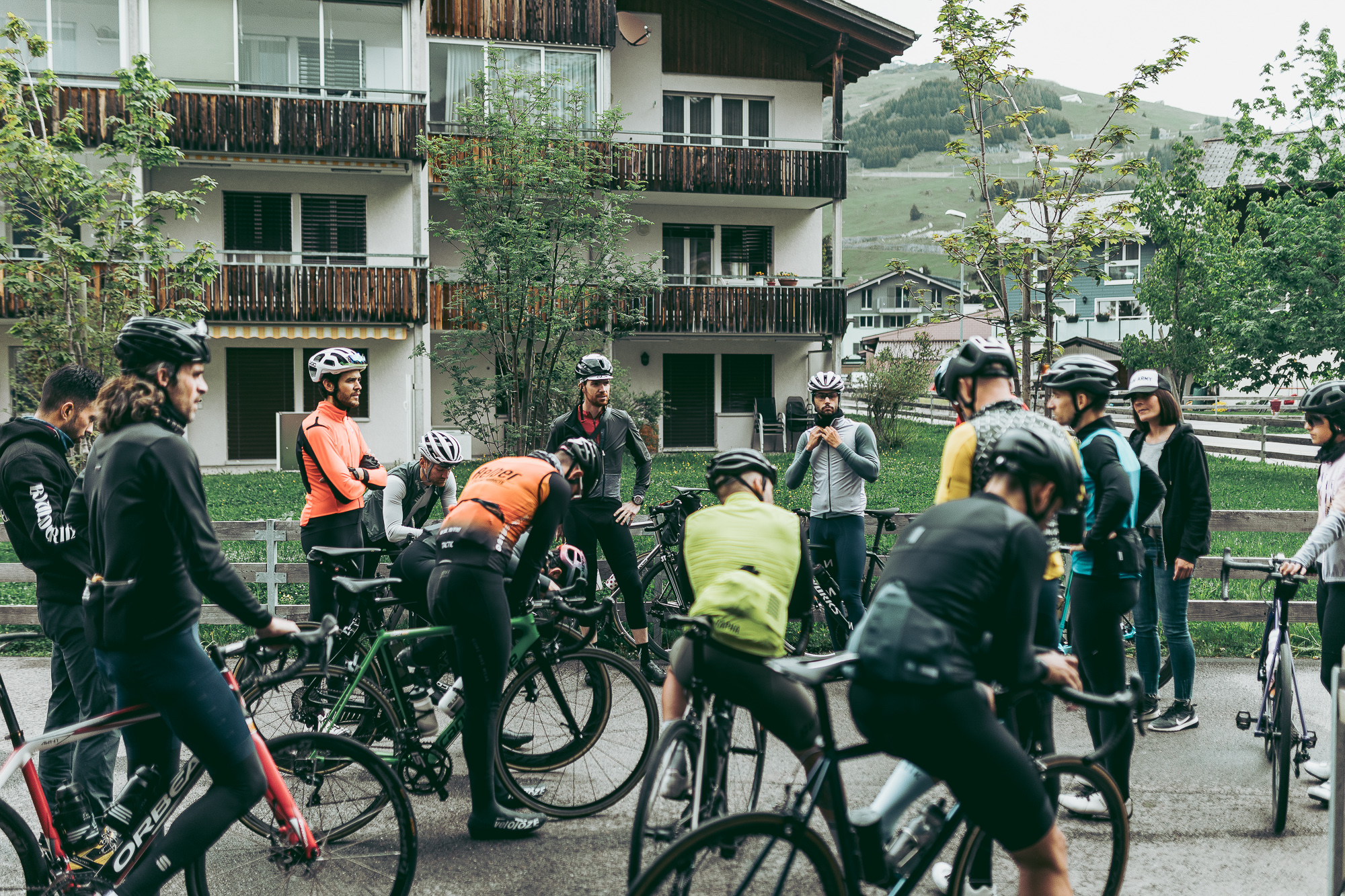 Now, after four years since that first trip to the Dolomites, we are at a point where, although we continue to suffer every time we organize a new edition, we have a stable and experienced organization that allows us to enjoy and live an increasingly rewarding experience for everyone.

The journey to the heart of the Swiss Alps presented certain challenges from the very first moment we chose Switzerland as our destination for the third edition of ATG.

The first handicap we faced was to find a place to stay that would allow us to establish a base camp from where to start each day of the route and avoid additional transfers. After shuffling several locations, we chose the picturesque village of Andermatt, surrounded by high mountains and with a perfect location to settle. We rented a big house that would be for three days the home for all the members of ATG3 and all the staff of the organization. To strengthen the group spirit, our most cherished value of the project, we decided to include a chef, which would unite us all on a large table before and after each ride.

The second aspect that worried us was the climatology of the month of June. Although temperatures are beginning to moderate, the routes covered changing altitudes, with great thermal amplitude and, as usually happens in high mountains, and unpredictable weather, as it usually happens in high mountains. The Switzerland Tourism Office warned us of the possibility of finding traffic restrictions and some mountain passes closed due to the risk of avalanches. We became experts in Swiss climatology websites, as well as Komoot‘s planner, trying to trace alternatives to the more than possible closed passes.

Despite the obstacles, we would risk it and go ahead with the plan.

Every year we receive many requests to attend a new edition of ATG and we regret having to reject many of them. One of the particularities of the project is that it is an invitation-only trip and only who receives one of the invitations can attend. On this occasion, we had riders from the Netherlands, Switzerland, United Kingdom, Spain… a heterogeneous mixture but that fit perfectly. Adventurers, designers, brand owners, Youtubers, ambassadors, …

People who bring new things, who transmit illusion and desire. We never get tired of saying that it is clearly what we are know how to do the best in this project; to unite strangers who quickly feel among friends from the first moment. 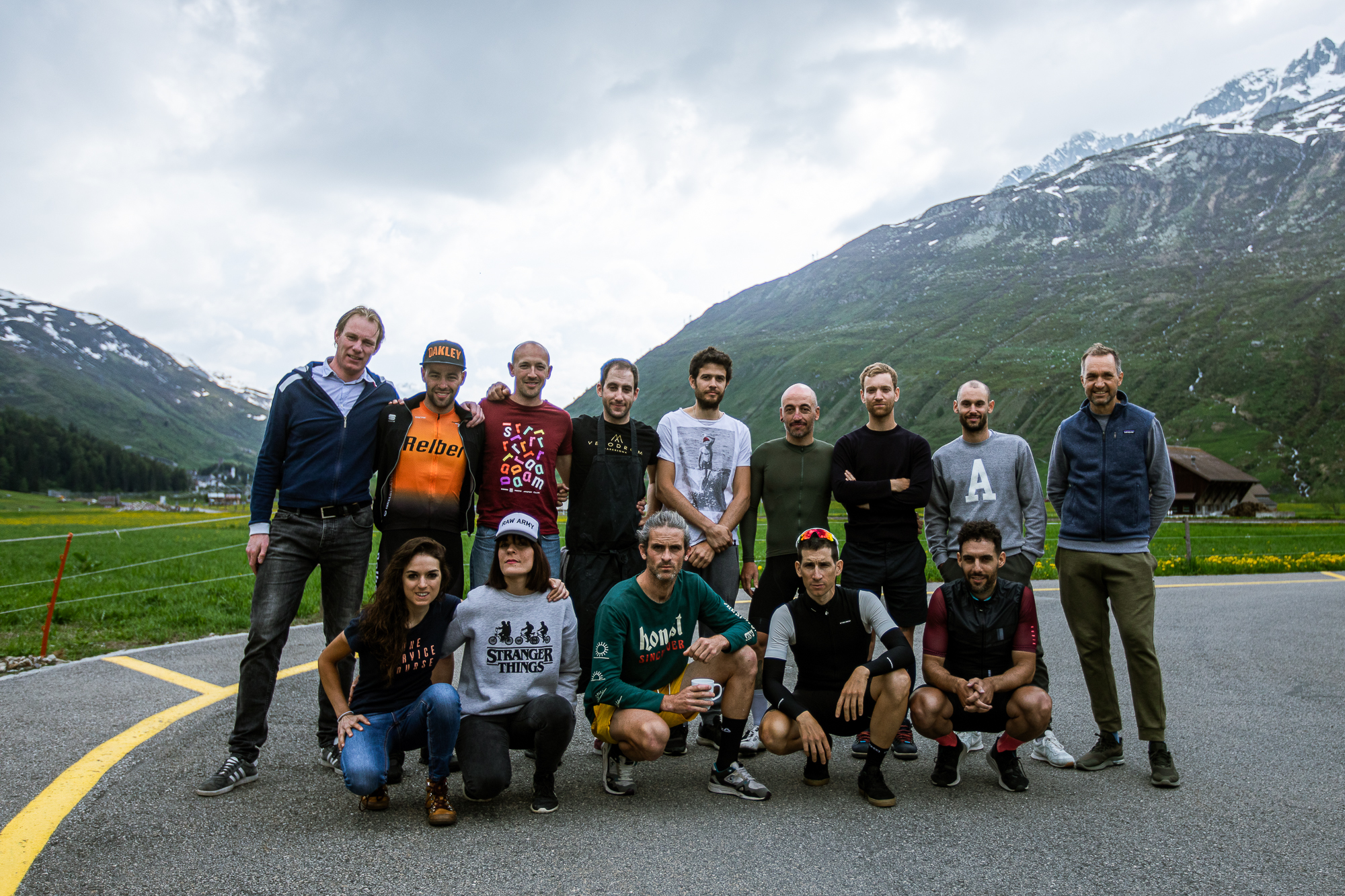 The Swiss country is, without a doubt, one of Europe’s favorite destinations for its mountains, nature, and hospitality… and we have seen it first hand.

From day one we were able to put ourselves to the test with its climate and its large climbs. We have traveled kilometers and kilometers of roads through incredible valleys. Let us tell you a little more about how our day-to-day was between meadows and blocks of snow, cold, heat and rain. ATG in its pure state.

The meeting point for most of the guests was Zurich Airport, from where the shuttles would depart for Andermatt. We would like to take this opportunity to thank Switzerland Tourism very much for the help we received with the logistics for the transfers

When we arrived at the base camp we were surprised by how quiet and beautiful the village was, what a great choice it had been and, what to say about the house, the reality far exceeded expectations.

We quickly started to unpack and assemble all the bicycles. It was time for mechanical aids and the first laughs. Some people could not hold themselves and, after putting on the lycra (and some jacket that was needed), they ventured to know the terrain climbing Oberalp, which starts on the outskirts of Andermatt.

Mario, the chef, after setting up his bicycle (of course, he also rode), began to prepare the dinner while some stragglers that made the trip by road from Barcelona arrived. 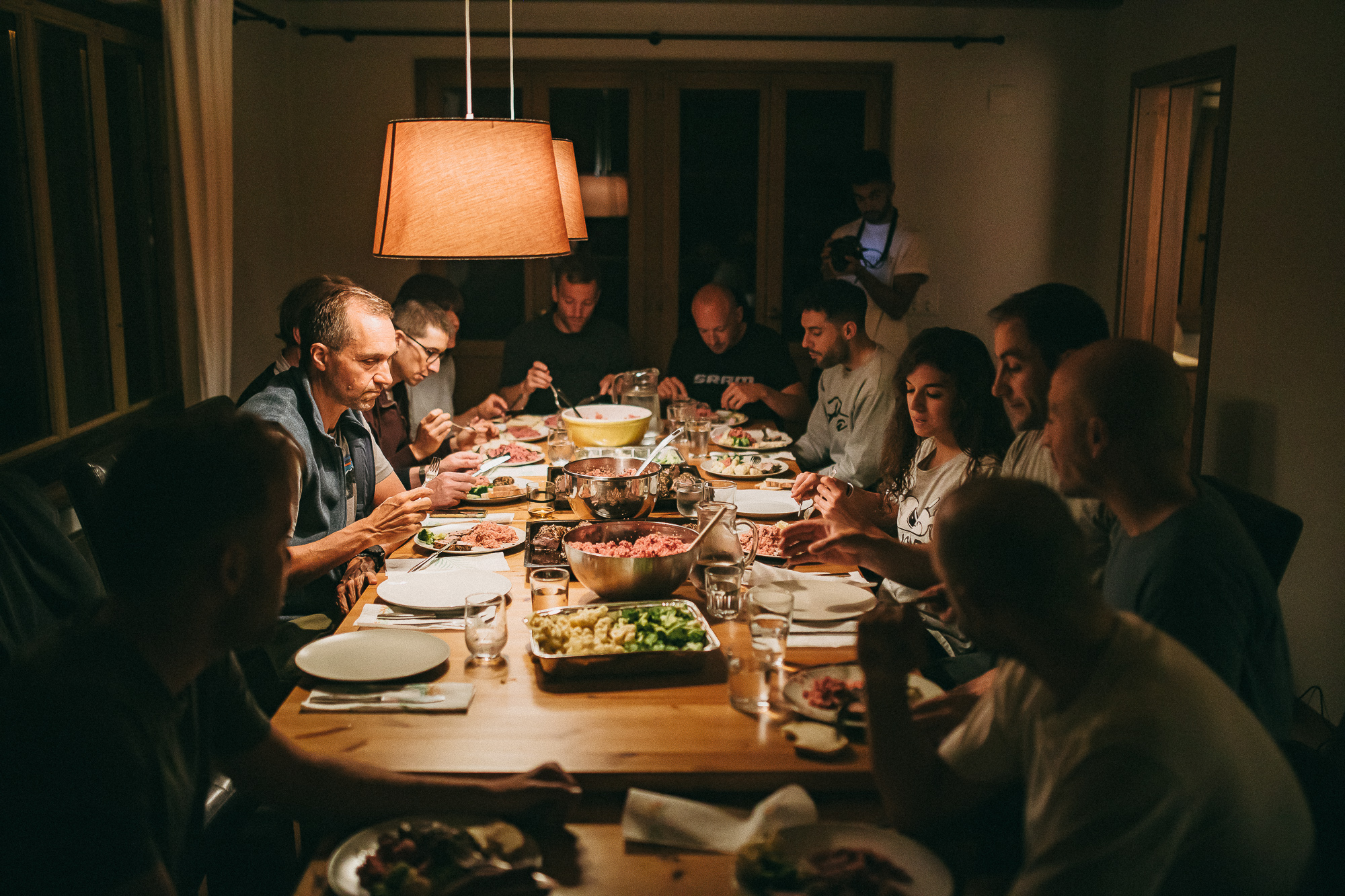 Finally, we gathered around the main table, relaxed, we told everybody else who we are, what we do, and why we were there…. It’s an ATG tradition that helps to put everyone on the map and break the ice as a group. We took this moment to deliver welcome bags with some gifts of the brands involved in this edition.

Before going to bed, we did daily sync with Adriano from @CyclingSwitzerland (a passionate cyclist and a great connoisseur of Swiss ports) to review the next day’s route, weather forecast, and traffic restrictions. Certainly a great help.

With eyes still half-open, we all met for breakfast. We took a look out the window and didn’t like what we saw, a typical alpine rainy and gray summer day.

Mario prepared rice cakes with spicy mango (spectacular) as an energy bar, that would help us ride during the 150 km we planned, raining or not.

After carefully descending we approached Lukmanier Pass/Lucomagno, another 20 km at 5.2% with its highest point at 1.950 m. Another descent, this time of 40 km, almost zero degrees and rain twisted our faces, but the views made us happy… after a stop to eat something and fill the bidons we see that St. Gottardo is closed to road traffic, a snowfall leaves us without the main climb of the day, in retrospect, with how soaked we were and how cold it was… changing the mythical ascent for the train from Airolo to return home was not a bad idea.

When we got home, Ronald and Vincent, who decided to shorten the route as a precaution for the rain, had prepared Dutch-style pancakes with melted cheese and icing sugar. What a good reception.

Tired faces, laughs, and anecdotes during dinner, we already felt like home, goal accomplished. Now it’s time to review alternatives to tomorrow’s route, the cold has delayed the thaw and the scheduled opening dates of mountain passes, we continue.

We began the day somewhat tired but very animated, the time seems that today would give us truce and would respect us.

The first course of the day: Furka Pass from Realp. However we can only ascend 7.5 km, the road is cut by the high risk of avalanches and we weren’t able to see the mythical Hotel Belvedere’s hairpin. Is it a good excuse to return? 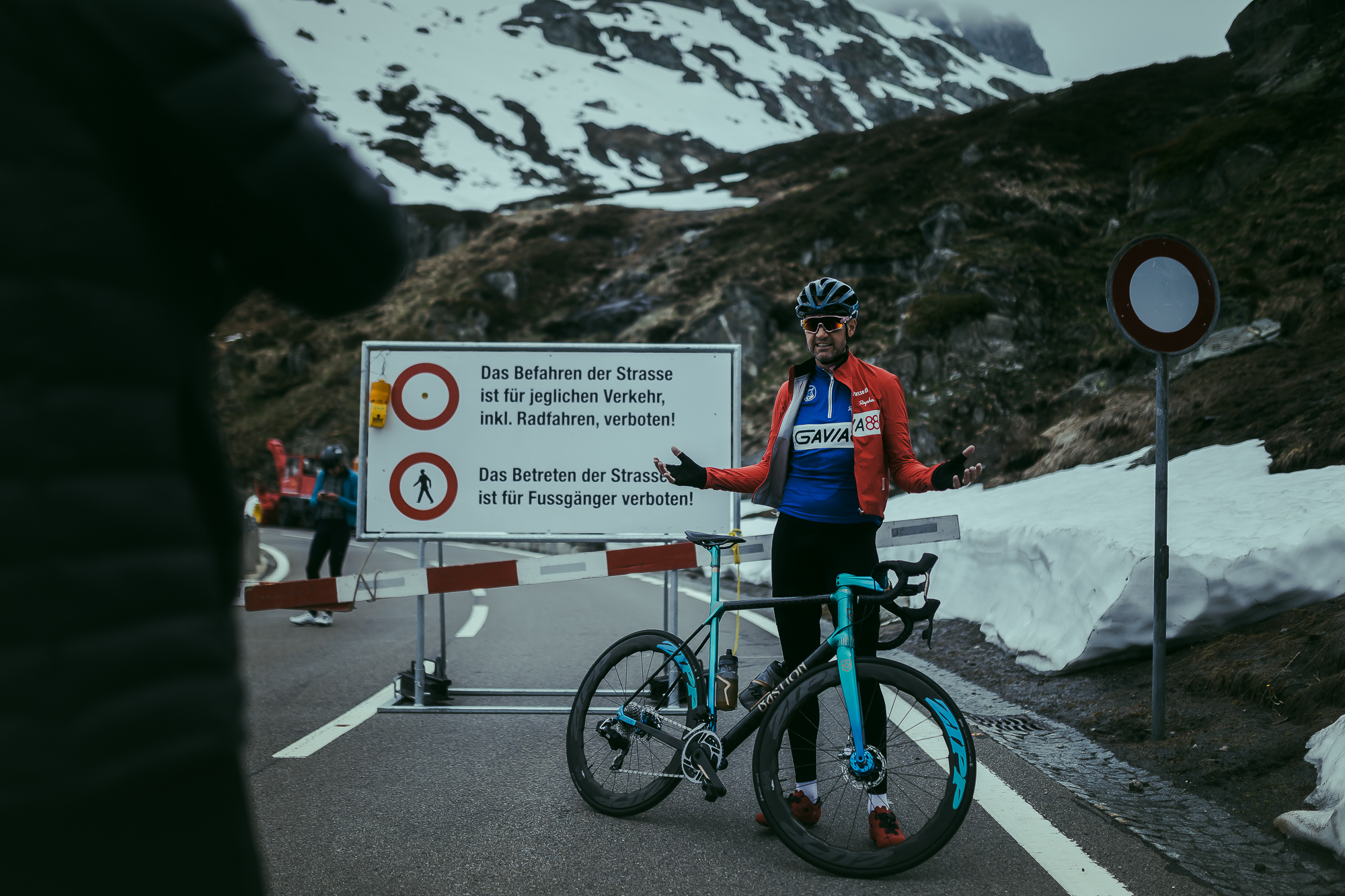 We descend the valley until Altdorf, we have changed from 2 degrees in Furka, to 30 in the valley, after a few sprints among the most competitive, we have to remove layers of clothing before the colossus of the day, we are to the feet of the Klausenpass, 24.6 km at 6.1% with an altitude of almost 2.000 m, the strong wind, and the 33º, make that the long slopes at 10% were a real deal, nevertheless, the landscape is worth it, enormous and steep grassy fields full of cows leave us an idyllic picture difficult to forget.

Gradually we begin to descend, some looking for the KOM and others enjoying the landscape, everything is compatible! Some rational people decide to return to Andermatt by train, others don’t have enough and do the 34 km of the way back adding another thousand meters of climbing as a dessert.

During dinner you hear more laughter than ever, you notice the complicity that comes from suffering together, this goes well.

St Gotthard is open! We had breakfast with the good news, and you could feel the optimism.

After the daily check of all the bicycles we go to Saint Gotthard from Hospental, 8.6 km at 7.1%, with elevation up to 2.108 m, the ascent is unreal, a landscape almost lunar, snowy and very foggy. The sound of the ice of the waterfalls melting the melt mixes up with our exhalations, the accumulated tiredness is noticed, but the prize of the summit pushes us, snow, much snow, too much snow in June! From where we were we could see the next climb, the Tremola Pass, one of the oldest and most famous climbs, let’s go there.

After approaching at almost 90 km/h (some), we regroup in Airolo to have a hot chocolate before climbing what, for many, is the most beautiful climb we have ever climbed. Endless cobblestone hairpins, with walls of snow shrank by the early summer sunlight. Only the last few pushed along the valley among riders were left,  with the rack train in parallel, towards the base camp. There were mixed feelings at that moment because that was over. 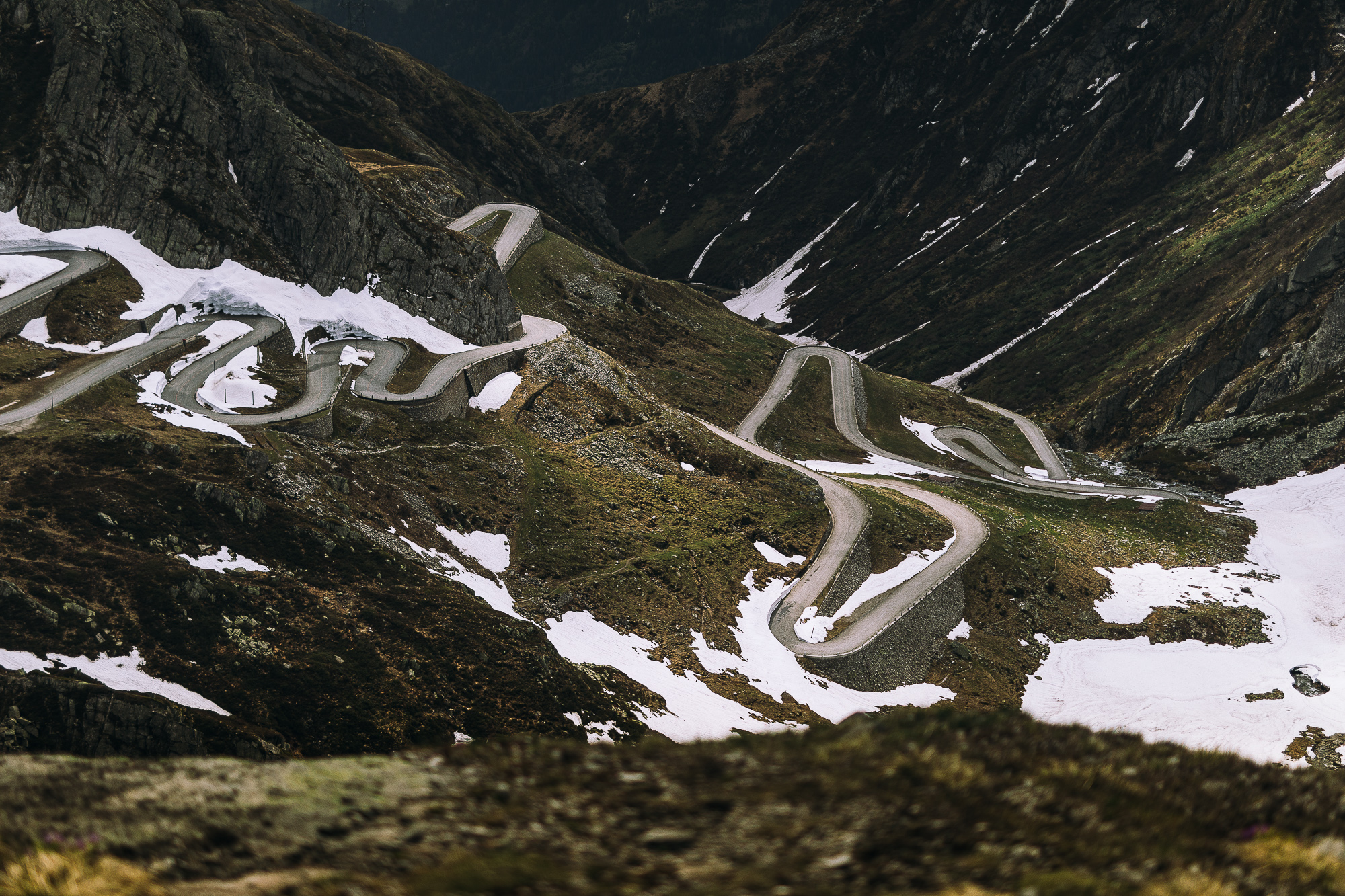 After a short walk through Andermatt, we gathered again for dinner. It was time to compile some of the moments we lived, a time to gather feelings, comment on the experience, acknowledge the effort and show some emotions. We were especially grateful by the gratitude of Ronald, an adventurer who has participated in many cycling experiences around the world and highlighted how comfortable he felt in ATG3 (thank you, Ronald).

As it is already a tradition, those that the return home allowed it, enjoyed an extra ride. A short route along the valley that would lead us towards the Göscheneralpsee Staudamm lake, only 36 km from home but with 1.400m of vertical gain. A short but intense ride, a perfect souvenir to remember, even more so, the experience of those days in Switzerland.

The overview of ATG3 could not be better. As we commented, the work and planning was very demanding but the return was exceptional. The satisfaction of the participants, the support of the brands and the increasing impact of this adventure is pushing us to think since NOW in the next edition.

With the Tour de France having just finished and the…