The Impossible Route documentary series started when former US mountain bike champion Jeremiah Bishop invited his friend The Vegan Cyclist to conquer the Mauna Kea in Hawaii, the second-highest peak of an island on Earth. That video was an instant hit, so for 2021, their goal is to take on four nearly unimaginable expeditions, with the purpose of setting out to redefine what is possible in the world of gravel cycling and inspire others.

As a cyclist and content creator, The Vegan Cyclist is continuously brainstorming new ways to keep his love for the bike alive while maintaining his audience engaged. In his latest long film The Impossible Route: Death Valley, Tyler has put his editing experience into practice to provide his followers with an inspiring video about what he and Jeremiah Bishop have recently accomplished during the latest installment of the project. 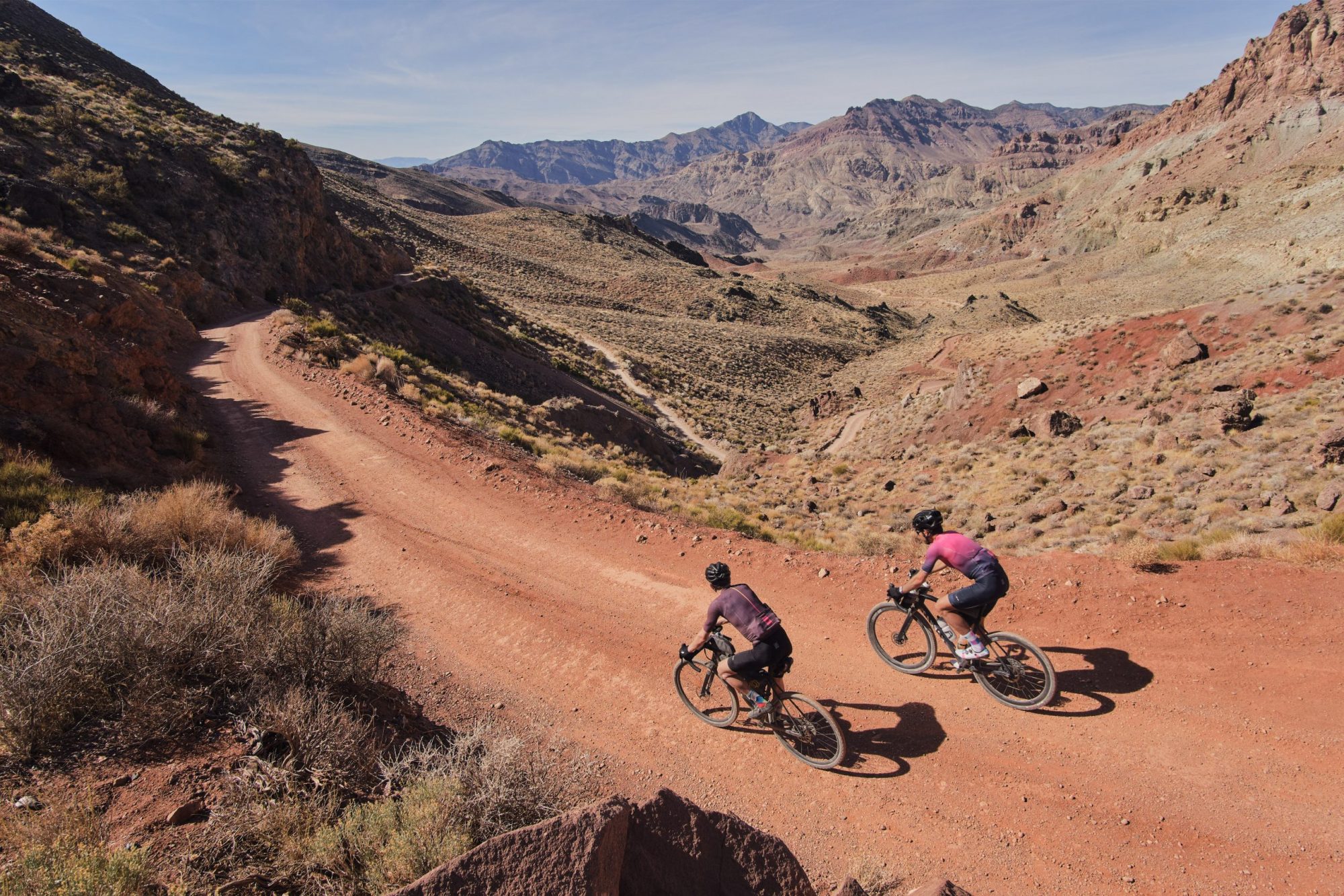 The need to satisfy all stakeholders

In addition to the physical requirements of riding 58 hours in seven days through such rough terrain as in the California Backcountry Discovery Route, the riders had other stressing factors. With several sponsors funding the project, including Canyon, IRC Tires, Whoop, Flow Formulas, Eliel and Apidura, and there was a long list of deliverables to satisfy. That meant that not only did the riders have massive on-bike demands to get to the desired location each day, but they had to take make sure they posted the required photos and storytelling shots too.

Even when there is a lot of money involved, both the sponsors and the riders themselves want to make the film look as organic as possible, but there is always a tradeoff between the freedom for execution and the amount of resources one receives to film it.

Most of us go on an adventure without the intention of creating a high-scale production afterward, getting back home with the only memory of a few photos on our phones, and yet that is enough for us to be proud of what we achieved. The Vegan Cyclist is also stoked when he overcomes difficult circumstances, but in addition to that, he has to let his viewers know what he has done too, for better or worse. There was a constant level of stress, worrying about missing an important shot, and paying continuous attention to battery levels.

Tyler is used to posting videos with his GoPro, and during The Impossible Route he was carrying it and filming some takes with it too. Nonetheless, the risk of spoiling the final video made him change his mind about posting much during the week, as giving people too many hints about what happened during that adventure would negatively impact the excitement for the recently launched film.

Jeremiah Bishop and The Vegan Cyclist were not there on their own, as they counted on a film crew packed with expensive gear, and additional help for mechanical and nutritional demands. The stage race style of this effort meant they would go from camp to camp with no support during the ride from the crew. Ramy Khalaf was the lead videographer and Jake Orness the lead photographer, with Dale Travers in charge of social media duties and hotshot driving, Travis Longfellow as mechanic and driver, and last but not least Biju Thomas, who was the chef and director of logistics.

The planning of The Impossible Route: Death Valley started in August, with the title sponsor Canyon coming on board just in time. They went through all the available maps of the area trying to figure out a plan A and also some possible alternatives given the circumstances they may face. They decided to ride the California Backcountry Discovery Route with a few tweaks since several highways are illegal on bicycles.

In parallel to the conceptualization of the adventure they had to seek funding, and although it was not Tyler’s first time trying to bring sponsors on board for a personal project, a good pitch was necessary. And how did they describe one adventure like this to potential promoters? “The first time we pitched Mauna Kea it was like ok whatever, but having the first video really helped explain the mission, a world’s first and a real challenge” – says Jeremiah. The film they published a year ago was recorded on a low budget, but the promising result showed the potential of a project like this with additional resources.

Behind this great production, there are endless hours of editing. When thinking about merging all the content recorded by two different drones, two supporting cameras, two GoPro, and one Blackmagic Ursa camera, one could lose their minds trying to fit everything together.

“With around two terabytes of footage and thousands of images, it can be overwhelming to tell the story. Even if we do a great job, it will be tough to convey how magical the light and mountains were out there” – Jeremiah

“Without them capturing every moment, this would just be one of those big fish in a small pond type stories your grandfather would tell.” – Tyler

Particularities of such a high-scale project

They started their adventure on March 1st in Yuma, Arizona. The daily “routine” during that week for Tyler, Jeremiah, and the crew involved a lot of logistical tasks. They used Iridium satellite phones and a Garmin inReach for communication purposes. Having to move the RV where they were staying to the next camp, filming while driving the 4×4, and moving bikes and gear in the Sprinter van was also a big headache. If the riders would have not been able to reach the planned finish spot, the whole plan would go wrong, so there were a lot of things to take into account.

For the filming crew, a big part of the work was done ahead of time, as they determined in advance what their shots would look like. “With the help of mapping software and image searches, we created a list of all the points we could use to place the riders in the foreground of stunning landscapes and popular landmarks. Along with that came the challenge of assessing which type of shots would work best for the scenes and subsequently ensuring that the right cameras, mics, and lighting were ready when needed” – says Ramy. This way of planning allowed them to be prepared for the one opportunity to take the desired shots, being at the right place at the right time.

“We all meshed really well, and even when we screwed up we all were able to let it go and find that next shot” – Jake

“It was profound to witness everything from horses in the wild to vast, desolate deserts where you could hear a penny drop. The riders were nothing short of heroes and being able to document their journey was truly a privilege!” – Ramy

Regarding nutrition, Jeremiah acknowledged how important having good food was to Tyler, so he reached out to Biju Thomas, author of The Feed Zone Cookbook, who gladly joined the project. According to him, Biju made a remarkable difference in both their recovery and food intake choices.

Once they started riding, they had to get to their daily destination in a self-supported way, carrying all the necessary food, water, and tools. With cycling brands providing them with products they had hardly ever tried before, it wasn’t easy to get used to them. How to attach the Apidura Expedition bags or where to put all the Lezyne lights Jeremiah purchased at the last minute was something they had to invest time in. They installed some new tires the night before the start, but luckily they just had one flat.

Time to enjoy the end result

With so many shots to make in order to satisfy the parties that had invested money in the project, one can say that the ride far from smooth, having to stop every few kilometers to capture the moment. Nonetheless, taking a look at the stills from those days, it seems it was totally worth it!

Seven days later, they arrived at the finish line they had planned. In between, the film crew produced dozens of hours of footage, enough to keep them busy editing for the next few weeks.

Coming up next, The Impossible Route will bring The Vegan Cyclist and Jeremiah Bishop to Trans-Appalachian on a mission to traverse lost roads in a fully self-supported way. The two other epic routes will involve a nonstop ride and they will feature the Teton Range of Wyoming and the Cascade Volcanic Arc.

Until then, sit back and enjoy The Impossible Route: Death Valley film, now that you know what’s behind a project of such dimensions.

At Restrap they don’t just make bikepacking bags and cycling…