Bohemian Border Bash has previously featured four editions and has since established itself as an international gravel camp event on the calendar to look forward to. We’ve had the opportunity to attend the event multiple times while taking place in the famously unique region of Bohemian & Saxon Switzerland, spanning across the Czech – German border.

However, big changes are coming up next year. In 2023, the Border Bash will celebrate its fifth birthday by ignoring borders in a new location: Aragón, Spain. Gravel enthusiasts will now have the opportunity to enjoy the Border Bash camp twice a year, with its spring edition in the sunny region of Spain, and in autumn in the unchanged, original format in the mystical Bohemian Switzerland.

From April 20th – 23rd, 2023, riders will get the unique opportunity to explore the beautiful Pyrenees region and its stunning views, while riding the paths winding between the fields and the gravel tracks down to the foothills of the mountains. This is a chance to escape the cold, gray early spring days and spend an unforgettable weekend in sunny Aragón.

Once again, the event will be split in two; on the one hand the Border Bash which includes three days of camp and two days of riding with different courses to choose from, and on the other hand the Big Bash, a full day gravel adventure with an early start on Friday, in which the starters will face a nice but challenging route of 240 kilometers and close to 4.000 meters of elevation. All participants, regardless of the event format they chose, will gather on Saturday night at the base camp in Camping Cañones de Guara y Formiga for a closing party including a live band performance and “Las Jotas”, a local folk show.

Regarding the place where the camp is going to be held, it’s called Sierra de Guara, a mountain range located in a Natural Park close to Huesca, Aragón’s capital city. It’s famous for its nature, beautiful landscapes, water dams, and especially because it has a lot of canyons perfect for practicing outdoor sports. All these ingredients make the area very attractive for graveling, discovering places, and going on new adventures.

The event is characterized by its welcoming international community and relaxed, non-competitive atmosphere. As the organizers emphasize, it is not a race! At the camp, participants will be able to craft a riding experience tailored to their individual strength and perseverance. Whether you’re looking to challenge yourself with a long-distance course, or take it easy and make some friends, the camp offers something for everyone. Border Bash promises to retain the same spirit in the new location. More details about the routes and registrations can be found on the website of the event.

In the meantime, you can read about the event and its atmosphere in our report of its 2022 Bohemian edition. 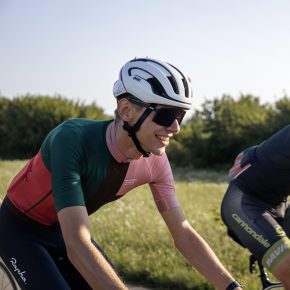