It’s still January in Mallorca, riders have not started racing yet but all of them are eager to see if the numbers they have been making during the last weeks pay off, or if the rest has been training harder or smarter than them. This set of races is not a big goal for any of the participants, but it is a great opportunity to publicly show that they can perform at a high level with their new jersey and, some of them, with new teammates. At the Challenge Ciclista Mallorca you will find a few WorldTeams that will not have the pressure they have in other races, some ProTeams willing to prove they can match the level of the best riders in the world and even Continental teams that want to continue progressing in the ranks, hoping that their disadvantage in sporting level and budget will be reduced in the near future.

On the first race day, at the start line in the small village of Ses Salines, most of the teams were getting ready quietly, without any distraction and with serious faces, like if they were the final moments before the Queen stage at the Tour de France. “There is no need to be stressed or too serious before the start because no one knows what is going to happen so there is no point in panicking” – said Hennessy, a rider from the Canyon dhb p/b Soreen team. They were chilling by the side of the road, listening to music and getting focused on what was coming but in a more relaxed way. All of them knew every detail of the course, as they had done a recce ride the previous days and had discussed the difficulties in the team briefing the previous afternoon. In that kind of meeting, the new faces of the team were already involved in the race analysis, bringing the experience they had acquired in their previous teams or pointing out something that the others had not taken into account.

Like all the smaller teams, Canyon dhb p/b Soreen wanted to place one of their riders in the initial breakaway and, if not, get the best result possible in a presumably bunch sprint. The plan seemed to work, as Alex Colman succeeded in forming an initial break of seven riders, but the top teams were not happy with the group and brought it back. Then it was a matter of protecting their sprinter, but a puncture and a posterior crash just after managing to get back to the front of the peloton ruined all the established strategy. It could have been worse, as last year in the same race the team finished with five riders crashing and two broken bikes.

Watching first hand how the strategy designed during the previous days suddenly collapses is not something easy to digest, but the positivity and calmness shown by each of the members minimized the importance of the misfortunes. For example, when the initial breakaway didn’t pan out, some riders talked through the radio to cheer the rider that tried to be present in there. A few kilometers later, he himself went to see the team car to explain to the DS what happened, with a helplessness face after not succeeding with the plan he had in mind for that race, but satisfied and smiling when going back to the back of the peloton after the encouraging chat.

We could witness this and all about the rest of the day of a team in a race thanks to Hunt, the wheel sponsor of the team. Both parts have been partners for four years and know each other very well, as you could see by the confidence that Tim Elverson and Simon Holt, the Team Owner / Manager and Sporting Director, respectively, have in the representatives of the brand that came to Mallorca. It is not a distant relation like other agreements might have; in this case, riders are a key part of the research and development of new wheels, which helps the brand keep moving forward into what already is a bright future, with products that excel and perform better than the best well-known brands in the cycling world, as they show in the white paper that came together with the launch of their new range, the Aerodynamicist wheels.

When the team returned to the hotel, the task of the soigneurs switched and, instead of preparing all the nutrition for the race, it was then time to allow the riders to recover as fast as possible from the effort by massaging them. At the same time, the mechanic, who during the race was at the team car ready just in case any of the riders had a problem with their bike, started cleaning all the equipment, a task that extended into the darkness of the night.

Once again it was time to discuss the race of the following day and, after that, all members headed to the buffet, where all the riders from several teams gathered to continue replenishing the tank with carbs and more carbs. Nonetheless, unlike many people think, there was nobody weighing their food or checking the nutritional values of every piece of food they put into their mouths. It was not the time to restrict the caloric intake since every single calorie would be burned the following day. As a result, the dining room seemed the place of a contest about what rider put the biggest amount of food in a single dish.

The Challenge Ciclista Mallorca is composed of four consecutive race days but they do not share a common general classification, so riders may participate in all of them or just a few. You could tell who was resting that day because they went for breakfast later, and instead of talking about race tactics they were planning the recovery day ahead. 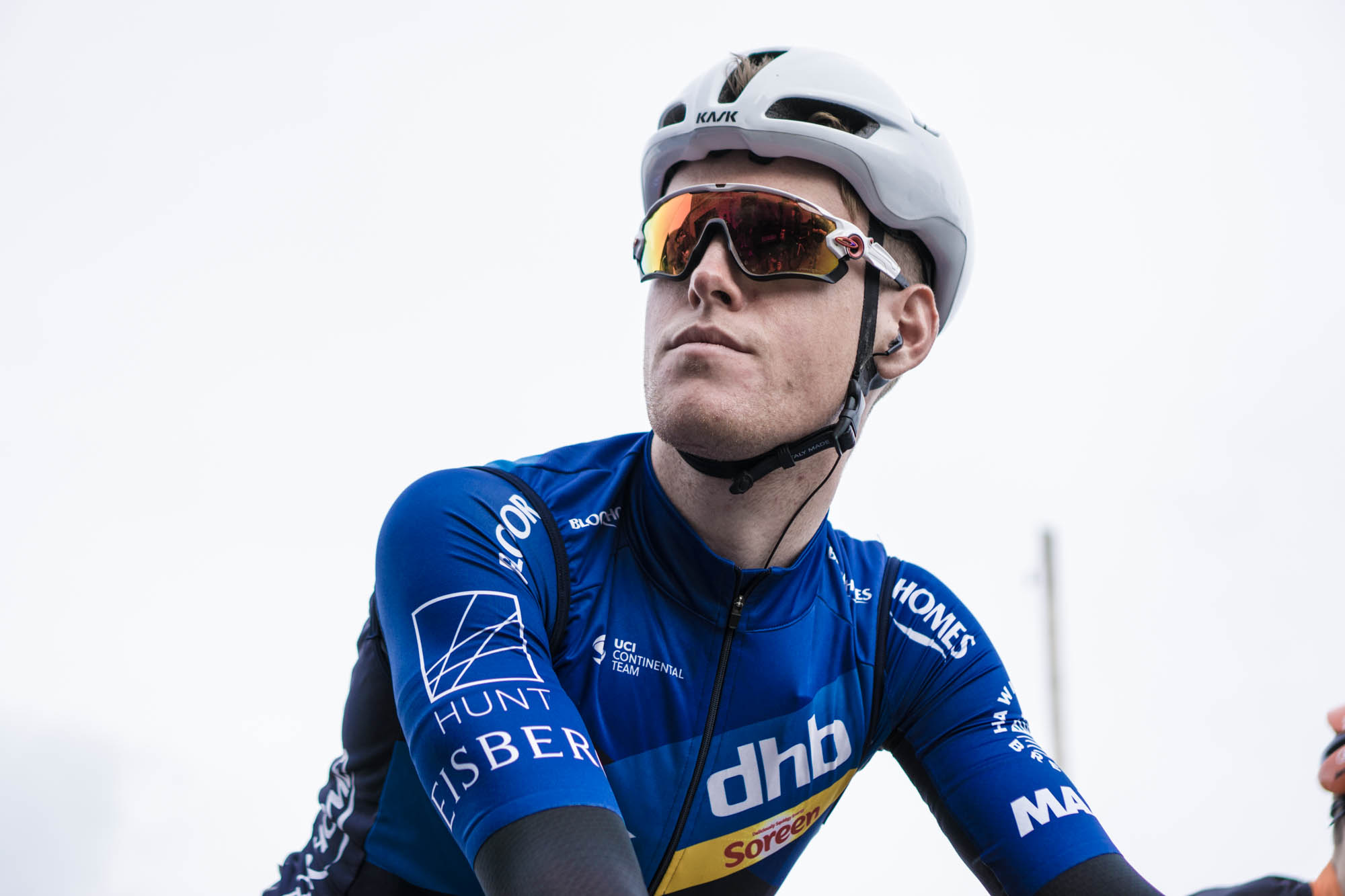 The “unlucky” ones had to be sure that they had everything ready although, with the help of the soigneurs, who were waiting for them, everything was easier. It was at this point that the obsession for details of certain riders stood out; Max Stedman checked his bike’s brake calipers not once but twice, and Callum Macleod, who forgot his GPS head unit, covered the mount with black tape to avoid any distractions. It was also curious to spot a wooden lucky charm inside the helmet of the young rider born in 2000, which he had been wearing for a long time.

We left on Saturday evening but the team still had one race to go. Along these four days, the team got a handful of valuable UCI points to support their hopes of becoming a ProTeam in 2021, which would locate them as the only British team in this category.

Racing so early in the season and against some of the best teams in the world was optimal for Canyon dhb p/b Soreen in order to see where the level of the current roster is. In the UK there are not many races that suit the abilities of the climbers of the team, like Max Stedman or Dan Pearson, so it was also important to be here to do the first tests. “Last year in this race I got ill so it was not a good start at all”, said Max. 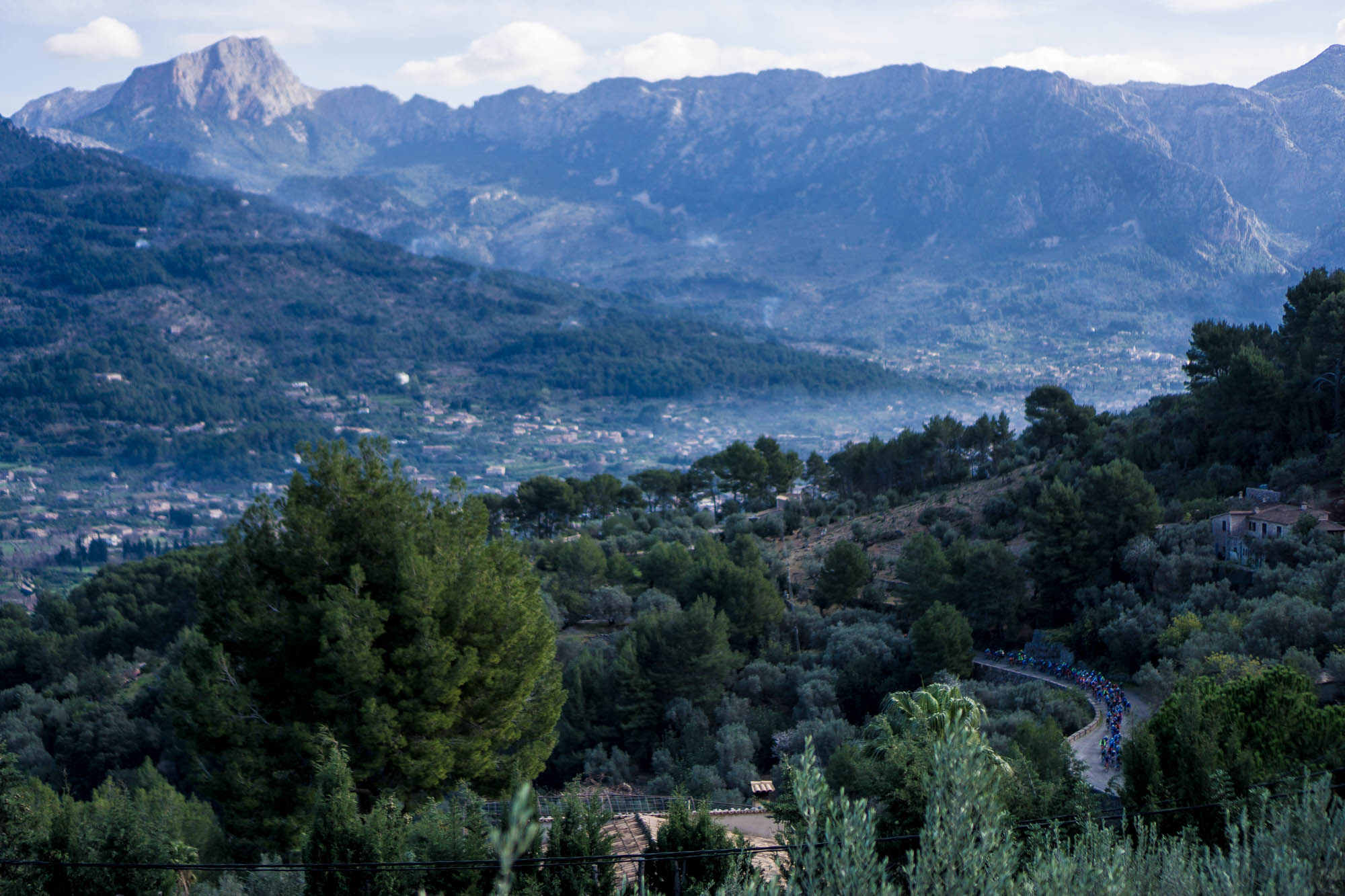 As some riders suggested, in 2019 they were overwhelmed by the level here in Mallorca, but as the season went on, they started performing better. Last year’s invitation was a bit of a surprise as it was one of the first years of the team at Continental level, but the domination of the team in the domestic scene (Tour Series, National Road Series, and National Circuit Series) and the good performances in one-day and stage races around the world (mainly in Belgium and France but also in China) properly justified this second invitation. The races of the Challenge Mallorca are not one of the biggest goals for the team, and neither is the Tour of Antalya that takes place in a couple of weeks, in which the team will participate for the first time. They are important races for exposure and testing, but in February there will still be people making his debut this season, as some riders pointed out. A part of them, including the new signing Jerome Baugnies, will be peaking between March and April, a period of time with a good amount of races in the European continent. The Belgian rider that comes from Wanty – Gobert has already shown his experience for example while talking on the radio or guiding his teammates through the bunch, and his good results in these first races of the year give him a lot of confidence for his fresh start in the British team. The other big signing this season is Brenton Jones, the Aussie sprinter that will land in Europe in late February after spending the first part of the year in the Australian summer. Apart from helping the team get more wins on one-day races like he is used to, one of his main tasks will be mentoring riders like Matthew Bostock, who wants to switch their mentality from a domestic-focused one into a winning attitude concentrated in UCI races.

The events composing the Challenge Ciclista Mallorca were the first of many .1 or above category races in which the team will be present this year, and roughly 80% of this season’s calendar is already set. The creation of the ProSeries calendar has obstructed the process of getting an entry for some events that the team wanted to race, but Canyon dhb p/b Soreen is excited for the season ahead. “I look forward to all the races; I do not set limits to what I can or cannot do, and I enjoy racing and suffering”, said Jake Scott, one of the new members of the team. That is the kind of commitment and confidence that emerges from every single rider, which will create the perfect formula for success this season and many more to come.

Jack Thomson, also known as Jack Ultracyclist, had a fully-booked…