A few days ago we had the opportunity to attend the exclusive presentation of the new Raso model directly from its creator, a reference when it comes to custom-made carbon bikes, Enrico Sarto. It is always exciting for us to attend an event like this but, this time, it was even more so because of the context in which we found ourselves. 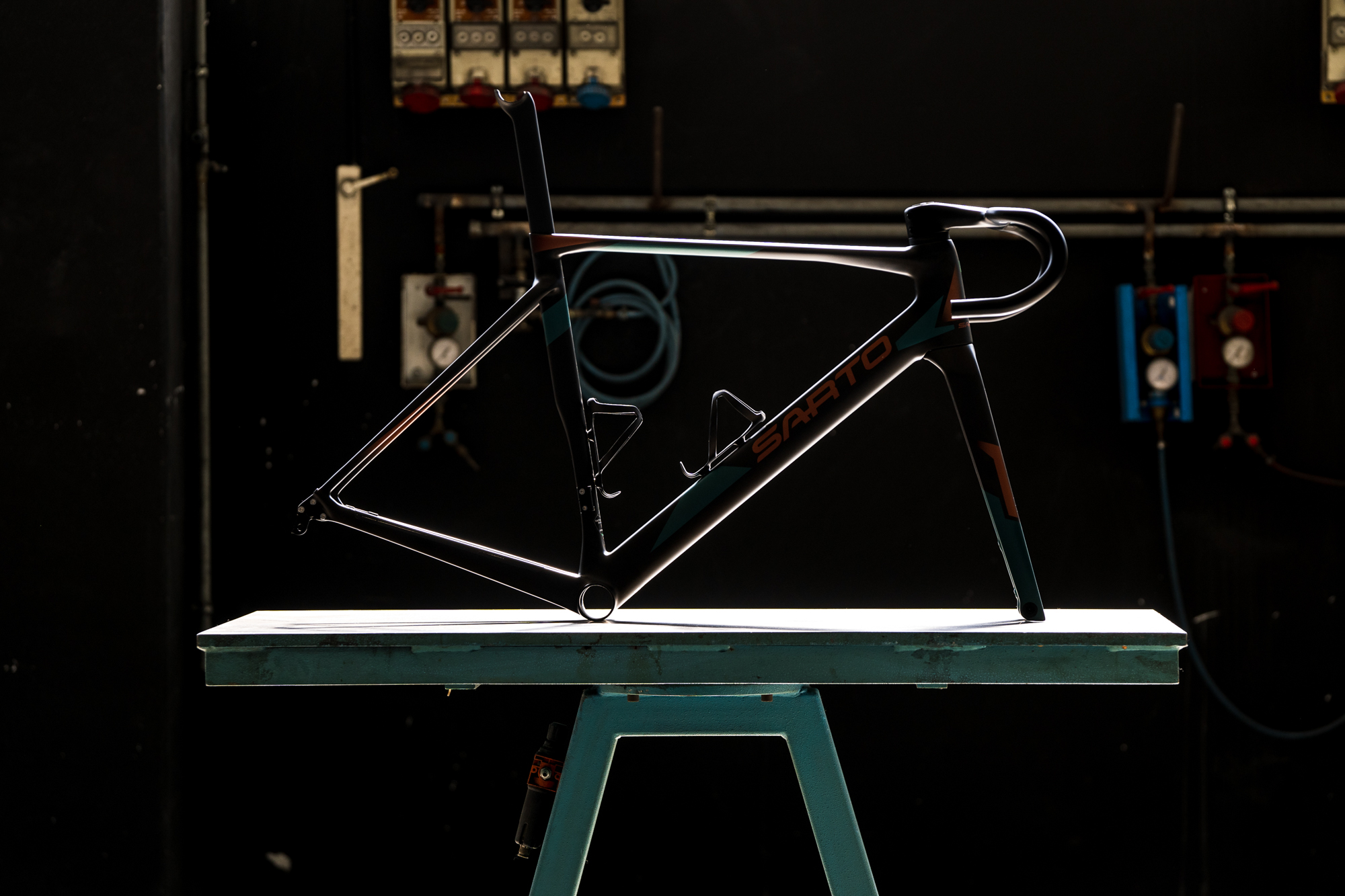 We traveled directly to the brand’s factory, located in Veneto (Italy), and met with Enrico and his marketing team. We were in a room full of bicycles as if we were inside a catalog of dream bikes. We listened attentively to the explanations and details that revealed the new Raso to us while we appreciated a version of the frame, still unpainted, where all its peculiarities could be appreciated.

We were in front of a new jewel of the Italian firm, the Raso model was ready to be presented.

When Enrico explained to us how the process of designing and creating the Raso went, we could easily see on his face and gestures how satisfied and proud they were for having managed to create this new model. Behind those carbon tubes, there was a lot of dedication, effort, and hard work until the expected result was achieved.

This new bike is designed to be fast, inspired by a purely aerodynamic character but without sacrificing comfort and versatility when choosing the terrain we want to ride on.

At first glance, the geometry of the Raso could remind us of the Lampo model but, in fact, it is more of a fusion between Lampo and Seta Plus, since materials and technologies that are present in these two predecessors are used in the manufacturing process.

Sarto has put all his experience and years of research into this new model to offer good rigidity and, at the same time, an improved wheel arch with clearance for tires up to 35mm, which offers him the versatility to float over any road at high speed.

To complement this frame, we find a nice cockpit in which everything is integrated and hidden to give continuity to the aerodynamic line of the bike. As for the drive train, the frame has been designed to be compatible with other brands, allowing the customer to choose the type of assembly and components that they like best. In the case of the seatpost, Sarto has manufactured a carbon one that goes perfectly to complete the set. 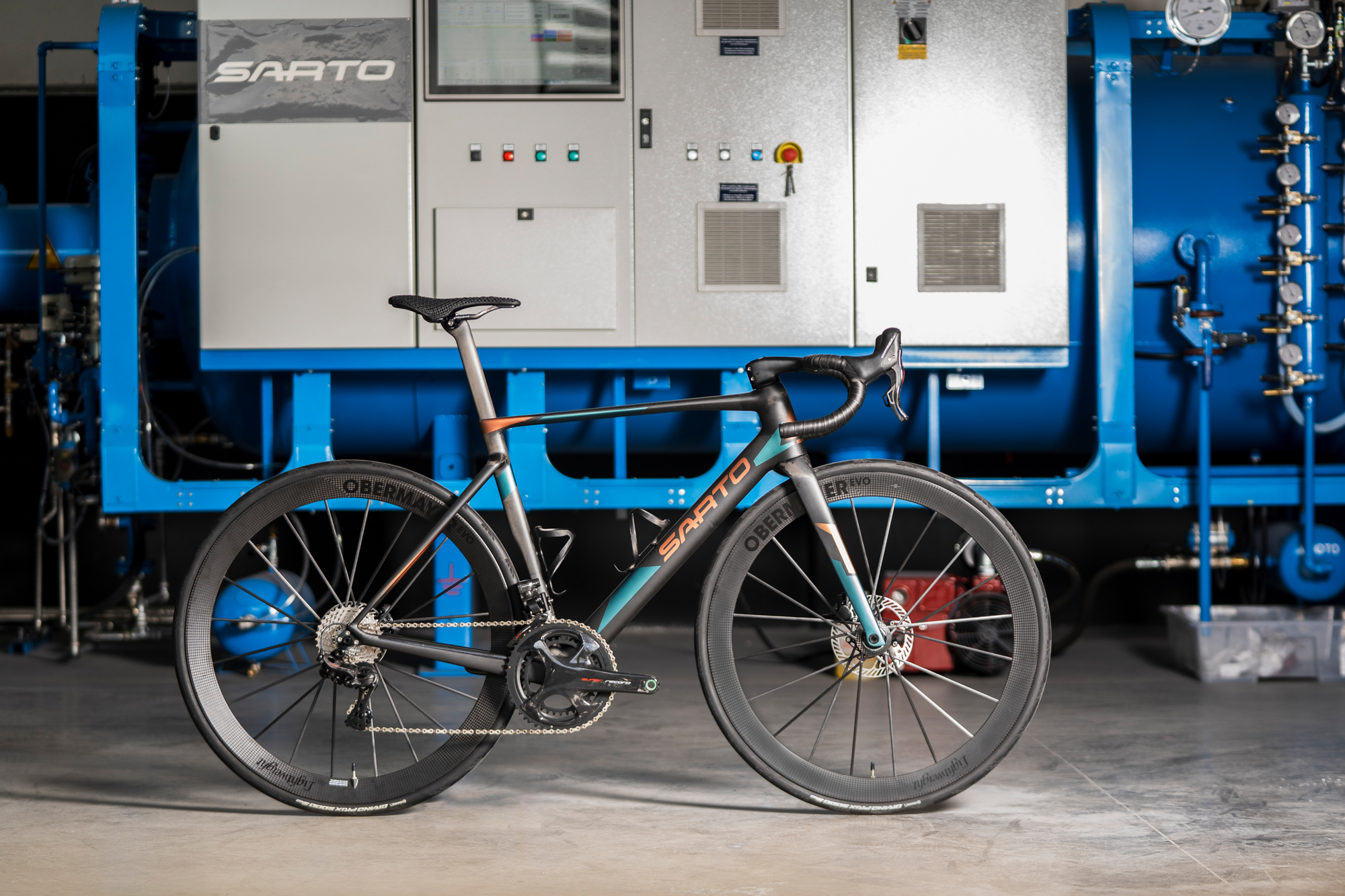 The Raso is not presented as a gravel bike, but rather as a road bike designed for speed enthusiasts who do not want to give up that touch of adventure and satisfaction by discovering new routes without fearing the terrain they may encounter.

A turning point in Sarto

The arrival of this new bike does not only translate into the addition of a new model to the brand’s portfolio, but in this case, it goes beyond that. The manufacture of this new frame has been accompanied by the acquisition of new machinery that has allowed Sarto to control the manufacturing process from start to finish, making Raso the first model built entirely in the brand’s factory. Until now, they already controlled most of the process except for a small part that was outsourced.

This improvement represents a great advance and, without a doubt, one more step in Enrico’s commitment to promoting the brand, stopping manufacturing frames for other companies, and taking the full custom that characterizes them to another level.

As in all its models, Sarto can customize the perfect Raso to reach the client’s needs.

After meeting the new Raso first hand, it was time to test it and see if all that theory that we had been told made sense and was translated into practice.

We left from the small town of Montegrotto Terme, in Padua, and did a small loop of about 40 kilometers through the area, more than enough to put the bike to the test. The unit we used was mounted with a Campagnolo Super Record EPS groupset, Campagnolo Bora Ultra WTO wheels with a 45mm profile and Continental Gran Prix 5000 tires. The icing on the cake was the new Selle Italia SLR Boost 3D Kit Carbonio Superflow saddle, which until now we had not had the opportunity to see or try ourselves, and the truth is that we were very satisfied.

Regarding the first sensations on the bike, they were as expected and met expectations. We enjoyed it a lot. The Raso is fast, especially at the time of flats or descents. It’s also stiff enough so that, despite its aerodynamic appearance, it performs remarkably well on climbs.

When going downhill, we noticed how easily it gains speed and how the disc brakes help us to optimize the braking timing turn after turn. Perhaps we did notice that in the tighter corners it is less reactive, but despite this, we were in full control of the Raso at all times.

Even if we did not have the opportunity to test the bike on a gravel track, we were able to appreciate the extra comfort on some sections of the road that the route led us along surfaces in poor condition.

A few days ago we had the opportunity to attend…