In a season in which it has not been possible to get close to the road to see professional cyclists competing in the first person, television broadcasts have compensated for this. While it has always made more sense to watch the entire race from the television than to see the riders pass in front of you and not know anything more about them until getting home, there is nothing like being able to say “Sagan looked at me when I was cheering for him” or “look son, I have a new bidon for you”.

Those of us who watch the broadcasts almost in their entirety have been able to visit from the distance the most emblematic places where the various televised races took place and, this way, we could detect the messages of support written in the route through which they passed through.

Painting the roads with messages of encouragement for cyclists has been common for years, but recently, several groups of people, aware of the media exposure it entails, have raised the level of the sketches. Now the remarkable pieces capture the attention of both the fans who see them from the shot of the helicopter, as well as the cyclists themselves.

The guys from Guilty76 have become well-known for their street guerrilla since they painted part of Mont Ventoux in 2015 during the Tour de France stage that ended at the mythical Alpine climb. Even the police considered that it was something that had to be preserved and made sure they could finish painting. They can also say that they own what is probably the highest street-gallery in Europe, as the Col de l’Iseran is still colored with the drawings they did in 2019.

It is not easy to leave your mark on the road. Most of these groups of people paint at night to avoid obstructing traffic and disturbing as little as possible in order not to attract attention and avoid the visit of those responsible for the area.

In addition, you cannot draw what you want, because for example, in the Tour de France, there is a group of people who drive along the route of the day ahead of the advertising caravan and are in charge of destroying all those drawings on the road with obscene or commercial messages, preventing them from being seen on television. We have all seen several videos in which this group transforms the phallic shapes painted on the asphalt into bicycles or butterflies.

Depending on the location, multiple permits are required in order to get the job done, while if you run into the right people, they even support you. “In Germany they would arrest us if we do this, but in France they love it” – says Florian. They have also painted the cobblestones of the Muur van Geraardsbergen, one of the pilgrimage sites of European cycling. Although people did not give them hope to do so, they managed to convince the mayor of the town during the Grand Départ of the Tour de France in 2019, which started in Brussels. Until then no one had dared to paint the mythical climb, but they went there and did it. 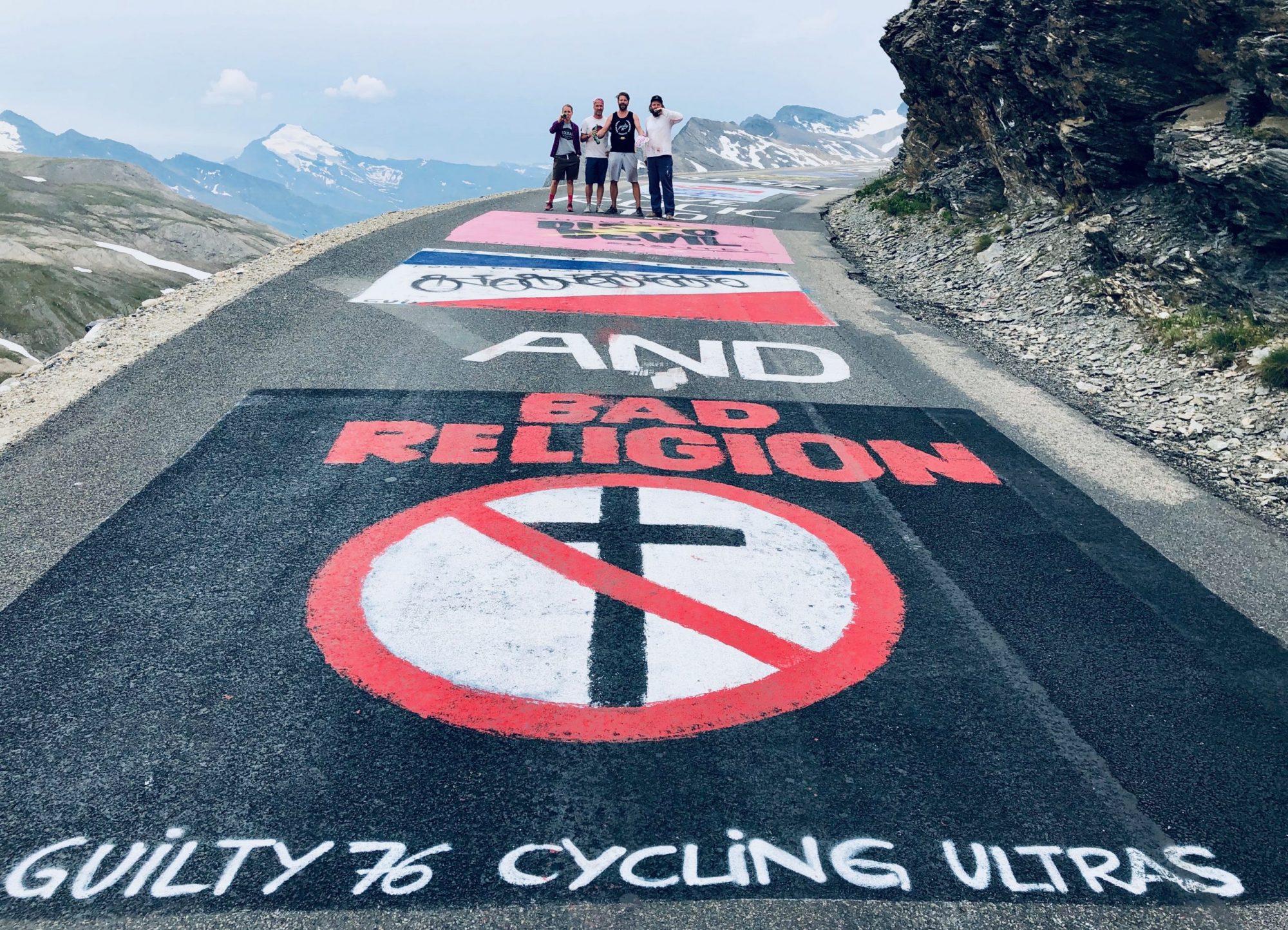 Coming from Frankfurt, Guilty76 does more than painting simple words of support for cyclists and teams they want to cheer on. “We have never received bad feedback on our work, but what surprises us even more is that we have never been arrested” – laughs Florian. They have a close relationship with several professional cyclists, who let them know if there is a change of route or tell them what they think of riding over that painting that they have dedicated to them. Their pieces do not go unnoticed, and to this day it is already common to see in the German broadcast of the main races a section dedicated to showing their latest works.

“Painting names is something that everyone can do, so we decided to paint huge messages, large-scale jerseys, and in the end we decided to start closing the entire road” – Florian from Guilty76.

Looking ahead to next year, they have big plans for Paris-Roubaix. They are loyal supporters of the German cyclist John Degenkolb, who has recently been rewarded for his efforts to save the junior race, which would have disappeared had it not been for his help. In compensation, the organization decided in early 2020 to name the 3.7km cobbled segment between Hornaing and Wandignies-Hamage after its name. The next time the Paris-Roubaix takes place, Guilty76 will be there to color part of the road and pay its own tribute.

Puncheur has recently stepped into the street-art scene with portraits of certain cyclists during the Classics season. Boonen, Sagan, Van Aert, Wiggins… Something all of them have in common is their attitude and courage. For the past Tour of Flanders, they also drew several popular characters, being conscious of how many people would be at home watching the broadcast on television. Local commentators José de Cauwer and Michael Wuyts, known to every Belgian cycling fan, were painted atop the Koppenberg.

The first street-art was dedicated to Tom Boonen in 2017, the season of his retirement as a professional and his last chance to win Paris-Roubaix for the fifth time. Since then they have perfected the technique, based on painting on a cardboard stencil. While at first they used basic, easy to erase sprays for fear of retaliation, the pieces they paint today are long-lasting on the asphalt.

“I’ve since invested in bigger cardboard plates as it’s easier to work with when it’s the same thickness and strength, and now I print the eight or nine A0-size images out from the local print shop” – Thomas from Puncheur.

In various places in Belgium, you can still witness the work they did during this year’s Tour of Flanders or the tribute they did to Van Aert after his successful Tour de France, prior to his attempt to conquer the World Championships.

With the repercussion generated, there are several commission jobs that have been requested from them, whether to decorate shops, add an artistic touch to an event, or pay tribute to a certain athlete, such as the recently retired swimmer Pieter Timmens.

As its diamond-shaped logo indicates, Puncheur will stay true to its identity and will continue to honor the toughest riders on the international scene. Their plans for next year will focus, again, on the spring classics, but they also intend to decorate the roads on which the Tour de France and the World Championships will take place next season. 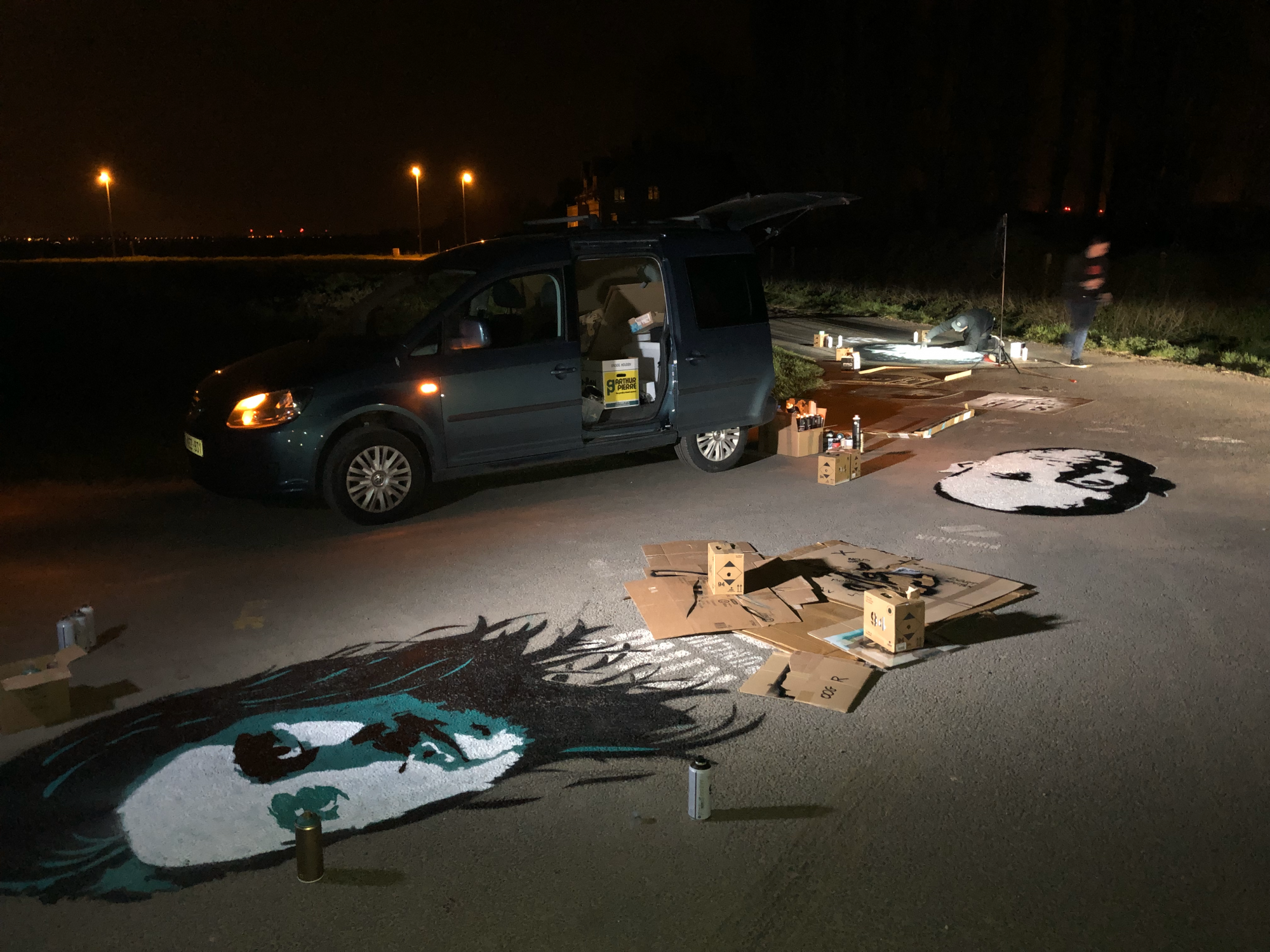 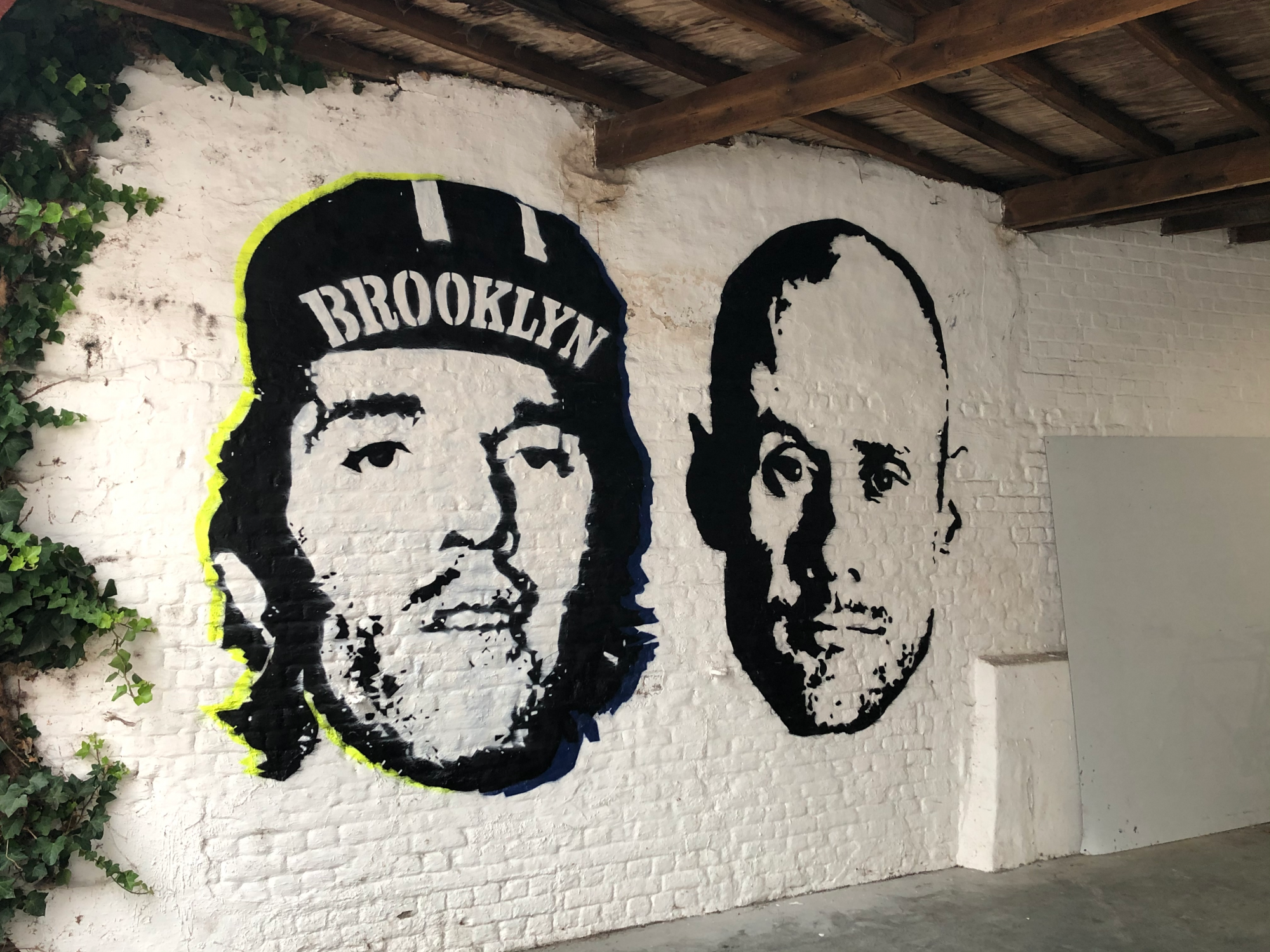 Same as with the graffiti on the walls, in street-art it is not allowed to paint over an existing piece. So many times it’s about who is the first to get to the best spots. This year, Guilty76 traveled to the Grand Colombier two weeks before the race to make sure they could draw what they intended.

Both Puncheur and Guilty76 awaited with great expectation the presentation of the 2021 Tour de France route, eager to know which climbs were chosen this time, and noting what their target would be for the French Grand Tour. So do not be surprised if next July we see certain sections of Mont Ventoux or the mountains of the Pyrenees painted with the street art of these collectives.

The exact route of the Tour de France. Every stage…