Last weekend we were in Finland testing the course of what will be the first edition of FNLD GRVL, a race that promises to become a must for all gravel enthusiasts already since its inception. It came as a somewhat unforeseen opportunity for all the parties involved, but rather than a simple whim of a successful life outside this sport, it is a decision that makes complete sense given the perfect terrain in the region for this cycling discipline.

Not a random location

The Formula 1 driver Valtteri Bottas took part in SBT GRVL in 2021 and was impressed with everything involving a gravel event of that magnitude, from the racing to the community behind it. The co-founder and owner Amy Charity, together with the marketing agency co-owner Chris Lyman, reached out to him suggesting a partnership for a similar race in his home country, and he jumped on the opportunity.

FNLD GRVL will take place in June 2023 in Lahti, an hour north of Helsinki. The region’s gravel roads, which weave through and around the lakes, make for unforgettable gravel riding and endless route combinations. Lahti has already hosted several top sporting events in the past, and we checked firsthand that the lakeside city is able to accommodate the +1.500 riders that are expected to take part in the race in its first edition.

After just three years of organizing the race in Steamboat, Colorado, the people behind SBT GRVL decided to go international. While other US races stay local, they preferred to create an event abroad, offering a way to escape from the already busy gravel calendar in the United States. “Gravel in Europe is at the same stage as it was in Colorado five years ago”, said Amy. They will now extrapolate all the work done and their vision to Finland with the aim of creating the premier gravel event on the continent.

Just a couple of days after SBT GRVL, which took place on August 14th, they flew to Finland to inspect the area of what will be their new event, FNLD GRVL. From Thursday to Sunday, their days were filled with meetings with local authorities and test rides to provide an answer to open topics like the exact start location or finish loop. It was their first taste of Finland after announcing the FNLD GRVL announcement, so they had to take advantage of their stay in the Nordic country to make sure that everything was under control ahead of the event.

We joined them on Friday evening, ready to test the whole route the next day. We missed the shake-out rides and, most importantly, the refreshing swim at the lake, but we were eager to make the most of the weekend. 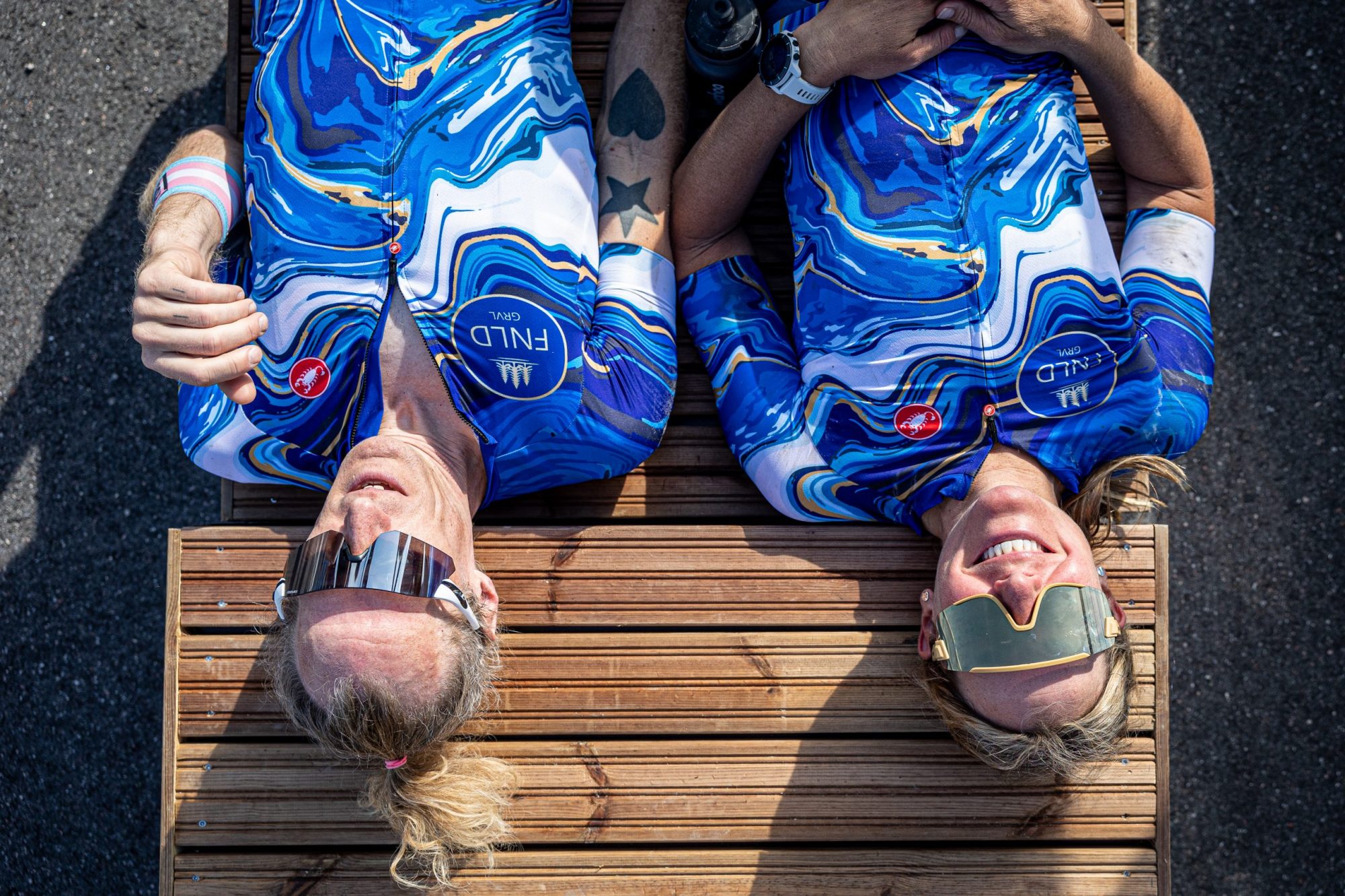 With a late arrival, we started setting up our bike once we stepped into our room, but stopped when we barely could keep our eyes open. The next morning we went to have breakfast and, without being able to meet anyone yet, we asked if anyone had a pump and a nipper to finish the bike assembly.

Who stopped eating in order to help us? Alexey Vermeulen, one of the most prominent figures in the off-road scene. He traveled to Finland from the United States after lining up for the mountain bike race Leadville Trail 100, an event that is part of the Life Time Grand Prix and is considered to be amongst the most prestigious races in America.

Unlike most fellow professional cyclists, Alexey likes to add some cycling-related leisure to his calendar, with this test event being a clear example.

During his time as a rider of the road team Jumbo-Visma he had to focus his entire life on racing, but after realizing what really motivates him, he now decides himself when and where to race. Even if he is currently third in the overall classification of the Grand Prix and the last two rounds are around the corner, he took the week in Finland as a great opportunity to hang out with people from the industry and create media content, which as a privateer is also very important.

Back to our experience, on Saturday at 8 AM we gathered with the organizers and all the other invited individuals in Lahti’s sports center. With ski jumping facilities, it reminded us that, although we were going to ride our bikes on a warm day, winter sports are the most dominant in the country.

The mandatory photos ahead of the start were taken, and we of course made sure we appeared just behind Valtteri and Tiffany Cromwell, rider for CANYON//SRAM Racing. The ride leaders gave the green light and we headed northwest within the Päijät-Häme region.

We stayed as a group until we reached the 30-kilometer mark, where the split between the different courses takes place. We had several reasons to choose the short route over the full one, but as clear candidates for the win next year we had to make sure that we knew where to make the decisive move.

Riding on tarmac felt weird, as the first 55 kilometers were entirely off-road. In the morning we were told that there was going to be a coffee stop, so we thought that at some point we would pass by a city where we would find a place to sit. Without asking anyone we realized that it was not going to be the case, as we barely came across a handful of isolated houses in the first 100 kilometers. In the middle of nowhere, the people from Kahiwa Coffee Roasters had set a tent ready to provide us with the caffeine shots we needed and some korvapuusti, the local pastry par excellence.

The ones that wanted to digest food stayed in the shadow for longer while others resumed their ride. We ended up rolling out of the feed zone with Alexey and two fast guys from The Service Course, which was a big mistake as we spend the next couple of hours or so barely hanging on to their wheel. Our heavy breathing was probably heard by everyone within a five-kilometer radius because in such a wild place there were no other noises but the rolling of the wheels.

Most of the elevation gain in the FNLD GRVL course comes from the rolling gravel paths and not a climb in particular. In addition to a hilly start, only a steep ramp 13 km from the finish stands out from the rest of the route. We ended up accumulating 1.900 meters of elevation over the 178 kilometers of the route.

During the day we discussed what are the possible racing scenarios ahead of the real event, and the ones with racing experience mentioned the several segments in which the race could be split. The gravel paths are wide, but at the top of our heads, we remember that there is a two-track grass field that will stretch any group that may remain with around 80 km to go.

Back in Lahti’s sports center, there was a common comment; it was one of the best gravel courses we had ever ridden. The varied surfaces and landscapes along the route amazed each one of us, and now we cannot wait to see others race on the flowy gravel in a few months’ time. 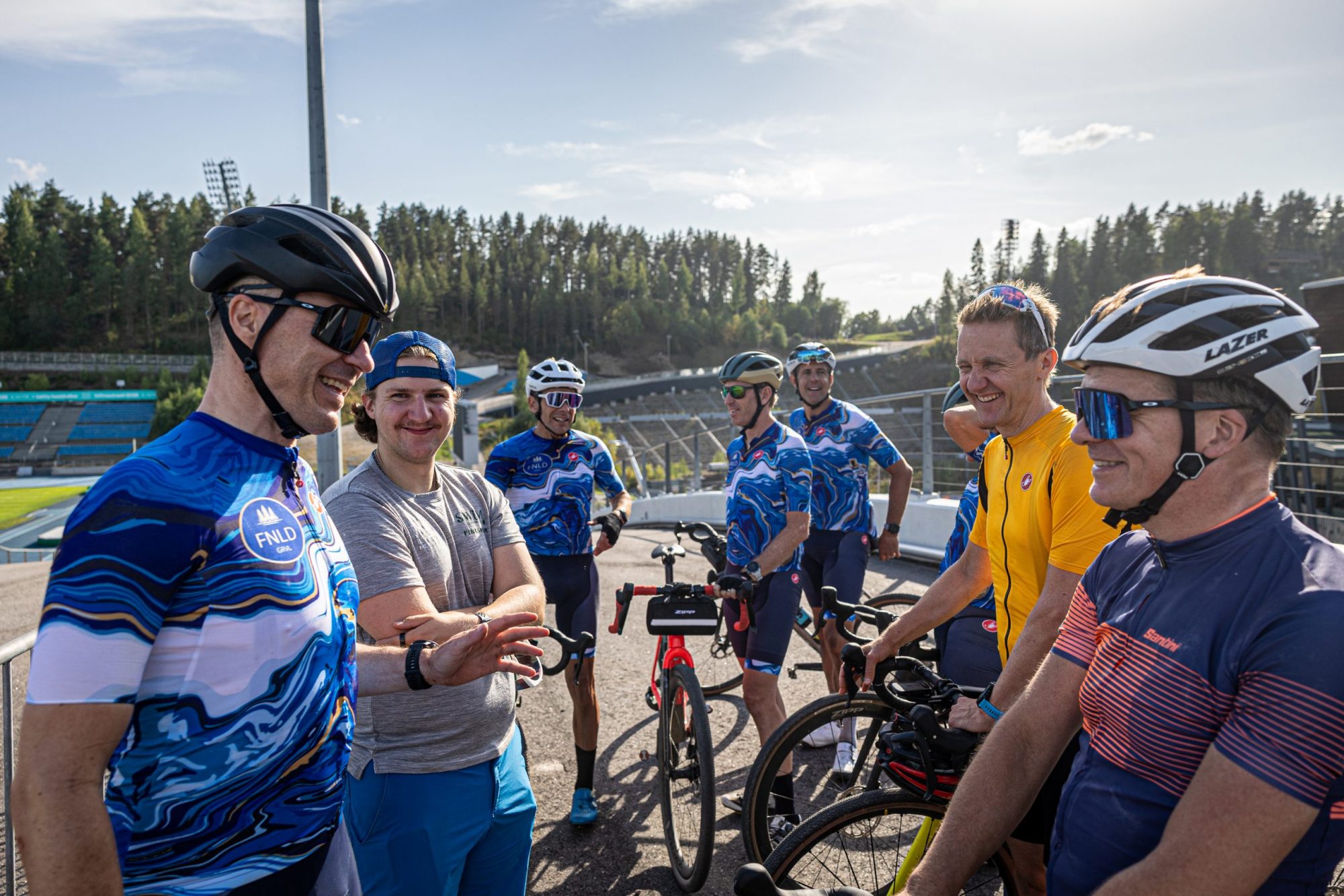 We spent a bit too much time debriefing the day while contemplating the massive ski jumping infrastructure, and our chamois was kindly asking us to be washed after a long way on the saddle. We went back to the hotel, took our Tactic kit off, and realized that we got a tan in Finland, who would have thought?

On the following day, while some headed home and the organizers were in meetings, we wanted to explore the surroundings of Lahti on our own. With no feed stations or villages on our route, we filled our Restrap bags with food, and soon realized that he had underestimated the difficulty of the trails while planning the route. It was nonetheless another great day in Finland, disconnecting from civilization and appreciating the beauty of nature.

On its own, the route is exciting enough to attract people from around the world. Additionally, the good work made on other races by the organizers, together with the exposure that Valtteri Bottas brings to the event, will put FNLD GRVL on everyone’s radar already in its first edition.

FNLD GRVL should definitely be one of the races to attend in 2023. As of now, there are no concrete dates confirmed, as it depends on the racing calendar of Valtteri and Tiffany. Nonetheless, make sure that your agenda for June is empty, and get ready to expand the boundaries of gravel, eat a lot of korvapuusti and enjoy the rest of the weekend program full of activities to make the most of your stay in Finland.