As you may know, Spain is the country with the severest restrictions as regards freedom of movement during this lockdown. France and Italy are also in similar situations, and when you think about it, these are some of the countries where professional cyclists reside. With this, we mean that it is hard to be obliged to stay at home, but knowing that a large part of the pro peloton is in the same situation, one can only face reality and make the most of it.

Girona is one of the cycling hubs per excellence, and every season more cyclist set their eyes in the Catalan city to establish their new residence. Nonetheless, this pandemic started suddenly and the ones that were still not used to the way of living there took a quick decision and decided to go back to their hometown to avoid being stuck in an unknown environment. This is not the case for Freddy Ovett, who landed in the city back in 2016 and who clearly considers that, for him, Girona is home.

“I’m lucky to be spending this period with my girlfriend and her whole family, as being alone now must be tough”

The Australian rider from the Israel Continental Team is as eager as every other cyclist to start racing again, which is even more important for riders like him that want to establish themselves and gain the experience needed to step up to the next level.

The talent is there, as he is the son of the 800 meters Olympic champion and former 1.500 meters world record holder Steve Ovett OBE. Like Michael Woods, Freddy was very successful as a track athlete but after an injury, he started cycling and soon made clear he could prosper at this too. Father and son excelled in their finishing ability, but it doesn’t directly extrapolate to being a sprinter in cycling. In the end, it is a much more aerobic sport so it is all about endurance.

In 2018 he was a stagiere for BMC Racing Team, and although he couldn’t find a spot in the team for the following season, it was a good first taste of racing against the best in the world. 2019 didn’t allow him to continue growing, as he didn’t get the race days he needed. He signed for the second part of the season with the Israel Cycling Academy, and the team saw him as a future prospect so they made him an offer to be part of the newly created Continental Team.

Part of an ambitious project

The new project is exciting, and he feels he is well integrated into the WorldTeam Israel Start-Up Nation not only because of the races he has taken part with them already at the start of the season thanks to the UCI rule that allows a maximum of four riders from the development team to participate in certain events with the related WorldTeam, but also all the social media duties he is assigned as the team is putting a lot of effort into it to give visibility to the new sponsors and the whole project after the investment done this season.

The team has the title of ambassador of peace and sport, and they are now using virtual racing to help the fight against COVID-19. With their virtual rides on Zwift tagged as “Team ISN Medical Aid Ride” that are open for all, they collaborate by donating a mask to hospitals for every rider that joins. After the success of the first edition, they have announced more events, with some sponsors jumping on board as a claim to attract more fans, which in the end leads to more masks delivered to hospitals.

One of the few races he did before the global lockdown was the Tour du Rwanda, and what an experience it was.

“How often you get to go to Africa for a bike race? It’s a once in a lifetime thing”

On a professional note, he learned to be a domestique, which gained him a lot of confidence, but he did not only learn things as a cyclist but as a human being too.
He says that all people there were super friendly and received them with open arms. Despite the poverty of the region, the inhabitants were always happy. During the stay, the riders could experience the amazing weather and roads of Rwanda, something they weren’t expecting, and which gives them a good reason to go back next season. Coming back from Africa there were some plans to continue joining the WorldTeam in some Italian classics, but that didn’t end up happening for obvious reasons. 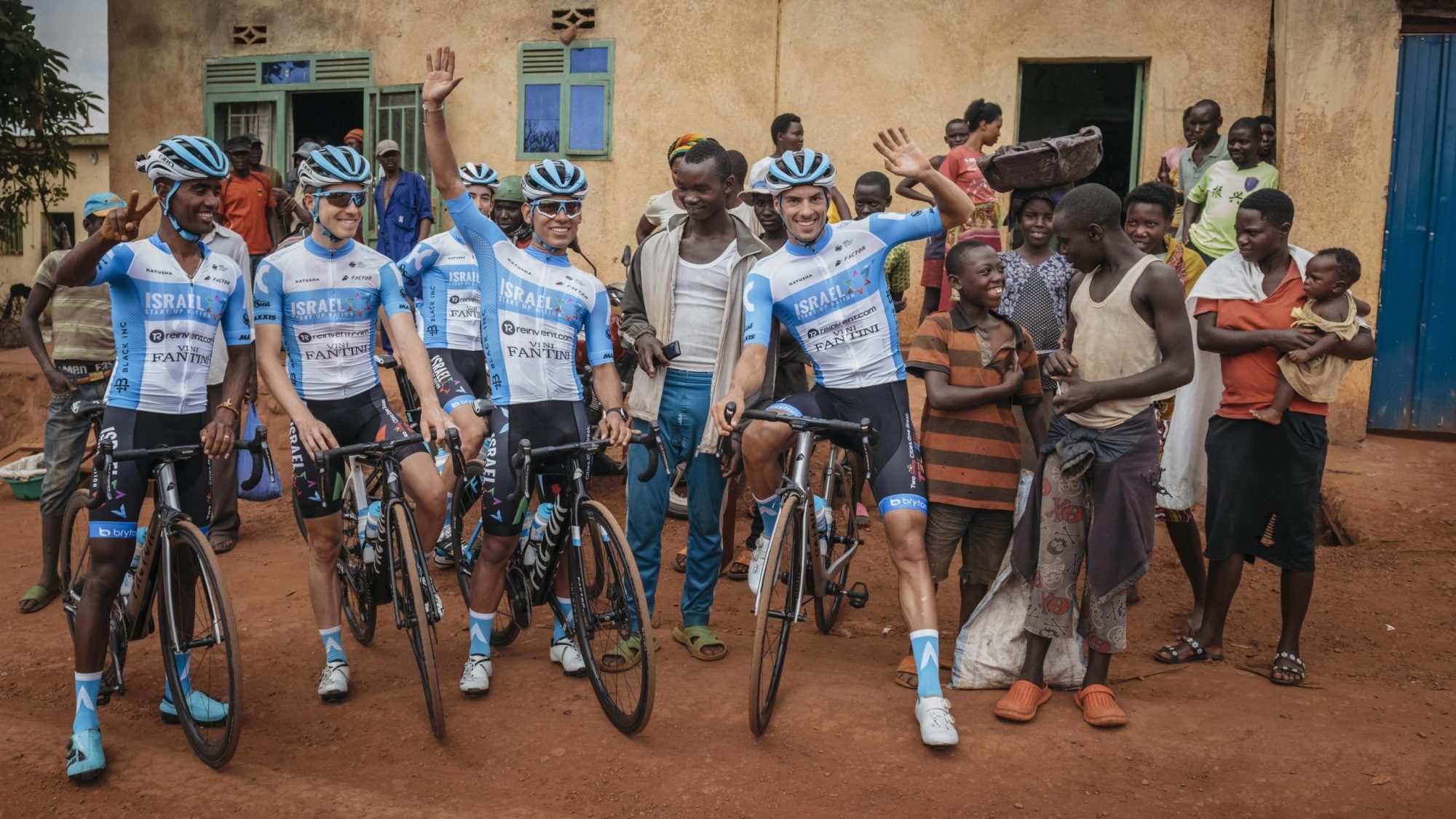 Freddy Ovett is enjoying his time in the team, and he is excited about all the progress he is making even on lockdown. According to him, Zak Dempster is one of the main reasons and he is being super helpful at all times. The former pro rider has now a managerial role in the team and they are every day in contact which we suppose may give him a lot of confidence in these rough times.
The team has handed to the riders some specific training plans to do on the trainer, and although no one faces a fitness test with too much motivation, the gains he has already made since the start of the situation are enough to trust the process.

With the lack of real races, Zwift is nowadays one of the only measures to compare the level of riders, and Freddy seems to be rocking it, taking in part in a lot of virtual races and winning most of them. He currently occupies one of the first places in the Zwift Power ranking, and even though it doesn’t mean a lot, it is a good reason to continue giving his best every day. Other cyclists take it easier and prefer to do a solo training ride instead of joining a race or a group ride, which we all know that end up being equally competitive.

A couple of races per day (sometimes one following the other but other times spreading them throughout the day taking a rest to study a bit in between) seems to be his new routine, but he is paying attention to his training load in order to continue performing. “I love to race and I take any opportunity to race. This is not like running, where being an individual sport you can plan your calendar and prepare at 100% for a couple of events during the year. In cycling, you train during the winter but once the season starts you are constantly racing.” His dad was well-known for his old-school training methodologies, which have little to do with the number-centric characteristics of indoor training tools, but he is surprised by how Freddy is dealing with the situation and he is happy if his son shows signs of happiness as he does.

Unfortunately, not many real competitions will take place in the near future, so he has to settle with the races he finds online. The next step inside this virtual world would be tackling the Pro/Am Invitational races that gather some of the best teams and are live-streamed, but despite his efforts knocking at the door, he hasn’t been welcomed yet.

From time to time, he also does some long-distance rides which are more strenuous taking into account that it is not the same doing it indoors than outdoors. Once the season restarts they all will have to be ready to race for 5 and 6 hours, so they have to try to spend as many hours on the trainer as possible and Ovett tends to use the Saturdays to do his long rides. On April 11th he did the whole bike leg (180km) next to Jan Frodeno when the German triathlete, that also resides near Girona, did an Ironman at home.

He is working hard to chase his dream of stepping to the top level of professional cycling, and he is in the perfect place for it. May the racing restart and let riders show how disciplined they have been in these uncertain times.