Dominique Powers recently stepped in full force into the world of cycling, both professionally and as a recreational cyclist herself. The bike is now a big part of her life, and not simply part of her cross-training or her tool to commute to work.

Cross-country skiing was her sport growing up, and then she was very into rock climbing for a handful of years. “Rock climbing is dangerous and most times you do it in group, so it was not a good idea to continue practising it when the pandemic hit” she says. Given the lockdown restrictions, she found cycling as a way to channel all the uncertainty in the world. She asked a friend to show her around in LA, as it is not the best city in terms of cycling infrastructure. A few weeks later, she was already doing 5-6 hour rides, because “what else was there to do?” she added, reminding us of how fortunate some people were of riding bikes even in those circumstances.

She has been now living in California for two and a half years, after spending a period of her life working in New York. Most of the shootings for high-end fashion brands and other types of advertising take place there, so as a digital technician that did on set colour editing and image management for photographers, NY was the place to be at that time.
Dominique briefly mentioned his role in major photo shootings like if it was not a big deal, but knowing that she has been part of campaigns for brands like Gucci and Tom Ford, and has had a say in covers for Vogue or The New York Times, we wanted to know more about what she did before stepping into the cycling industry.

“I’m there to help the photographer to tell the story they want to tell, like an extra set of eyes. I worked with a computer station that runs a software which allows you to do tethering, meaning that you can connect the cameras directly to the computer. When you take a photo, instead of being stored in a memory card, it is stored directly on the computer, and through that software you can do naming and file organization, but also colour editing, applying a colour curve so that the image looks like what the photographer wants. High contrast, black and white… colour has such an impact on the story”

She was communicating directly with the photographer and the creative director or client, and would be on set at least a hundred days a year. She and her computer station have travelled nonstop around the country, but now one of her most truthful companions has two wheels and not three legs. 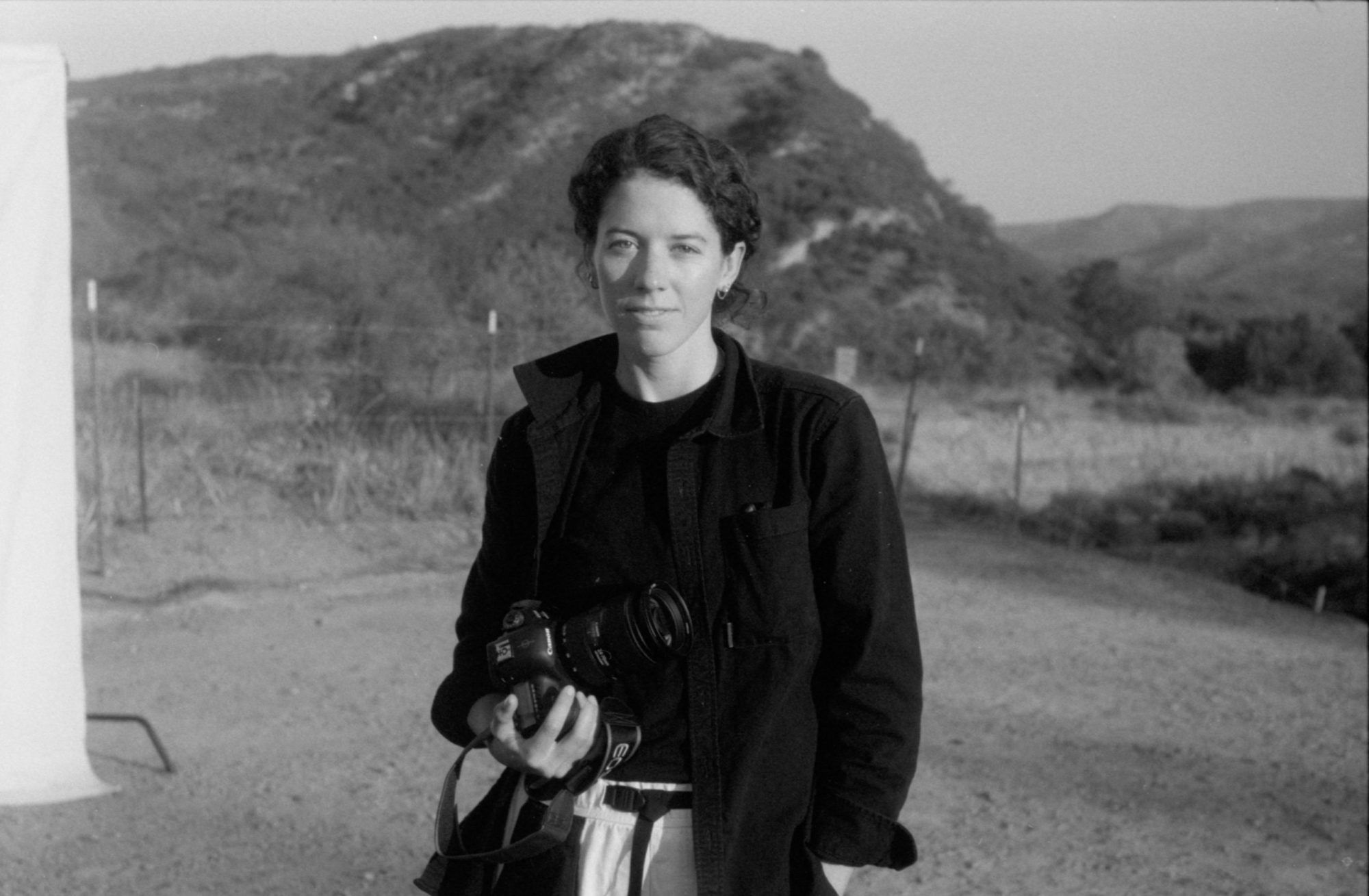 Nowadays, Dominique is focused on her own photography career, applying all the takeaways, knowledge and experience acquired throughout the years. She has gone from the restricted freedom of choice of photo journalism, a field in which you can’t really go beyond a predetermined set of parameters, to being entitled to explore new things with her own works.

Her biggest added value is the way she approaches her portrait photography, giving an important weight to the communication with the person being photographed. In that way, she manages to build a close relationship that is then reflected not only in the expression of the subject, but also in the lightning and composition.

A bit over a year ago, Rapha approached her to portrait Eliot Jackson, their first mountain bike athlete. She had been doing several non-cycling related portraits that summer, and that shooting was the beginning of her collaboration with a lot of companies of the industry. 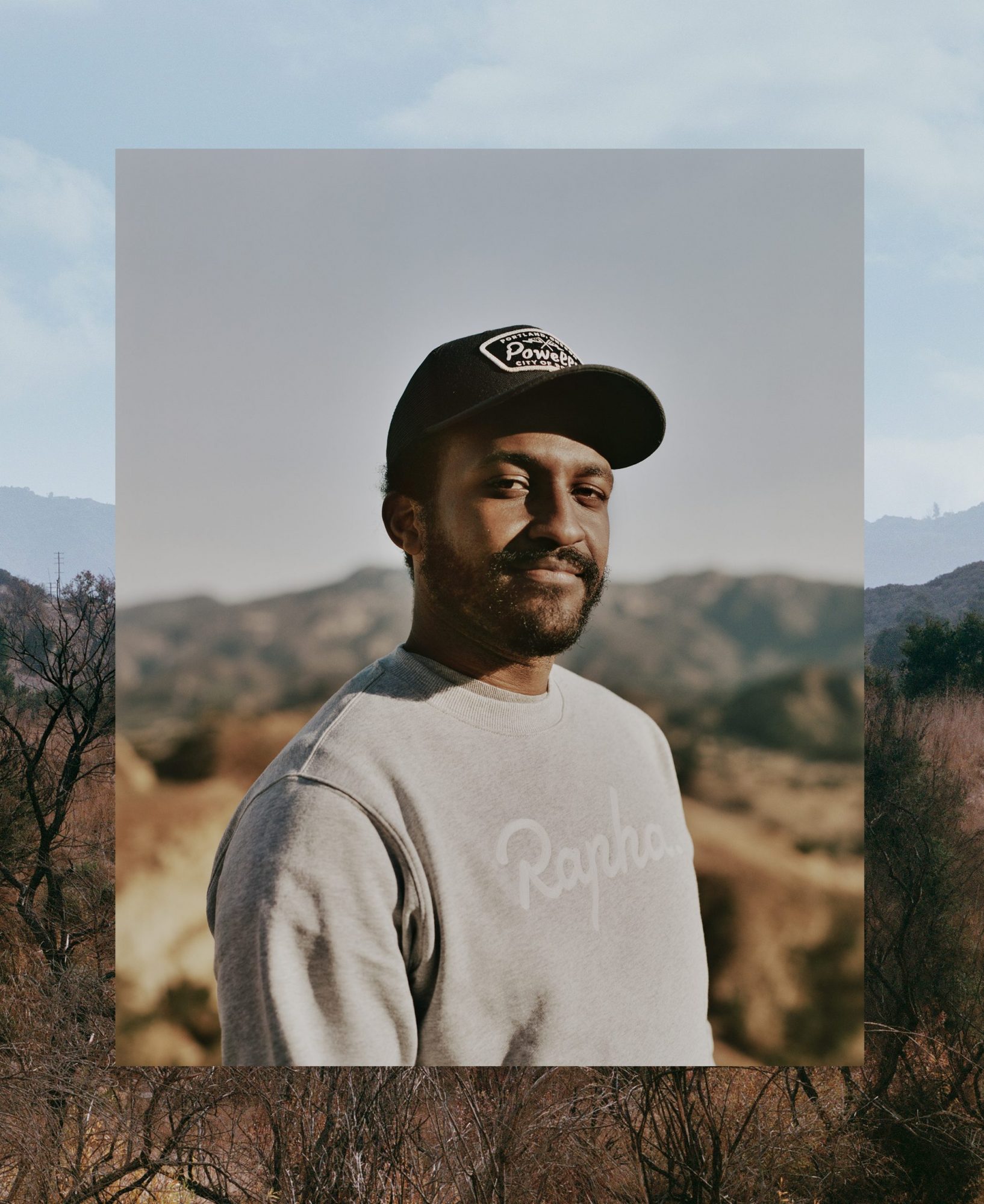 The world of cycling shootings in LA now seems to be monopolized by Dominique, and it is not because of a lack of photographers in the area. Our conversation was for her a break during a full day of editing photos from one of her latest shoots. Whether it is a set of portraits of friends on her backyard or a shooting for a relevant individual or brand in the sport, her work is in the word of mouth of the community, and the ones that have been fortunate enough to be involved in one of her projects can relate to the success she is having nowadays. 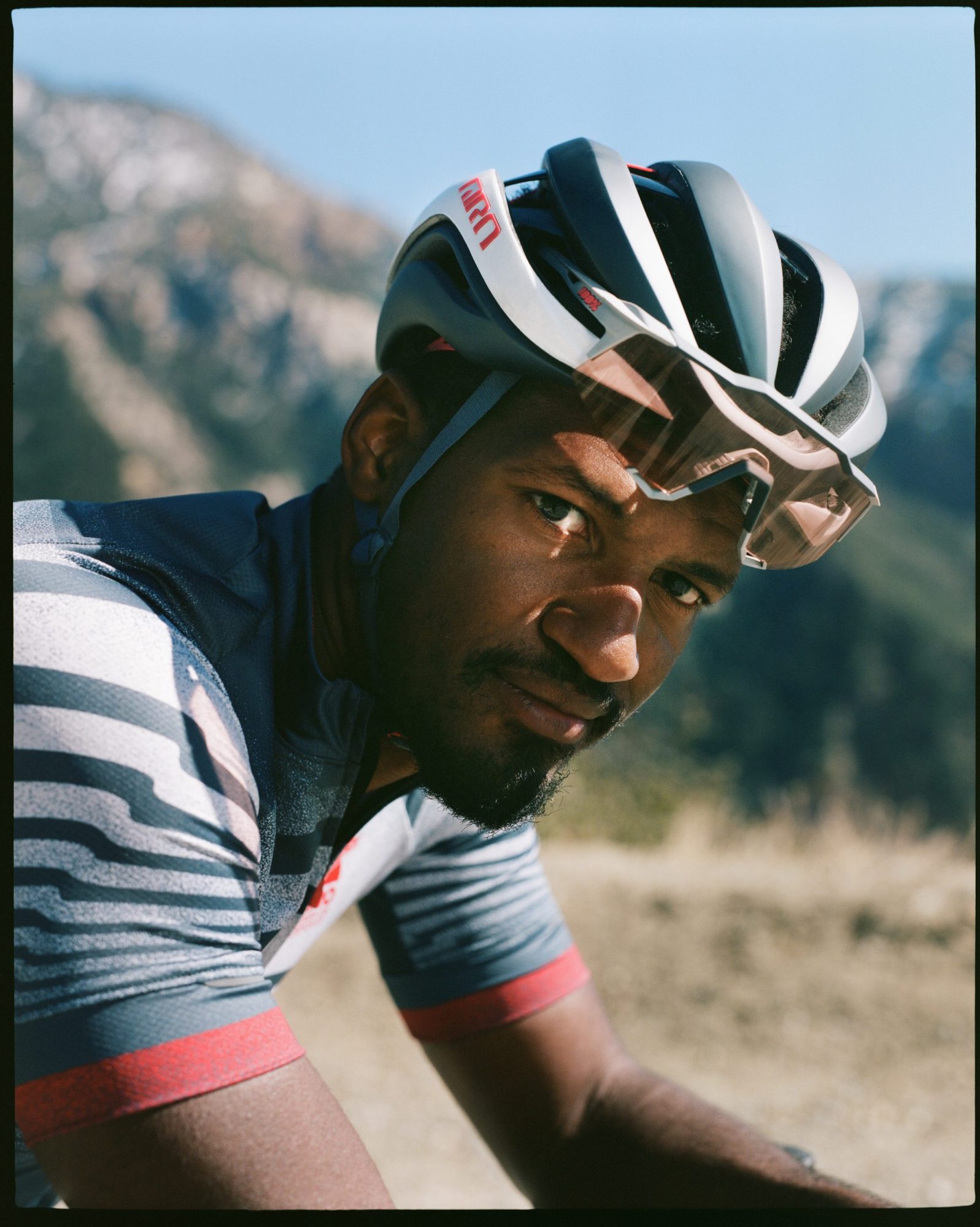 Mainly portraits, but motion shooting too

Cycling brands probably find in her an alternative and refreshing style, compared to what we are used to seeing in commercials and pro cycling photography. She follows a lot of photographers, but she considers that their content is not in line with what she wants to create. When asked about her approach to photography, she describes it as an “intimate but elevated” style.

Probably, her most relevant project in cycling so far is The Leaders of Gravel. She photographed 15 of the most influential women in the gravel scene all over the country, and complemented the images with their own quotes.

“That idea with the backdrop had been in my mind for a while. I interviewed each one of the riders, and pulled quotes from the recording. It was a big trip over three weeks, starting from LA, passing by other parts of California like San Francisco or Yosemite, then all the way to Colorado and Arizona… I paid a visit to friends and got to know amazing athletes” 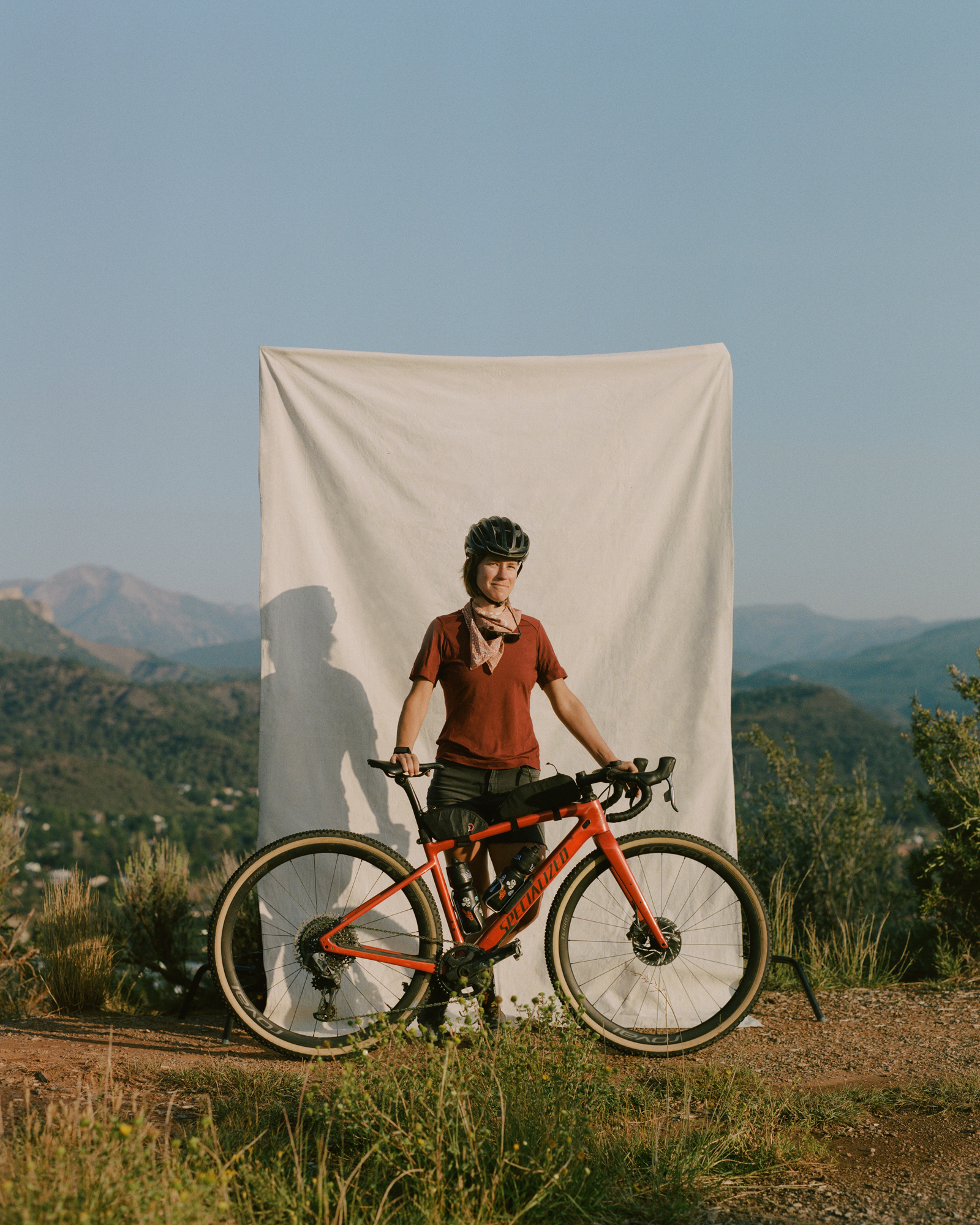 A big part of the women of the projects where photographed at SBT GRVL, a race Dominique also took part in. She had spent all summer riding her new gravel bike, and the 100 mile route was her debut in the competitive world. “In theory I was only there to do a shooting, but they opened up last minute spots and I signed up. It worked out perfectly as I ended up both photographing and racing” – she said, just before remembering how tiring that weekend was.

Although portraits are her main focus, she does motion shooting too, so we were curious to know if her approach differs based on the setting, and the camera gear used for every occasion.

“I shoot both digital and film, depending on the story I’m trying to tell. For The Leaders of Gravel I shot with a medium format film camera. There were only ten frames on a roll, and I had one roll of film per athlete. When you treat each image as a precious thing, and you approach it with a lot more intention, that definitely shows up in the resulting photo. Then, when I shoot motion, I do it with the Canon R5 mirrorless body. Using a film camera in that situation would be hindering me, because setting all the images in the same way would be holding me back”

Aware of the momentum she is in at the moment, we were wondering if Dominique already had things in the works for 2022, and as we guessed, it will be a busy year for her. Shooting a story around the Tour de France Femmes is the biggest goal, and we will see her going back and forth to Europe for different reasons. While in the States, she will work with Sarah Swallow to shoot a story around her Ruta del Jefe, and other photo stories based on influential individuals of the gravel scene.