For all Spanish cyclocross (CX) fans, Ismael Esteban is an icon to look forward to in the races with his 4 national cyclocross championship wins (2 under23 and 2 elite). Originary and presently living in Torrelavega (Spain), he is used to being on the top steps of the podium. This season he has claimed the overall win in the Spanish Cyclocross Cup, several victories in national races, and not discrete performances in the World Cup.

Currently, Ismael is racing professionally for team Aldro in the major events of the national calendar. At the same time, with the intention to promote Spanish brands, he collaborates directly with Rotor, BH, and Arrueda. For instance, he is helping Rotor in order to develop a 1x 13-speed fully hydraulic drivetrain, with which he races. Aside from CX, Isamel also races cross country (XC) professionally for the rest of the year, always fighting for the first spots. When he takes some ‘time off’, as a hobby, we can find him in some enduro competitions throughout northern Spain.

Tell us a little bit about yourself. How did your story with bikes begin?

When I was 10 I started biketrial, first with friends and then in competitions. Since I already had a license, I decided to participate in a MTB race, and I won. I had never raced in that field and the bike I had was made of 4 tubes soldered together by my father, just imagine! From that point on I started to compete in MTB, where I was with Orbea and Carlos Coloma. I never left biketrial, even though I did not compete anymore, and I had never stopped until 3 years ago, when I broke my back. When I was an under23 I switched to road. My first road race finished in a long climb, ‘subida de Gorla’, and I thought: ‘like in MTB but longer’. I finished second. I spent 5 years in road racing but I got tired and I quit. At that moment I started working in a bike shop, Bf Bikes, in which I worked for 8 years.

In all of this, when did cyclocross appear?

I started in cyclocross when I was a junior. I used it as training in the MTB off-season. Later, I kept racing as a preparation for the road season. When I started working at the bike shop I stopped. However, 5 years ago I went back to race in Elorrio. The first rider almost lapped me, and… nobody laps me. It was 3 years ago when I came back as a professional. I first raced with Ginestar-Delikia, where I could help Felipe Orts, since I was already finishing top 15 in the World Cup. Besides racing I managed the team and gave advice on technical aspects such as tire selection and pressure. The following year the team grew and I had more responsibilities. This season I was able to put a team with Aldro and I am grateful, I am ‘free’ again.

In the last year, you have been a Spanish icon in international cyclocross races. What do you think about the CX level in Spain? Do you believe a World Cup could be held here again?

It is not just Felipe who is improving, just take a look at the rest: Kevin, Feijó, Murias… In the UCI world ranking the score is given by the three best riders from each country. Right now Spain is third (after Belgium and the Netherlands), that says a lot. Some might say that in Spain there are only a few international riders, but those who compete are not nobodies. David Menut or Dieter Vanthourenhout, top 20 in the World Cup, are usuals in the races.

A course… As long as the format does not change, the most likely course is Elorrio because of its layout and atmosphere. Besides, the organizers are very motivated and every year the event improves. 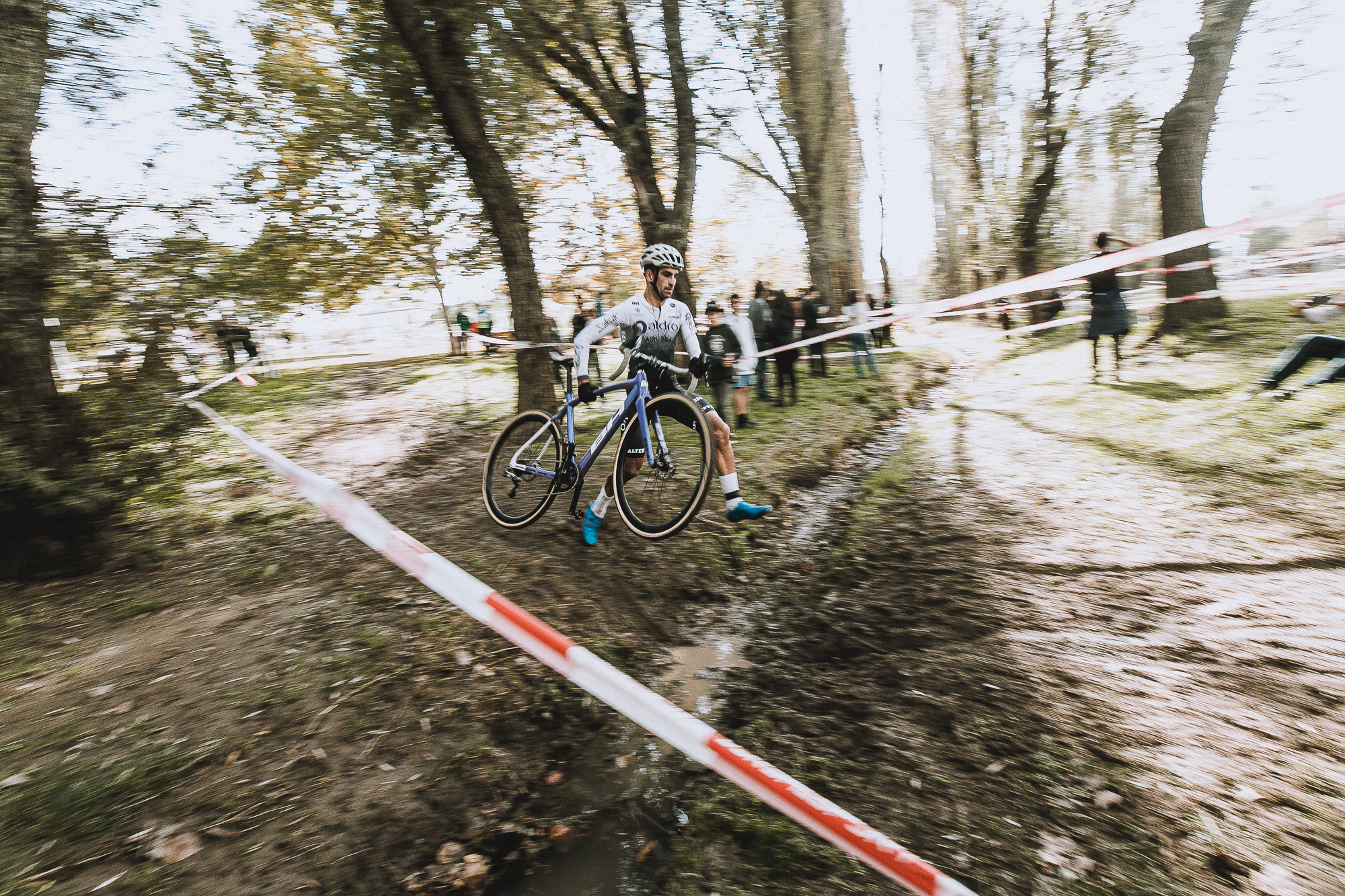 What objectives do you have for the end of the cyclocross season?

By the end of December, I participated in some World Cup races, Namur and Zolder (Belgium), but I crashed and left me feeling sore. It was time to recover and prepare for the national championship, in which I had some mechanical problems despite feeling very well. In the following days, I will participate in the last World Cups in order to get ready for the World Championship. Despite that, I do not mind missing some World Cups, as long as I get to the Worlds in good shape.

You also race in MTB. Which one of them do you prioritize?

Both of them are totally compatible. For instance, Jofre Cullell mainly races MTB, but we can also find him in some CX races. This year I decided to take it easy in the cross season. I was thinking more about the 2020 MTB season since I have the chance to go to the Olympics. I need to gather a certain amount of UCI points in order to get in, which is based on the European Championship and the World Cup. Nonetheless, I am having a great CX season, with good sensations and results. It was not my intention, but I can not complain.

One size does not fit all. How do you get ready for a race?

On a race day, I try to sleep as much as I can. I have breakfast 4 hours before the race, I set up the bikes with the mechanics and I go check the course. One or two laps, depending on whether there is a lot of mud. Then it is time to choose the tires and pressure. I rest for a while and I pin the numbers. 50 minutes before the race start I get dressed and warm up gradually. When there are just 15 minutes left I put on the skinsuit and I get ready for the whistle-blowing.

I have tons of fixations… something that apparently worked out and I repeat over and over. For instance, before warming up I circle the tent with the bike I am going to race with, which I then hang up and never use to warm up. It might be useless, but I do it.

In general terms, I have the same coach from when I was a junior, Mikel Zabala. He was the first one I addressed when I decided to become a professional. Sincerely, I would not change him for the world. Nutritionwise, I eat within what seems logical. For instance, I am not going to stuff myself with pastry. I eat clean and healthy: vegetables, beans, meat, fish… a bit of everything. I am also lucky since I do not gain weight easily.

Cyclocross is somehow special. What does it represent to you?

What I enjoy the most is being among friends (the mechanics and riders). On Friday, we wake up early and go on a trip to the course. Besides racing and winning, going somewhere for a good meal and having some laughs when the race finishes. Everyone is friendly and the atmosphere is more relaxed than that of MTB or road racing. For example, on the races I am usually with Felipe, later we race as enemies but, at the end of the race, everything is smiles and hugs. Or with Kevin, with whom I train every week and we go out for a coffee, it is the same. It is race time, we fight, and then it is over.

A special race, a sweet memory.

My most important victory was the Spanish Championship in Legazpi two years ago. It had been 6 months from when I had the accident in which I broke two vertebrae. I was in a wheelchair for a while. During the CX season, I had to do all the job I did not do during the summer, spending long hours on the bike. Felipe was training for one hour and a half, whereas it was four for me. I was racing the World Cup in complete fatigue. You know you are good and fast, but the body does not respond. That was tough. I told my friends I had a hidden card, but nobody believed me. Before the national championship, I took it easy, certainly a good idea. I had had a bad year between the injury, the training loads and many sacrifices. But in the end, it was worth it.

Tell us an anecdote.

The only thing that scares me in CX is hopping the barriers at full speed. When you are doing it slowly you first hit it with the front wheel and then the rear. Whereas going at full speed can result in an epic crash. Three years ago in the Fiuggi World Cup (Italy), Van der Haar and I had a tense fight. The Belgian and Dutch riders are not used to being challenged by a Spanish, they do not like it and complain about it. We rode together for a whole lap, fighting on every single corner, till the barriers arrived. The course was extremely muddy and I was the only one hopping them. As I jumped, I left him behind. Spectators were astonished: ‘where is this guy coming from?’. 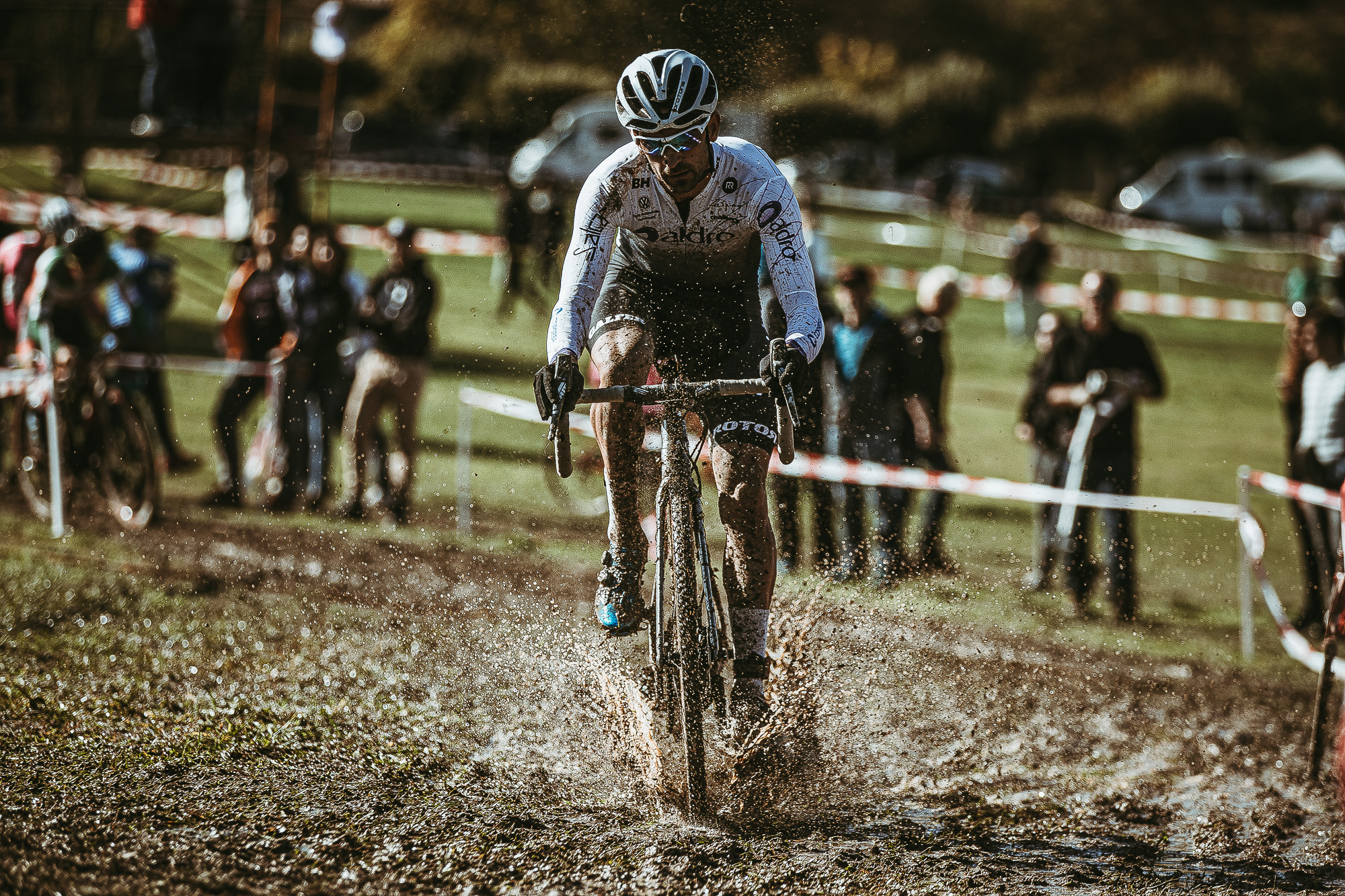 You are from Cantabria (Spain). Would you recommend visiting it from a cyclotourist point of view?

In Cantabria, everything is worth visiting, but it is not typical Benidorm, the mountains are for real here. For a road bike, I would suggest climbing Collado de Asón, a valley place with woods, creeks, peaks… a very special place. And for those who like MTB, there is no better place than Costa Quebrada along the sea between Santander and Liencres. I have ridden there a lot, even on the CX bike, even though it can get technical.

Two things that represent you: ‘Dale brea’ and Bolo.

‘Dale brea’ (literally ‘apply some tar’, or an exclamation to ‘push it’ or ‘go harder’) is something I have said all my life. It was something we said between friends, yet it persisted in time and now it identifies me. While you are racing people shout out ‘Dale brea!’ and you immediately feel their energy. I am proud of it.

Bolo is my puggy. He has traveled with us in the RV to all the races we have been, even to Belgium. Despite that, people believe he is Felipe’s because he can not help taking pictures of him. I believe he does that for hooking up. Hahaha!

Watching a Dutch rider in the front of a race…