After some rest days, even though he went on a short bike trip around le Massif Central (France) one day after being back home, last week we had the chance to chat a little bit with Sofiane Sehili. This year could not have started better for him, winning the first edition of the Atlas Mountain Race (AMR) organized by PEdALED, the ultimate ultra-cycling competition. This was not his first long-distance race as he had already won the Inca Divide and Italy Divide last year. Aside from racing, he works as a bicycle courier in Paris, where he was born and raised. He describes himself as a bike enthusiast who loves traveling around the world, visiting new countries and discovering different cultures. So, participating in long-distance bike races seems like a pretty good deal to him. 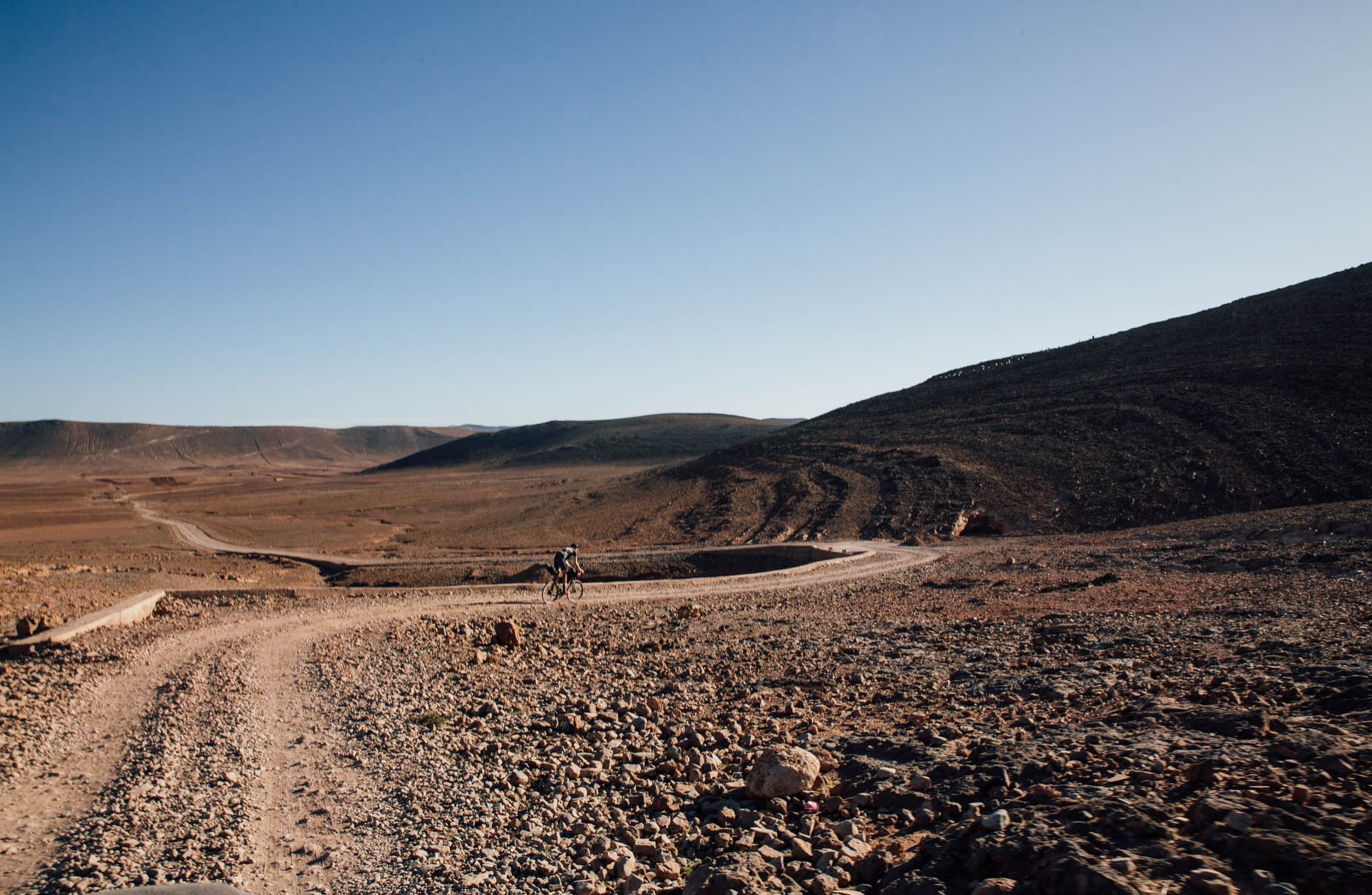 How did you start in long-distance cycling and ultra-cycling races?

I started long-distance bike touring in 2010 when I did a trip along Asia. The following year I went back there again, and when I returned to Paris I could not keep on working in an office. I had discovered a real passion for cycling and the best solution for me was to get paid for it by being a messenger. In 2014 I went to ride the Tour Divide, simply the route, since I had no idea a race existed. I was a bike messenger on a salary, so I had to take my whole vacation, around 30 days. That’s what it took to finish it, which is considered a time within the race. It was hard because it was the first time for me on unpaved roads. I was slower than usual and at first, I hated it, but then I fell in love. When I found out about the race, I checked my times, and I realized I was fast. So, next year I decided to register, but I got injured before going and I had to pull out. In 2016 I enrolled again. I made a lot of mistakes (like riding 42c on a gravel bike) but I learned a lot and I managed to finish 3rd in 16 days, being the first rookie of the year. At that moment I found the motivation to compete in this sport and to register in other races, just to catch the guys in front of me, finishing and being on the podium.

What pushed you to register for the Atlas Mountain Race?

I had a really good year in 2019, winning Italy Divide and Inca Divide. I also participated in the Tour Divide, but I dropped out because I did not feel like it was the year to do it. In spite of that, it was the first time everything came together: legs were fine, no mechanicals or injuries, the weather was good, I had a chance to be really strong and to win twice that year.

Atlas was the first race of the year. I knew James Hayden would be there. In the Italy Divide, I had a joint win with him. Also, in Inca Divide, my chaser (Rodney Sonnco) had mechanical problems. In both races something was missing, I had won, but I was not able to prove I was the best. I wanted to win in a fair game because of my merits: riding faster and longer, choosing the right gear or sleeping less. So AMR seemed the right place to do it. I was not sure about going but I was motivated about racing and I kind of got hooked on the feeling of winning. It also looked like a nice race: the weather, the landscape, the mountains or the desert. And Morocco was a country I had never been to.

In terms of training, I do not do anything specific. By being a bike courier you already spend lots of hours on the bike, I can easily ride 400 km a week. Aside from that, I love bike-packing; it might not be racing but you learn a lot as well.

For these races, the track is something that is already established. I believe that in a race the route should be set; I have never ridden TransContinental, for example. But I always try to check the route before going, and Komoot is a great tool. Besides, I use it a lot for my bike-packing adventures.

Regarding material, I brought some food from home that I like because I knew food was going to be an issue. For this race, there was some required stuff that you needed to carry such as a sleeping bag, gloves, rain jacket or emergency blanket. I also checked the weather in the region and carried the essential clothes. I knew nights were going to be chilly. I try to pack light and compact, and always carry something extra just in case.

What can you tell us about your setup?

I used the same bike from the last races. I use a mountain bike with a rigid fork because I want to ride in a comfortable position. I can also fit wide tires in my Hunt Wheels, which rolled amazingly. I use a flat bar for the descents and aero bars for the long gravel sections. If you can do it on a gravel bike you can also do it on an MTB. Also, the margins in these kinds of races are several hours, so very specific details are not going to make great differences. For this race, I switched from an 11×36 to 11×42 cassette, and it felt really nice in the climbs because I could just spin. Then I fitted all my gear in Apidura bags so that I had the basics accessible and my clothes well stored.

How did the race go?

I obviously did not sleep much. Christian Meier and I were tête-à-tête during the beginning of the race. At one point in the race I passed Christian because we both had stopped to resupply, but I was faster than him. He then passed me back, I tried to follow his pace, but during that time everything hurt. I could not do it. I stopped and went at my own pace, a pace I can go on forever and just enjoy the landscape and the sunny weather. From that point on, nothing was hurting anymore. In spite of Christian being stronger than me, he comes from professional bike racing, and I do not know his experience in long-distance races. In pro-cycling you suffer a lot, but through bike touring you learn how to spend long hours on the saddle and, for example, avoid saddle soreness. So the race was just about keeping my own pace and pedaling without much sleep.

What was your strategy throughout the race?

I keep my mind on the goal, focused on pedaling to get to the finish first. My style is not to be fast but consistent. At my own pace, I know that I can go for many hours without fainting until I find the next resupply. I am not stopping for a comfortable meal, I eat on the bike. I resupply fast by taking some water, soda or groceries and stuffing them in the bike. The only time I sit down is on my saddle or when sleeping, but only when necessary. I listen to rock and hardcore metal music while pedaling, which is an important part, even though I am not always paying attention to it. It helps me to stay awake in the dark and to keep motivated. In the sunlight, I just look at the cycling computer or the landscape. 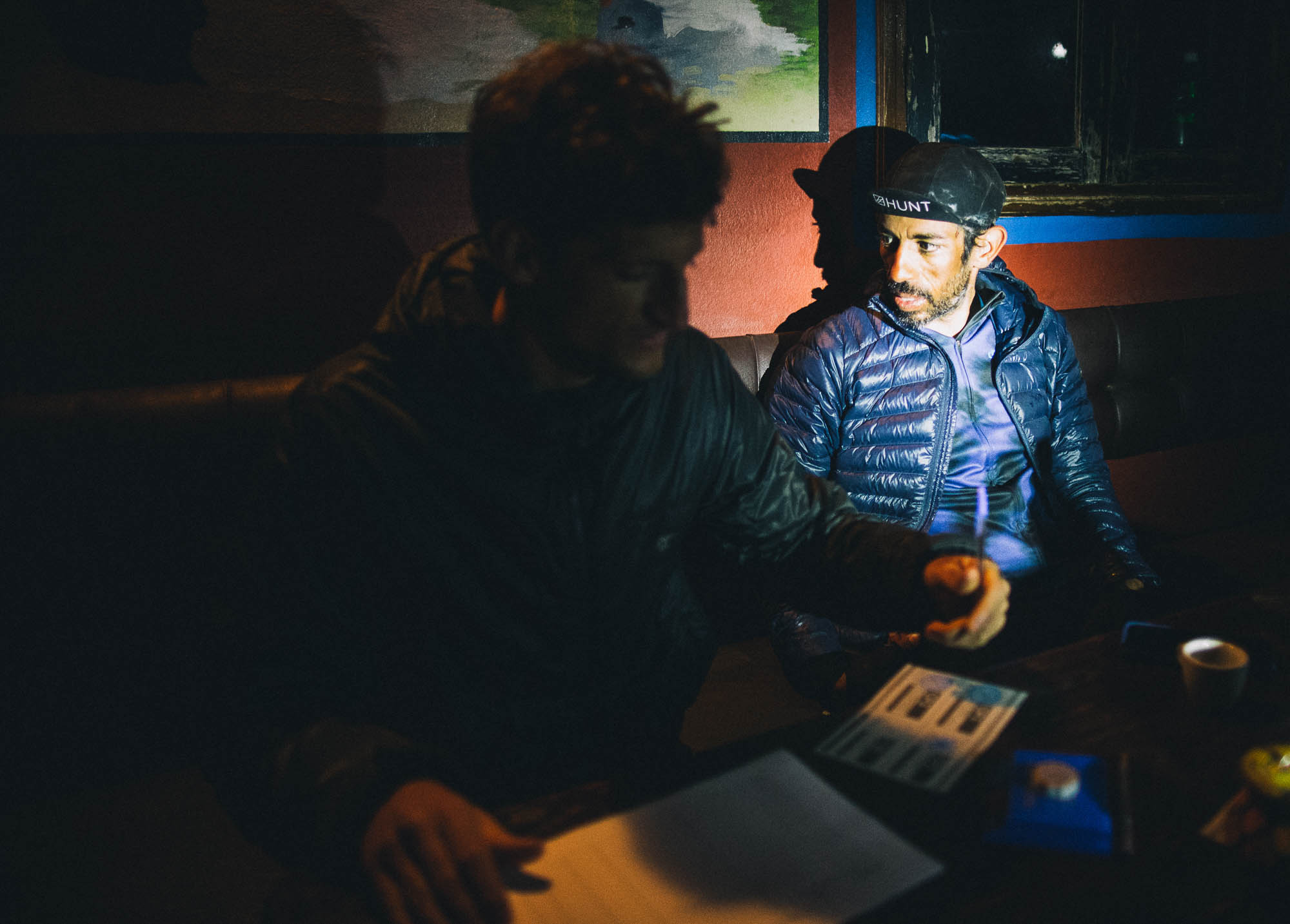 Any setbacks during the race?

The food was pretty challenging in Morocco. With only a little shop in each village. The problem was to find salty food, they had a lot of snacks, cookies, cakes, and sweets. I cannot run just on that. I crave salty food and nuts, which I was not able to find. I ended up eating a sort of creamy cheese. So bread and cheese were my go-to salty food in Morocco.

If I participated again, I would have definitely brought a suspension fork and dropped the aero bars. Also, I did not use many of the mandatory objects such as the sleeping bag or rain jacket. I thought it was going to get around 0 ºC at night, so I brought lots of clothes that I did not need. On the first night I put everything on, it was nice to wear, but I was losing time dressing up every time. So I decided to take it off and only use the down jacket for the 2nd and 3rd night.

You were in the lead for a while. What were your thoughts when you crossed the finish line?

When you manage to ride 1,000 km without a single problem, you know that in the last 100 km nothing is going to happen. Even if it happens, I knew I had more than 3 hours to fix it. From the 3rd checkpoint on I felt I was going to win, but still, you have to get the job done and finish the line. For instance, the last 5 km I was pushing my bike through the sand when I saw the lights of the finish. As I crossed the line I felt an immense joy. It was finally over. I could relax, have a meal, take a shower and lay on a bed. Besides, a lot of people are going to be proud of you. I had a mission and I accomplished it. This race felt like I won on my own terms, without taking advantage of other people’s setbacks. I felt good, and I was just superior.

You have gotten far, but I guess you will not stop now. What’s next?

I would like to go on a bike-packing trip and check out Montañas Vacías in Spain (700 km and 13.000 m) next month. It is a remote place, with just a few villages. I am not sure about races in the spring, but I will try to participate at least in a short race. Also, there is a very good chance that I will be back in the US in June for the Tour Divide. Last year I was leading before dropping out, in front of really big names such as Josh Kato, Lael Wilcox, Josh Ibbett or Evan Deutsch. I was riding ahead of the race record until we got some serious snow in Colorado. So I would like to go back and set a new record if the conditions are good.

On August 27th, Boru McCullagh decided to leave London, his…