It is very likely that our desire to innovate and create different projects can be classified in some corner of the planet as an incurable disease, but we do not care. We love to deviate from the established path, take our own direction, take risks, push hard, and give it all. For these and many other reasons, we decided to bring into the light the project Touch and Go.

Nowadays, professional cyclists spend more and more time away from home either traveling for races or participating in training camps with their teams. However, many of us have obligations that prevent us from doing so. Despite this, we believe it is still possible to ride outside our usual area through express trips, and this project is a clear example of this.

As a starting point for Touch and Go, we proposed the idea of ​​going to Mallorca to ride a route during a single day. We took a night ferry, woke up on the island the next day, traveled 200 km, and returned that same night by boat.

It sounds as crazy as it is attractive, and the truth is that in addition to being a great way to visit the island, it was a good way to share the experience with new people and add another unforgettable adventure to our memory.

Despite being the first time we organized something like this and having just enough time to carry it out, we are more than satisfied with the incredible result.

We formed a group of 20 people and set sail on a Saturday night from the port of Barcelona to Palma de Mallorca. The weather forecast was not good at all. In fact, a storm was stalking the island and it had not stopped raining all week. Despite this, we decided to move on.

With one foot in Palma, everything looked different. The day received us partially cloudy but without any rain at the time. We started in the direction of Alaró, where the guys from Cycling Planet were waiting for us for a good breakfast and a tasty coffee.

From there, we entered the Serra de Tramuntana through the Coll de Sóller (6.8 km with an average of 4.6%). At the beginning of the port, a fine rain began to fall that soon became more abundant and after three turns it soaked us from top to bottom. We reached the top without stopping and rode down to the other side, where we would regroup somewhere with at least a roof.

At the first gas station we found we stopped to get the corresponding outfit for a watery day like the one we were facing. We have to say that, although we were very aware of the high probability of getting wet, when we got off the ferry and saw the weather forecast had improved we had high hopes of saving the day and finishing the expedition completely dry. Obviously, we were wrong.

Once equipped and with hardly any rain, we began the ascent to Puig Major, the highest peak in the Balearic Islands (1,445 m). It has about 14 km at 6% and, despite not being particularly hard, it is an ascent that, if completed at a high pace, ends up being demanding. We really enjoyed it and as we got closer to the top the first attacks of the day took place among the strongest group members. 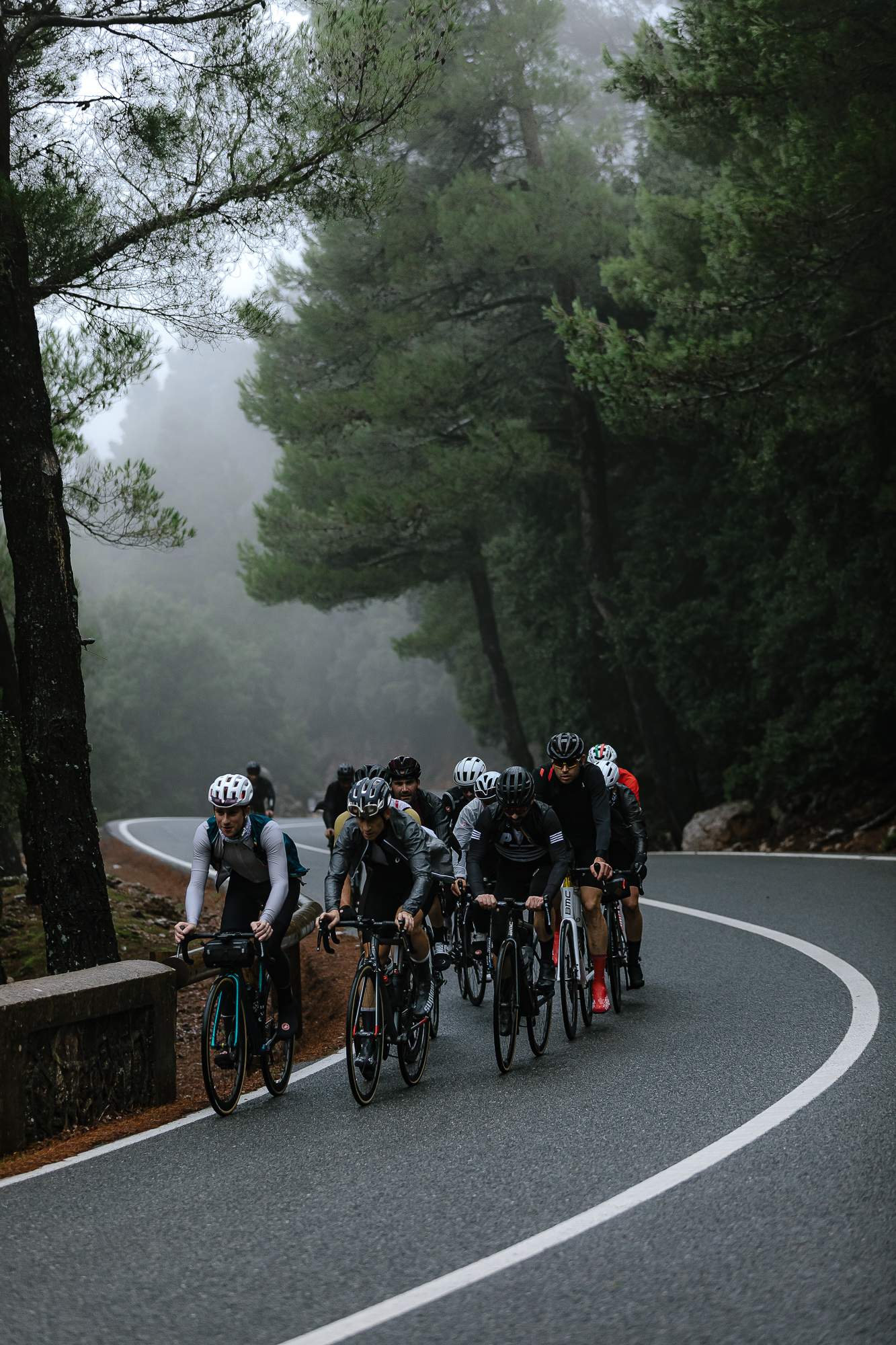 After regrouping at the top, we opted to make a stop for lunch before facing another of the great highlights of the day: Sa Calobra. We had covered about 80 km and the rain gave us a second assault. We took refuge under a tunnel with beautiful views of the Gorg Blau and with chills caused by the water and the cold we ate an improvised pasta dish and recovered some strength to face the second part of the route.

We would like to highlight the group that, at all times and despite the water that came and went, always maintained a great attitude and positivism. Laughter, camaraderie, and joking were not lacking at any time, which made things much easier. 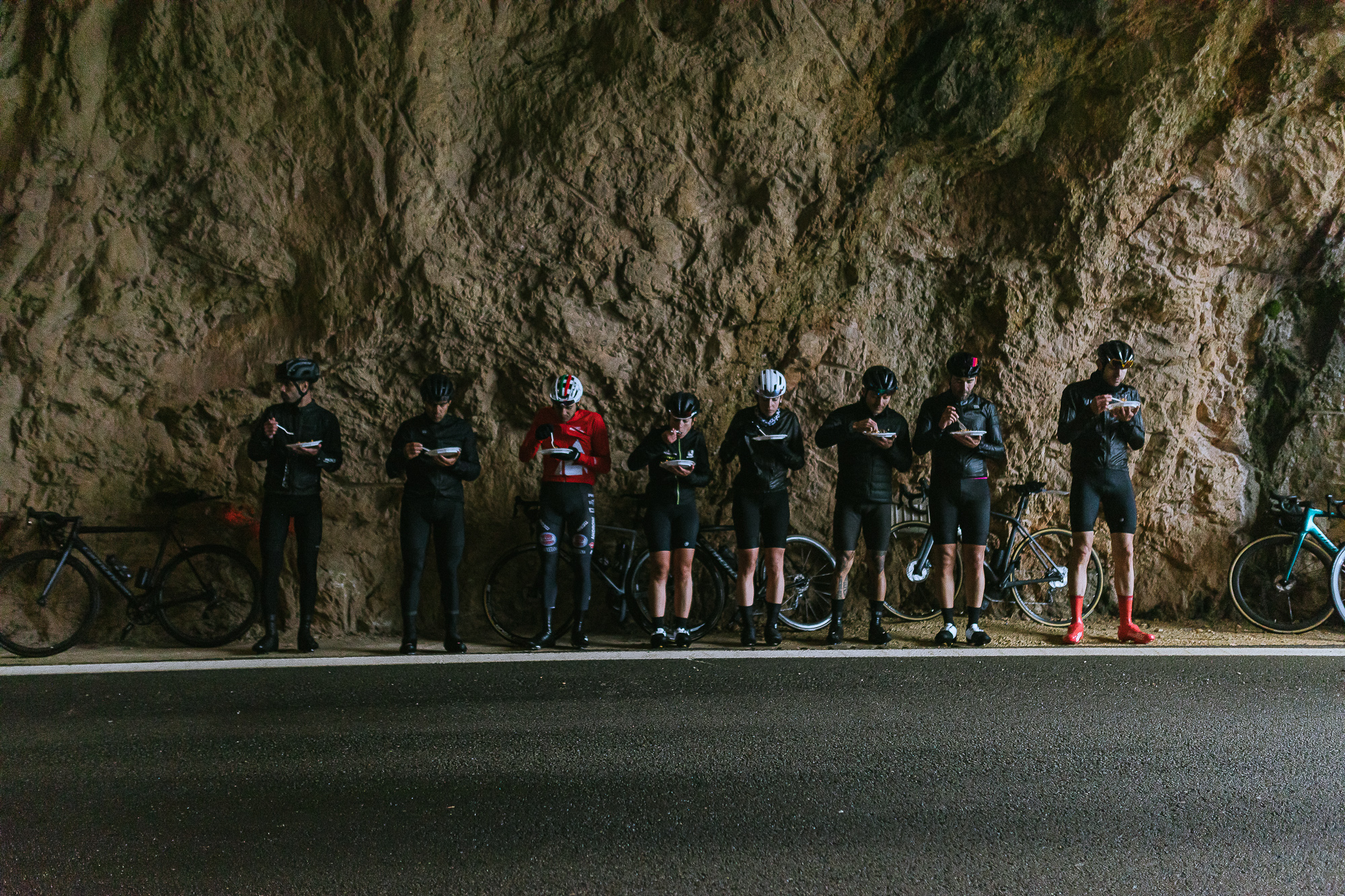 We stroke the pedals again and set off towards one of the most beautiful roads in the world. The day was not the one we had mentally imagined descending that road, but once there, nothing was going to prevent us from enjoying it. We carefully went down turn by turn, hypnotized by the beauty of the place and focusing on the road to save unnecessary crashes.

Once at sea level, in Sa Calobra, we did a quick count to ensure that we were all there and we began to undo the road to face the 10.5 km at 6.7% average elevation gain that awaited us. Luckily, the rain gave us a break.

It was around 3:30 p.m. and in our heads, it was almost done. We had crowned Sa Calobra, the third ascent of a total of four, and we were getting ready to head to Pollença, to the northwest of the island. From there we would decide who would face the last part of the route and who would choose to wait in Alcúdia. 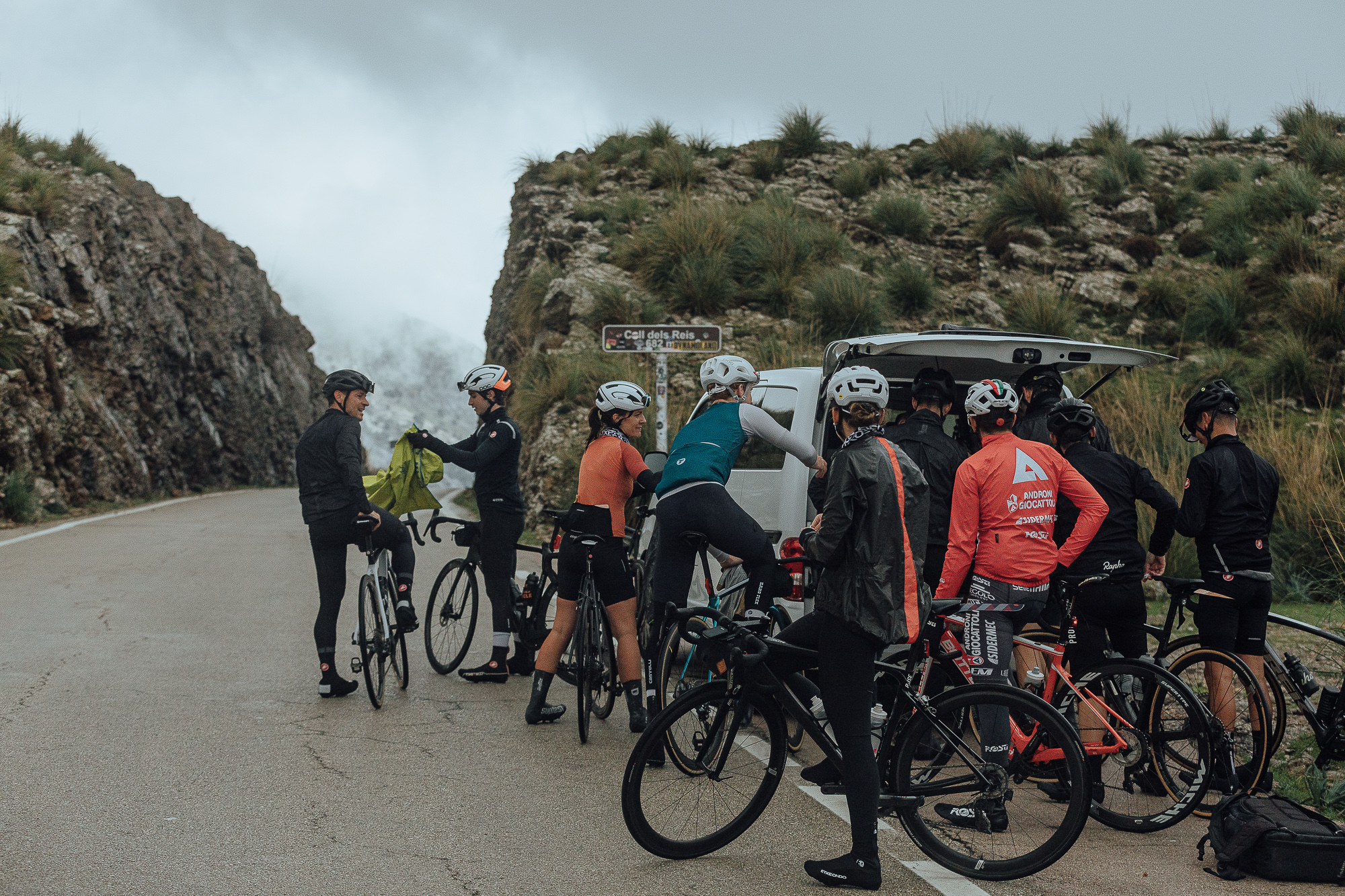 We had about an hour of daylight left, and we had just enough time to reach Cap de Formentor before sunset. We divided the group and resumed the route. From Pollença there are about 18 km and 550 m of accumulated positive gain for the outward journey, and to return you have to do it in the same way. Fatigue was present and food reserves were already running low. We decided to set a pace that was good for everyone to always ride in a single group. The road, once again, is spectacular and the views as you approach the lighthouse are magical. If you add to that that it was sunset and the sky had cleared, we could not think of a better place to be at that moment.

With 7 km to go to reach our goal, we came across a barrier and a sign of a closed road. We had our doubts, but we were so close that we finally chose to venture out and risk being sanctioned. Minutes later, we were smiling and happy at the northernmost point of the island of Mallorca, Cap de Formentor. 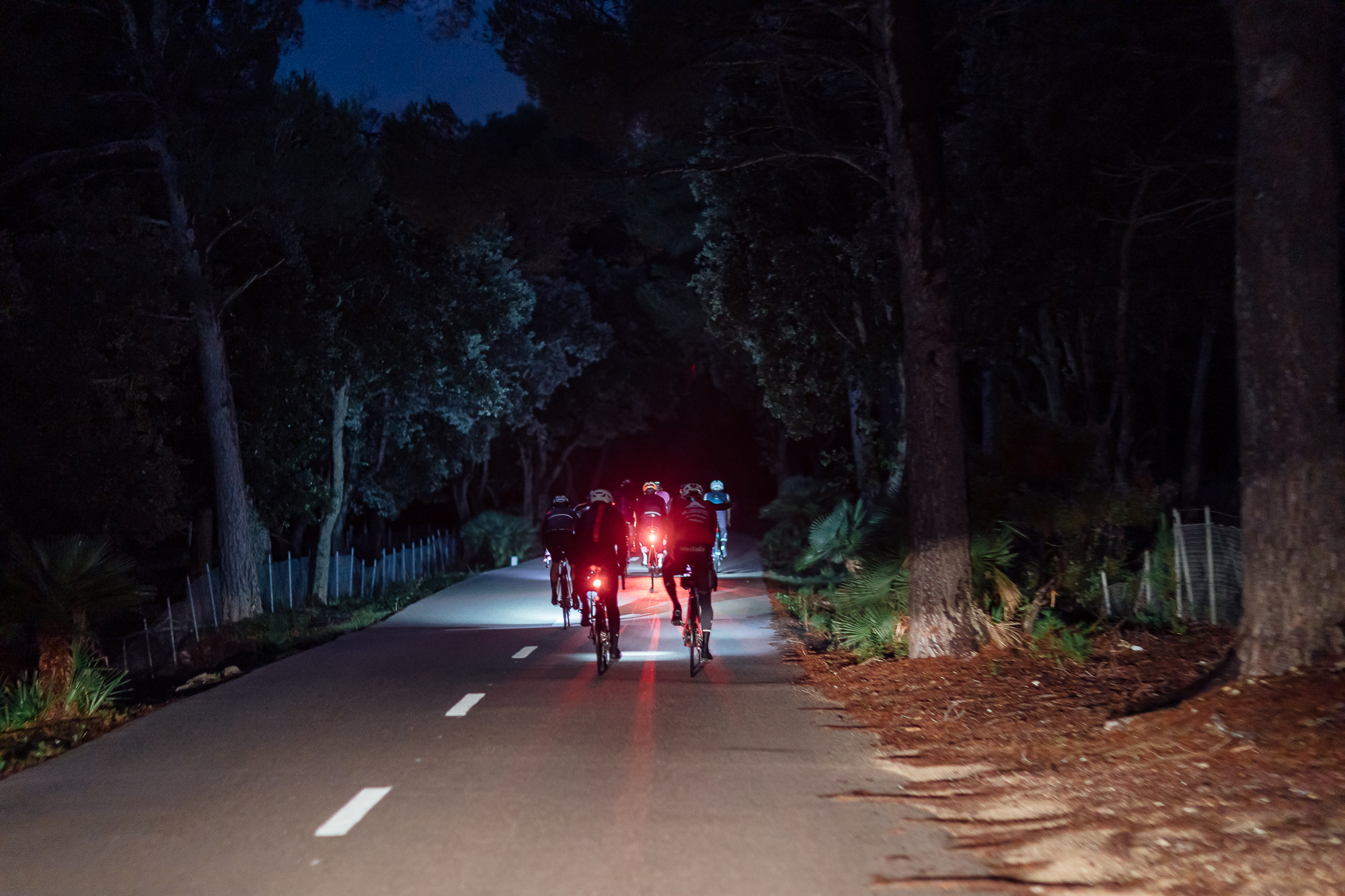 We still had to undo the road and ride the last stretch to Alcúdia accompanied by the darkness of the night and the only light from our lamps. The positive part was that we had succeeded and that in less than an hour we would all be together with dry clothes, without being cold, and having pizza for dinner. Nothing better to put the finishing touch to an unforgettable day surrounded by wonderful people.

It is very likely that our desire to innovate and…

Last weekend a new edition of The Traka took place…