One of the beauties of cycling is the freedom it provides. Whether you just move around your city and discover hidden spots, or you part away to distant and remote lands, you can always get out of your comfort zone and into the unknown. This was the idea the crew from Upside Down had in mind; adventuring themselves in places not so known for cycling but with big potential. Besides, with the growing number of gravel enthusiasts, choosing this discipline made the number of possibilities increase exponentially. Eastern Europe is the perfect playground for that, with an endless network of interconnected gravel roads and trails away from dense cities to explore and get lost in nature. With this, the concept of an organized trip around Serbia was born: the Serbia Upside Down. 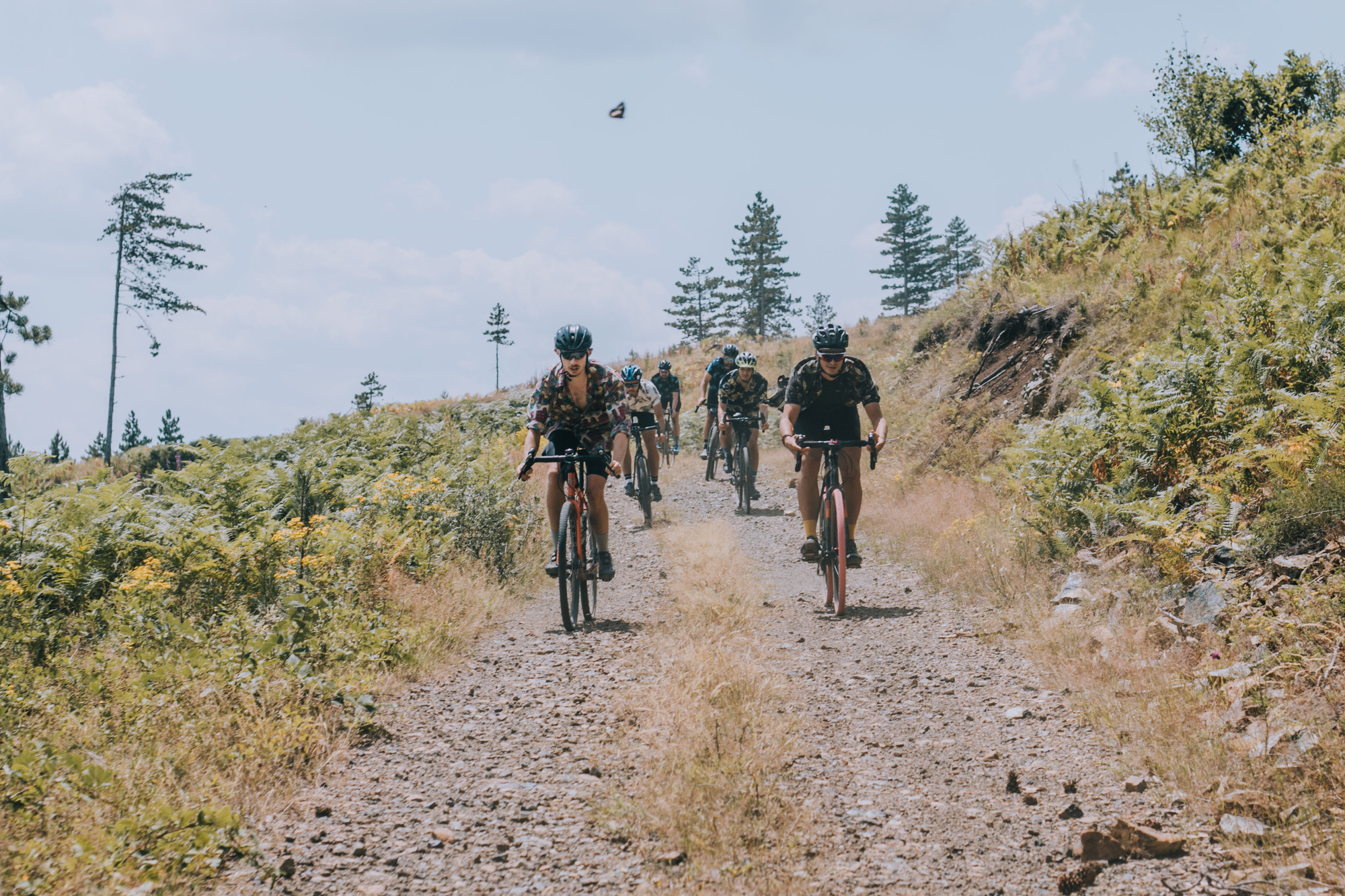 The idea of the project comes from thinking about what Serbia represents to people around the globe. The organizers felt that Serbian culture, heritage, people, and values remain somehow hidden and unknown. In general, Serbia is not a touristy destination, being the capital Belgrade the most visited place, makes that all tiny villages and rural roads are somewhat remote. With this, they found the opportunity to reveal all the secrets that can only be reached by bike, but not any. Gravel bikes allow connecting chains of mountain peaks and picturesque villages through curvy off-road paths, green forests, and golden fields. In this way, a trip with people from different cultures was organized to show the hidden gem and alternative destination that Serbia can be.

The Serbia Upside Down 2021 was the story of eight adventurers from Serbia and Germany who, together, traversed the western mountain ranges of Serbia in order to reveal and approach the amazing landscapes to the world. After last year’s experience, which was drastically affected by the pandemic and consisted of two separated groups of four people each in either Germany or Serbia, this year they could all gather and do the trip together. Therefore, they were able to discover the region, learn about each other, exchange their heritage and culture, and share the whole experience to finally show and send a different image from the eyes of both nations.

In terms of numbers, the trip consisted of a five-day adventure across signature mountains of Western Serbia, covering 500 km and 11.000 meters of elevation gain through gravel roads and some less-traveled tarmac sections for linking paths (the Komoot route can be found here). In this way, they immersed themselves in the beauty of the region, not bothered by cars nor crowded streets, to let their mind and soul fully enjoy the experience.

On the 20th of July, the eight adventurers started the trip from Valjevo, all wondering if 40 mm wide tires would be enough or if the 11/42 gearing was sufficient. The day was cold, foggy, and rainy, but the hopes were high. After the morning ritual, they departed for 10 hours on a bike riding on unknown paths, unstable weather, and untested tracks. The rainy morning left a scenic surrounding, with dark grey, green, and intense blue colors. After a 15 km long ascent, they reached the Podrinje gate viewpoint, a moment of satisfaction, and a turning point for the German riders as they realized that the trip was something special and authentic. 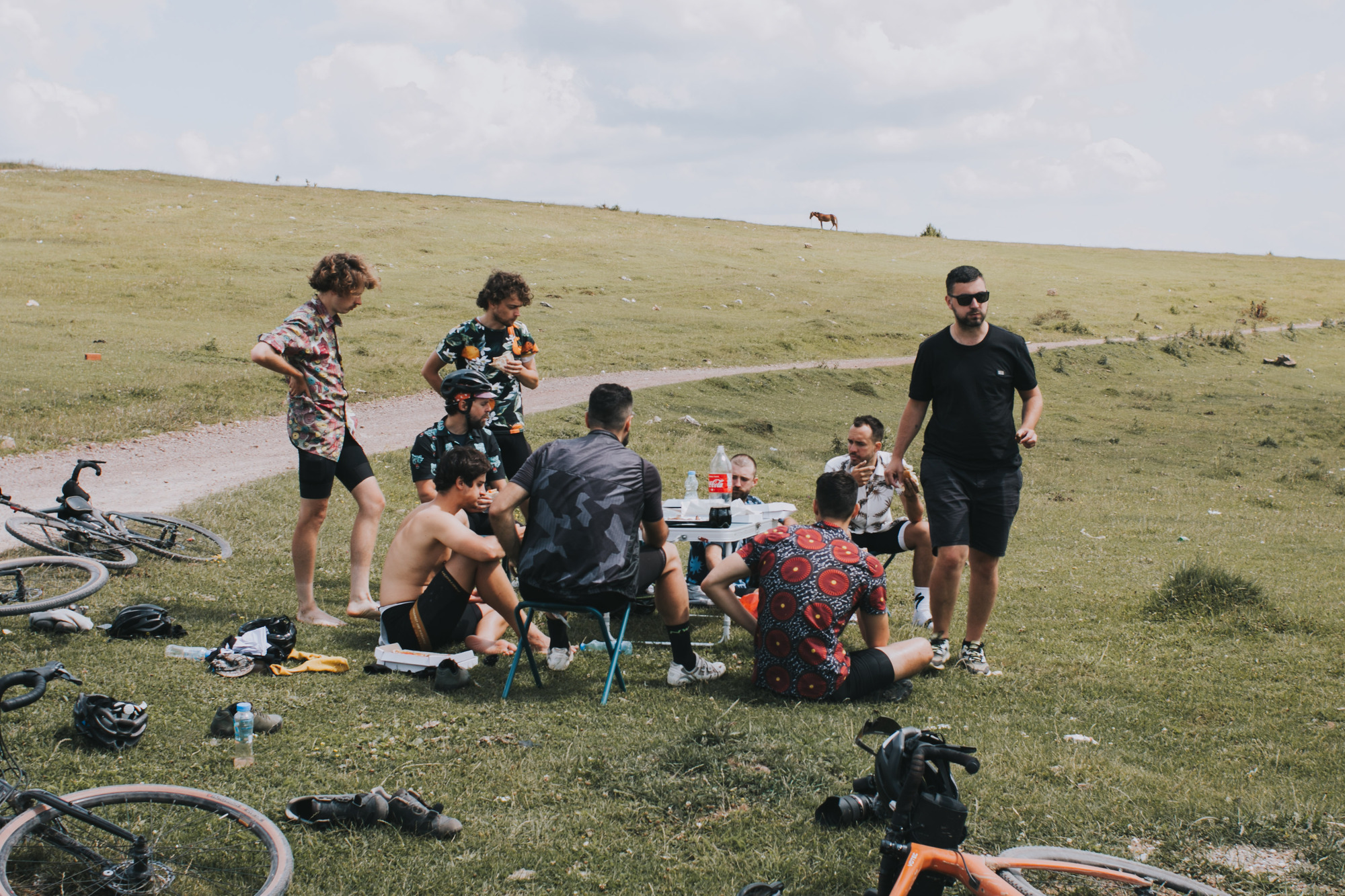 The whole trip was a real immersion into Serbia. The designed track resulted in unexpected gems. They would average 100 km and 2.200 m per day but the accumulated fatigue did not bother the group. They conquered the Tara mountain, rode side-by-side the Zaovine lake, passed through gravel paths that turned into MTB trails, and isolated themselves between hills and forests. An undescriptive moment was when they rode through the Zlatibor mountain, as they crossed a golden landscape of long dry grass hills, feeling as they were in the Argentinian pampa or Kansas. Some eventual tarmac allowed them to spin their legs, but not for long, as they had to cross some streams before arriving at Zlastarsko lake where, bibs down, they soaked for a while. A complete feeling of freedom surrounded the atmosphere, with no schedule, organized stops, or average speed.

Along the Uvac valley, they enjoyed a winding road and a moment of absorbing nature at its purest. To their surprise, a local ex-pro MTB rider joined them on the last day and suggested some changes on the route to Golija mountain, reaching the highest point of the route at 1.748 m. As the participants describe it, the last kilometers that signaled the end of their entire Serbia Upside Down journey were very sentimental. They were impressed and emotional but still pumped with adrenaline and happiness as they reached Kopaonik. Some technical problems like uncooperating derailleurs, brake pads, or flat tires over the trip were nothing compared to the route they had ridden together, counting kilometers, good moments, laughs, and making an unbreakable bond. 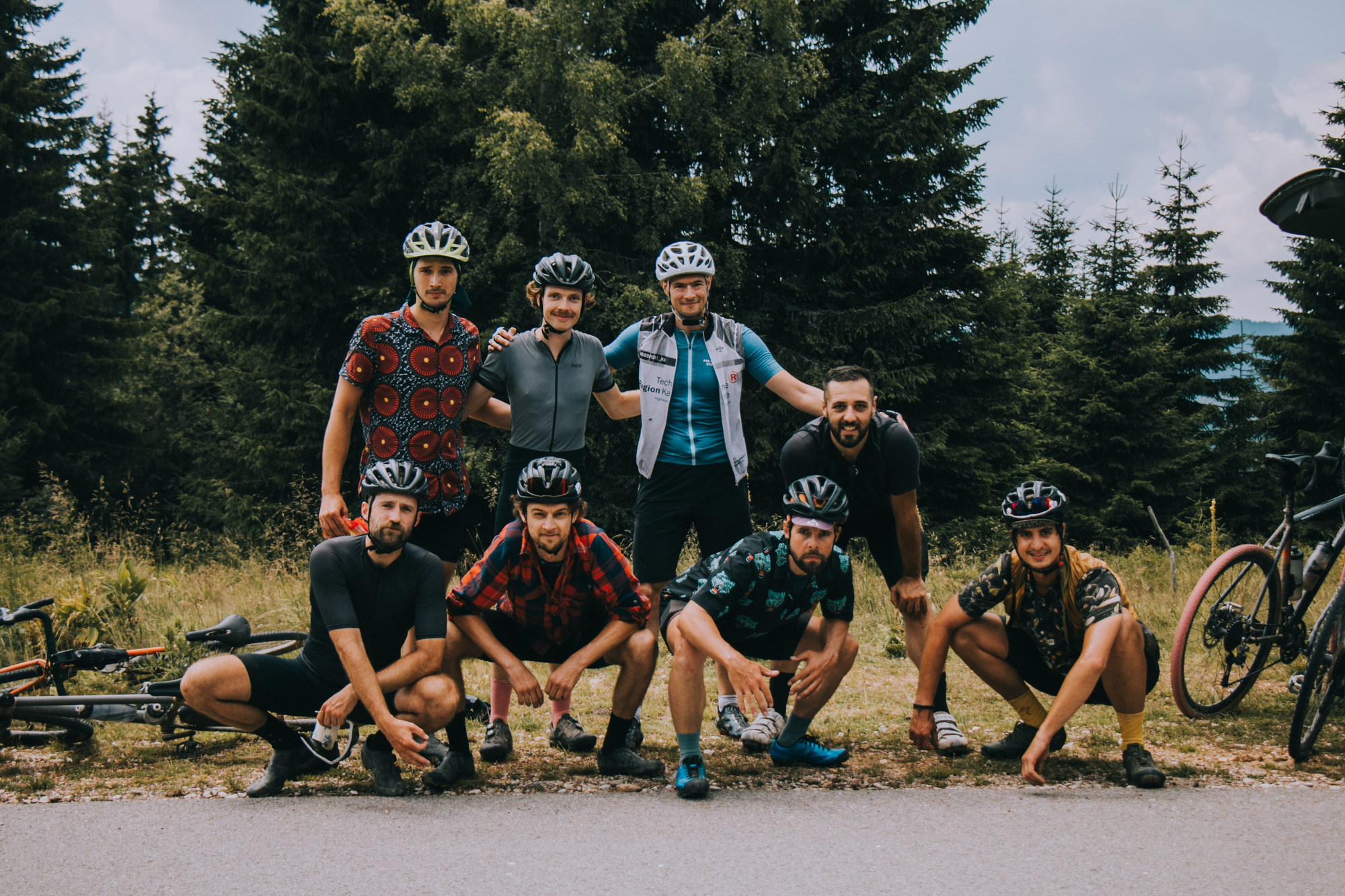 More than a bike ride

Aside from riding together the group also spent the rest of the time, night, and meals together, which translates into more moments of bonding and friendship. At night they usually gathered at mountain lodges or little cottages, finding a nice moment to relax; though one night part of the group had to sleep outside in tents and it heavily rained making it a bit uncomfortable.

Food is always a big part of a nation’s culture, and the trip was a clear example. They could enjoy some local specialties like the over-baked bun filled with egg and cheese cooked in a stone oven (komplet lepinja), roasted lamb under the bell (jagnjetina ispod sača), stuffed cabbage rolls, or the cheese and minced-meat pie (burek), which is Lael Wilcox’s favorite Balkan dish. Moreover, they could not miss Serbia’s typical drink rakia, their favorite moonshine that helped ease the spirits after the ride. Besides preparing meals, as they rode through forests, they traversed raspberry tries, directly eating from mother nature and connecting with it.

After this successful event, the guys from Upside Down are already preparing next year’s edition that will take place between July 13-17, 2022.

On August 27th, Boru McCullagh decided to leave London, his…