During this lockdown period, spending the day watching the television has become something usual and free of guilt. A lot of us are not able to remove cycling from our mind, and any broadcast related to our favorite sport justifies the number of hours in front of the screen. Virtual races, documentaries about life inside and outside the cycling bubble… Some TV channels are also showing stages and epic achievements from the past with the intention of wakening a nostalgia feeling inside us, and they have truly succeeded.

It is hard to believe the amount of time that has passed in some cases, but while watching those moments on repeat we get the same emotions as the actual day it happened. Even if we weren’t lucky enough to witness it live, we can empathize with those cycling fans contemporaries at that time and we wish we had been there in the first person. The younger ones now realize why cyclists like Pantani, Indurain or Hinault are idolized, and question themselves how it was possible to perform at the highest possible level with the poor equipment they had available. Those who are used to their carbon wheels, their skinsuits, and their high-end electronic devices would be surprised when knowing that a lot of the climbing times recorded decades ago have not yet been improved as of today.

The tragedy that changed the regulation

Something that any fan born in the XXI century would not understandably comprehend is the fact of watching cyclists without their helmet, risking their lives in routes as dangerous if not more than those ridden nowadays, and the reality is that the regulation that implied its mandatory use was published relatively recently. The compulsory use of the helmet was established after the death of the Kazakh rider Andrei Kivilev because of a fatal crash in the 2003 edition of the Paris – Nice, and until that moment its use was recommended but not compulsory. At that moment some cyclists were voluntarily already wearing it, but that year’s Giro d’Italia was the first race with the new law in force. 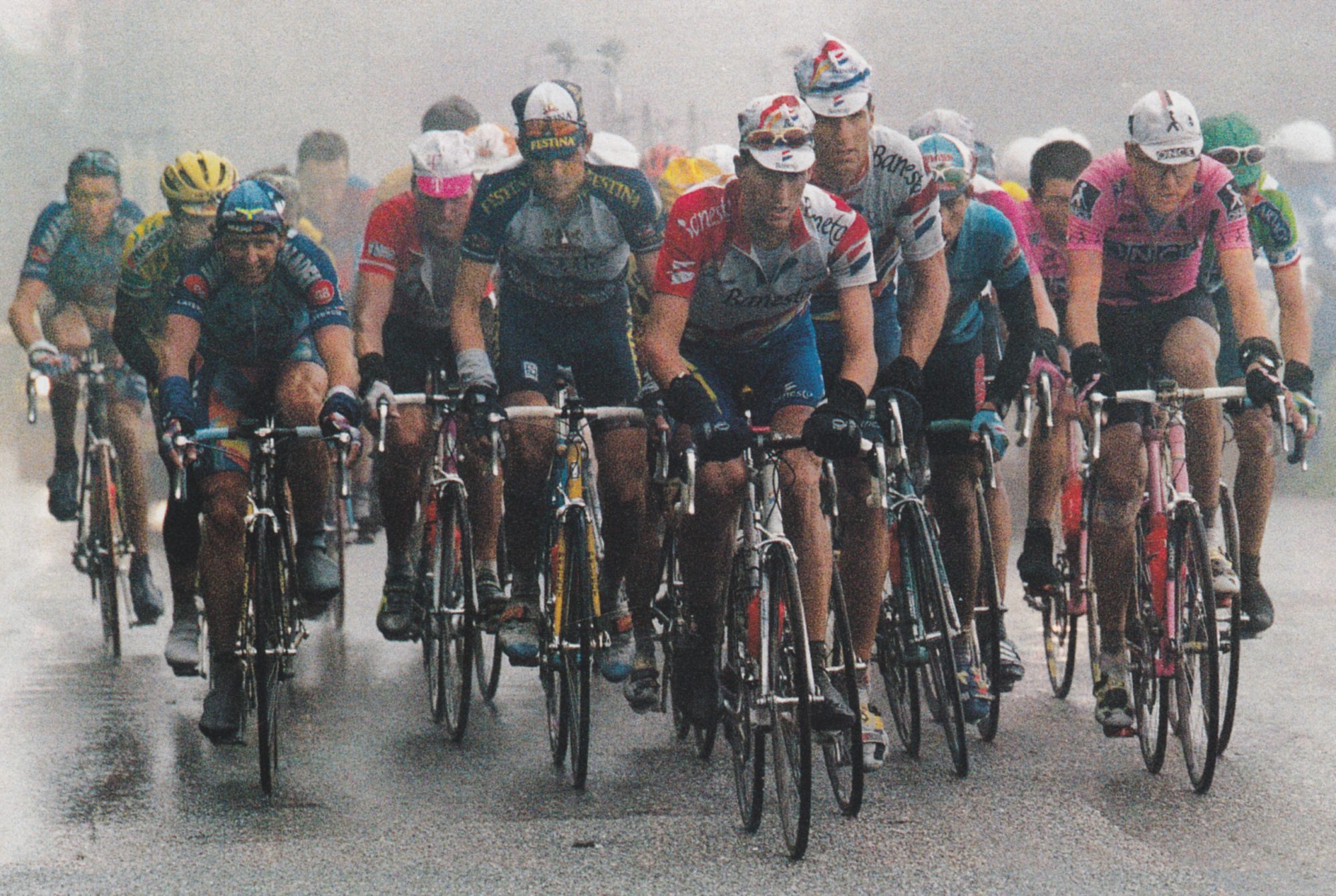 In 1991 the Union Cycliste Internationale made its first attempt, but they ceased its intent after a strike from the professional cyclist association. Some of them continued rejecting the new regulation from 2003, justifying their belief because of how uncomfortable helmets were when climbing during the warmer months of the year, or the extra weight they had to carry. It seems that the “marginal gains” term is not as recent as we may think.

In the wake of those complaints, it was allowed for a couple of seasons to remove the helmet during the last climb of a race if it had more than five kilometers in length. Whenever it was the case, at the foot of the climb one could see some semi-comic scenes with the cyclists throwing their helmets to the soigneurs that were waiting on one side of the road. After several amendments, that permission was removed.

Cycling aesthetics in the 80s and 90s

All of us support the use of the helmet and, fortunately, both in the professional and amateur scene, putting the helmet before going for a ride has become something we do unconsciously, the same as fastening your seatbelt when getting in the car. What is true is that we envy a bit those fans that were delighted watching Cipollini’s oily hair or the flaxen tresses Fignon used to flaunt wherever he raced.

Cyclists could show their own style and their taste for fashion through their hairstyles and other complements, and aesthetics was sometimes more relevant than pure performance. It was their way of standing out from the peloton and letting people know their personality, whereas in the current panorama there are not many elements that allow someone to distinguish two riders from the same time if we do not take into account physical appearance aspects like height or skin color.

Same as nowadays, cycling sponsors make the most of the major important races on the calendar to show their new products to the public. In the 80s and 90s, the cyclists themselves displayed brand new hairstyles for those races they had been training for the previous months. If we think about it, one could understand that at first, some riders were not too excited with the new regulation, but over time it has been shown that in the end, all parties took a good decision.

Who does not remember the famous kerchiefs from Pantani? Those pieces of cloth that the Italian tied around his head were one of the reasons triggered the Il Pirata nickname, besides his sparkly earrings. Another usual association is the one consisting of Miguel Indurain and his caps or casquettes, that few people knew how to wear as well as him during the 90s. Big Mig was a role model in the world of sports not only because of his performance but his position and style on the bike.

The matter about how to correctly wear this type of caps is so serious that even a non-official regulation exists to indicate when it is allowed to wear them. Some other people also proclaim how to wear these casquettes, because according to them there is only one way to do it. It has to hold itself firmly on the head, but allowing a bit of space between its upper part and the hair. The brim or visor must be quite forward without interfering with the range of vision and remember, it is not cool to wear it with the brim up. Now you know how to wear it to prevent people from looking at you in a bad way.

Besides aesthetics, the casquette is a really useful accessory, and only a few pro cyclists still wear them under their helmet. During freezing days it contributes to maintaining a mild head temperature avoiding the cold to leak through the holes of the helmet, and the same happens with the rain. Furthermore, with the brim down, the road splashes are repelled and the rain or sweat drops do not get in contact with the forehead nor get inside someone’s eyes.

These helmets are now less present inside the professional world of cycling, and it is even more common to see people wearing them in a context not related to what is pure performance, such as baristas in cafeterias.

It is surprising to realize how everything has changed in a short period of time, but luckily we can rely on technology to virtually locate ourselves in the past and relive those moments. Sit back, open your eyes, and enjoy the feats from those that left their mark on the history of this sport.

The landscape of the Iberian peninsula, which includes Spain, Portugal,…