The fixed gear scene might not be going through its best moment, but in spite of that, some of the most relevant brands of this world keep the flame alive and are still present, reinventing themselves, and putting everything into the projects they have fought for over the years.

The trajectory of Dosnoventa is known worldwide for their bicycles with top range builds and exclusive designs. However, above everything, it is famous for the lifestyle that they reflected in everything they did: in their crazy trips around the globe, in the competition days with their own team, in the unique merchandising they created in collaboration with other brands, in the breathtaking videos they put together and, how could we forget, the huge parties they organized during certain special events.

In their case, the brand from Barcelona has also been affected by the drop that fixed gear experimented over the last years, and has had to overcome some obstacles to keep themselves afloat in the market.

After many months of hard work replanning the project from the basis, it is time to discover the new era of Dosnoventa.

In the past, we saw how DSNV tried several strategies to keep growing. They attempted to explore other disciplines like cyclocross or road, but it turned out to be a complex and difficult market. They also made some new fixed gear frames, a bit cheaper, with the aim to have a broader portfolio and reach more public, but it did not work as they would have wished.

“We are the city. We will not have road, gravel, or any other kind of bike that is not urban cycling.” 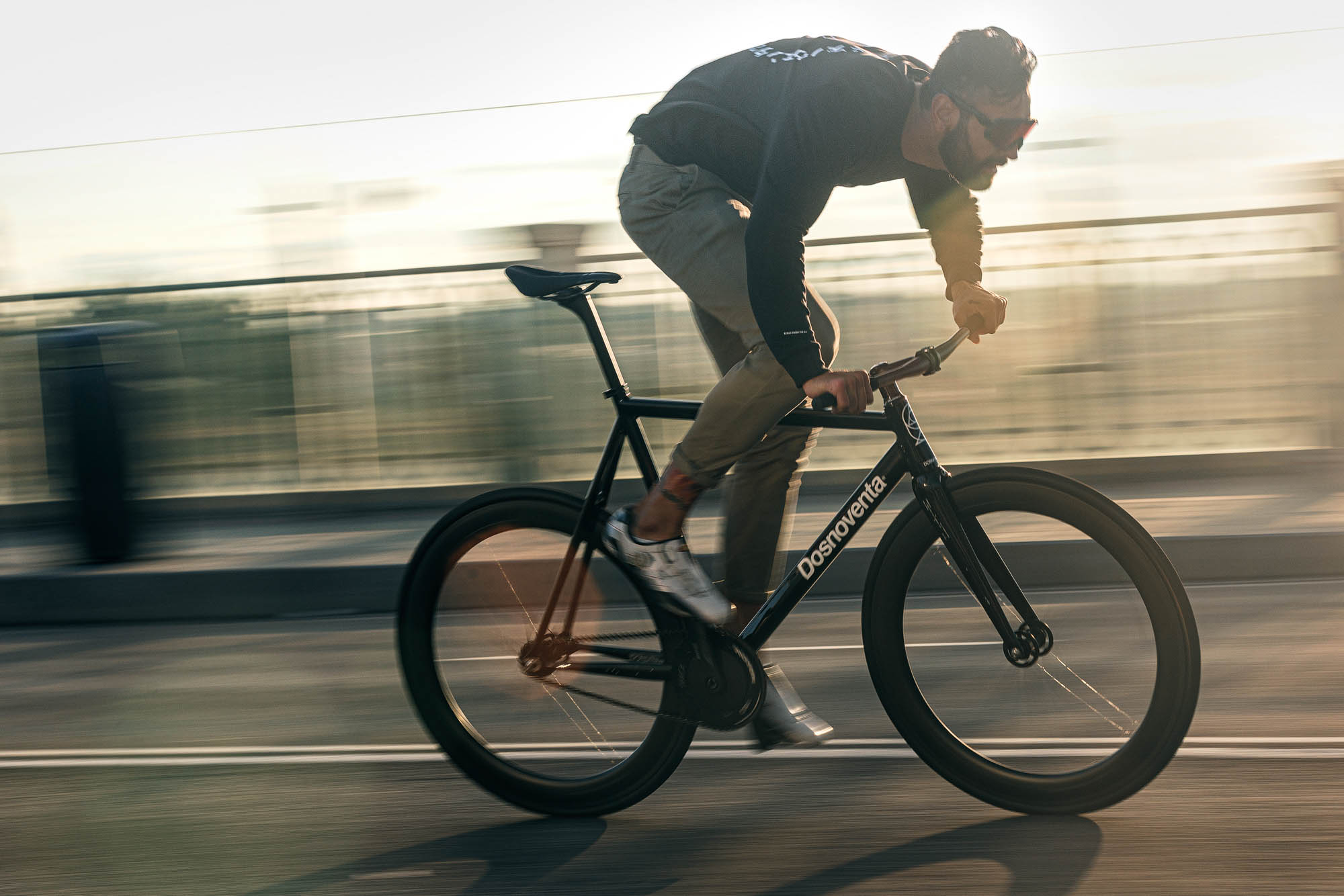 In this new era, the brand is convinced that their style is the city and they want to conquer the streets again with their fixed gear bikes.. They are rooting for simplicity, getting rid of all those ideas that separated them from their natural habitat, going back to the origins, and reinforcing what used to be the pillars of Dosnoventa.

“Through fixed gear, the city transmits some emotions that other bikes would not allow. We like feeling the city from both a bike and cultural level, that is also Dosnoventa.”

As a part of this inside revolution, they are presenting a very updated image of the brand, more serious, more contemporary, simpler, but much stronger and with a powerful look.

They are trying to surround the brand with new energy and make their bikes and a wide range of products much more than simple objects.

They want their particular lifestyle to crossborders and to promote a new culture around urban cycling, where people want to own a Dosnoventa not only for their performance but also for their characteristics, design, simplicity, and beauty.

Reset of the frameset catalog

Another of the big (and difficult) decisions that the team of DSNV took was reducing their range of frames and focusing their offer, solely and exclusively, on the models that represented the identity of the brand: Barcelona, with steel tubing and classic finish, Detroit, known for its pursuit geometry, Huston, now renamed as Los Ángeles, and last but not least, Tokyo, the only full carbon model of the brand. But that is not all. In addition, they are leaving behind the custom color option they were offering to their clients to focus on the r simple but neat designs in full black with some sparks of color, different in each model.

“We wanted to recover the basis of DSNV, go back to the icons of the brand, its essence, and try to promote them. The frames will be all black to highlight the pureness of the frame and make a reset of everything we saw before.”

Alongside the renewed frameset catalog, we will be able to find a new range of components of the brand, where the lightness, the esthetics, and the quality will be recognizable at first sight.

“These are components that you will be able to build on any bike because they are truly beautiful, black is the main protagonist.”

Within the range of products they will offer, there are handlebars of different types (we want to stress out that the drop model comes without cable holes), stems and carbon seatposts with excellent finishing touches, and full-carbon wheels of great quality, among others.

All the components have been meticulously cherry-picked, taking care of all the details to achieve the maximum quality and excellence in each and every single one of their bike builds.

United with the Brotures brand and with a huge presence in the Asiatic continent, the brand is trying to make a stand to reclaim their place thanks to a new business strategy and a very important online campaign.

Their main objective is for the fixed gear scene to flood again the streets of the most important cities of the world, withDosnoventa becoming a reference again in Europe and the US as it did in the past, and as it is currently doing in Asia. 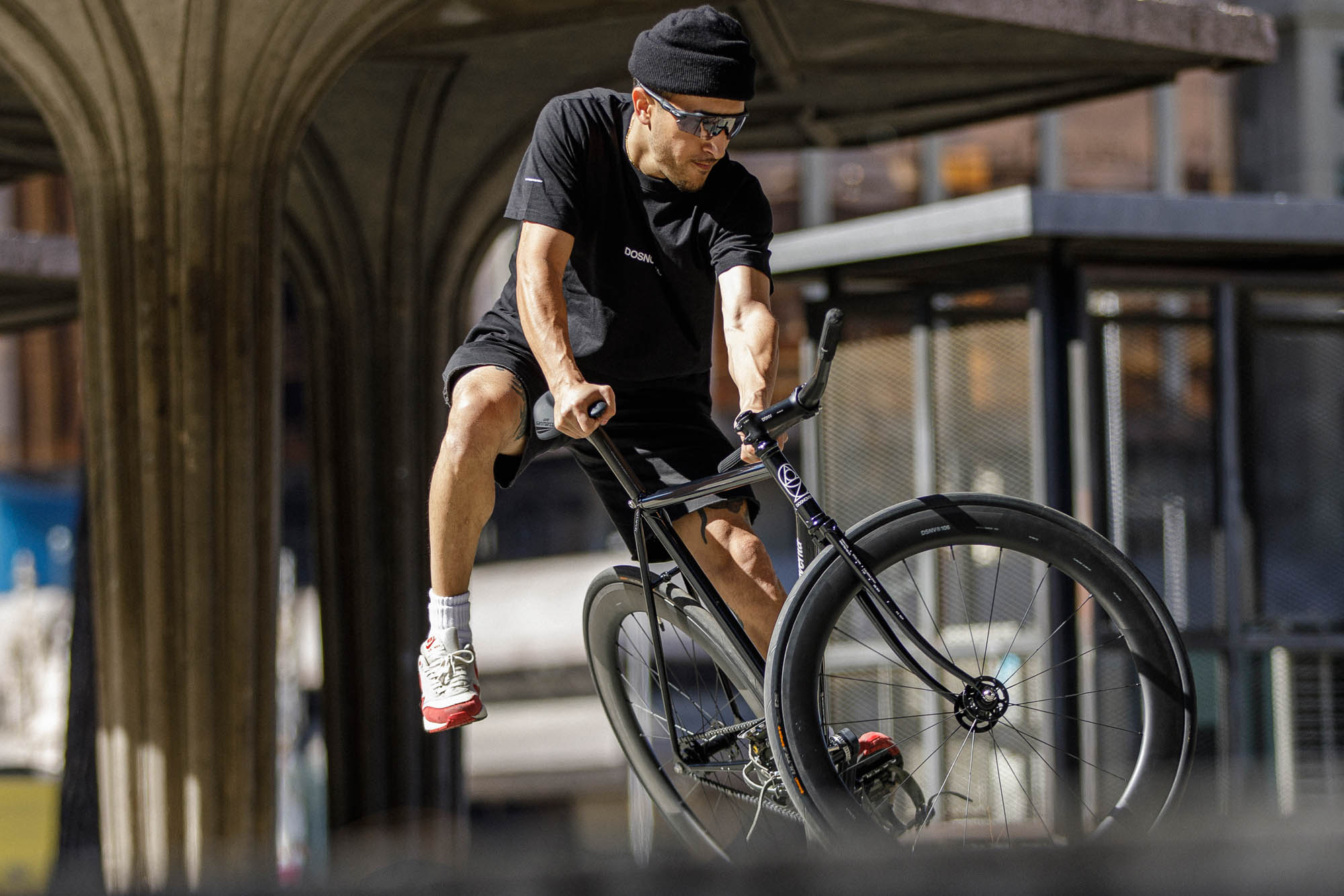 Along with the news and changes, Juanma and David told us that this is just the beginning and that in the next years we will see many announcements that will shake up the urban cycling scene.

When in 2012, Juanma Pozo, co-founder of Dosnoventa, got in touch with his friend David A. Turover to get some help to work on the image of a project he was creating, nobody thought that that small idea would end up being what it is nowadays and that DSNV would turn into a worldwide landmark.

From his side, David has not stopped either. He managed to make his own way as a creative director working with large agencies and gathering a huge experience in communication, product development, and strategy.

Currently, after eight years full of success, growth, changes, and some ups and downs, the trajectories of Juanma and David are getting together again to work on a common project once more.

“I have always closely followed the project and I never stopped dreaming of being able to come back to the project eventually.”

On this occasion, the challenge he will be facing has nothing to do with the very specific work he did at the beginning of DSNV. The challenge is much more ambitious: leading the new transformation of the brand and relaunching Dosnoventa to the top of the market.