Grimpette is a photographic project created by two French photographers and cyclists: Magali Paulin and François Deladerrière. In the beginning, Grimpette was created to share their experiences while cycling, the great roads, and the landscapes they find on the way. As photographers, they realized how important it was to document their trips, and they would naturally start taking pictures during their first bikepacking trips together.

The idea of Grimpette was born on a Scottish hilly road near Applecross. I think both of us wanted to share our experience and feeling of freedom on the road: so much time outside crossing lands, observing the variation of light, stopping by whenever we wanted, and feeling lucky to be there just pedaling. A sense of total freedom.

François is a landscape photographer that often works by the mountains, especially in the zone of the Alps and Pyrenees. He has been into cycling for a long time and, with no doubt, he is the engine behind the projects and cycling challenges of Grimpette.

Magali is the rookie. She is also a photographer and she only started cycling four years ago. In addition to her personal projects, she works as a freelancer in the sports industry, focusing on running and cycling events, and also for press magazines. 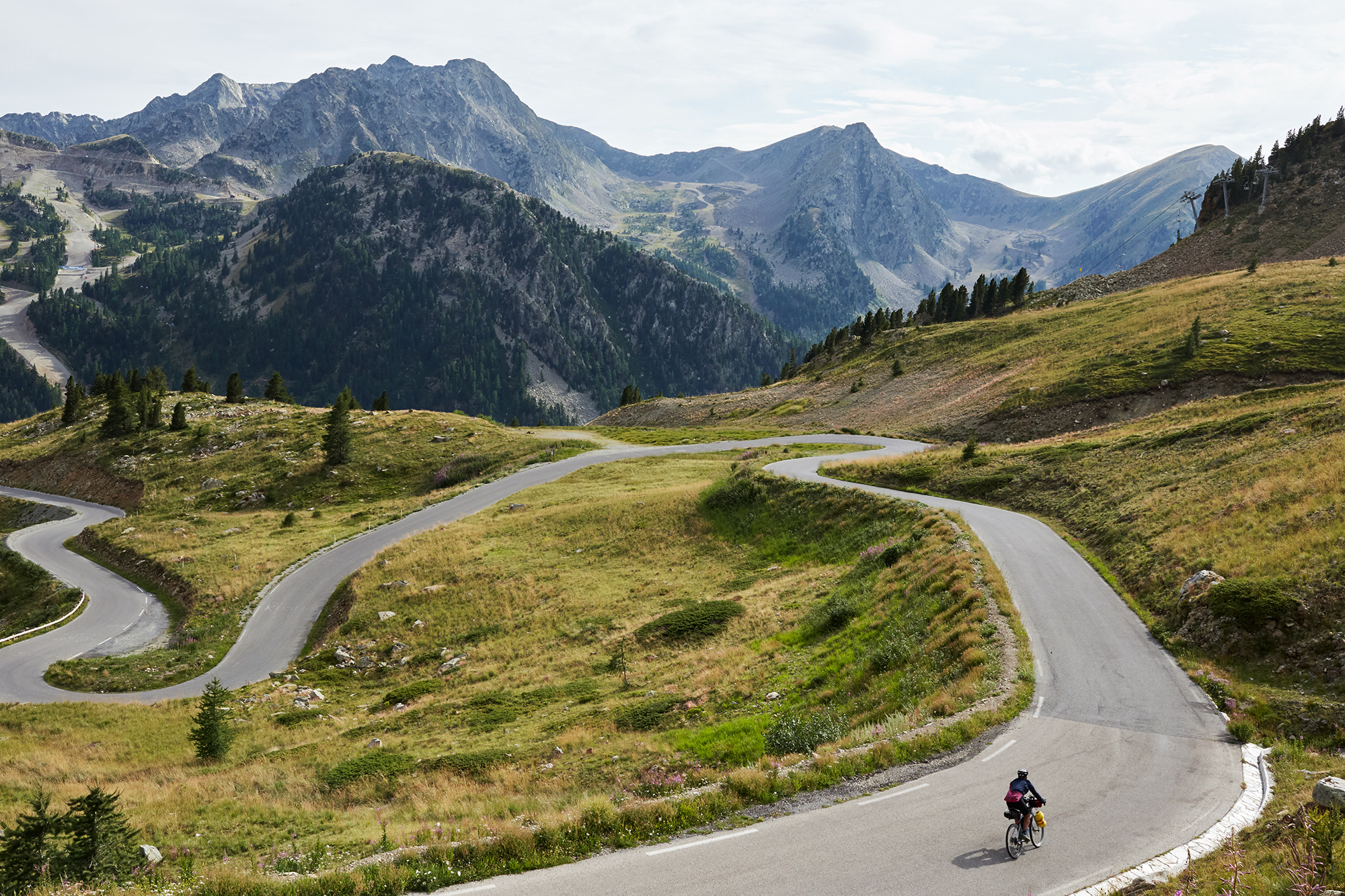 The essence of Grimpette is to share Magali and François’ daily rides or longer adventures, an excuse to discover new places, new things, and a chance to meet new people and make new friends with the common passion for cycling and photography.

In Grimpette we share pictures of our bikepacking trips but we also document the cycling community (stories, events, general cycling). It’s a place where we feel free to share whatever we want from commissions to personal adventure. There are no rules, just a taste for good photography, good stories, and good rides.

‘La grande traversée des Alpes’ is an ongoing bikepacking photo project, approximately 2.000 km through France, Italy, Switzerland, and Slovenia, crossing the whole Alps mountain range on gravel bikes. Magali and François designed the route inspired by the Via Alpina and Rough Stuff Cycling books. The route has a lot of historical interest spots, like military roads, bunkers, old borders, or ruins of World War I. This is a long-time project, with no aim of being fast, but to take time for cycling, adventure, and photography. Magali and François hope to finish the whole route in 2 years in several different stages of 10-15 days.

They started last summer riding from Ventimiglia to Modane: 600 km with +16.000 m of elevation gain divided into 70-80 km stages during 9 days. It was all about adventure and bikepacking, sleeping in every place that allows you to rest and take a shower, it does not matter if it is a campsite, bivouac, a friend’s mountain hut, or a hotel room.

They traveled at high altitude through the famous Via del Sale, passing through some amazing and quite tough climbs and passes such as Colle della Lombarda, Bonette pass, Col de Vars, Durance Valley, Montgenèvre and Sestrières pass, Strada dell’Assietta, Colle delle Finestre, and Colle del’ Moncenisio. An impressive playground.

There is a special feeling while riding high on mountain crest roads. Some kind of readjustment. Some people may have the feeling of achievement doing that sort of hard climbing. For us, it was rather an exercise of modesty. You feel like a tiny little thing facing the immensity of the mountains. You feel part of something bigger than you. Nature can be quite impressive at high altitude.

We rode several iconic passes: Lombarda, Bonette, Montgenèvre, Assietta, Finestre. All those climbs have their own stories. The astonished bunker of the Lombarda laying on the crest, the gravel road to the Bonette with the story of the eagle and the fox fighting for eating a marmot, the secret gravel pass in the forest to Montgenèvre with the biggest ‘saucisson brioché’ I’ve ever eaten, the dreamy wooden cabin of our friend Clarisse in Piedmont, our best day of riding (ever in life) on the Strada dell’Assietta and the fire during our last bivouac on Moncenisio. I have to admit that the best moments are often in relation to food (that’s why we ride in Italy!).

The truth is that this journey was the occasion to discover some places less known and invent our own path crossing of the Alps. For instance, the gravel road we took to climb the col de Vars or the path we found to ride down Moncenisio. The hours of preparation months ago on maps were often rewarded. That’s one of the more important pieces of advice we can give to people who want to do such rides. Pay great attention to your route. Work on it. Study the maps. If you really want to ride gravel by the mountains you can’t just use Komoot or Openrunner. We used several applications to draw routes in order to use different kinds of maps (roads, hiking, and alpine trails). We used the Rough Stuff Cycling book to pick up pieces of their route and tried to connect them with our own. That was mostly François’ job. He spent lots of time on youtube looking for videos of action cameras of mtb riders or hikers to have a closer look at some passes. He works on it and then shows me the different options and we talk. Will it be easy to ride? What kind of ground? Climbs? Do we need to stock water and food? Will we have to hike the bike? for how long? At what time do you think I will start crying?

We hope to do the next stage this summer if the COVID-19 pandemic is controlled and the borders open to travelers. We will start from Saint-Michel de Maurienne in France and we want to ride through Savoy (France), Switzerland, and Italy.

Certainly, it is very important to choose the right bike setup for these kinds of adventures. Gravel on the Alps is a mix of tarmac, trails, single tracks, smooth gravel roads, you have a bit of everything so versatility is a very important factor. In these cases, the ideal bike setup was one that would allow switching from trails to tarmac.

We had the chance to have bikes made especially for us by an Italian frame builder, Stefano, owner of Ciclitorino and Dësgenà bikes in Torino. The two bikes (Ciclitorino Lingera) were created at the beginning to be able to ride the Torino-Nice Rallye. It’s a steel frame for long-distance comfort but with a carbon fork to be lighter and stiffer.

The design has a lot of sloping, similar to a mtb, to shift the center of gravity and bring stability. We choose 27.5 wheels and a SRAM group 24×36-11×42 to help the overcoming on steep climbs with a laden down bike. These are real goats!

The frame is full of holes to pack lots of stuff. We tried to pack as light as we could: one tent, two mattresses, two sleeping bags, cooking tools, clothes, and food. We brought two thin books but I think none of us opened them. For the next stage, we hope to be more efficient in controlling the weight of our materials. When you are climbing, each gram becomes important.

It is also very important to choose the right photo equipment to travel comfortably and to take good pictures. Everyone has a special setup.

We use my old Canon 650D because it’s a light full-frame camera with raw format. We used the Canon pancake 40mm on it. Working with a fixed lens is much easier while traveling. It’s more instinctive and we definitely think that it allows being more precise when you are framing. 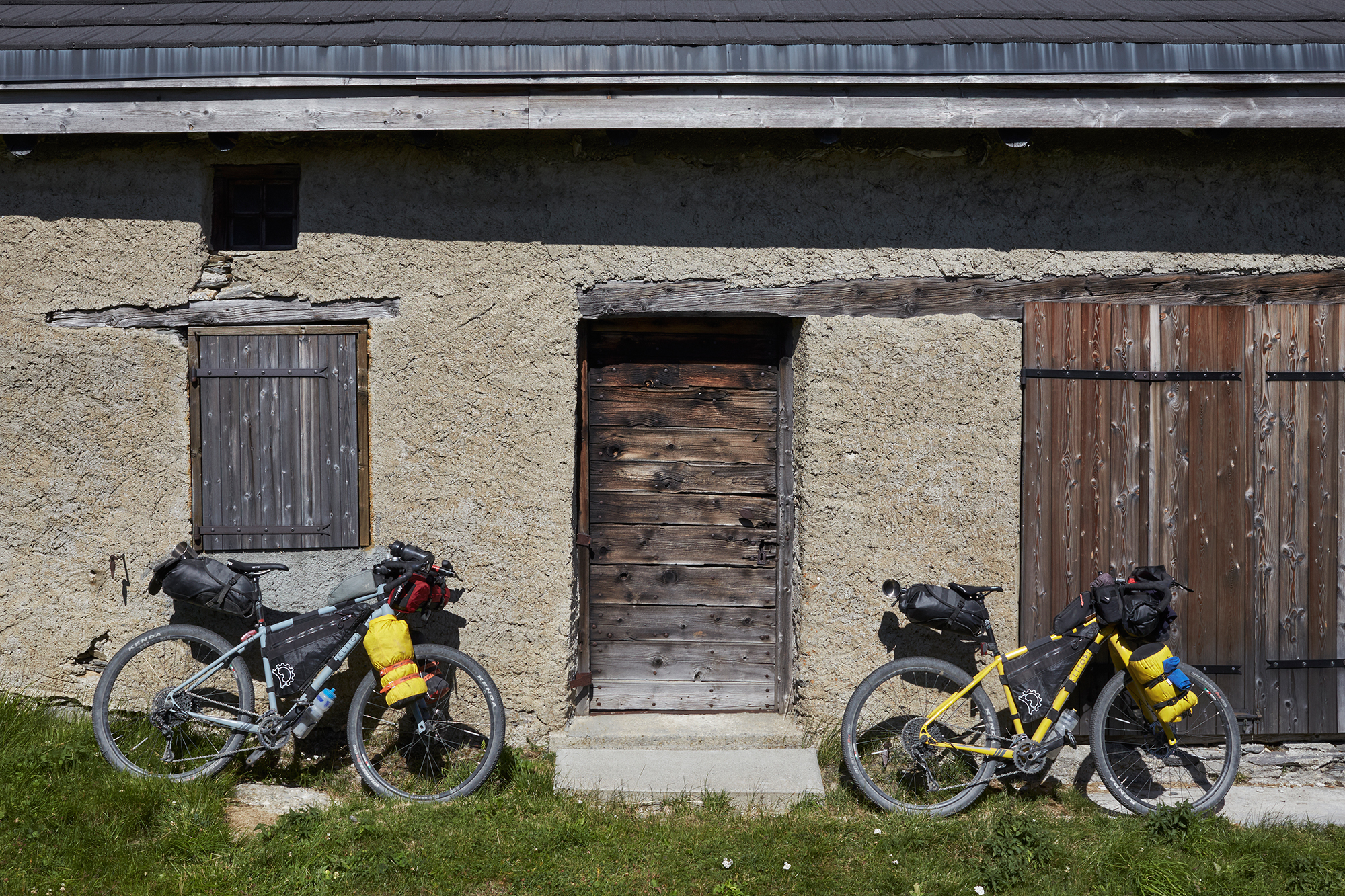 Little by little, the gravel scene is becoming a worldwide…