Whether browsing the internet for a brand new bike or for a spare component we may need, all of us have recently spent a decent amount of time looking for information about the pros and cons of each of the options that were on the table, becoming absolute masters in that field.

When thinking about a possible change of wheels, a few big players already established in the mind of any cyclist have probably appeared on the screen, but if you dig into the latest performance analyses and reviews, there is an underdog that you should really consider.

Hunt Bike Wheels is creating its own space in a market already full of companies with budgets several times bigger than theirs, that can spend millions on marketing campaigns and sponsorship deals. With a great recognition from the users that have tried its products and an increasing income year on year that leads to a bigger share of the market, other firms must be feeling the pressure from the British manufacturer that excels in innovation. 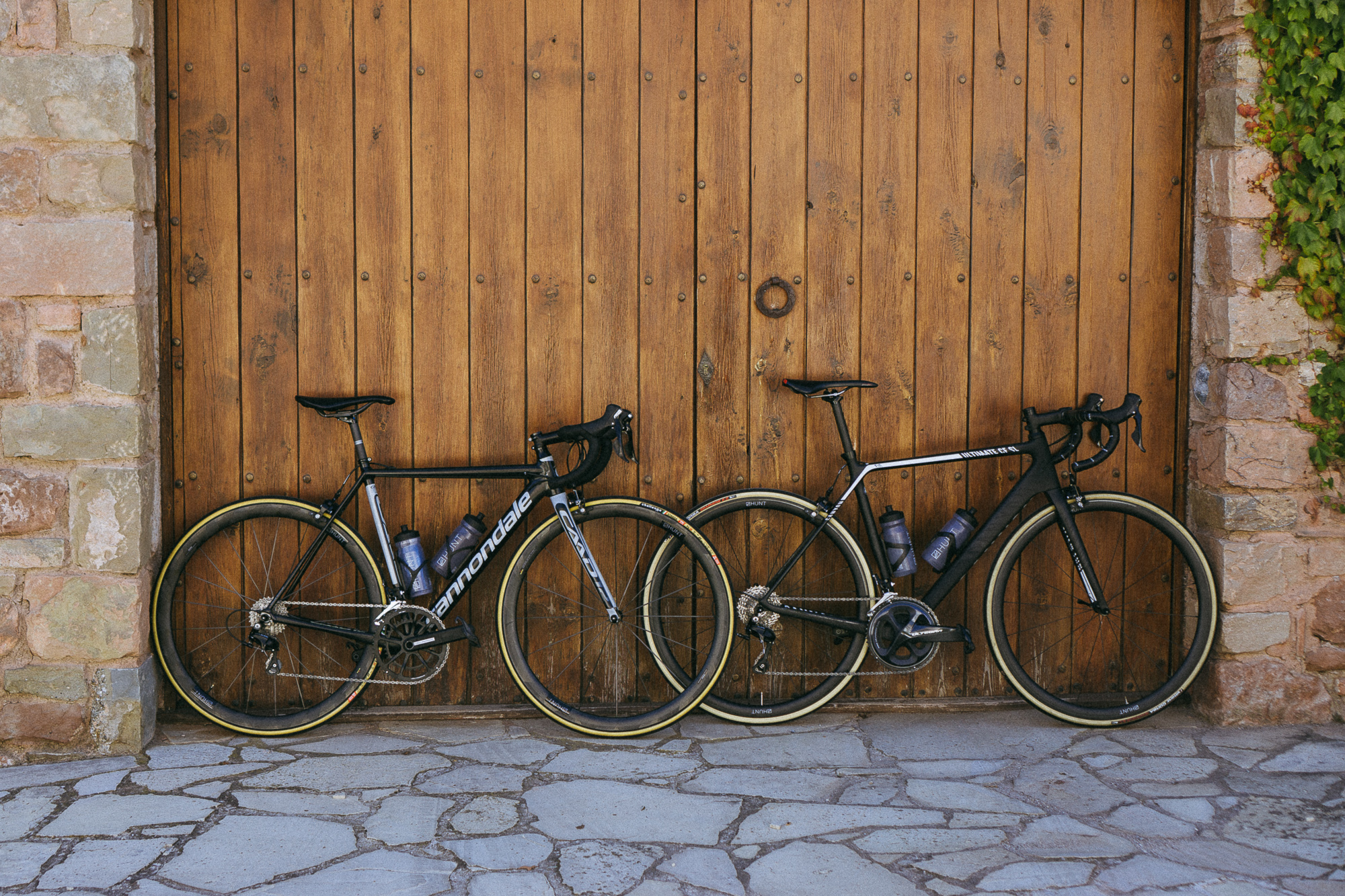 The firm started with a first model of road wheels but quickly got into other disciplines, and nowadays they cover the full range of wheels; shallow and deep, gravel, mountain bike, hill climb, and many more.

The brand is an advocate of tubeless so their wheels come ready for this type of assembly, but the entire range is also designed to work excellently with clincher tires and tubes.

The ultimate goal is to make wheels with high specs and reasonable prices to make it accessible for most people. Their formula seems to be working because if you head to their web page you will see that most models are only available for pre-order due to the high demand. Shipments are often fully sold before they arrive from where they are built in Taiwan.

Everything inside Hunt is done focusing on optimizing decision making and customer experience, including the pre-order mechanism to cover part of the cost of manufacturing, and the strategies behind having a big gap between the announcement of a new wheel range and its real launch. Forecasting is key, and they seem to be doing a lot of that. 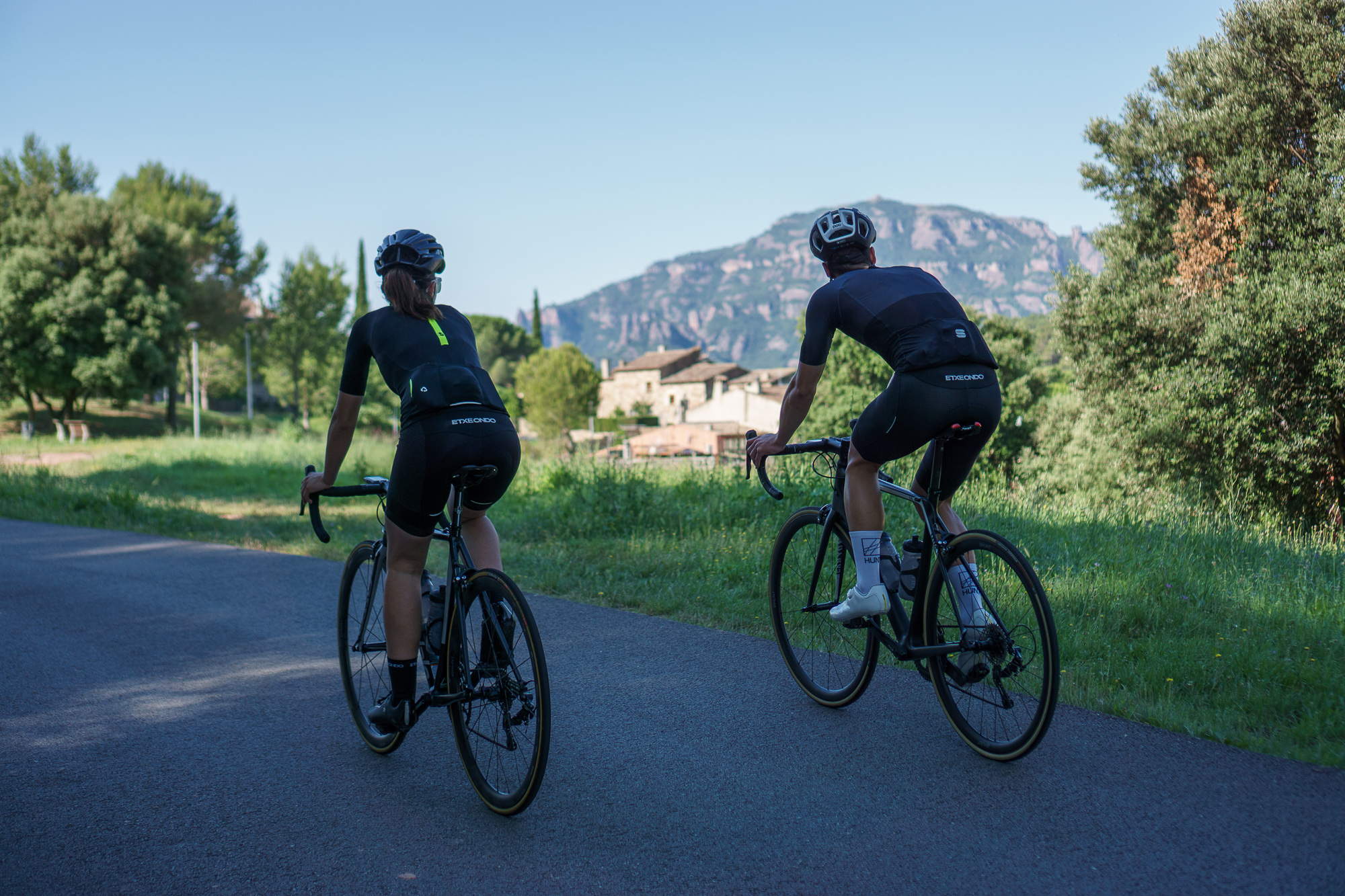 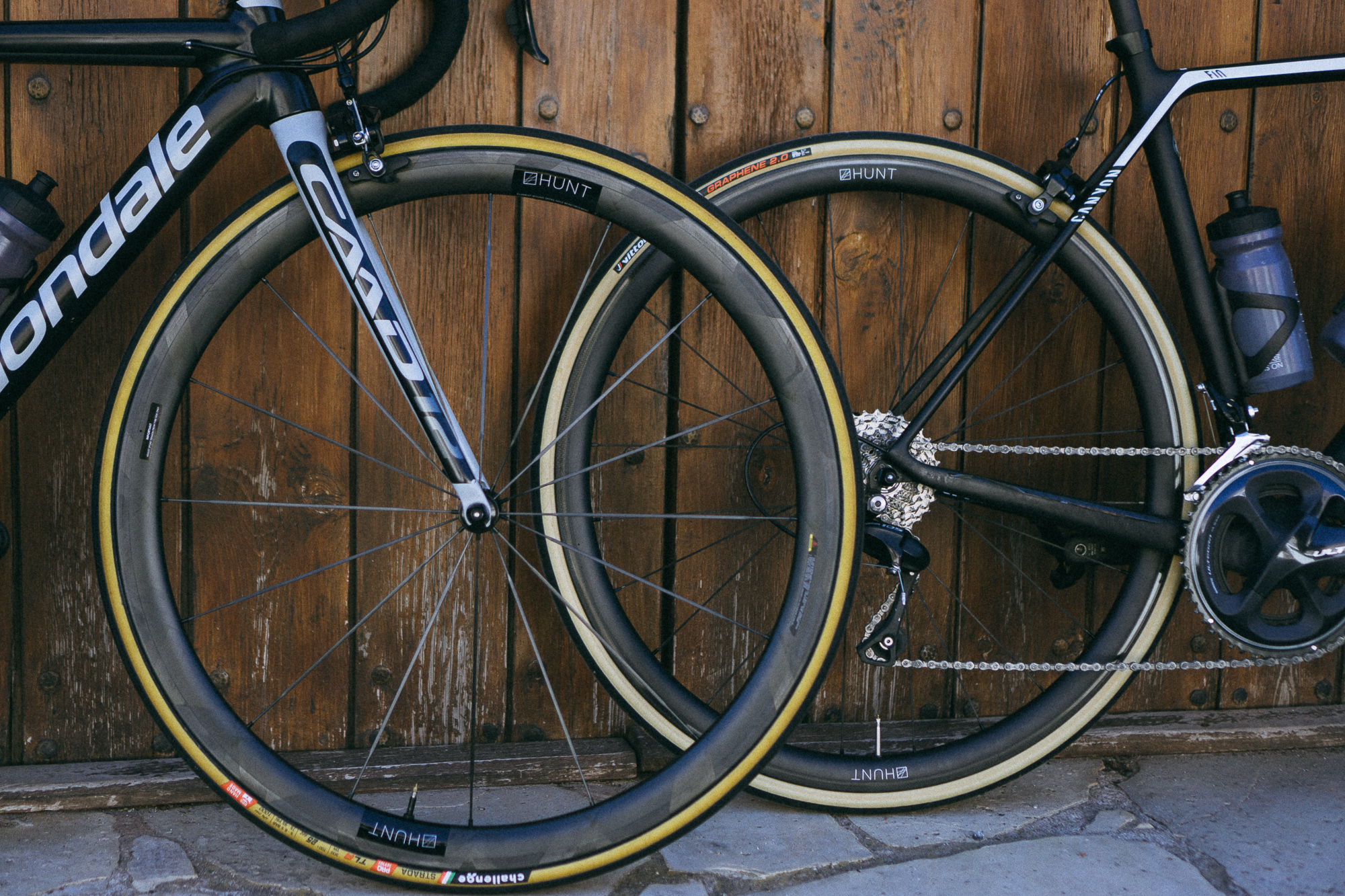 We have tested two of their flagship models, the HUNT 36 Carbon Aero Wide and the HUNT 36 UD Carbon Spoke. Both sets came with the validation and signature of the person that build the wheel, a simple detail that proves that all wheels are hand-built.

For people used to aluminum wheels, the upgrade to a carbon set usually causes a pleasant surprise. After in-depth testing of this model, we also wanted to count on the opinion of one of the editors, who was riding a set of high range wheels for the first time.

“I guess this is what everybody says after trying new carbon, but the momentum you get when accelerating and the immediate transfer of power from the pedals really amazed me. The 36 mm deep wheels performed at the top level both on the flats and on the mountains, but I’m sure that the 50 mm version, thanks to the wide rims, would also have an extraordinary overall performance. And what can I say about the freehub? People suddenly turn themselves when they hear me free wheeling, and I’m the envy of other fellow cyclists that wish that their bike did a sound like mine”

The 27 mm (19 mm on the inside) width of the rim improves the aerodynamics and lowers the rolling resistance. The bearings are provided by EZO, and together with the low-friction seals of the wheel, one can feel the decrease in rolling resistance. As regards the rear hub, one has to highlight the engagement angle of just 7.5 degrees, which makes it very reliable. The HUNT 36 Carbon Aero Wide can fit tires from 23 mm up to 45 mm wide and the pair weighs 1,417 g. 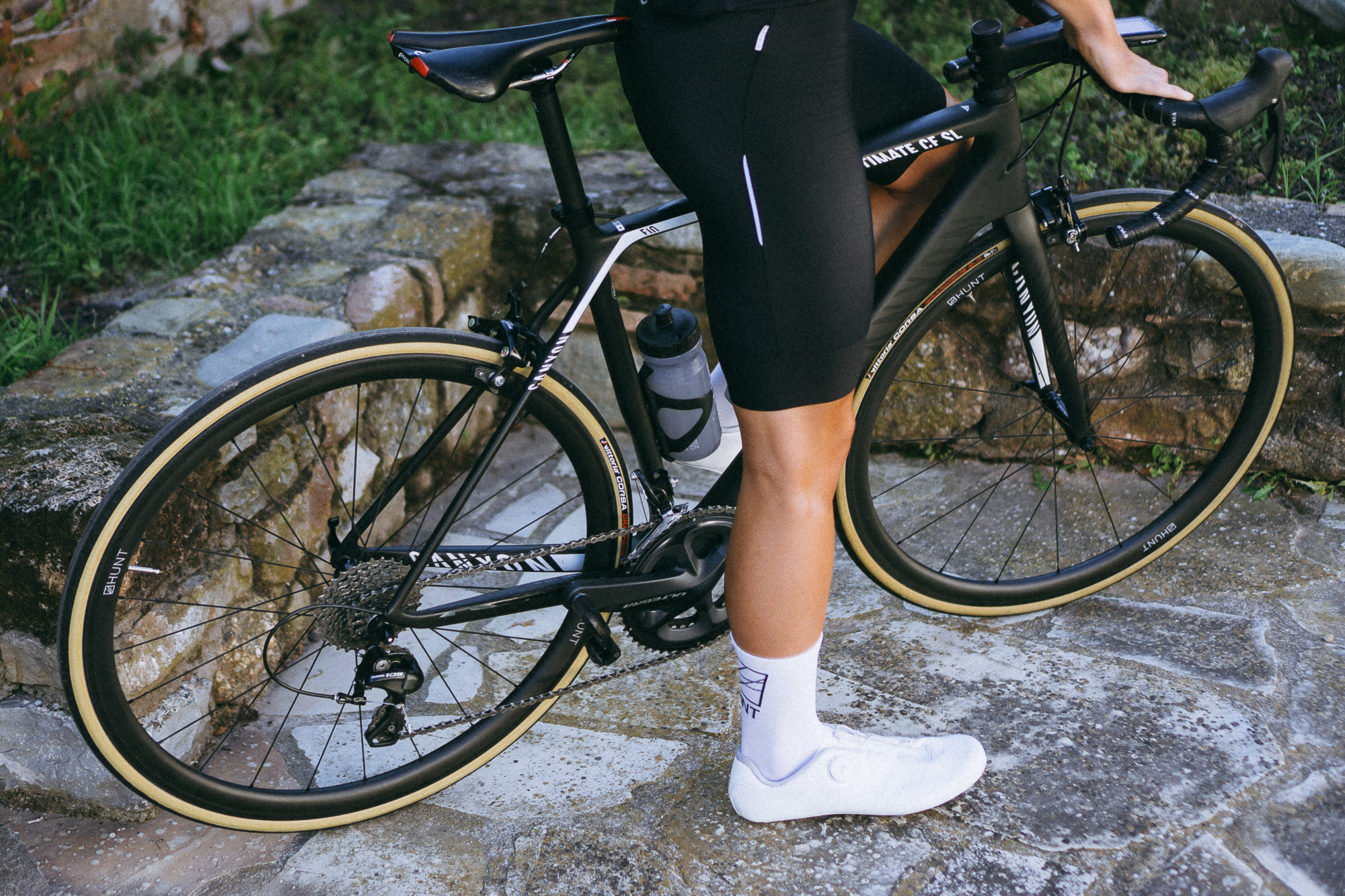 With the carbon spoked wheel, Hunt solved the problem that other manufactures had when wanting to replace the spokes. Carbon spokes have been present for a long time but they weren’t in the market because there wasn’t a practical way to deliver them. In this model, the spokes are pulled before the fiber is molded, creating a mechanical bond that Hunt calls TaperLock. Compared to steel spokes, which reach 300 kilograms of force per spoke, the TaperLock manages to increase the strength of the carbon spokes to 450 kgf. They are obviously also lighter, with only 2.7 g per spoke.

The filament winding process is adaptative, with differences in thickness, orientation to minimize weight and strengthen the spoke areas, resulting in less than 1,300 g of weight. In this case, the hubs and bearings are from CeramicSpeed, also with an engagement angle of 7.5 degrees. It is light, strong, and has many advantages as regards weight and stiffness. 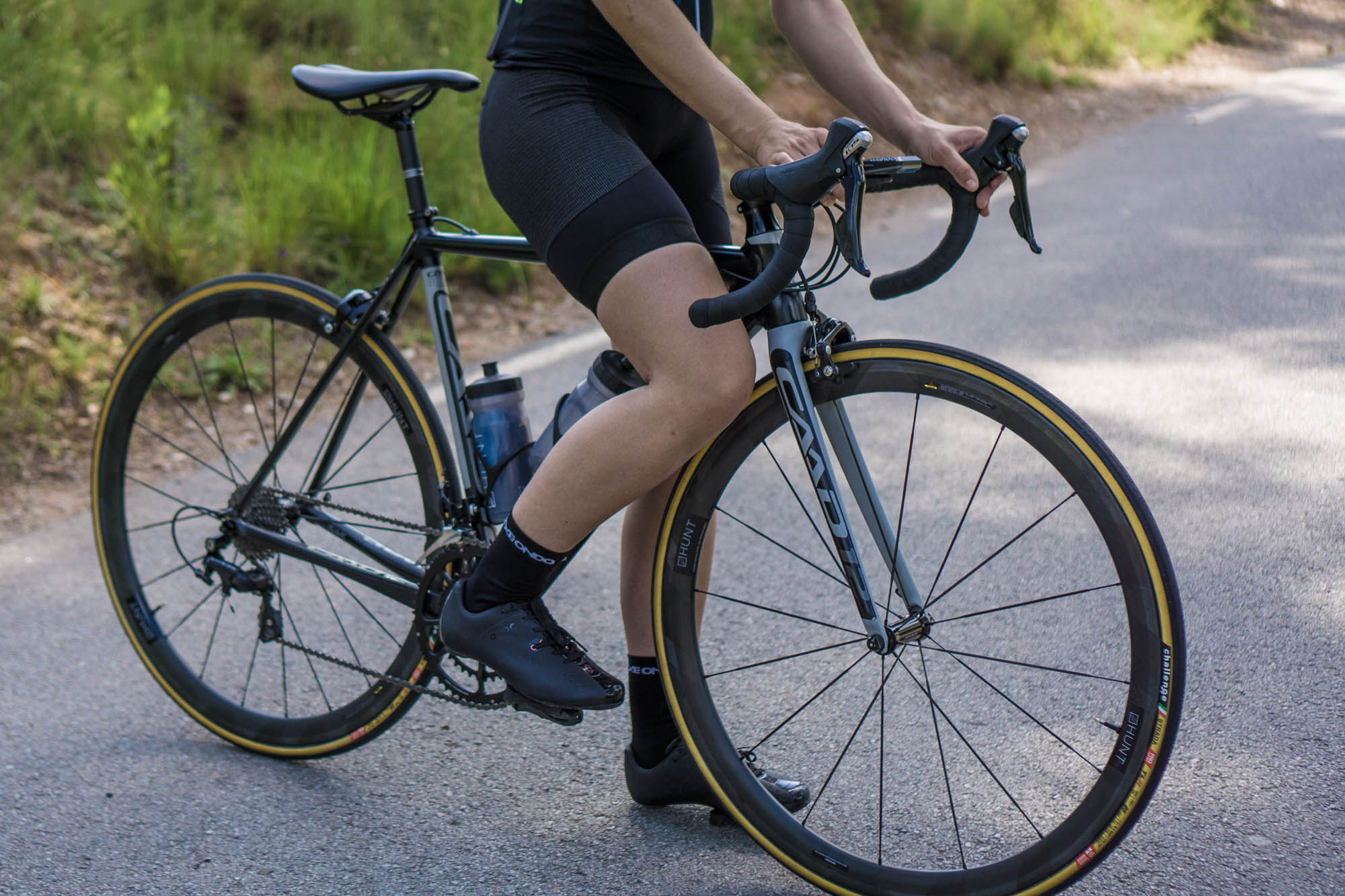 The braking performance is above most of the wheels we have tested so far. We are still loyal to rim brakes, and these Brakco Griptec carbon specific rim brake pads are not making easy for us to change. There are now also available two versions of the carbon spoked wheel with disk brakes, with a rim depth of 44 and 54 mm. These took a bit longer to be launched because disk brake forces are transferred differently.

The rest of the portfolio

The latest innovation from Hunt saw the light when the firm introduced the new deep section aero wheels, the Carbon Aerodynamicist. This range came at first in three different depths only for rim brakes, but this technology is now already applied to their disk brake wheels.

The starting point was the HUNT 48 Limitless Aero Disc, that maximized performance partly thanks to a rim profile wider than most wheelsets. Hunt understood that many riders are still attached to their rim brake bikes, so they wanted to enhance their riding experience in a period of time when bike manufacturers were already producing disk brake models.

The output of their tests showed that the competitiveness in performance of their sets of wheels against class-leading competitors with higher prices, with the HUNT 82 Carbon Aerodynamicist (the version with the deepest rim) was ahead of the rest. Further technical information about the study can be checked in the white paper they published.

In addition to the internal product engineers, it is important to rely on external feedback to continue improving every wheelset, and what better than a cycling team to do so. Hunt started its partnership with the UCI Continental team Canyon dhb p/b Soreen in 2017, and it has been a successful journey so far. For the remainder of 2020, the team will be mainly using the HUNT 50 Carbon Wide Aero, with tubeless and with rim brakes, something that is becoming rare in the pro peloton. This year they have also announced two new sponsorships of female teams, the Bianchi Dama team in the UK and LA Sweat in the US.

As its name suggests, Hunt strives to chase any chance to improve their rims, hubs, spokes, bearings or nipples, and this continuous development is what will allow them to move forward like if they didn’t have to put extra effort, the same feeling we get when riding their wheels.