There have been a lot of historical races in the last couple of seasons, and cycling photographers have the privilege of watching the race unfold from a unique point of view. They may be there for work instead of leisure, but no one can deny that they have witnessed first-hand moments that will remain stuck in our heads for a long time.

Kristof Ramon is one of the most influential cycling photographers, but even after all these years covering the pro peloton, what he has been able to experience during the past few weeks has no precedents. The Road World Championships in his hometown and an epic Paris – Roubaix under the rain for the men, which was also the first-ever encounter with the French cobblestones for the women. Two events that will have a place in the history of the sport, and which happened only a week apart.

When the World Championships came home

Kristof is born and raised in Leuven, so when he knew that the 2021 World Championships were going to finish in his hometown, he really wanted to be involved in the event, either in collaboration with the organizers or not. “Cycling is an international sport that takes place all over the world, and all of a sudden the biggest event came here”, mentioned Kristof, still trying to process what happened. After spending so many nights a year in hotels, this time it was the rest of the world who traveled to enjoy a magnificent week of cycling in Flanders.

One of the side events during the WC was the photo exhibition that he curated with his own material and with photos from other cycling photographers too, with a focus on the riders that have become world champions over the years. Nonetheless, his most important role in the event was an unexpected one and involved being the chief photographer of the Local Organizing Committee. That meant that he was the only photographer allowed to work on the motorbike in the race alongside the official UCI photographer.

Unlike in other events, where up to a dozen photographers are given the green light to cover the race from the back of a moto, the World Championships are extremely limited in this regard.

He already knew all the climbs, turns, and the best photo spots along the route like the back of his hand after all the time he has lived there, and the number of races around that area that he has covered. He must have already planned from where to shoot at every moment of the race, but then the LOC contacted him and everything changed. Spending the entire day shooting from a moto may have constrained a bit his range of possible photos, but he accepted the proposal, as it was a once-in-a-lifetime opportunity.

“Being in that position was unique. The roaring riding up the Wijnpers for the first time… I still get goosebumps. My daughter and my wife were along the road, and I saw a lot of friends in the middle of the race too. My father was taken to the local hospital just the week before, and although I knew he was in good hands, it made it extra emotional” 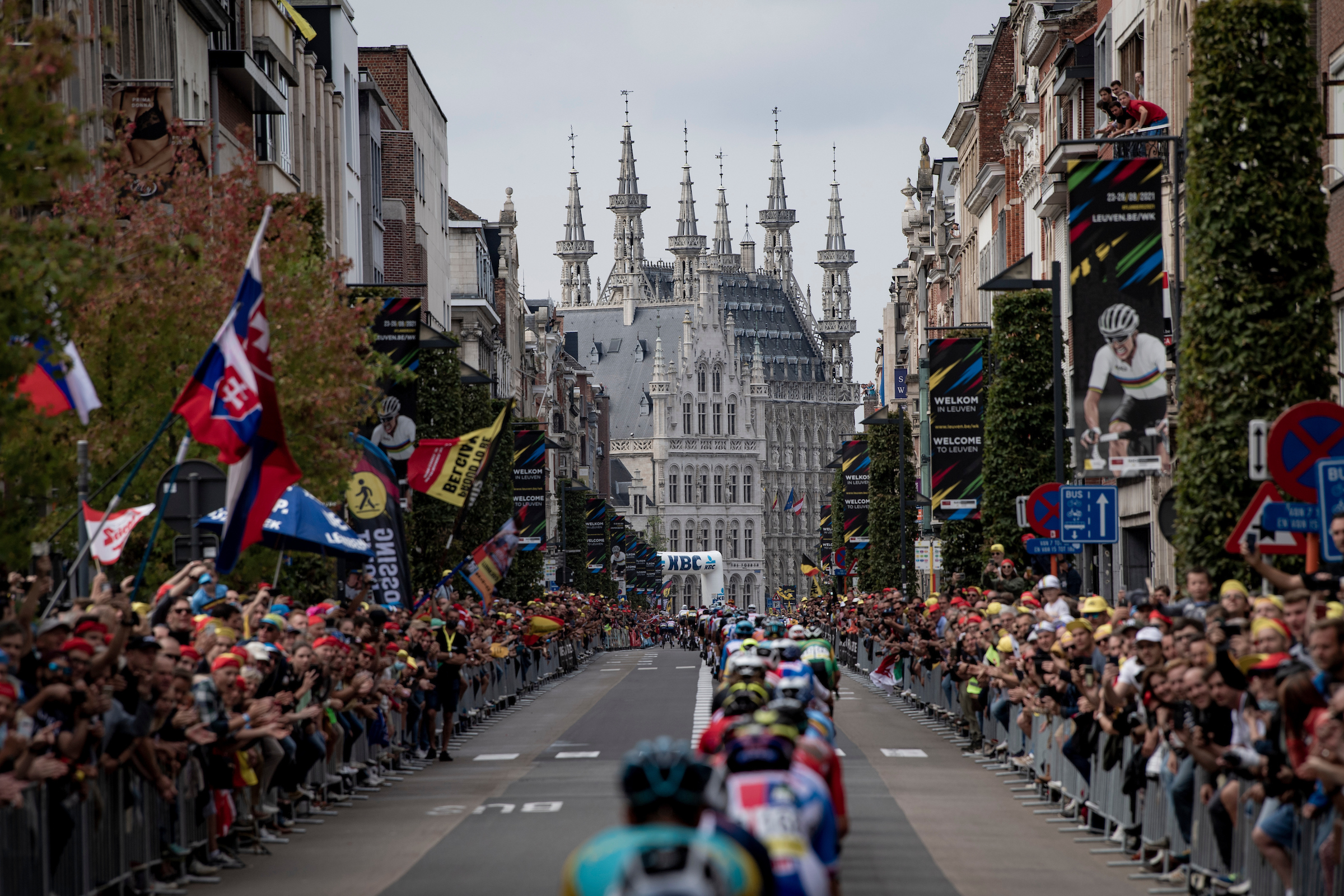 The number of hours working over the weekend prevented him from meeting the desired amount of riders, friends, or journalists, but he acted like the host any time he had the chance to welcome people he knew. He felt proud of his city during the whole week, and despite the professional commitments, he still enjoyed it a lot.

“It was the peak of my career as a cycling photographer. It all came together, coming full circle after all the time spent away from home”

A weekend of cobbles and mud

Same as the riders, Kristof Ramon and all the other photographers were afraid of what was coming. The weather forecast showed already at the beginning of the week that the chances of a wet Paris – Roubaix were high, 19 years after the last one. The excitement turned into fear as the race day approached, but everyone had enough time to get ready for a muddy edition. While the riders tested wider tires and lower pressures during their rides leading up to the race, Kristof and the rest of the photographers prepared the coverage of a race under exceptional conditions. 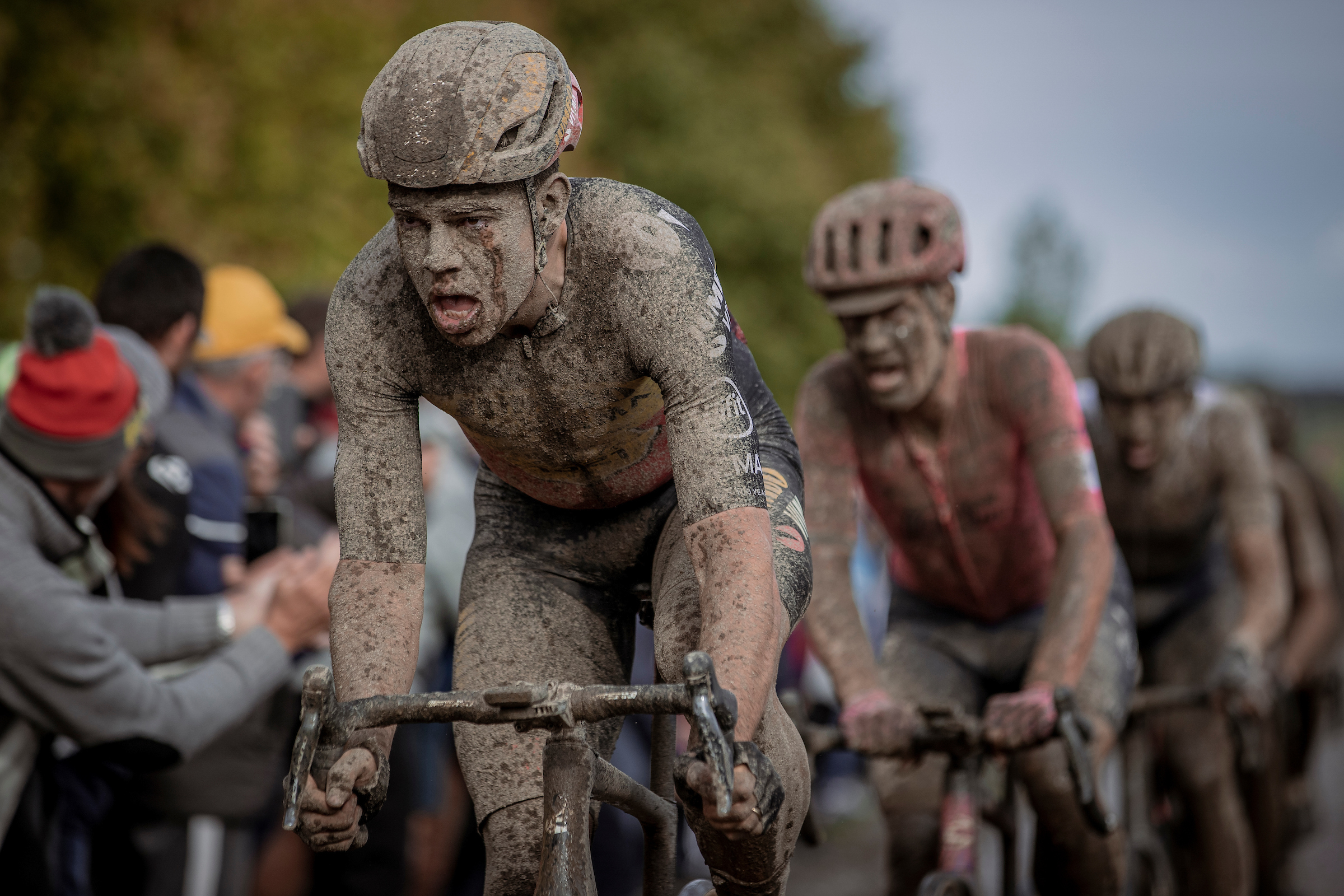 For Paris – Roubaix, he relied on the help of his trusted backup photographer Rhode Van Elsen and the original plan was for both of them to work from the motorbikes, but that usually means more costs and logistic nightmares. They couldn’t find a second person to drive a moto, because one of the riders Kristof relies on to do the task of motorbiker got injured earlier in the season and decided not to come back, with all the other moto pilots being already booked for the weekend.

They opted for a moto and a car instead, and given the weather conditions, it resulted to be a smart move. The first 100 km of the race before the riders reach the cobbles tend to be useless from the perspective of a photographer, so Kristof did those first hours inside the comfortable car and only faced the rain to be on time for the pass of the first segment. When he arrived at the spot, the other photographers were already shaking after all the time they had spent waiting outside, and their camera gear was already soaked.

By taking a look at the photos he took during the weekend, one can think that he was everywhere, as he captured the crucial attacks, the suffering of riders, the motorbikes crashing… Nonetheless, Kristof says that the way he sees the race is very fragmented.

“People that watch the racing on TV have a much better overview, whereas I only see snapshots of it. I knew that at the beginning of the Carrefour de l’Arbre Moscon was the leader by a big margin. I was located at the end of the segment, so when they passed by and I saw that he was no longer in front, you can imagine that I had no idea about what had happened”

With the women racing on Saturday and the men the following day, the entire weekend involved cobblestones. It is not common to watch women race the same event on different days, and although Kristof considers this as the formula of success for women’s racing, he thinks it will not be easily adopted by other major competitions. “It will be difficult to see the women racing the Ronde van Vlaanderen the day before the men because the sportive event usually takes place on Saturday, and the organizers will not want to lose that source of income”, he said.

Either with the two races taking place on the same day or not, on weekends like those Kristof spends the full day covering the race, and it takes him almost the whole night to get through all the pictures. Almost a week after the race, he was still cleaning the cameras, so one can say that he will remember this edition for a long time, for better or worse.

In the meantime, he is already planning the next season, with new clients and challenges. Aware of his present and future workload, he started looking for someone to do some backup shooting so he could reach more places, which would benefit his business and the clients he works for. If you are alone and decide to be on the motorbike, it is highly possible to lose track of the peloton and play catch up during the rest of the day, so Rhode came in and he quickly integrated himself with the way Kristof works.

Together with him, they will continue covering women’s racing, even if it doesn’t offer the best return on investment yet, and covering men’s racing doesn’t leave room for much more.

After those two weeks full of emotions, he realized that he may have already done everything that he thought was possible in the cycling world. This sensation of “what now?” is what is driving him to search for new challenges, trying to go even further. He has his own agency, and like every person who establishes a new project, his goal is to build a business that can sustain itself, so that Kristof can focus on his own things.

“Right now the cycling calendar dictates my day-to-day, but within five years I want to be doing my own projects. Shoot just the stuff that I want to shoot and find new formats and platforms where I can then share that work”

He has his eyes set on publishing a photo book in the near future, and he estimates that it could see the light in 2023. From then on, he plans on continuing doing his own projects for prints, expos, and more.

Kristof considers that it is necessary to always work towards a goal. He also strongly believes in the concept introduced by Gladwell about the 10.000 hours needed to achieve true expertise in something. He was obsessed with photography for years, which was crucial to acquire the knowledge and skills needed for the job, with technical things becoming intuitive over time.

“There are a lot of shooting techniques, like slow or fast shutter, open or closed aperture… But I don’t have to think about it anymore. If the lighting changes, I set the correct settings without even realizing it”

In the past, he was a TV director and doing great. He started being passionate about photography, but his camera gear was very basic. He had to invest a lot of money just to start things, but within a year it already showed to be worth it. That is what Kristof calls “a jump”, and he encourages us to make choices like that one more frequently in our career or personal life.

“If you overthink it, many times it is too late. I know it is a cliché, but when you are close to death, what you think most of is about the things you did not do. You will have no regrets if you at least tried, so do it”

Kristof will continue being present in most cycling events for a while and being a reference for a lot of photographers. Nonetheless, after getting to know him better, we would not be surprised if we suddenly find him doing unrelated things, always guided by the intuition that has allowed him to be in the privileged position that he is at the moment.

It seems like yesterday when we were writing about gravel…

There have been a lot of historical races in the…