Kilianboy is behind the painting of some well-known steel frames we all have in mind. Paint is the first thing that impacts us of a bike, more and more customers want something unique, something custom, and Kilian knows how to materialize it.

We had an interview pending for some time. We want you to tell us how and when it all began to take shape. Who we now know from those spectacular painting works, how  did the idea of dedicating himself to painting bicycle frames appear?

You have to go back a few years, when you are young you work at everything, as much as you can, in my case from making chips to bartending in discos, until I started to stabilize when I started working with my father in the textile sector, first in the clothing distribution facet and ending up working in design (streetwear, hip hop clothing, skateboarding), but in 2010 the company closed down. I tried to continue with what I was doing, but I couldn’t get into design work. Looking for a way out, I took a two-month course in car works, but I hardly learned anything… By then, even now, I really liked motorcycles. I was interested in the ‘custom’ world, especially the ‘metal flakes’ but I had no idea how to make them.

At that time I got hooked for radio-controlled cars, which customized their bodywork. I designed it, painted it and then sold it on ebay. The so-called “Mini Z” was very new, and I already started with the airbrush. The fixed scene arrived, and I decided to paint mine… terrible… (laughs). Soon after I met Simon, at that time he was the owner of My Beautiful  Parking, he liked my tests with the glitters, and he proposed me to collaborate with an event they had with Pull&Bear in London, a roller race, I painted two frames for that event.

That’s how I started with bikes, I tried to get into the world that I liked that were bikes, but they started the bikes a la carte, the customizations… I tested, painted and learned, in a self-taught way. I always wanted to apply what I saw in the customization of the motorbikes to the bikes, it was about to explode.

Would you change anything about those beginnings now that you’ve lived through it?

When you go from working for a company to being self-employed. I had the opportunity to set up a workshop, but I bought equipment instead: paint guns, a plotter… The money was gone and I couldn’t end up buying a workshop, that I would have changed.

People are aware of all the work and expenses involved in customizing bicycles… Do you think it’s worth it?

Sometimes it’s not valued, and it’s logical, people don’t know all the work behind it. Sometimes I think… why did I get into this? For example, today I made a frame where the client asked for many things in particular: logos in a certain way, silver leaf… they ask for very complex things and I never know what to say no to, I know it’s possible that it could go wrong but I still do it. Sometimes it’s very difficult to explain how complex it is technically, in steel bikes it’s especially hard to do. For example, if you varnish many times you lose details, it’s a technical challenge that doesn’t happen in carbon bikes or for example a motorbike tank.

When you see the recognition you have, do not you think you could expand your horizons? Say, bet on it and be a reference in the sector. You have worked for the two most famous builders in Spain and recognized worldwide (Legor, Belle)! Believe it.

Yes, I think so, but it is complicated… sometimes I have thought of going to another country where there is a larger market. But I find it difficult to value my own work, as you say… believe it, but it is difficult to adjust the price since each job is different and requires additional preparations… to put a fixed price is almost impossible, it is not easy to plan. Besides, it’s a sector where a lot of copying is done and there are a few haters.

For me perfection does not exist, I am self-critical and I always do my best, but I am not perfect, whoever says that in the world of painting…

We encourage you to think about it, bet on it, for example in social networks. Bicycles like the A.T.E.R, have worldwide repercussion and have been in many media.

Works like that I like a lot, you have more freedom, but the truth is that I do not have much time to see the impact I get. You have to keep up with the trends but I prefer to try.

Speaking of trends, many of the techniques and paintings that already existed such as fluor, chameleon… are coming back, lack of innovation?

In bicycles, styles have returned and others have gone from custom (motorcycles) to bicycles, such as marble, which by the way, I didn’t know there was a specific paint for it when I started doing it. Now varnished chrome stickers are very fashionable. It sounds cliché, but everything comes back, it’s something cyclical.

Dawn, one of Christian Meier‘s gravel bikes, I’m very proud of that work. Oddly enough, that bike has been an “influence” for some brands.

Precisely the gradients of that bike, I was able to apply them so well thanks to what I learned at a meeting of painters organized by Cole Coatings, where we exchanged materials and techniques, it is a reference. The best ones for me are Cole Coatings and Jack Kingston.

With so many changes since you started… Where do you see yourself in the future? Is it open?

I would like to set up something, a workspace where I would have the painting part, but that would be dedicated to something much bigger, a cycling space. It’s not good to work with only one person, but I would like to work on something big with Kico (Bellé), for example.

Also to set up a virtual painting workshop, where people could subscribe and receive training, that also appeals to me. 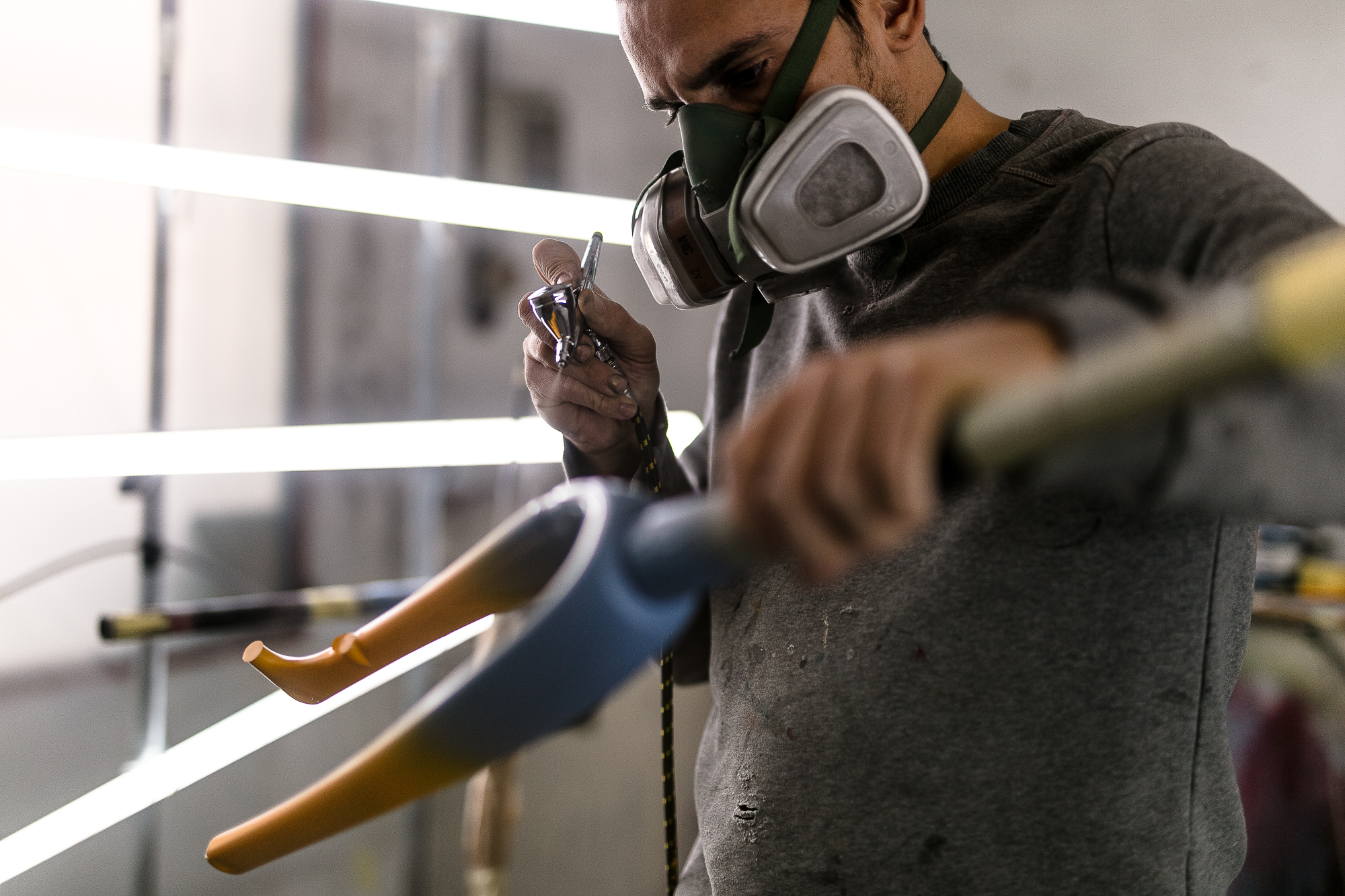 Squid Bikes, established in Sacramento in 2014, is one of…