The exponential growth of gravel and the fact that this category shares part of its DNA with the road make it more and more sense to have the opportunity to have a single bike that allows you to enjoy both disciplines. For this reason, many brands are already putting a lot of resources into it, recognizing the all-road as one more category in their product portfolio.

The Belgian firm Ridley, renowned for its history in professional road cycling and its contribution to cyclocross, including 21 world titles, has recently presented the GRIFN. A new all-terrain bicycle, conceived and designed to perform flawlessly on the road and gravel.

Ridley’s new model, named GRIFN (a creature with the body and legs of a lion, and the head and wings of an eagle), is not only prepared to tackle gravel or road routes, but also provides countless possibilities in terms of settings and accessories.

The frame, made of carbon, has a geometry focused on stability and comfort, combining the performance of a road bike and the composure of gravel. It comes mounted with a BB86 bottom bracket, slightly lower than the Kanzo Fast, and you have the option to choose between one or two chainrings.

The GRIFN has a tire clearance that allows the use of tires up to 40mm in the single chainring version, and 38mm if we use a double chainring. The maximum is 32mm in case of equipping fenders.

The integrated bar and stem assembly have been designed for more comfort and control by lowering the drop height and giving it a bit of space. At the same time, they have preserved the aerodynamic character and its total integration that allows us to have the entire front part free of cables. 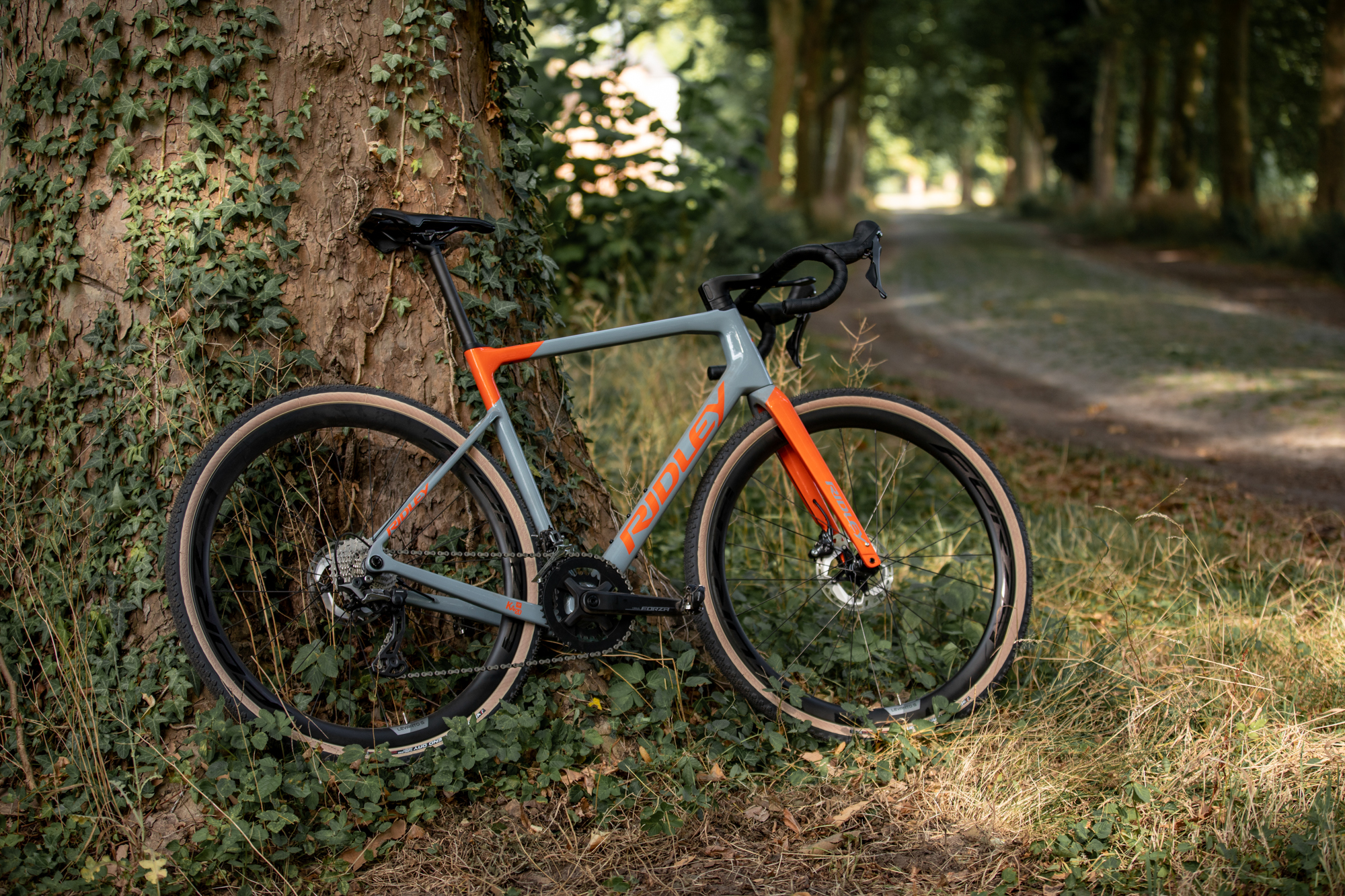 Just as they did in their Kanzo Adventure, they have added extra screws to be able to mount the bottle cages in different positions depending on the setup that best suits us for each situation, with the possibility to carry two bottles in the inner triangle of the frame and another under the diagonal tube. In addition, it has two other screws on top of the horizontal tube (camouflaged by rubber trim) to be able to use a bag or other accessory, fixed directly to the frame and with quick access while riding the bike.

Continuing with the extras, the frame is also ready to install the cables for the dynamo-type lighting system internally without messing with the aesthetics of the bike, in addition to the option of using mudguards on both wheels. All in all, you can use the bike for either your regular bike rides, as the tool for your next bikepacking adventure, or as your commuting means of transport in more urban areas. 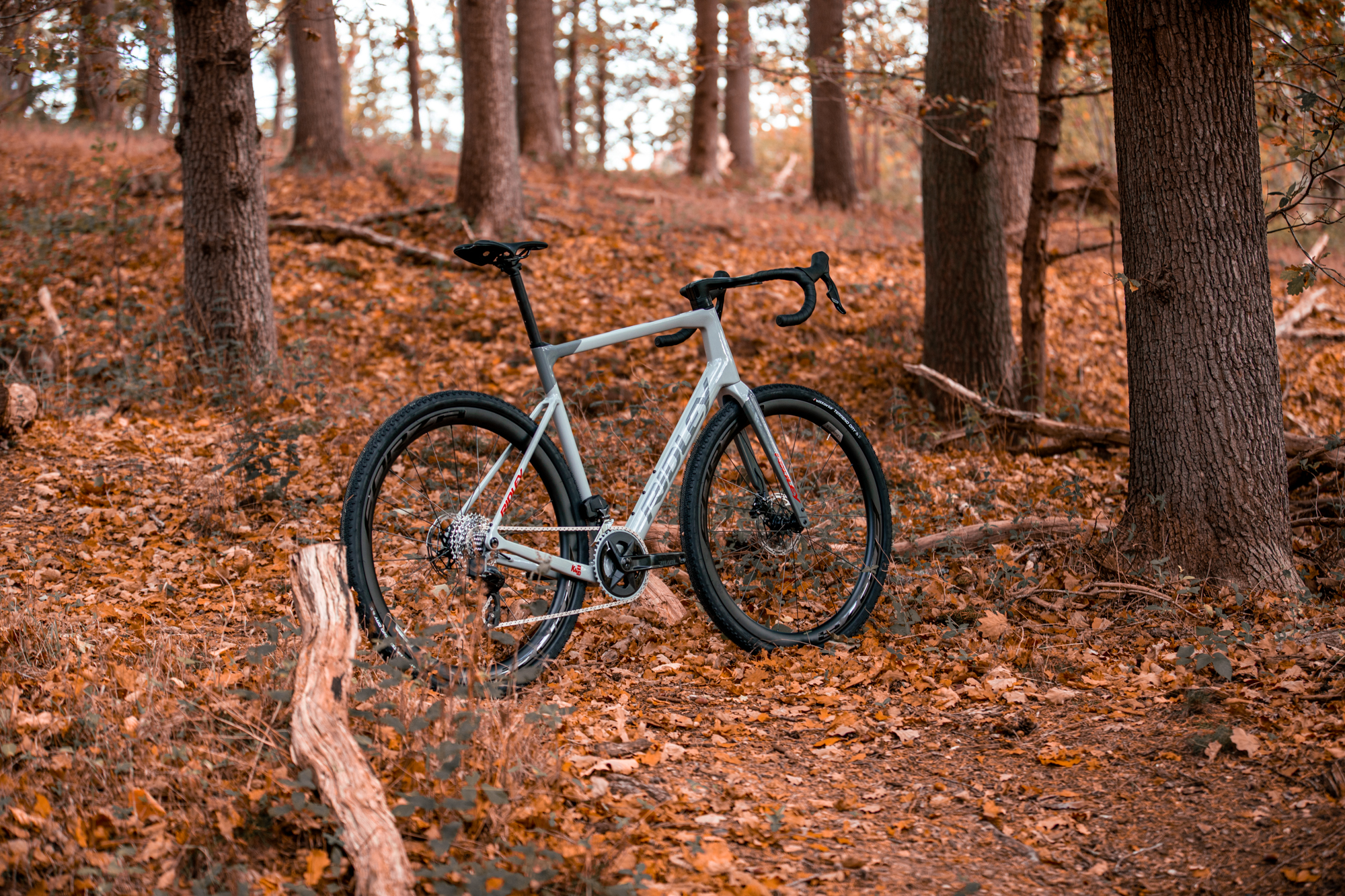 Last but not least, when choosing the setup for your GRIFN that best suits your profile, you can choose between a more road option with Shimano 105 or 105 Di2, or the gravel version with Shimano GRX600 or GRX800. Another important detail is that all their available assemblies incorporate the universal UDH derailleur hanger, which is used by more and more bikes and makes it easier for you to find spare parts in most stores around the world.

We had the opportunity to travel to Tenerife to see the GRIFN in the first person and test it on different terrains on the island. The first impression when having it in front of us was very good since, regardless of the geometry differences, its design reminded us of the Adventure model that we tested a few months ago and with which we enjoyed a lot. 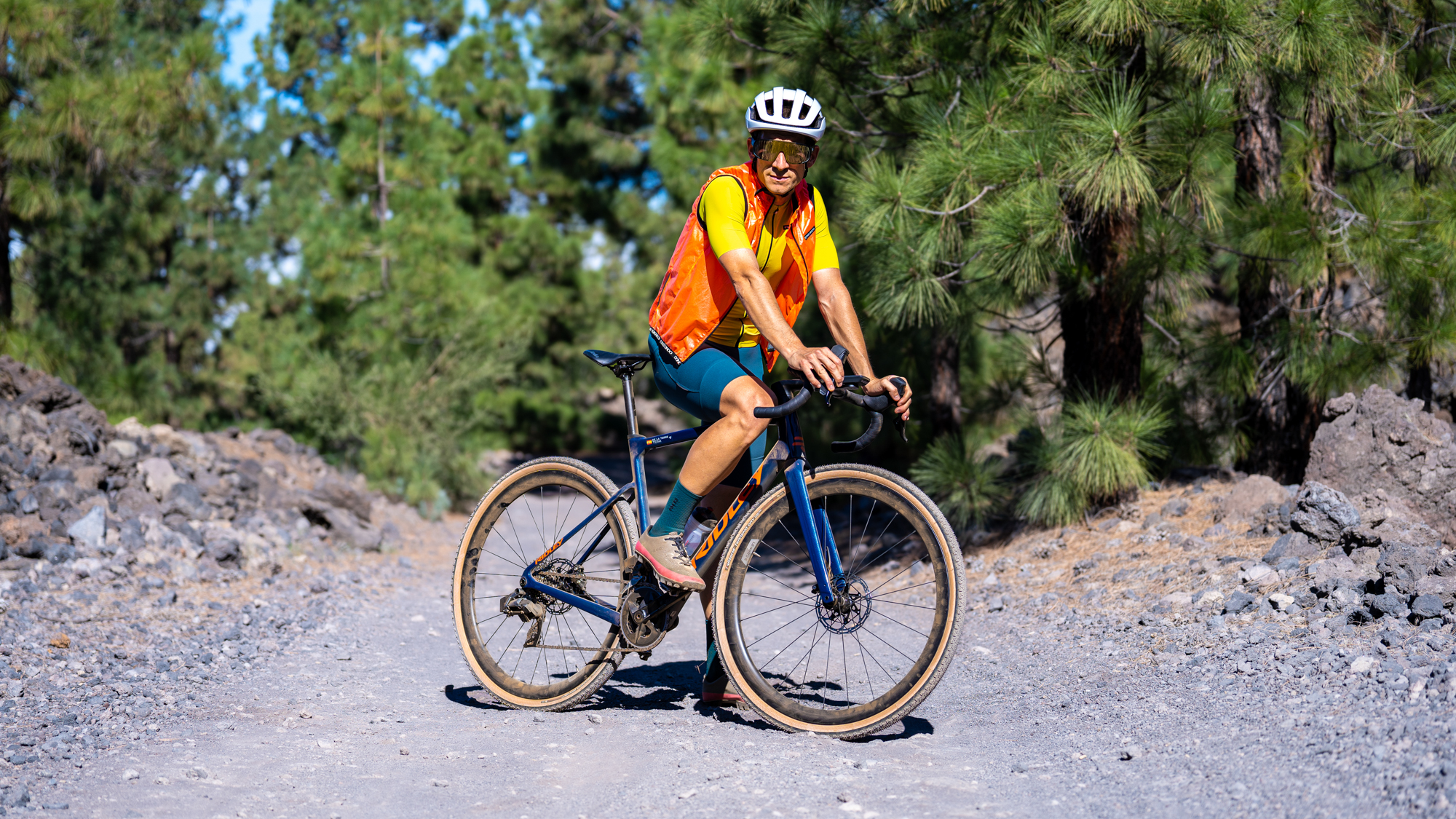 After a brief presentation of the bike by the Ridley team, we were given the unit that we would test thoroughly during the day. We were eagerly waiting to see how it reacted on tarmac and gravel, and to see if reality fulfilled everything that we had been told a few hours before.

We spent the first part of the day riding around Mount Teide, where we found all kinds of surfaces. It is amazing how in just 25 km we were able to come across perfectly settled tracks, gravel, roots, wet areas, leafy forests, mountains of volcanic stone… If the objective was to test the GRIFN in all possible scenarios, by choosing that destination we managed to do it.

As for our sensations, we honestly say that on gravel terrain we were pleasantly surprised. The position on the bicycle, similar to when we ride on the road, allowed us to ride at high speed. The tire width was ideal, considering it is not a pure gravel bike, and with the right air pressure we could confidently descend at high speeds. Regarding the climbs, it is clear that they have tried to find a balance between stiffness and comfort, but when facing a climb the bike responded reactively and with the feeling of not losing many watts along the way.

Late in the afternoon, we changed locations and went on to test the GRIFN on the tarmac. Our feedback from the first part of the test was really positive and it was time to see how it behaved on the road.

Already from the first pedal stroke, we could appreciate that the position on the bike is more of an endurance type in which the cyclist is more relaxed, comfortable and without pretending to beat any KOM. The bike continued to behave really well and everything was in line with what they told us. In addition, the option of mounting wider tires (in our case 32mm), provided us extra comfort and allowed us to face segments in which the asphalt is not in very good condition without hardly caring.

Obviously, if you are a climber or you are looking for high performance on the road, this may not be your bike because it is not designed for it. However, we have to acknowledge that the Ridley engineering team has managed to find a very balanced intermediate point that allows you to enjoy both disciplines with a single bike.

With extensive experience in the sector (building bicycles since 1977), Ridley has managed to maintain its essence as a family business despite the rapid evolution of the market and the massive influx of investors who step into the cycling industry.

The brand, which for many years has been a great promoter of cyclocross, recognizes that for some time now the rise of gravel has been giving an important turn to its production of bicycles. Looking back, cyclocross bike sales were 30% of their total, while today it is 1%, most of it related to racing. On the other hand, the gravel discipline has become the big dominant, reaching 46% of the brand’s total manufacturing volume. 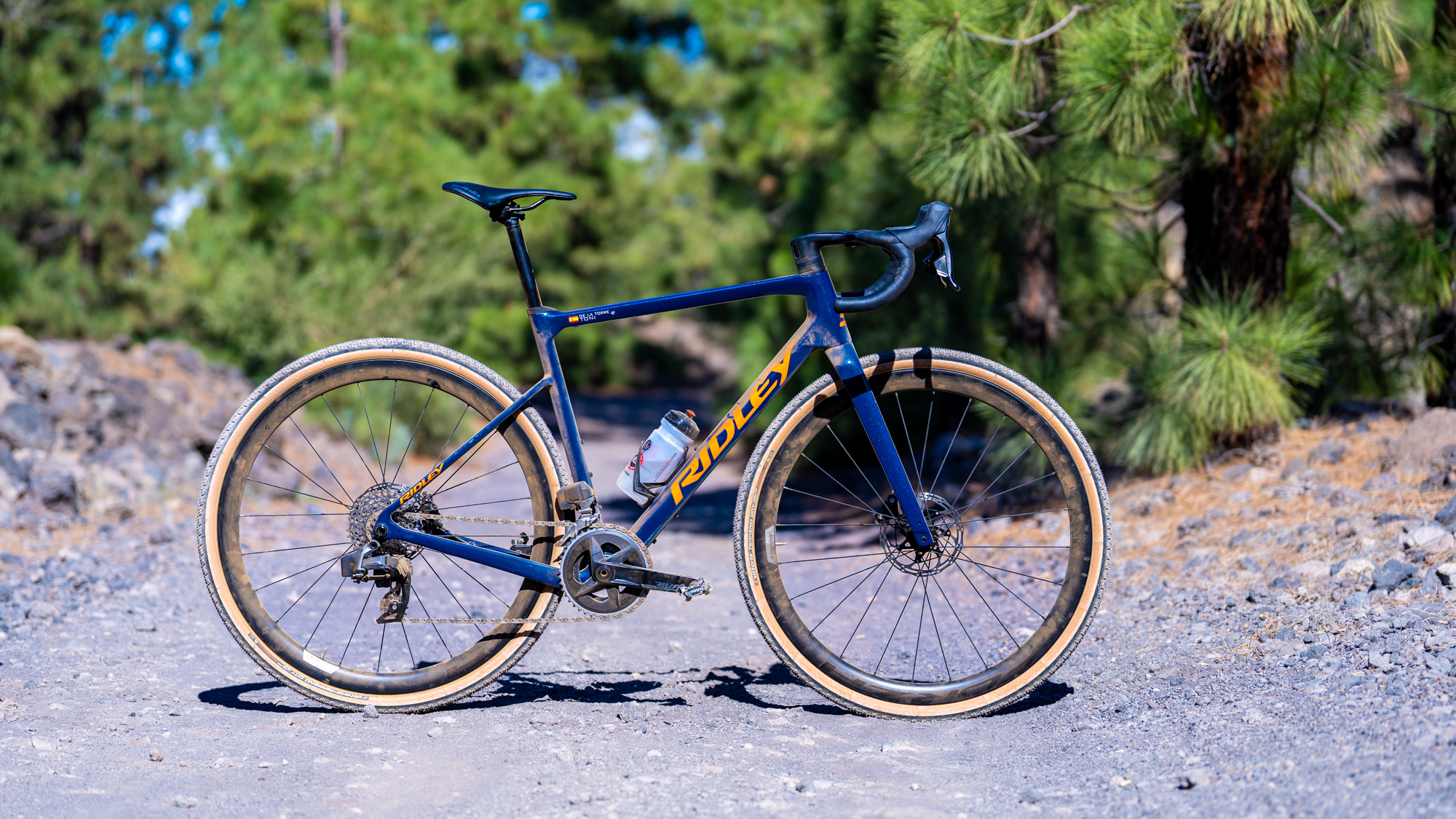 These numbers go to show that the brand is doing things really well and offers bikes that are great value for money, and with the introduction of the GRIFN they are reaffirming that position. If there is a definition of all-road, this new Ridley model comes very close to it.