Coming straight from Colombia, and meeting in Barcelona for a coffee during a spring afternoon, ​​the guys from La Vuelta es Así told us that their next stop would be the Giro d’Italia 2022. After their stay in Europe, they joined the Vuelta a Colombia 2022, covering it from start to finish as official media. Now, coinciding with the end of the Giro Rosa, and after taking a look at the excellent photographic material of the Italian race, we consider it is a good time to recall this story. 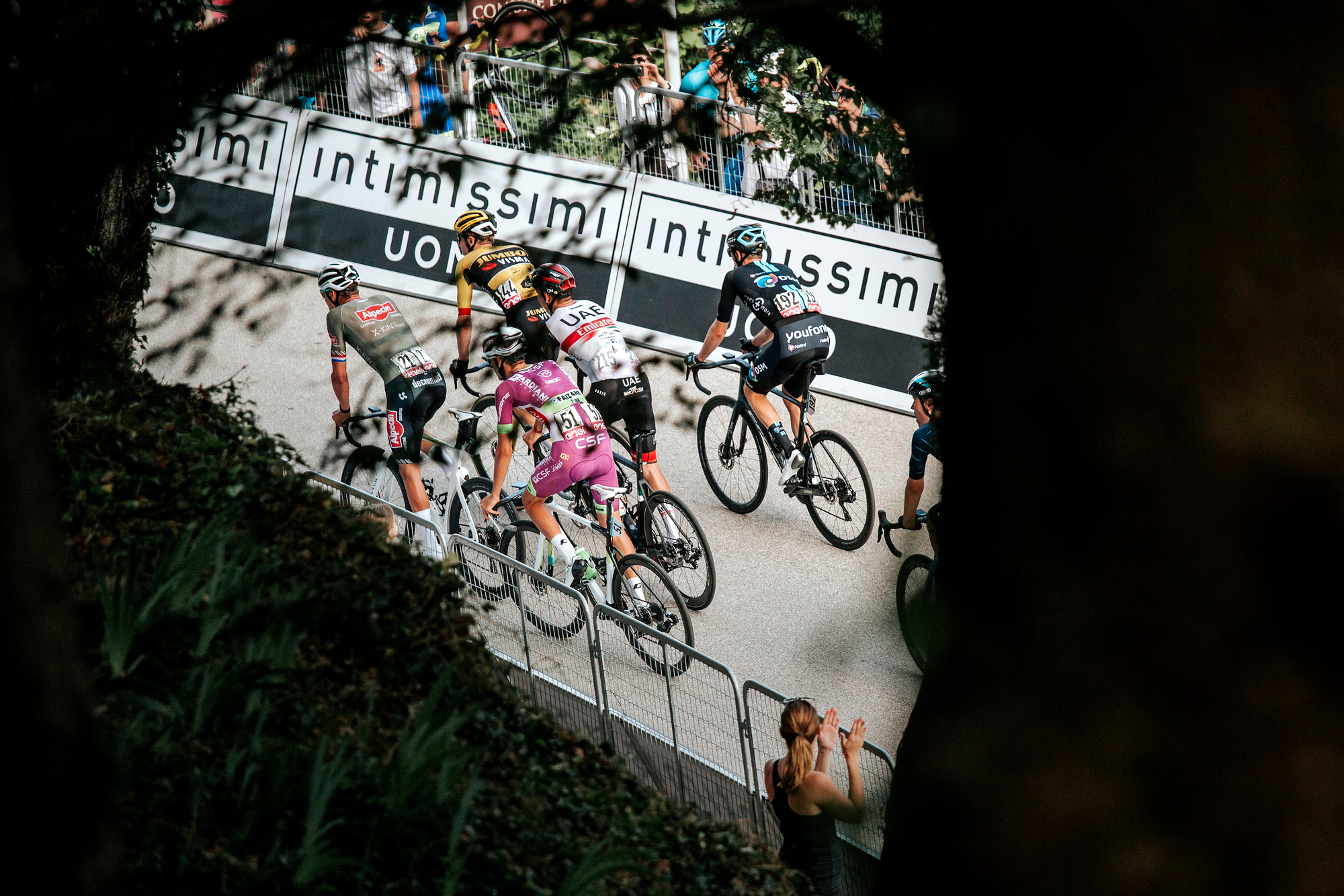 Although they had not obtained official press passes to be able to attend those places reserved for journalists and photographers, the motivation of the team to cover the event did not fade away at any time. They had crossed the ocean, booked hotels, rented a car, and the race day planning was already perfected. They already knew which would be the most accessible and spectacular spots, with which everything was ready to live an adventure from the outside but at the same time in the middle of all the action.

The three professional photographers Cristian, Mateo, and Rubio started their project La Vuelta es Así in 2021 with the idea of ​​capturing the purest essence of women’s and men’s cycling in Colombia. This time they got out of their comfort zone moving to Italy, where the first of the three Grand Tours would take place, in order to attend an event of this magnitude in first person from the point of view of a fan and photographer.

The first stage they attended was the sixteenth for the riders, an acid test climbing the magnificent first category Mortirolo pass. Surprised by the whole atmosphere, the three of them had their nerves on edge and did not know how to act. The fans invited them to set the cameras aside and start cheering the peloton, but at the same time they wanted to take photos of everything that was happening. It was a progressive learning experience in which they ended up acting as photographers and supporters surrounded by the passionate atmosphere around the race. 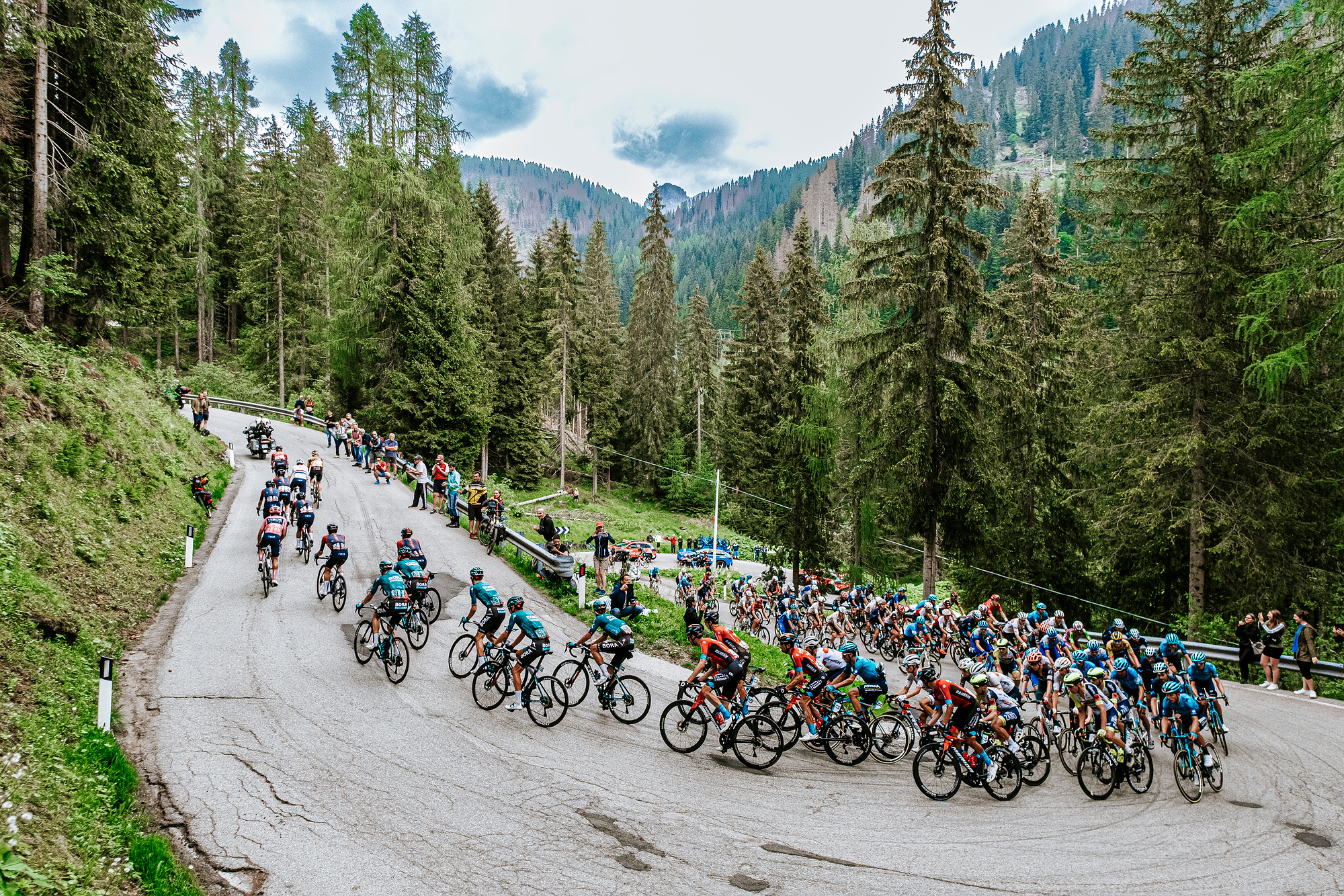 The fact of not being recognized as official press could have been a problem, since you can’t access places like the finish line. However, that made them think further to look for those spots out of the ordinary. They traveled by car from point to point, always trying to cover two points of the race, with a mountain pass and the finish line as an example. Once parked, with their cameras on their shoulders, pockets full of food, and bottles of water, they started walking to find the best angle and light. This allowed them to mingle with the Italian fans who, realizing they were Colombian, opened the doors of their homes to them, starting conversations and inviting them to eat.

Comparing it with Colombia, the three of them told us that the Giro is something that must be experienced and that runs through the blood of everyone. All supporters, regardless of their age or level of enthusiasm for the sport, are on the side of the road to cheer up and participate in the show. They dress in pink, decorate the streets, carry out activities, and stand along the entire course to encourage and watch a group of cyclists that pass in just three minutes. In addition to the Italian people, the landscape also matches the Giro, with flags, signs, posters, sculptures or buildings in pink, in a setting as amazing as the Dolomites of the Alps.

For them it was an adventure of six days full of emotion and hard work, moving non-stop from one place to another. This also allowed them to be close to role models of the professional cycling photography community and to see how they work closely. They tell us that they realized how demanding and intense this work is. Not only do you have to take photos, which already involves constant moving and thinking, but download and edit them almost instantly so that you can continue the next day after barely sleeping.

In the end, this trip has been an adventure for the group, an apprenticeship that they take with them to be able to continue in Colombia. They were able to put themselves in the shoes of the fan and the photographer who covers the race, having to think beyond what is normal to be able to cover each and every story. Cristian tells us that you acquire speed, ‘it makes you become very fine and precise in order to comprehend each situation and get the most out of each picture’.

The intention of La Vuelta es Así is to continue growing to show Colombian cycling to the world. This year, for example, they have already been part of the official press team of the Vuelta Colombia 2022, applying in their own country what they have learned in Europe Their idea is to tell those stories behind and around Colombian cycling to share them with the rest of the world and in this way take the local sport to the next level.