From the moment we came across the project “La Vuelta es así” (referring to the Vuelta a Colombia 2021), we were attracted by the perspective of the project and the proximity and ease with which they covered Colombian cycling. Because, if the country is known for something, is for its culture linked to this wonderful sport and its long history full of great riders and epic stories about cycling.

Behind this project, we find Juan Felipe, Cristian, and Mateo, three professional photographers with great talent, different backgrounds, and the same love for bicycles, who decided to join forces to show the purest essence of male and female cycling in Colombia.

“We believe in Colombian cycling culture and we consider it a great opportunity to talk about how it is capable of bringing people together” – Juan Felipe. 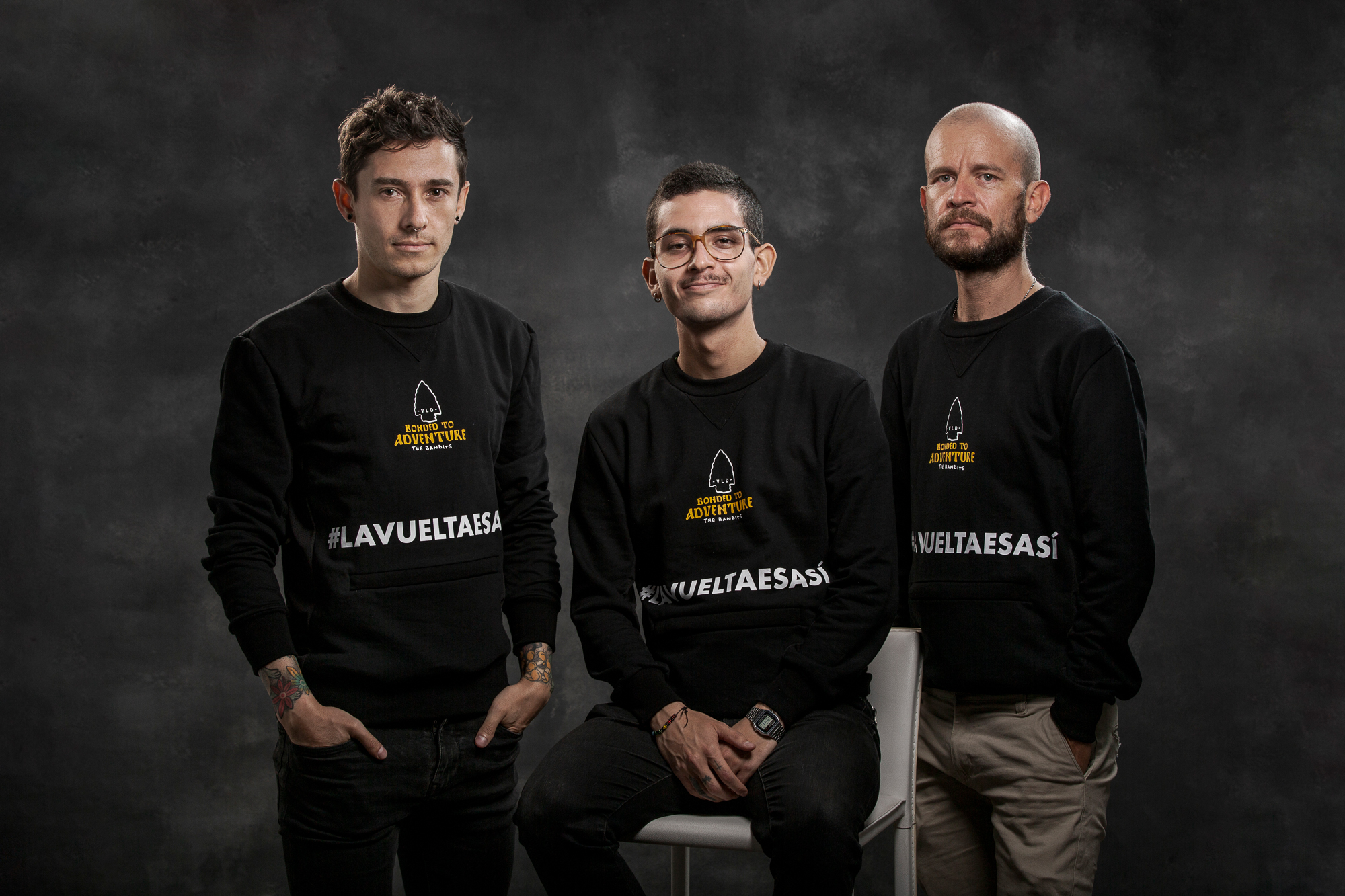 To document and narrate the competitions through their photos and videos from a more humanized and real point of view. To show the contrasts between large and small teams, not only in terms of physical condition and preparation, but also in terms of resources, opportunities, and sacrifices that had to be made. To portray the atmosphere felt in the squares and streets included in the different stages of the race, or to explain incredible stories of characters that in one way or another are linked to the cycling culture that the creators of the project strive for.

The name of the project is precisely the result of the need to tell things in a different way. They did not want to fall into the temptation of only focusing on the most important or successful teams, so they gave a say and visibility to the rest of the protagonists too. Being able to cover the real cycling and run away from the most commercial and perfectionist approach.

“To show the day-to-day life of these more humble teams, to say that many times the driver of a team’s official car is the same one who assists them at the feeding stations and that, possibly, he also ends up being the masseur because there are no more resources…” – Mateo

Although they do not deny that they would love to be able to live from the project in the future, the desire, effort, and enthusiasm they put into the work they do is undoubtedly a reflection of the satisfaction of doing something for which you feel a real passion.

It has not been straightforward for them to get access to the event since the Colombian Cycling Federation does not make it easy for photographers who are not from their circle of contacts to enter, and there were many obstacles that they had to overcome to finally be accredited to the Vuelta a Colombia 2021. Despite the different issues, they never gave up. They insisted and did not stop until they found a way that would grant them access. 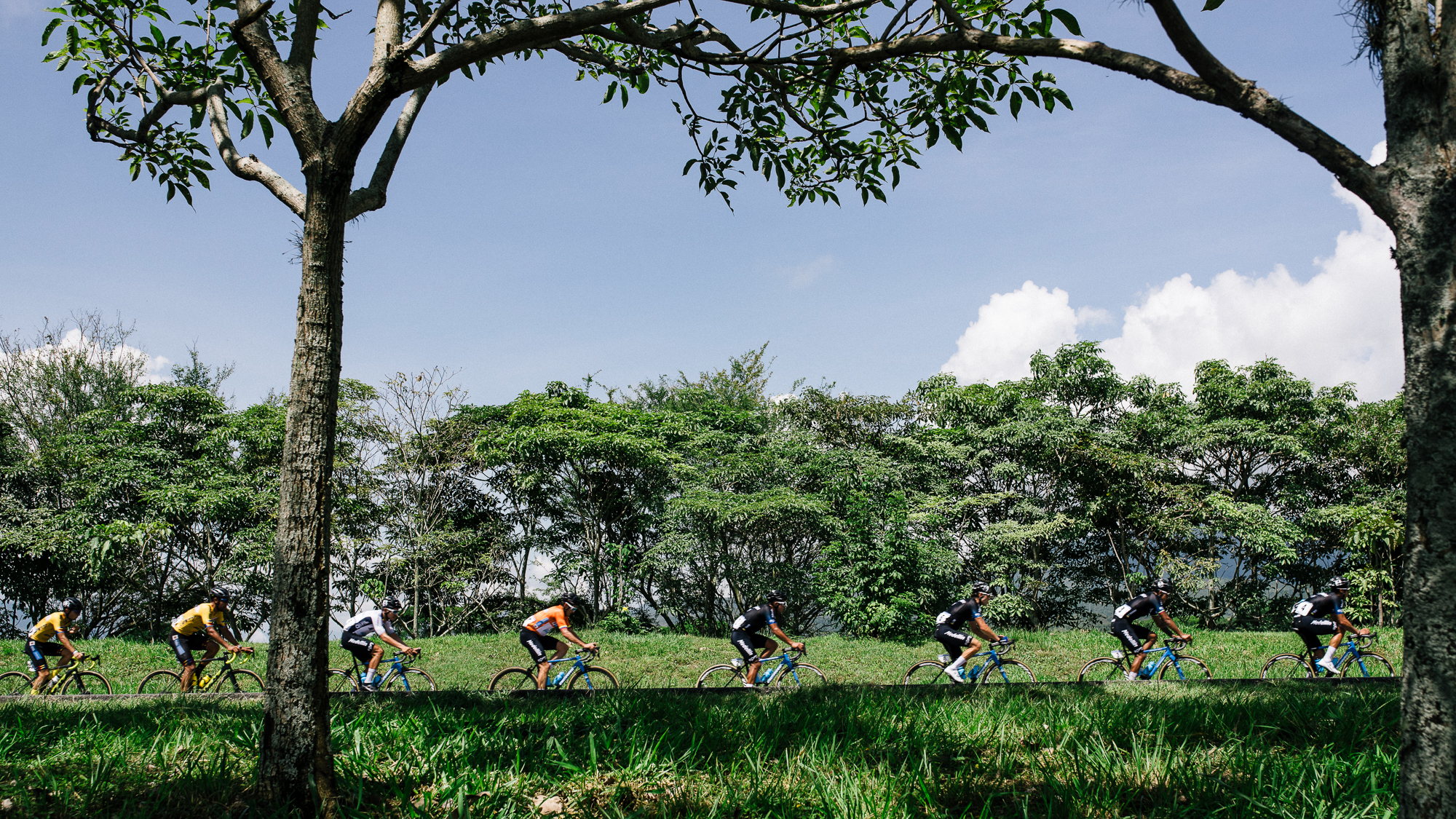 Juan Felipe and Mateo got a pass to be in one of the motorcycles and one van, respectively, both authorized by the organization. That gave them the opportunity to create content from within the peloton. Nonetheless, in the case of Cristian, he did not have an official vehicle, so he had to get by in other ways but, what seemed at first a handicap, turned out to be a success to have total freedom and to be able to cover all that neither Juan Felipe nor Mateo could get to.

“I moved around in several vehicles, managing the situation as best I could. We even made some deals with several teams in order to get to different places. I took photographs of them in exchange for them taking me from one point to another so that we could cover all the areas that we were interested in documenting. ” – Cristian

From the beginning, they were sure that they wanted to cover the event from a more narrative point of view and talk about everything that had never been seen before about this great cycling festival that takes place in Colombia.

“We wanted to give voice to incredible stories that we have had the opportunity to know throughout the days. For example, that of a man who has been going to the Vuelta for more than 30 years as a street vendor, selling miniature bicycles made with wire. ” – Mateo

The boys told us that the reception of both riders, support staff, and the public itself was incredible. People were aware of the fact that there was a team of unknown photographers inside the competition covering the competition day after day, and they were very supportive. In addition, thanks to the exposure that social networks provided them, when they were asked what media they were representing, many people had already heard about them and the great work they were doing.

“One of the things we take from this project is, without a doubt, the passion of all those people we came across. To have the opportunity to experience their suffering because of what it takes to be following an event like this but, at the same time, see the desire and enjoyment they feel when being involved with cycling and, especially, an event like. ” – Juan Felipe

In the case of the Vuelta a Colombia, unlike other competitions, we can find both well-known UCI Continental teams as well as local teams that, with hardly any resources, make a huge effort to take part in the race and contest each stage. For them, the race is an opportunity to show their talent, and they did not want to miss the chance. 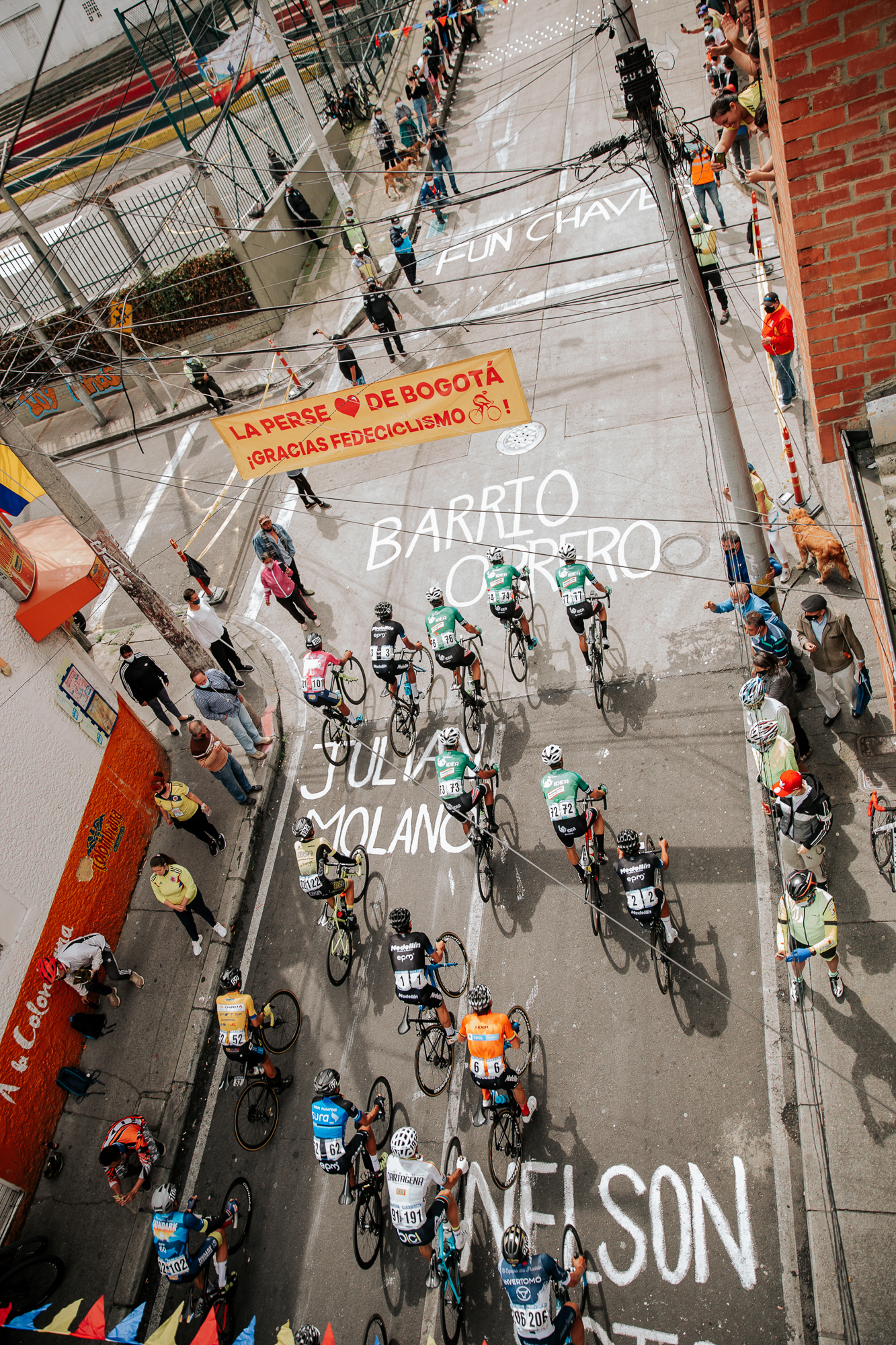 The contrast between some teams and the others was so remarkable that, while there were riders who had a bicycle to face each type of stage (flat terrain, high mountain, or time trials), others had to use the same and even share rollers between them. There was also the case of riders of tiny teams who did not have their own bottles or gels and raced with the equipment that larger teams gave them.

“Some of the team cars where the personal vehicle of a random relative, with just enough what was needed to assist the cyclists” – Mateo

From Colombia to the world

Another objective of this project is to show the world that Colombian cycling is in good shape and that, despite the differences that may exist with Europe, it is also a reference for the rest of the world.

The proof is in the great cycling talents who have come from Colombia during the last few years and that, to this day, deserve our full attention given their level and charisma.

It should be said that, despite the fact that this year the women’s version of the Vuelta a Colombia has not been held for health reasons, women’s cycling is also on the rise and there is more and more presence and the level grows season after season. 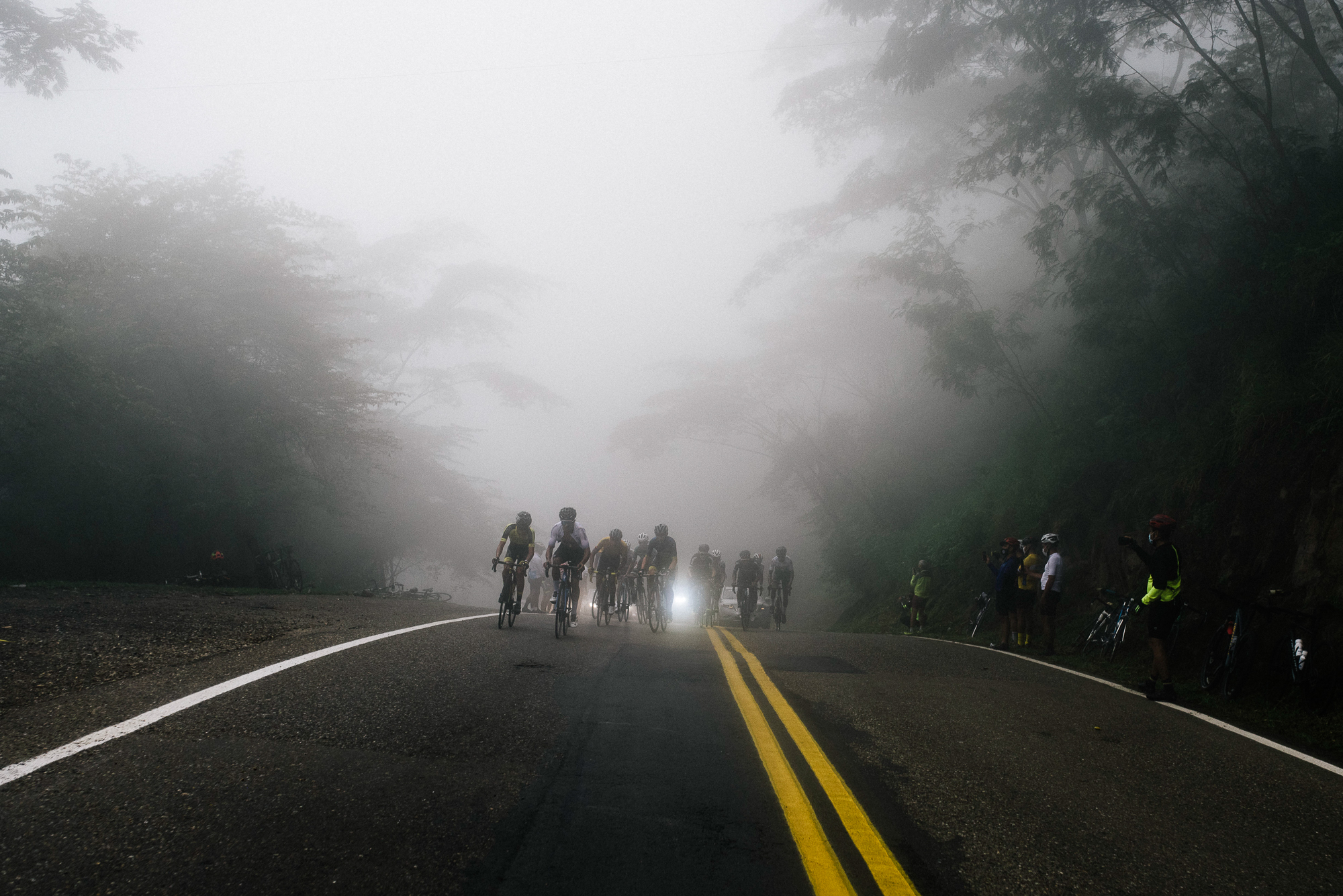 We really hope that Juan Felipe, Cristian, and Mateo can continue doing what they know how to do best, giving a say and exposure to everything related to cycling in their native country, something that we appreciate on the other side of the world.

“Before, I had the dream of going to Europe and covering the races there, but now I have more interest in telling what happens here, telling stories about the country and how cycling brings us together.” – Juan Felipe