Last weekend a new edition of The Traka took place in Girona, and it was very special for several reasons. First and foremost, the long-awaited return of competitive events, which allowed us to test ourselves again. On the other hand, we have pinned a number again, a simple action that nonetheless excited us after so many months of restrictions. And finally, the satisfaction of facing a new challenge in the long-distance discipline and finishing it successfully.

For this occasion, we were present in the first person together with our friend Ismael López, with whom we have already shared some adventures before (and many more to come). Although he has a lot of racing experience, it wasn’t until last weekend that he faced his first endurance test, The Traka 360. The event takes place mostly off-road and runs through some of the most beautiful places in the province of Girona, which was covered almost in its entirety after 360 km.

The great organization by Klassmark and its entire team, has been key to successfully carrying out an event of this magnitude, consisting of four races of 60, 100, 200, and 360 km spread over the weekend. All this is remarkable taking into account the global situation that unfortunately, we are still facing.

I had never ridden for more than eight and a half hours. Nonetheless, during The Traka I spent more than sixteen hours on the bike.

Everything was different. Used to preparing competitions of little more than four hours on the road, everything was new. Weeks before the race, I started managing everything I would need: bicycle, bags, tools and spare parts, food… I am lucky to be surrounded by people who, with a single phone call, did not hesitate to help me with the preparation process.

I spoke with Toni, who has experience in this type of events, and he gave me some really necessary tips to face a challenge of such a considerable distance. Let’s not deny it, in order to be able to ride the 360 ​​km you have to have everything under control, minimize risks, and have all the necessary to be able to fix any mechanical issues, or overcome a situation of physical and even mental crisis.

I had everything ready. At six in the morning and still in the dark, the longest version of The Traka began. A long day ahead of navigation in which we would end up accumulating almost 5,000 meters of elevation gain. 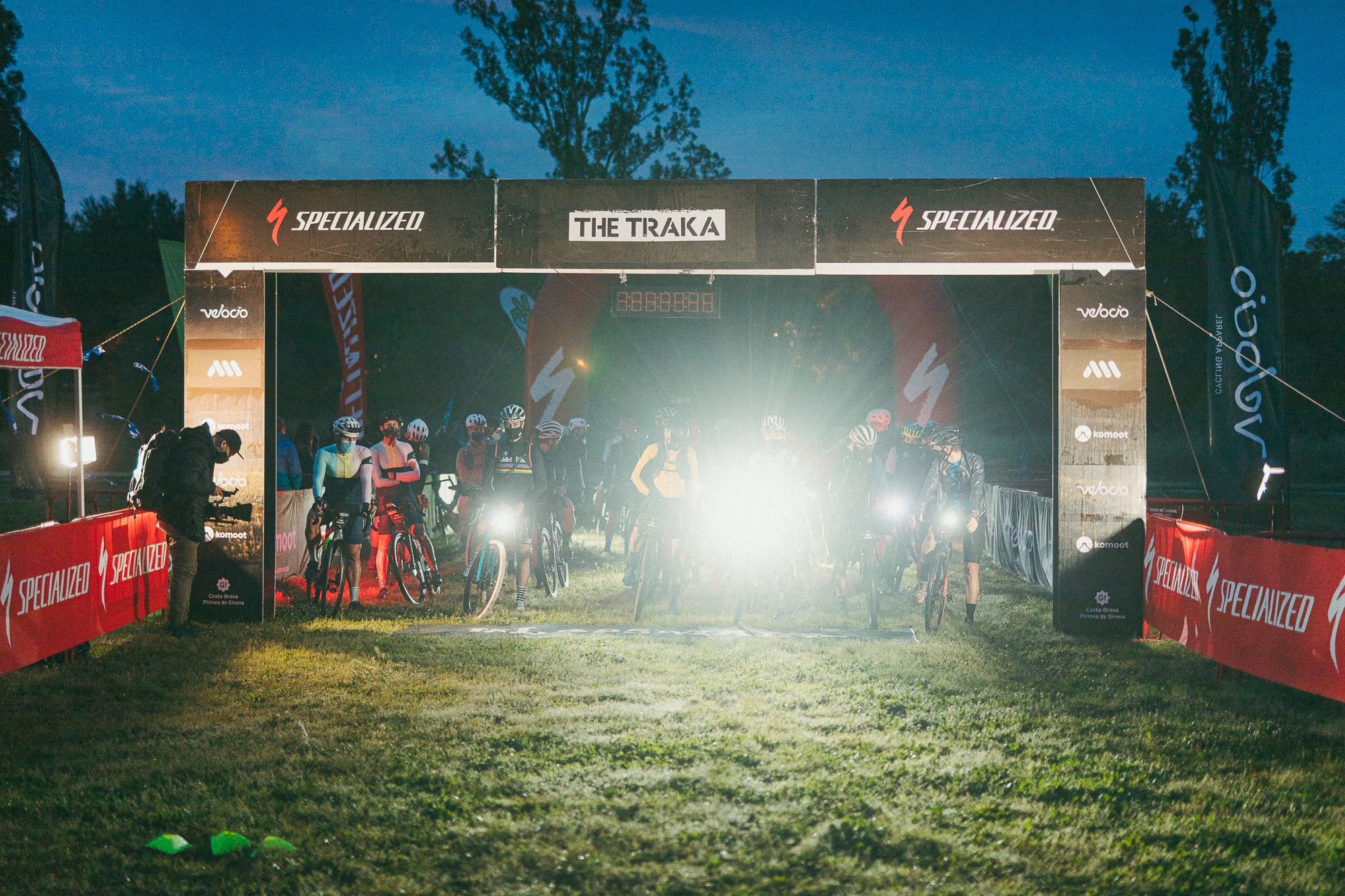 During the first kilometers, the group was still big and it was easy to be covered, but I decided to position myself at the head of the race to avoid risks, always relying on my navigation and seeing, first-hand, the terrain. I did not want failures or surprises, but everything had just begun.

Around kilometer 70, Freddy Ovett of the Legion of L.A. team decided to increase the pace at the start of a short road climb of just over two kilometers, which caused the first group to reduce to only seven riders. 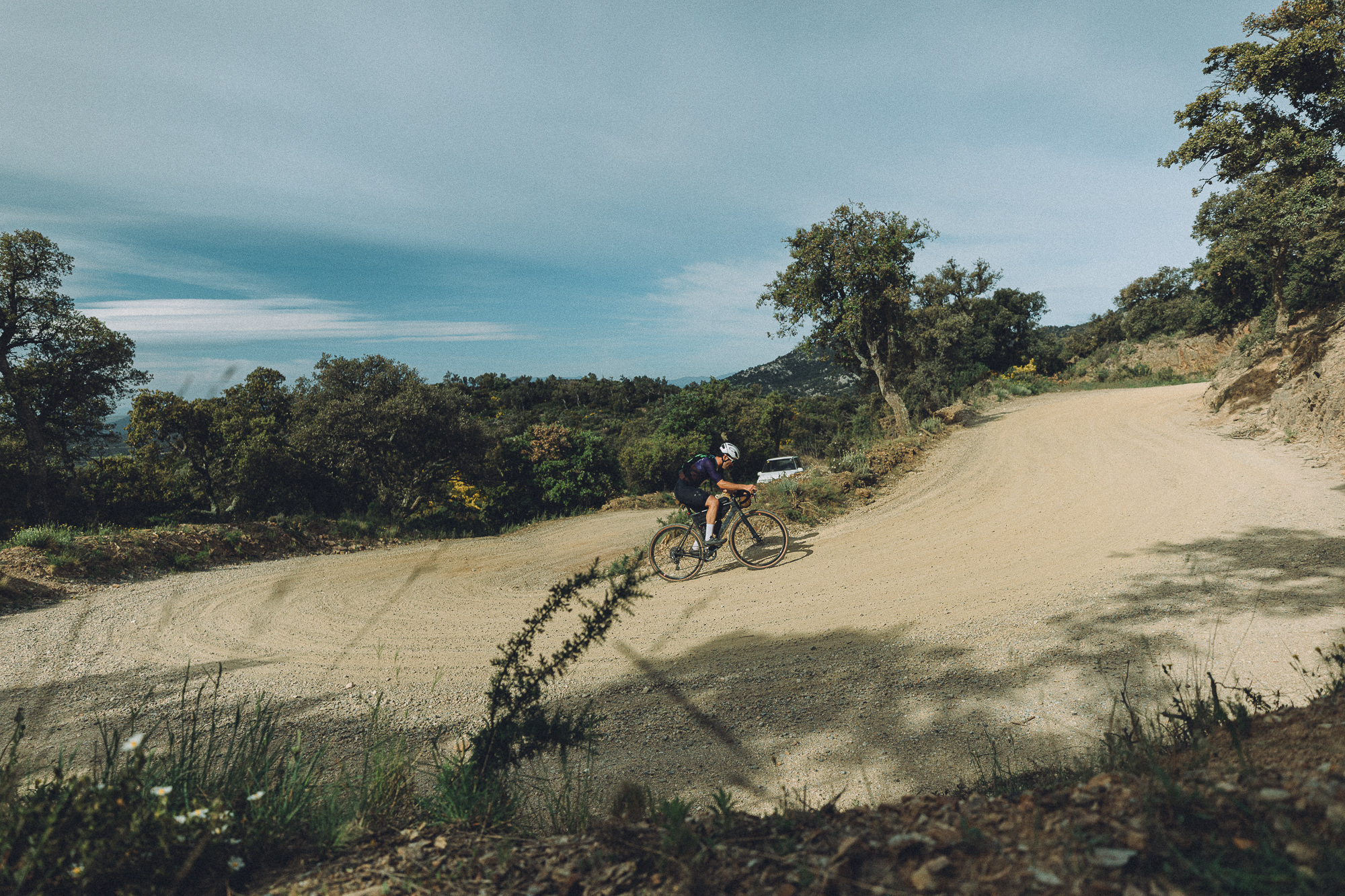 At kilometer 100, we came across the first serious climb, and there is where I realized I had to slow down a bit and let the lead group go. From that moment on, the real adventure began. We headed into the Serra de l’Albera in the direction of Cap de Creus. The terrain became more rocky and technical, so I had to be cautious to avoid a puncture or even worse mechanical problems.

As I write and review the track, I realize that at the top of the climb where I started to feel the pain in the legs there is a rustic villa called Mas Patiràs, “patiràs” being the Catalan translation of “you will suffer”. 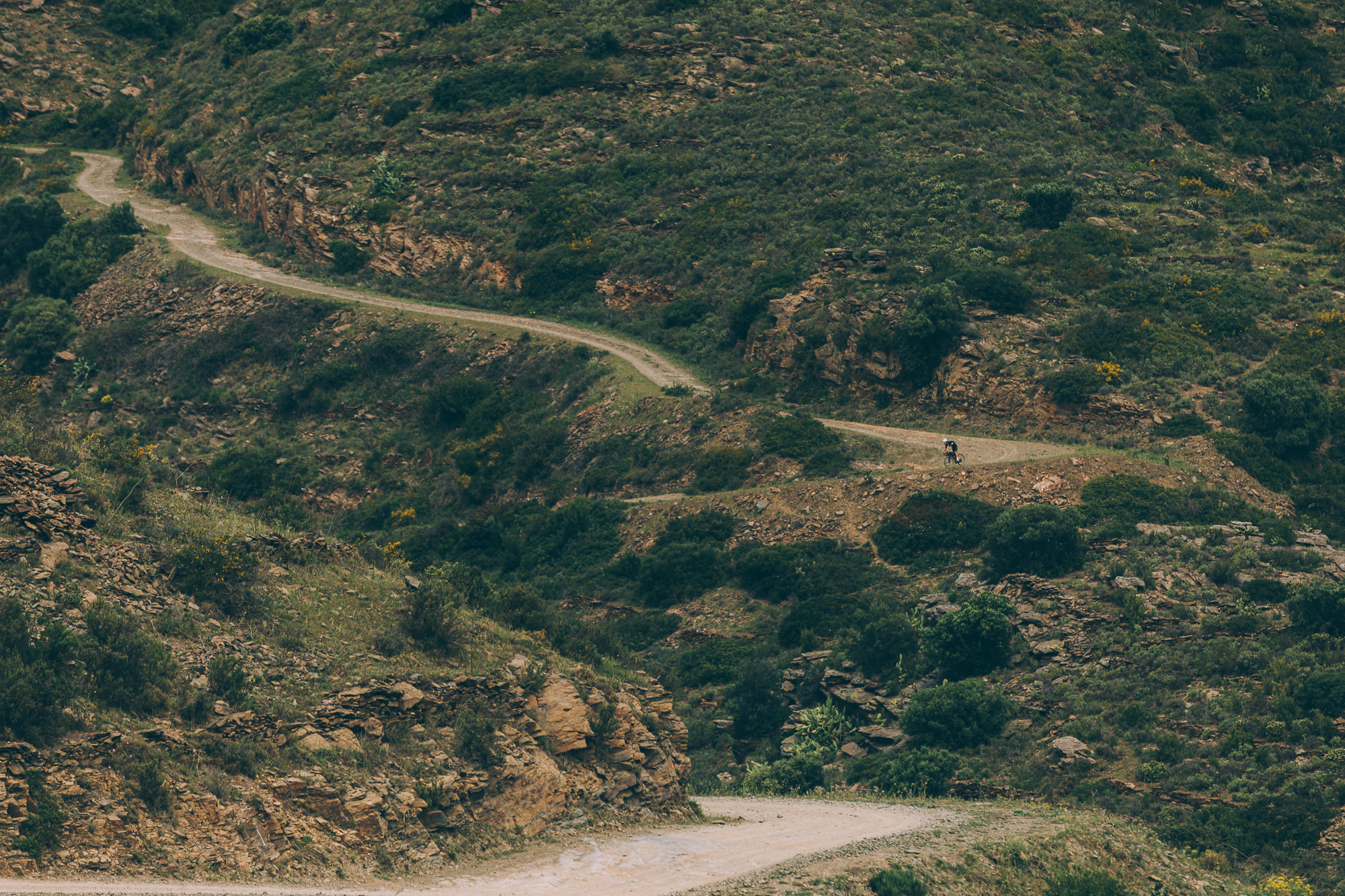 Around kilometer 125 I felt that the tank was starting to empty. I had to slow down and even set foot on the ground to fill a bottle with mineral salts that I drank in two gulps in order to avoid an imminent and feared bonk. Luckily, I managed to rebuild myself and headed towards Cap de Creus, reaching the sea through Llançà and following the coastline to Port de la Selva, and stepping into the natural park along its paths until we reached the emblematic town of Cadaqués. Once there, the route continued to Roses along the seashore, always side by side with the Mediterranean Sea. Without a doubt, those 40 km of tracks and paths were spectacular, with unique views that I would recommend to everyone.

We left the hilly area behind and we switched to a flat terrain full of fast trails that, with a touch of wind, were not entirely comfortable to ride in. Even so, I found myself fine trying to push as much as possible in order to discount kilometers, riding through Els Aigüamolls de l’Empordà, Sant Pere Pescador, l’Escala, Torroella de Montgrí and heading towards La Bisbal de l’Empordà to find the beginning of the ascent to Les Gavarres.

During the 8 kilometers of the “als Metges” climb, I had my second down moment. The gradients forced me to go beyond the desired effort. I felt like I was running out of gears, even if I had a 42 tooth big sprocket with a 44 tooth chainring in the front. There was only one option: squeeze whatever left there was in me and overcome that rough patch in any way. 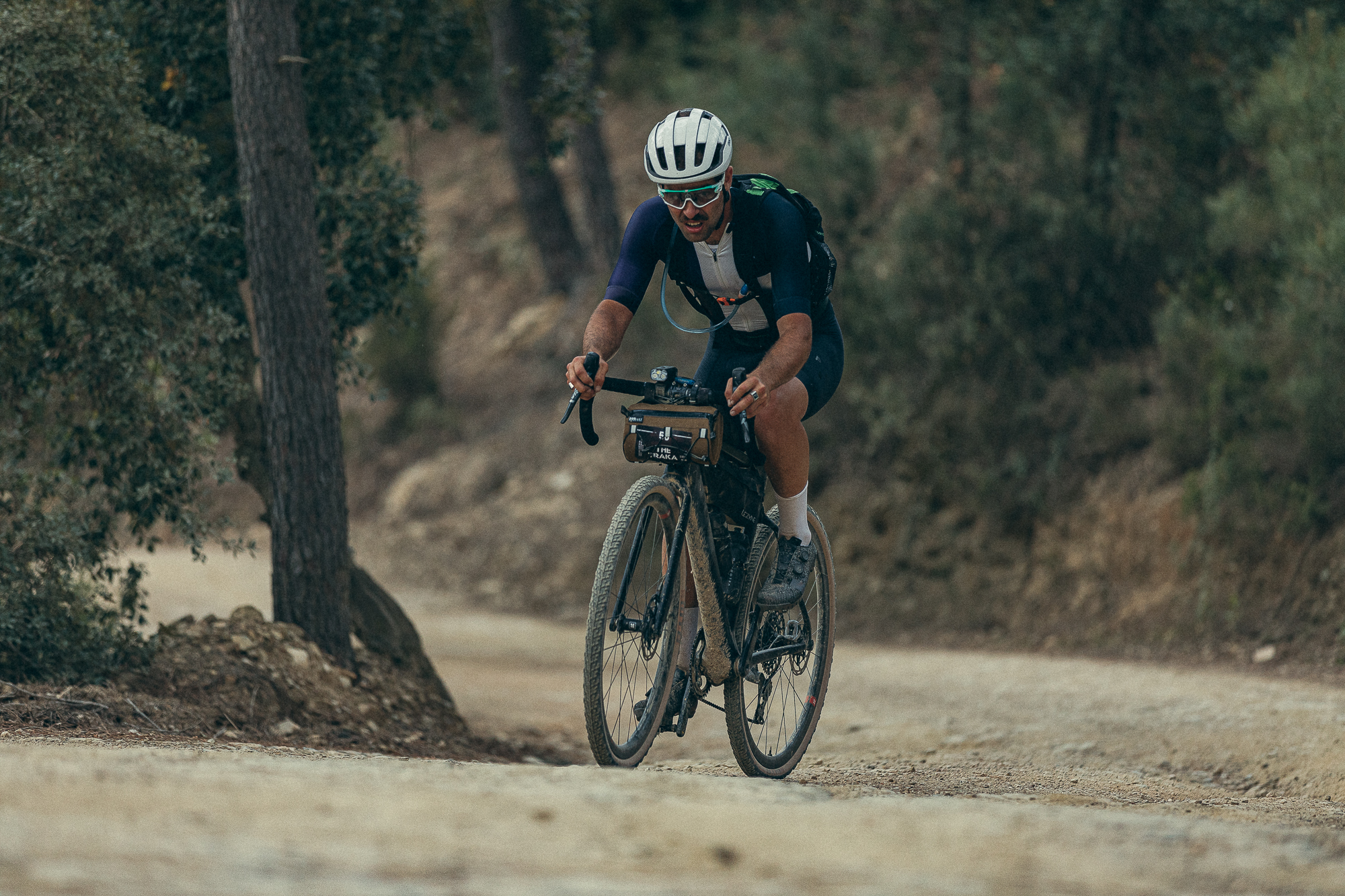 I managed to reach the top and then there were “only” 80 kilometers left to reach the finish line. I had two glasses of Coke and checked the profile of the last part. When I saw that there was a relatively comfortable segment coming up I suddenly felt refreshed, like starting the day again. The body was responding and I could feel again the power in my legs. The most difficult part was already behind me and it was time to finish the day in the best way.

It was time to turn on the lights and try to be more focused on the terrain in front. The reflexes were barely acceptable and any mistake could have big consequences. Nobody wants to have a problem at any point of a race, but at this point, with more than three hundred kilometers on the legs, any unforeseen event would have been a hard blow.

It was almost over and the desire to arrive was enormous. The darkness arrived, and some rides still had a few hours of riding ahead of them. It was 10:07 pm on Saturday when I finally crossed the finish line. 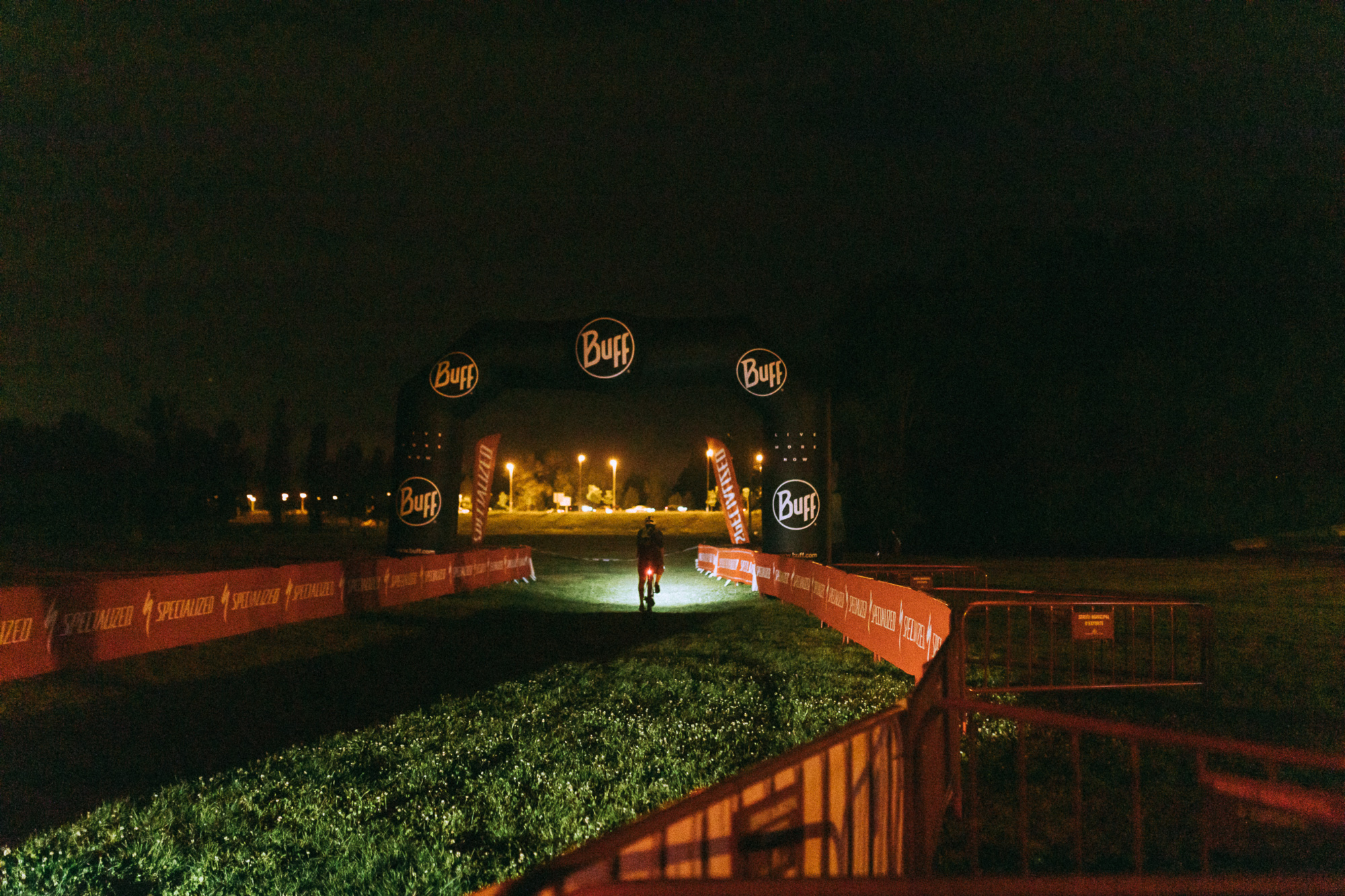 When crossing the line, Júlia and Albert, who had spent all day following me at different points along the route to document this story, were there waiting for me with a big smile. Our hug felt like glory. They are also heroes.

I would like to thank all those who have helped me in this adventure, especially Júlia, my partner, who has supported me at all times. To my friends, Brazo de Hierro who did not hesitate for a second to join me in this challenge, and to the chef Mario Martínez who, thanks to the varied and quality fuel that he carefully prepared, made was key to nail the nutrition plan throughout the race, something that my stomach will always thank you.

I would not want to forget about the entire Klassmark organization, with Gerard as the leader, who did, as they had already done in the past and will continue doing in the future, an excellent job. 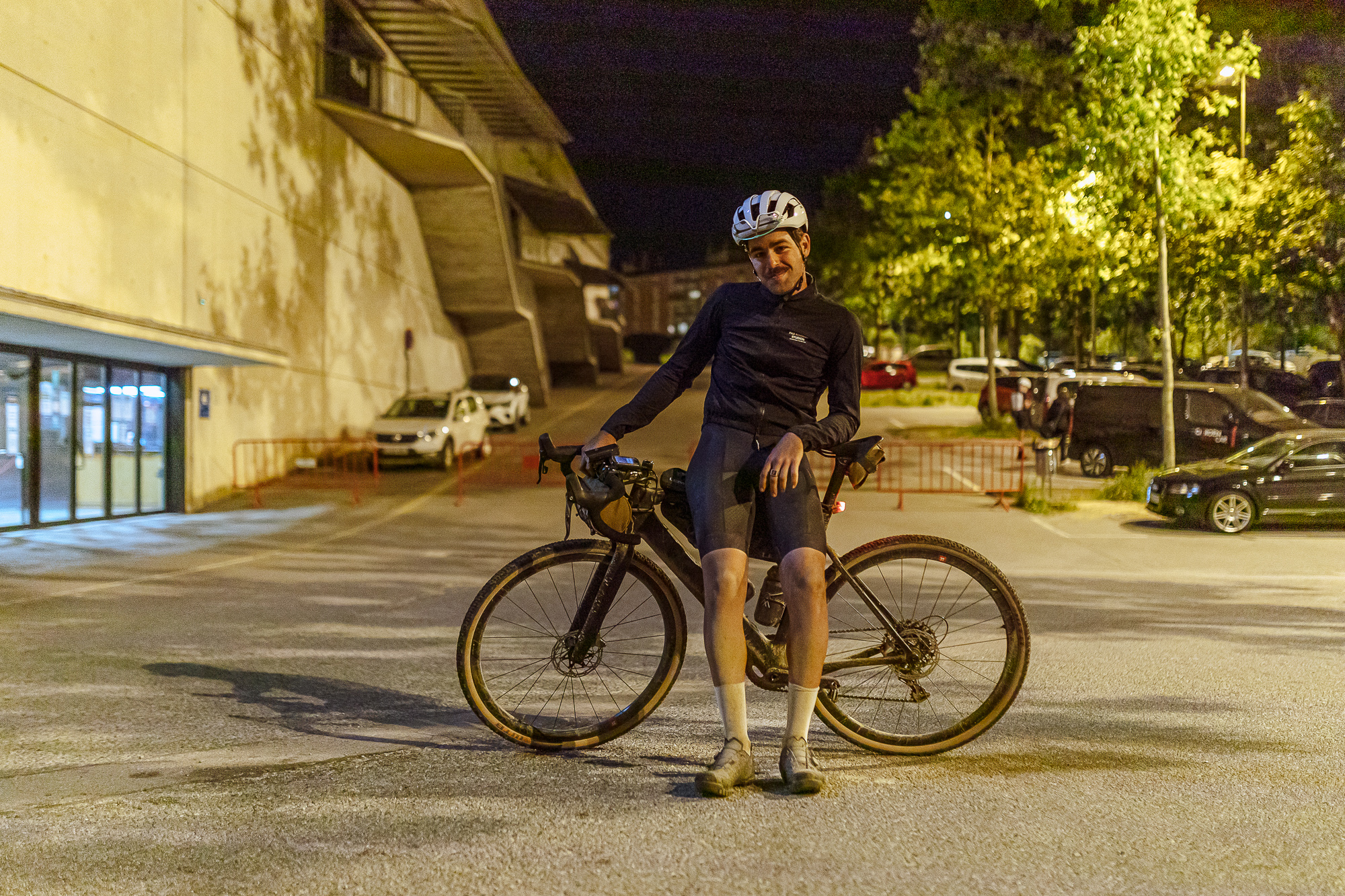 This is my first experience in an ultra-distance event. I have enjoyed it and I am happy to be able to tell you this story through RAW Cycling Mag.

It would be weird to say today that gravel is…