There is a new addition to the already extensive portfolio of products of Hunt Bike Wheels. The new 32 Aerodynamicist UD Carbon Spoke Disc wheelset, with ultralight Aerodynamicist rims and UD Carbon Spokes, has everything that a climber needs to fly up the mountains yet maintain the stiffness and command of a deeper carbon wheel when leaning hard on descents. 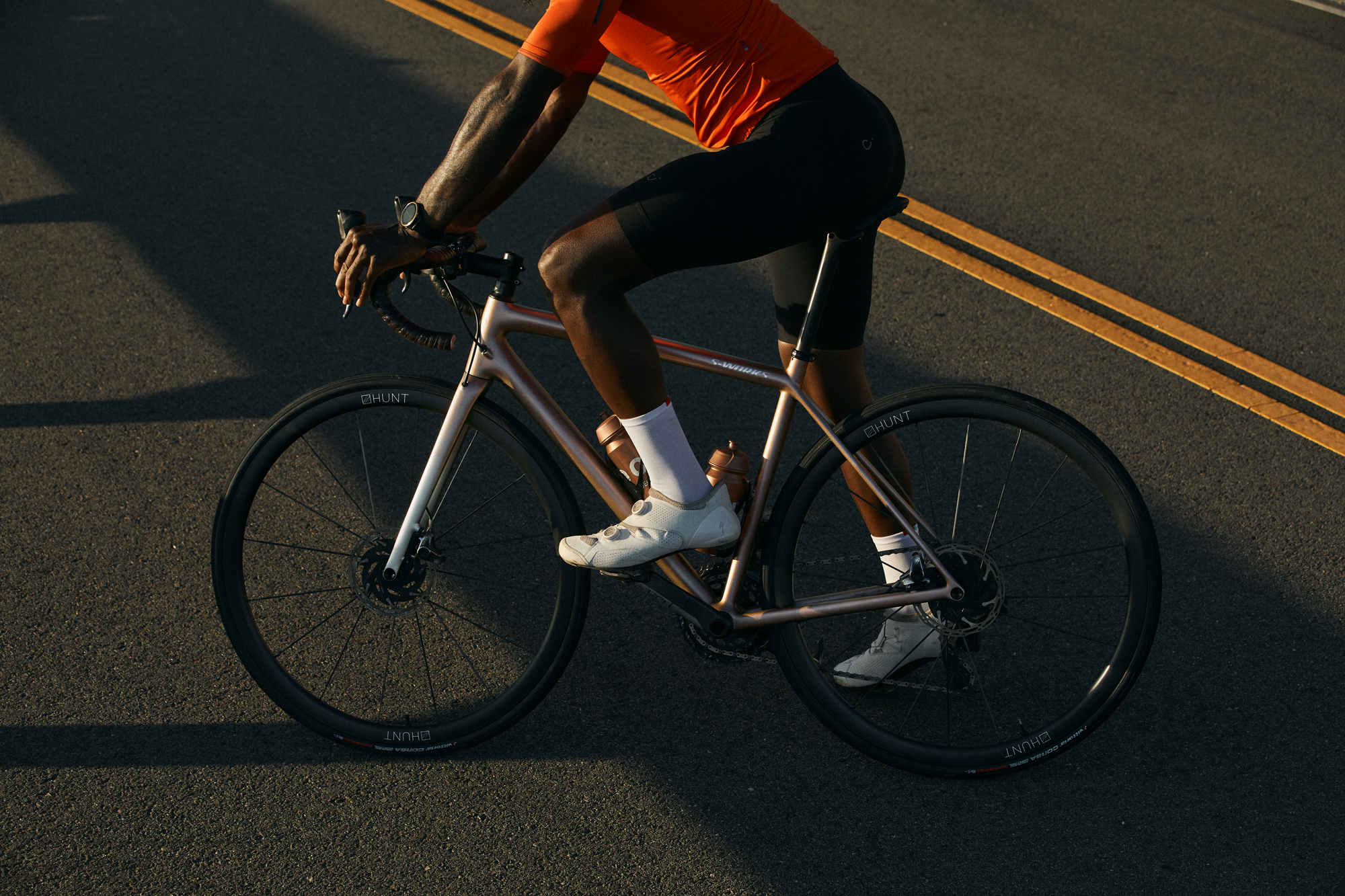 The wheel manufacturer has continued its steady growth since our review of some of their previous wheelsets launched, and they have used their increased exposure to test the early prototypes of this new model at the 2021 Tour de France and Vuelta a España. On big climbing days riders tend to ride the shallowest rims they have available to reduce weight, and the pros from Team Qhubeka-NextHash were the first ones to check the features of this wheelset.

The main novelty of the HUNT 32 Aerodynamicist UD Carbon Spoke Disc is the hookless side-wall rim, designed to provide the lowest possible weight while maintaining strength and reliability. A hookless rim has straight, vertical sides, without the bead hooks that help retain conventional clincher tyres under pressure. According to Chris Colenso, Development Engineer at HUNT, a hookless rim design enables them to save 18g per rim and reduces rotational mass. As well as having that performance benefit, due to a simpler manufacturing process, hookless rims can be produced with less waste, resulting in a cost reduction that can be passed on to riders.

Furthermore, hookless rim profiles enable a smoother transition of airflow between the tyre and the rim, and therefore reduce the wake behind the rim, resulting in lower drag.

Another of the features that make these wheels so special is the spokes. With carbon spokes having a higher stiffness-to-weight ratio, you can either achieve much greater responsiveness for the given weight, or you can strip weight out with no adverse effects.

As a material, carbon is inherently twice as stiff as steel, and as one-directional fibre can be up to five to ten times stiffer in that direction for the same weight, with a reduced density. Knowing its properties and therefore the potential in using their specially developed carbon fibre spokes as opposed to steel spokes, Hunt wanted to quantify the lateral stiffness performance gains to try to optimize other characteristics of the wheel such as weight or spoke count.

They tested the stiffness of wheels by comparing two rims identical in profile, but one prepared with the carbon spokes. The conclusion of the testing was that, even though the carbon spoked wheel has four spokes less, it is 6% stiffer than a steel spoked wheel, meaning that it is possible to achieve greater lateral stiffness whilst also reducing spoke count and weight with carbon spokes.

Most existing carbon-spoked wheels use adhesive bonding or resin to attach the spokes, making them integral to the structure of the rim, which is not ideal in case of a broken spoke. However, the TaperLock construction method by HUNT has enabled them to develop wheels with carbon spokes that are as usable as steel ones. At the hub end of the of the spoke an aluminium mandrel is placed around the spoke during the curing process, and is pulled tight against the tapered head of the spoke. The rim end of the spoke is fitted in the same way with a threaded steel mandrel, and can be trued using a spoke key on a nut from within the rim bed.

The Sprint SLC weight less but retain the same durability and strength of HUNT’s original Sprint hubs. They come from cold forged series 7000 alloy, have a 7,5-degree engagement and use a leaf & pawl system.

With newer ETRTO guidelines, the variances between tyre and wheel manufacturers’ “tubeless standards” have been reduced, so the compatibility problems that worry riders should not be a problem anymore. The HUNT 32 Aerodynamicist UD Carbon Spoke Disc is designed to be used with 28mm tubeless tyres, and the maximum tyre pressure should not exceed 72 psi (5 bar).

The rim has an external width of is 25mm, with an internal width of 21mm. The profile is designed with a truncated airfoil shape and rounded U-shaped profile, which in turn minimises drag by helping airflow stay attached longer as it passes over the rim.

The output of the project led by Luisa Grappone is a wheelset weighing 1.213 grams, The HUNT 32 Aerodynamicist UD Carbon Spoke Disc are now available for pre-order, with the estimated delivery date being the fourth week of May.

The world of cycling is dominated by three materials: steel,…

It is not surprising to realize that we are most…