The Inca Divide organized by BikingMan is probably one of the most challenging and fascinating ultra-cycling races of the world, starting and finishing in the coastal city of Trujillo (Peru). The race is going on from the coast to the desert of dunes through the high altitude of the White Cordillera. 1.650 km with a cut-off time set in 10 days, facing all kinds of complex obstacles and difficulties of an endurance race like a huge amount of kilometers, lack of sleep, bad weather, high altitude, hard gravel tracks, and few places to stop and refuel energy.

A spiritual trip through the ancient Inca Empire territory, a place with plenty of breathtaking views of the Andes Cordillera. The variety of the terrain is enormous, mixed paths with gravel and asphalt, 10 days of a journey in the heart of Peru.

To get an inside view of this tough race, we have contacted Cesar Delong, a Brazilian professional photographer since 2014 and specialized in covering outside sports competitions, with a special interest in photographing downhill races. He stepped into the Inca divide adventure together with his friend Leo Boi (videomaker), with the idea to follow the Brazilian athletes and cyclists Rafael Oliveira and Breno Bizinoto, who was racing in this madness of race. 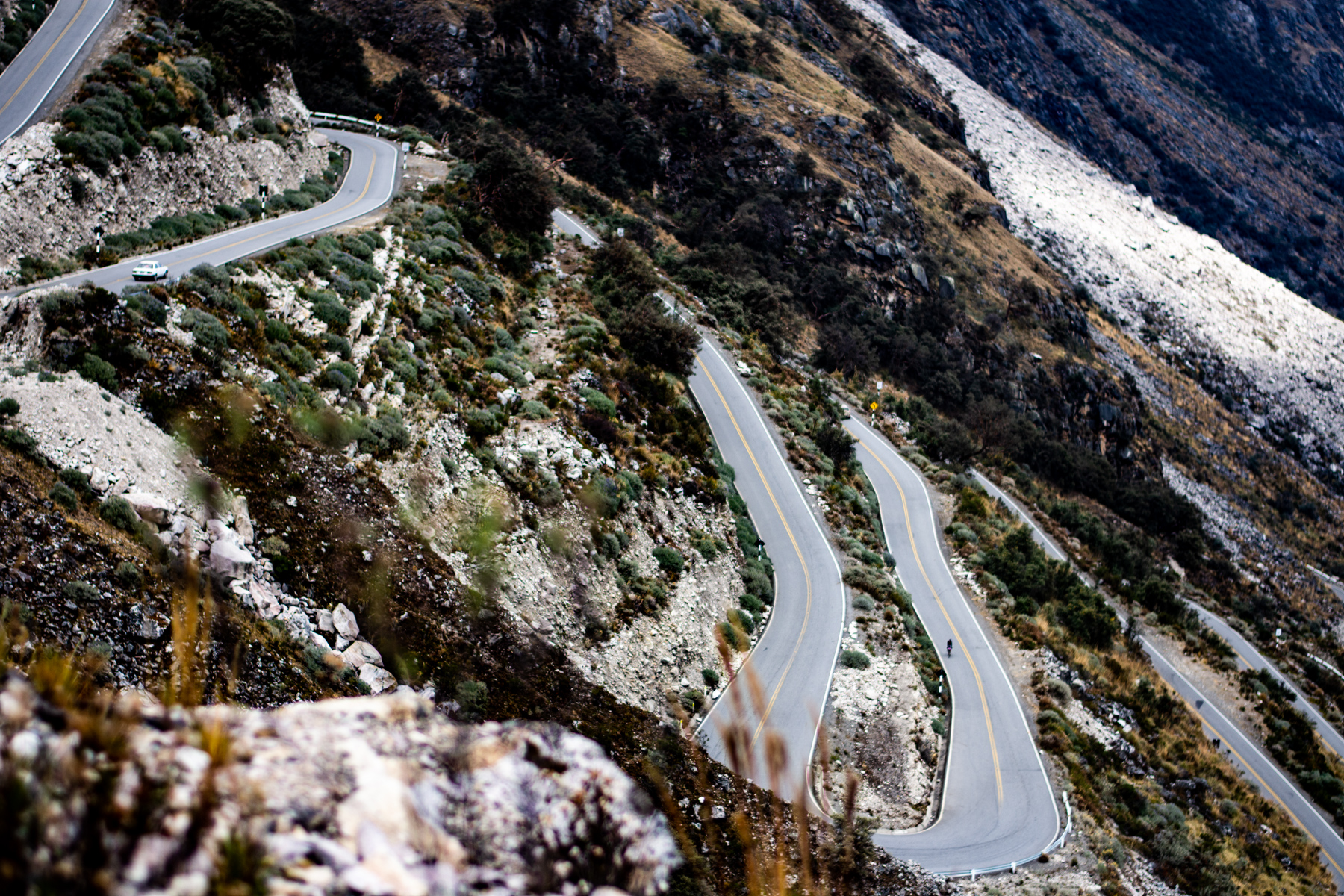 I liked biking since I was a kid. I remember being 6 years old and trying to ride a 26-inch rim of my father and crashing on the floor, but over time I learned. I started in BMX very early, followed by urban (street) and in mid-2010 I started to practice downhill with friends in my city. The need for someone to record the training arose, so I took a compact camera and took my first photos, little by little I ended up falling in love with photography. I became a professional in 2014, starting to photograph the Downhill Paranaense and publishing articles on the Pedal website.
I like all sporty slopes, short climbing, pedali0ng, staying free in nature as much as possible. Everything that involves this makes me feel good, I don’t like being stuck in routines or in an office, which is super stressful for me. Living free is my lifestyle and it’s even more enjoyable to earn money with it.

Tell us about your experience at Inca Divide, an experience like this is not only very hard for the participants, to make media coverage of an event like this, it has to be complex

It was the toughest experience that photography gave it to me so far. It was many days in a row at altitudes not common for Brazilians, above 3000m some days. The question of not having a schedule that we were sure would be followed was complicated. During the days we decided where we would eat, stop, sleep, etc. On the other hand, it was the most beautiful event I worked on because nature is just breathtaking, the people, and culture there are incredible and something unique. An experience that I will take for a lifetime, personal and professional.

¿What was your photo set up for the trip?

Perhaps what we all know about Peru is little more than its Andean side. What were you able to live off during your coverage of the Inca Divide?

Amazing country, I would like more people to visit them and experience what I have been through. They have more different things compared to what we have in Brazi, for example, the food, the lodging, the traffic, sometimes chaotic, It is curiously that unfamiliarity that encourages us every day, facing such an adverse situation is good for improvement.

Work in a place like this, completely different from what you’re used to is very nice because it takes you out of the comfort zone. The Peruvian people are very charismatic and full of particularities, the clothes are a differential and the landscapes are awesome. About the food, it’s cheap, but you’ll spend days eating the same thing. I couldn’t stand to eat Pollo or Lomo a lo Pobre anymore, dishes that were even tasty, but that made you sick on the fifth day, although in big cities things changes, Although the race went through some inhospitable places, I didn’t have many options to be able to taste the culture.

What is the picture of this experience that means something special to you or would you stand out from the rest?

It’s a picture of me and it’s about what was said above, I felt free every day, I felt light and peaceful. Despite all the fatigue of work, at every moment we thanked each other for living that perhaps a unique moment in our lives.

Every mountain we climbed we were thrilled. Many moments we were afraid because of the bizarre roads with little structure next to cliffs, but at the same time, there was so much good energy coming from that horizon and… its hard to explain. A singular beauty that you can only find in South America. 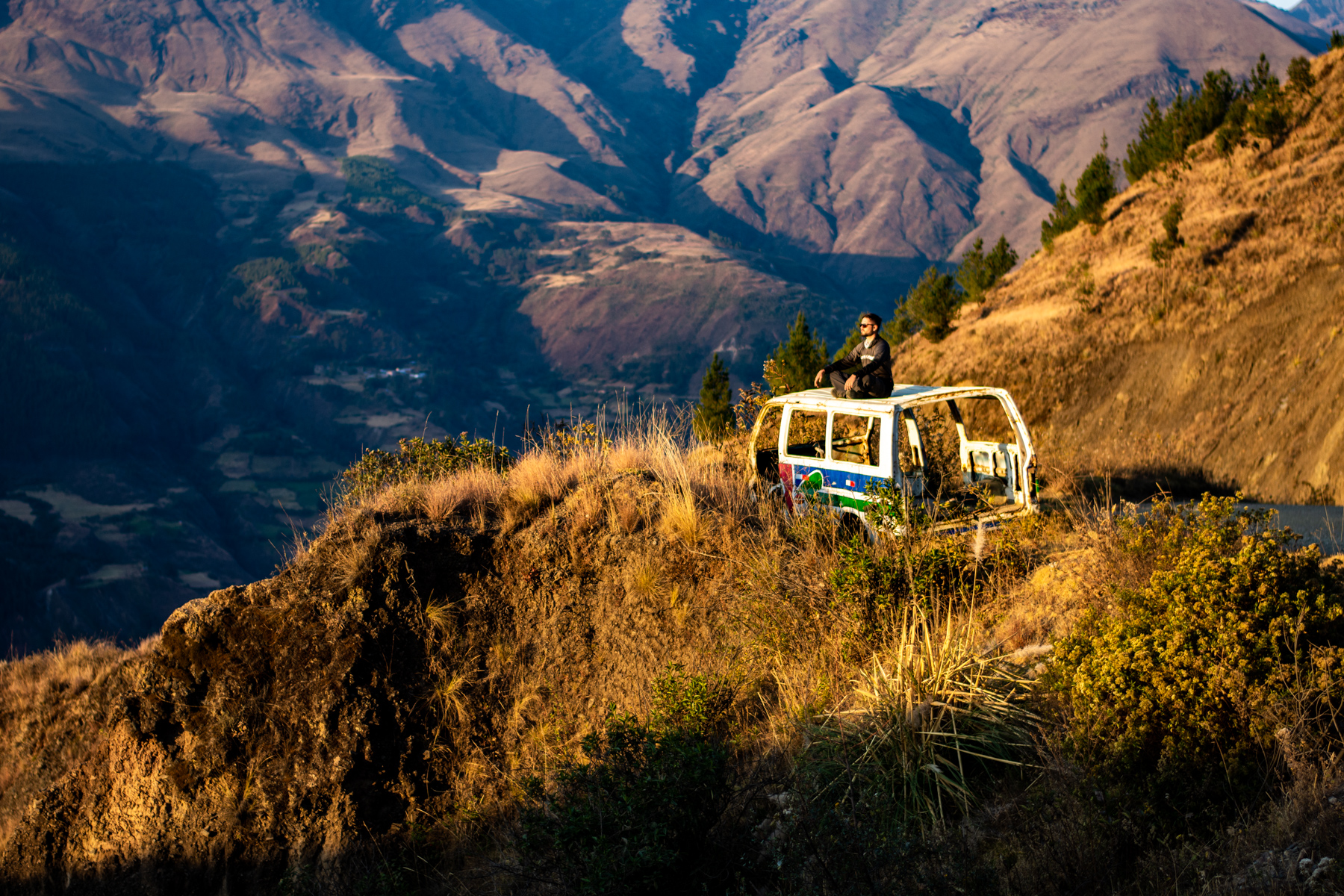 Please explain to us any spill or anecdote from the trip.

On the sixth day, we ripped a tire from the car, there was no way to buy another one or fix that tire in the middle of nowhere, it was a bit scary to continue the journey without a backup.
Another day, near Machu Pichu, we were in the middle of nowhere, lost, really! A few hours later, without a phone signal, we exchanged wifi for drone photos of the village with the locals, an iconic moment.

Cesar, a final thoughtfulness for our readers on what you experienced

think I can’t name one reason for us to do all of it, to risk our lives in such a difficult experience, but the only thing I can say is that we will never stop. The truth is, we love everything about bikes. It’s the journey, the people you meet, the experiences, learning, evolution as a human being.
The part of taking the picture and editing is just a mere detail.

One more experience to the bucket, another favorite route in…