Many of us have a very good memory of the time when events such as alleycats, bicycle messenger races, or fixed gear criteriums were organized everywhere. During those years, and partly thanks to RedHookCrit and brands like Dosnoventa, Barcelona was one of the central points of the movement. However, we were left with a bittersweet feeling and we cannot help wondering what happened to the most underground and carefree cycling scene? We found an answer while speaking with Germán from Prblms, a ‘cycling gang’, as they define themselves, who are not only trying at all costs to keep the flame alive but are also doing many actions to grow. 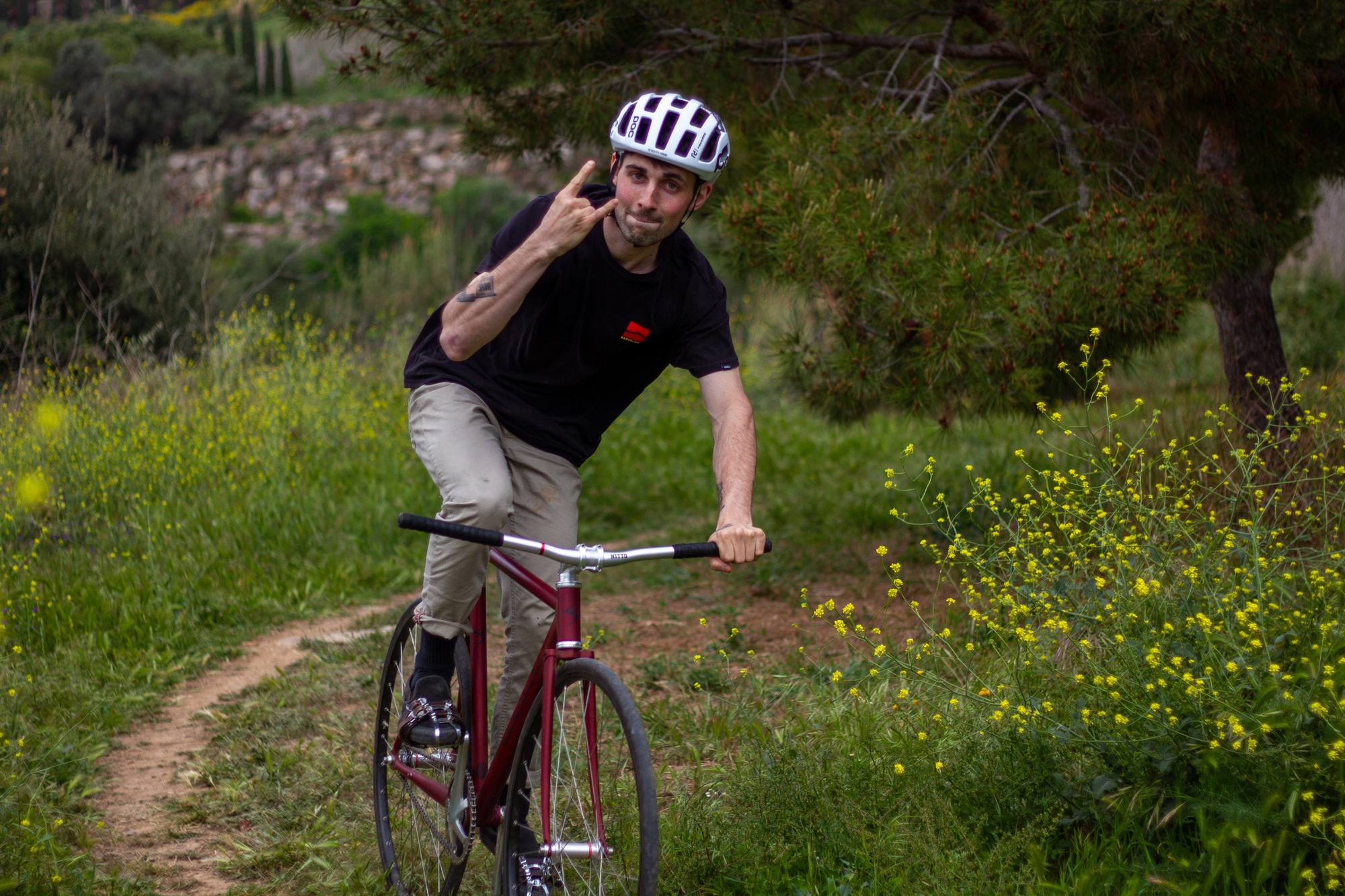 With a vision of cycling totally separated from the professional world, Prblms is a group of friends who, in 2019, decided to put on a label and start transmitting their way of interpreting cycling to the rest. For them, the bike is a way of socializing, being among friends and making new ones, discovering new places, laughing, having fun, and, above all, distancing themselves from the professionalized and serious style of the amateur world that we sometimes see in this sport.

Based on the My Beautiful Parking bikeshop, you can often find them organizing rides and, although at the moment they are a closed group if you ask them you will always be welcome to join them. Even though the fixed gear is their favorite discipline, whether it is to move around the city or to go on long rides out of Barcelona, ​​from time to time they also go out on gravel bikes to the mountains or even organize small bikepacking trips.

Our aim is to strengthen the fixed gear community by creating a social group and organizing activities. We do not believe that this is a fashion but instead a way of doing things. For us, cycling is above all of that.

Their main objective as a group is to promote the fixed gear since, in the end, it is what brought them together. There will not be as many fans as there were a few years ago with RHC, but Germán tells us that every day there are more people in the city riding fixed and that is why they continue to bet on it. A couple of years ago, Germán attended the tracklocross world championships in Japan, an even wilder version of fixed gear criteriums, basically bikes without brakes and with wide tires to be able to go through cyclocross courses. There, he met the guys from SQUID bikes and, delighted by the event, the atmosphere around it, and how fun the race was, he decided to propose Barcelona as the next capital to host the world championships. Thus, with the intention of promoting this discipline, creating a tracklocross community in Spain, and having fun, several events have been organized in Barcelona in the last few years. A few weeks ago Prblms organized their first tracklocross event, which they called ‘Tractorcross’ and it was a huge success.

We want everyone in the peninsula to be aware of tracklocorss, because this will grow. First, organizing a national league to unify the community, and then focusing on the World Championships.

The date chosen for the race was not accidental, it was 9th May 2021, the same day the emergency state in Spain ended. After months of restrictions, people were eager to get out of their house, so the organization of the race would be the perfect time to enjoy a day out, be with friends, race a bit, and have a few beers.

Similarly, the circuit was not chosen at random, the Montjuic mountain would be the place to host the event. This is the circuit where the first tracklocross was organized in Barcelona a few years ago, and with this, they wanted to pay a small tribute to that beginning.

The event was not limited to fixed gear bikes, everyone was invited to what would be more of a social event. However, two categories were organized: true tracklocross without brakes and fixed gear bikes, and bikes with brakes and freewheel. The course was not very long, but it was quite demanding with several interesting points with a climb, descent, obstacles, and dry terrain. The participants, around 30, competed in several elimination races, where from 5 runners 2 qualified for the next round. Germán won in the fixed category and Kevin in the freewheel category. The prizes were contributions from MBP, MestreCiclista and Terpy.

Very satisfied with the event, the Prblms team told us that there were around 70 attendees and that from all the 300 beers they bought, not a single one was left. The event was not something local, but boys from Madrid also joined the party. In addition, they had two cargobikes in which they brought all the material, a speaker for the music, and even a stand to make tacos.

Comparing Tractorcross to other events such as the World Championships in Japan or the races in Italy, Germany, or California, Germán tells us that the circuit may be different since the dry terrain of California or Barcelona is not the same as the one in Japan, but that the environment and the essence are the same. A feeling of happiness prevails among equals, people wanting to have fun who are happy to be there either cheering up or participating. However, being a relatively new discipline that comes up spontaneously every time, except for the kind of bicycles, there are no precise rules, and each one organizes it in their own way.

The organizers have realized that the movement, though slowly, is growing and more people are joining the fixed gear category in the events. So, with more tracklocross fans, they are already planning new races and special events. One of these will consist of a mountain alleycat through Collserola, where there will be no fixed track, as was the case of Geocentum, and fixed bikes will be preferred.

Over the years, when we hear the name Eroica a…