To finish an ultracycling event is already an achievement, and being able to win one of them is something that only a few can say. Then there is Ulrich Bartholmoes, who has claimed the victory in every single race he has participated in since his debut in the discipline.

Ulrich Bartholmoes is a German ultracyclist that started taking part in Gran Fondo’s back in 2014, and after racing week in, week out for a couple of summers, he realized that the longer and tougher the races, the better he performed. 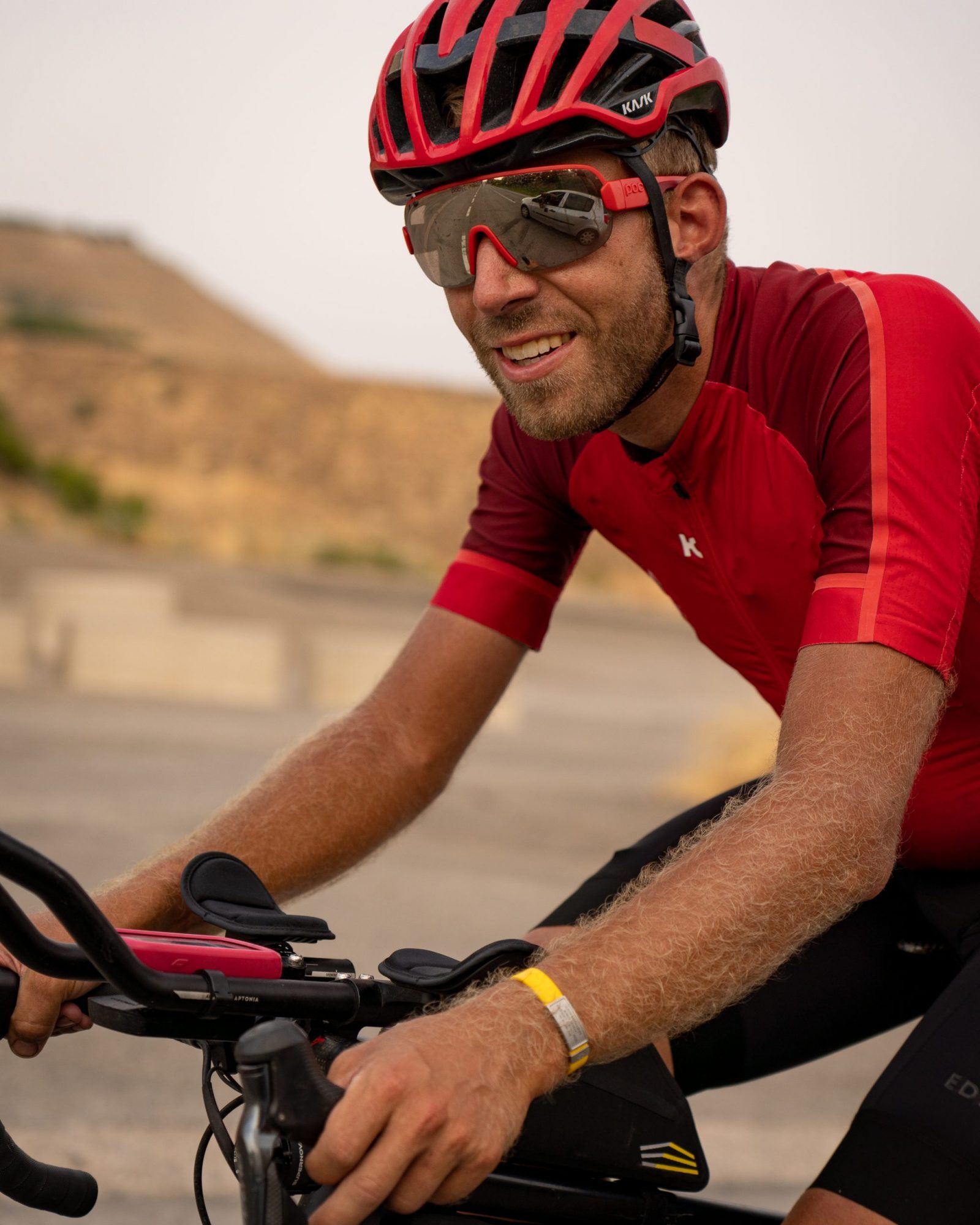 This natural progression led him to take part in races like the Tour de Mont Blanc, an event with around 350 km and 8.500 m of elevation gain. That was of course not a regular sportive, but it was still a one-day challenge.

He wanted to compete in that race again during the summer of 2019, but at that moment he was on holiday in Spain and it was not practical to go all the way to the start line in Eastern France, so he started looking for race alternatives. He discovered the Transpyrenees, gave it a try, and did not stop taking part in unsupported multi-day events since then, although he still finds time to run his own company, specializing in business consulting for IT projects.

As you can imagine, ultracycling races involve spending the night outside and relying on what you carry on your bike. A few months before his debut in the discipline he bought his first bikepacking gear, but only with the intention of carrying cycling tools and spare parts. He started going on multi-day adventures but was still sleeping in hotels, so the Transpyrenees was his first proper bikepacking experience.

Two years later, he can proudly say he has won every single ultracycling event he has started, with the 2021 Transibérica being his latest success. The winning streak currently sits at eight, and given the domination he shows every time he lines up for such challenges, we will probably see him as the first finisher of these events for a long time.

An eventful win in the Transibérica

If during his first win in the Transibérica he and the other participants had to tackle a big loop of the Iberian peninsula, this time the route was more focused on the north and center of Spain, which probably facilitated the job of the race organizers. There were certain highlights that featured in both the 2019 and 2021 editions like the Picos de Europa in Asturias, but Ulrich discovered new places that delighted him, collecting very special moments along the way. Reaching the top of a climb just in time for sunrise, passing by lunar landscapes, visiting picturesque villages… Given the distance of the race and the diversity of the peninsula, Ulrich and the rest of the participants could taste what Spain has to offer.

As the winner of the race, Ulrich Bartholmoes enjoyed some beautiful moments in the course of the 6 days, 14 hours, and 13 minutes that took him to cover the 2.953 km of the race, but during that time he had to face some difficult and stressful moments too. He suffered a big mechanical problem before reaching Checkpoint 5 that made him stop for more than 20 hours, but the temperance and serenity of his actions allowed him to get back on track and win the race.

Ulrich told us that while he was in the Girona area training in the weeks leading up to Transibérica, he broke the rear derailleur and damaged some spokes and the pulley wheel cage. He managed to fix it in time but that was clearly an added stress before the race.

Already in the race, during a small climb, the derailleur snapped again. “I guess it was caused by mounting a bent cage in the new derailleur”, he argues. It happened at 21:00 in the middle of nowhere, so he didn’t even have cellphone signal to check where he was. He dismounted the derailleur completely to be able to at least push the bike, and he had to walk around two kilometers before being able to know where to go. On his way to the nearest village, a car stopped and offered to take him there.

He took shelter in one of the rural houses of the village, enjoyed a nice barbeque, and even had a beer.

“During that evening I was not really thinking about the bike. Everything was closed so there was no way I could get it fixed then. I preferred to lay down and rest.”

At that time he informed the race organizers about his incident. They and several dotwatchers had started to worry after seeing that his tracker was not in the route, so he sent them a short message saying that he had a serious mechanical but that he wasn’t in trouble.

The next morning he took a taxi to Guadalajara, the closest city. His main goal was to find a new derailleur, and if not, a new bike to get to Bilbao in some way. Returning by train never crossed his mind. There were no spare parts in the local shop, but they cut the chain to single-speed, so he could at least start moving. Then his idea was to get a train ticket to Madrid to get it fixed there, but missed the train by a minute.

It seemed that the world was against him, but he remained calm and headed to the closest cafe to have some food. When he was putting his bike against the wall, the guy from the bike shop arrived with his car and told Ulrich that he had managed to find a replacement for his derailleur. They went back to the shop and half an hour later he was back on the bike.

After falling to 8th place in the classification, Ulrich started his impressive comeback, getting back to the front of the race after Checkpoint 5. He only came across a couple of the riders he overtook, whether because he followed a different route or because the others were resting while he was pushing the pedals. He was happy to see Pawel Pulawski, who was at that moment leading the race and was aware of what happened. They had a similar planned route and rode together all night, parting ways after sunrise. At the finish line, Ulrich won by a margin of 12 hours.

His physical talent is complemented by a remarkable mental strength. Unlike most athletes, Ulrich prefers not to rely on caffeine when looking for a boost of energy during races. “I believe caffeine changes how your body reacts to its needs. If you are tired, you should not take these substances to avoid fatigue because it can be dangerous”, he argues. The German also limits the time to listen to music or podcasts, saving it for specific moments, like a long straight in the middle of the night.

The horrific crash of a friend

Unfortunately, there was a big accident during the event involving Ana Orenz, a good friend of Ulrich. She collided with a wild boar during the first night of racing and sustained life-changing injuries. She was unconscious after the crash and it wasn’t until two other participants found her that she could be transferred to the hospital in Pamplona. Ulrich’s wife told him that her tracker had stopped during the night, so he asked the organizers what had happened. At that moment it was still not clear, but Ulrich did not think she suffered any serious injuries.

During the time he stopped due to his mechanical issue, he even texted Anna, and given that she replied back encouraging him to win the race, he was confident that everything was fine. It wasn’t until after the finish line that he was told what really happened.

“Most of us also took that descent. It was on a very wide road with good tarmac. She wasn’t sleep-deprived whatsoever, so it was really bad luck. That shows that anything can happen to us, and that is scary.”

Ulrich Bartholmoes is currently focused exclusively on road races, but that will change soon. He has already done sprint distance races like the Two Volcano Sprint, events that are around 2.000km long like the Three Peaks Bike Race, and longer ones with Transiberica as an example. Now it is time to spice things up and give a try to different types of ultradistance races. “I have seen a lot of things on the different roads I have passed by, but now it is time to explore more remote regions”, he says.

Ulrich was planning on going on some off-road adventures on his own and only then consider lining up in a gravel or mountain bike ultracycling race. Nonetheless, we can reveal that he will take part in Badlands, which starts this weekend with riders like Sofiane Sehili, Alistair Brownlee, and Freya Rawlins.

Friends of Ana Orenz have set up a donation page to help her during the long road ahead involving months of physical therapy and other unforeseen costs. Her daughter Ruby is now in charge of her Instagram account and will post updates of Ana’s progress.